The U.S. news media is in harness again, pulling the latest bandwagon for war, this time with Iran. So, Americans should expect soft coverage of U.S.-Israeli provocations of Iran and media outrage over any Iranian retaliation, as the Independent Institute’s Ivan Eland explains.

When Iran haplessly and publicly vows revenge and retaliates, as it purportedly has with ham-handed attempts to assassinate the Saudi Arabian ambassador in the United States and car bombings of Israeli embassy personnel in the countries of India and Georgia, it allows Israel and the United States to further hype the limited Iranian threat to either country. By inflating the threat, both countries can better justify any future military strike on Iran. 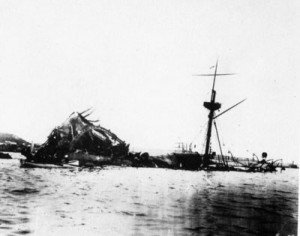 USS Maine, which exploded and sank in Havana Harbor in 1898, touched off the Spanish-American War

Contrary to popular belief, the data show that democracies don’t go to war any less frequently than autocracies. But when they do, unlike authoritarian regimes, they need to win public support for the war effort by attempting to show that their opponent started the dustup. In American history, there is a rich tradition of tricking enemies into starting conflicts.

Before the Mexican War, President James Polk blockaded the Rio Grande (an act of war), sent troops into disputed territory on the Texas-Mexican border to which the Mexicans had a better claim, and falsely claimed that the Mexican response had killed American soldiers on U.S. soil. In reality, Mexico had refused to sell what is now the southwestern United States to Polk, so he decided to beat up on a weaker country and steal one-third of its land by armed force.

In 1861, Abraham Lincoln could have withdrawn federal forces from Fort Sumter, which had no military value, as all of his senior military advisers had advocated, and pursued a compromise with South Carolina and other seceding states. Because an earlier resupply ship and a wayward merchant ship had been fired on by Confederate batteries in Charleston Harbor, Lincoln knew exactly what would happen if he tried to resupply, instead of evacuate, the fort.

In fact, to make sure the Confederates wouldn’t miss the chance to start a massive Civil War, Lincoln announced to them that a resupply mission containing only food was on the way, instead of trying to secretly slip the supplies through to the fort. Lincoln even admitted that he was trying to provoke the Confederates to start hostilities, by firing upon bread, in order to win over world and Northern public opinion.

Despite protests from the leading naval commander on the scene that the explosion on the U.S. warship Maine didn’t happen because of foul play (which recent research has supported), the U.S. government falsely blamed the Spanish, thus contributing to war hysteria in the United States. The Spanish-American War ensued.

In 1941, long before Pearl Harbor, President Franklin Delano Roosevelt tried to provoke Adolf Hitler into declaring war on the United States by actively helping the British to sink German U-boats in the Atlantic Ocean. Hitler refused to take the bait until his ally, Japan, bombed Pearl Harbor.

FDR knew it was likely that Japan would attack the United States somewhere. FDR had cut off Japanese oil supplies, motivating them to invade what is now Indonesia, which was oil-rich. But the U.S.-occupied Philippines would threaten their line of supply. So Japan attacked the Philippines and the U.S. naval base at Pearl Harbor simultaneously.

In 1964, the U.S. was secretly raiding the coast of North Vietnam. The North Vietnamese were then alleged to have launched, with patrol boats, two retaliatory attacks on U.S. destroyers in the Gulf of Tonkin. The second alleged attack was nonexistent. Nevertheless, President Lyndon Johnson ordered retaliatory airstrikes, got Congress to pass the Gulf of Tonkin Resolution providing an open-ended authorization for hostilities in Southeast Asia, and then escalated the Vietnam War.

In other chicanery, President Ronald Reagan invaded the island of Grenada to “rescue endangered medical students.” The students were hardly endangered; Reagan’s real intention was to remove a pro-communist government.

During the first Gulf War, President George H.W. Bush claimed that Saddam Hussein, who had invaded Kuwait, was massing troops to invade the crown jewel of the oil world, Saudi Arabia. This claim was used to justify sending U.S. troops to Saudi Arabia and eventually to attack Iraq. The problem was that Soviet spy satellites and the Saudis’ investigation of their border with Iraq and occupied Kuwait discovered no Iraqi troop buildup there.

And we all remember the second Gulf War, in which President George W. Bush used the threat of nonexistent weapons of mass destruction to justify the invasion and occupation of Saddam’s Iraq.

Thus, given America’s rich history of goading its foes into warfare, watch closely for continued Israeli and U.S. attempts to provoke Iranian countermeasures, which then could be used to help justify a future military attack.

11 comments for “Beating the Drums of War, Again”