After a decade of “war on terror” rhetoric and President Obama’s failure to reverse many of George W. Bush’s extrajudicial policies the U.S. public has come to accept that American “exceptionalism” puts the nation beyond the reach of international law, as Nat Parry explains.

Whether they realize it or not, Americans are increasingly embracing policies that undermine the international rule of law, with self-identified liberals, in particular, seemingly reversing their positions on matters such as the Guantanamo prison camp, extrajudicial assassinations and arbitrary detention.

While just six years agothe U.S. public ranked among the world’s most enthusiastic supporters of international law (falling just behind the Germans and the Chinese in global surveys), it now appears that vast majorities of Americans reject the applicability of international law when it comes to the actions of the U.S. government in the “global war on terror.” 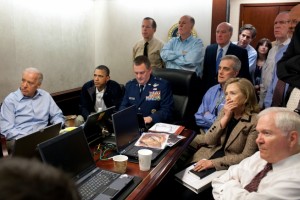 A recent Washington Post-ABC News poll, for example, found that 70 percent of the American public approves of the U.S. government’s decision to indefinitely keep the Guantanamo prison open, despite widespread international condemnation of this policy.

This figure includes 53 percent of self-identified liberal Democrats and 67 percent of moderate or conservative Democrats, “even though it emerged as a symbol of the post-Sept. 11 national security policies of President George W. Bush, which many liberals bitterly opposed,” noted the Washington Post.

In fact, the Post-ABC findings indicate an almost complete reversal of American attitudes on this subject across the political spectrum since the years of the Bush administration. The most pronounced difference has become noticeable in just the past couple years.

In a 2006 poll, for example, 63 percent of respondents said the United States should follow international conventions regarding Guantanamo Bay, while just 30 percent said the U.S. should not be bound by these obligations. The survey also found that Americans generally support giving international courts broad authority to judge U.S. compliance with treaties, with 70 percent rejecting the idea that the United States should receive exceptional treatment under such treaties.

Yet, this is precisely what the U.S. has been doing for over a decade at Guantanamo Bay. On last month’s ten-year anniversary of the prison camp opening, there was a flurry of renewed criticism over the continuing violations of international law by the United States.

“We have also called for investigations of US officials implicated in torture of terrorism suspects and for adequate compensation for detainees who were mistreated. Human Rights Watch will continue to press for compliance with these obligations. Failure to do so does enormous damage to the rule of law both in the US and abroad.”

Arbitrary detention, however, isn’t the only area in which Americans are increasingly willing to disregard principles of international law. Regarding torture, a survey conducted last year by the American Red Cross found that 59 percent of American teenagers and 51 percent of adults believe that it is acceptable to torture enemy fighters in order to attain important military information.

Further, 37 percent of youth support “Depriving civilians in combat areas of food, medicine, or water in order to weaken the enemy,” a war crime that is also supported by 29 percent of adults. A whopping 71 percent of youth and 55 percent of adults support “Refusing to allow prisoners to be visited by a representative from a neutral organization to confirm that they are being treated well.”

Extrajudicial assassinations are supported by an even broader majority, with the new Washington Post-ABC News poll finding that 83 percent of Americans approve of the use of unmanned aerial drones to carry out targeted killings of terrorist suspects without due process.

This is despite the fact that Philip Alston, the United Nations special representative on extrajudicial executions, has raised alarms that President Barack Obama’s drone strikes “pose a rapidly growing challenge to the international rule of law.” In a 29-page report to the United Nations Human Rights Council presented in June 2010, Alston called on the United States to exercise greater restraint in its use of drones in places like Pakistan and Yemen.

“They are increasingly used in circumstances which violate the relevant rules of international law,” Alston said. “The international community needs to be more forceful in demanding accountability.” He elaborated:

“I’m particularly concerned that the United States seems oblivious to this fact when it asserts an ever-expanding entitlement for itself to target individuals across the globe. But this strongly asserted but ill-defined license to kill without accountability is not an entitlement which the United States or other states can have without doing grave damage to the rules designed to protect the right to life and prevent extrajudicial executions.”

Last month, Obama for the first time admitted that the U.S. is carrying out drone strikes in Pakistan, and in response Amnesty International immediately requested clarification from the administration on the drone program’s legality.

“The US authorities must give a detailed explanation of how these strikes are lawful and what is being done to monitor civilian casualties and ensure proper accountability,” said Amnesty International’s Sam Zarifi on Jan. 31.

“What are the rules of engagement? What proper legal justification exists for these attacks? While the President’s confirmation of the use of drones in Pakistan is a welcome first step towards transparency, these and other questions need to be answered,” Zarifi said.

So far though, it doesn’t appear that the administration has felt the need to reply, perhaps because it knows it has nothing to lose politically by disregarding these commitments on human rights and international law.

As the Washington Post pointed out, even though “Obama campaigned on a pledge to close the brig in Cuba and to change national security policies he criticized as inconsistent with U.S. law and values, [he] has little to fear politically for failing to live up to all of those promises,” due to the fact that his liberal base has reversed its views on these subjects since George W. Bush was president.

Constitutional lawyer and Salon.com blogger Glenn Greenwald has attributed these shifting attitudes to “blind leader loyalty,” pointing out that “during the Bush years, Guantanamo was the core symbol of right-wing radicalism and what was back then referred to as the ‘assault on American values and the shredding of our Constitution.’”

But “now that there is a Democrat in office presiding over Guantanamo and these other polices, rather than a big, bad, scary Republican, all of that has changed,” says Greenwald.

While partisan allegiance and liberal hypocrisy may indeed explain the reversal in attitudes to these policies to a large extent, it is also possible that what the shift represents is a subconscious acceptance by the American people of illegal and immoral policies that they would have rejected out of hand ten years ago.

After more than a decade of the “global war on terror,” and years of legitimization of these policies by the media and an overwhelming bipartisan consensus in Washington regarding these policies, it’s possible that the American public has simply grown desensitized to what arbitrary detention, torture and extrajudicial assassinations really mean, and how out of step with civilized values these U.S. policies really are.

With the Obama administration’s failures to prosecute the worst crimes of the Bush years as well as its continuation of many of the same policies, the U.S. government’s routine violations of international norms has seemingly become normalized to a broad cross-section of the American people.

Nat Parry is co-author of Neck Deep: The Disastrous Presidency of George W. Bush. [Reposted from Compliancecampaign.wordpress.com with author’s permission.]