Exclusive: American neocons have moved the United States closer to war with Iran via a subtle change in the “red line” phrasing, inserting the word “capability” after the usual threats to take out an Iranian “nuclear weapon.” Now, Sen. Joe Lieberman is making the shift official, reports Robert Parry.

Sen. Joe Lieberman is leading a group of nearly one-third of the U.S. Senate urging that the red line on war with Iran be shifted from building a nuclear weapon to the vague notion of Iran having the “capability” to build one. The neoconservative senator from Connecticut has introduced a “Sense of the Senate” resolution that would put the body on record as rejecting a situation that arguably already exists, in which Iran has the know-how to build a bomb even if it has no intention to do so.

The resolution tracks with the positions of hardline Israeli leaders, such as Prime Minister Benjamin Netanyahu, and undercuts the position of President Barack Obama, whose administration has been exploring ways to negotiate an agreement with Iran, which insists that its nuclear program is for peaceful purposes only. 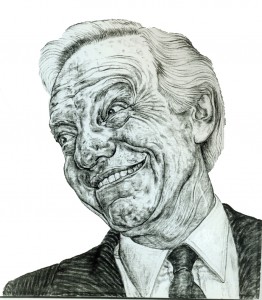 U.S. and Israeli intelligence agencies also agree that Iran has NOT decided to build a bomb. [See Consortiumnews.com’s ““US/Israel: Iran NOT Building Nukes.”] However, in recent weeks, the goal posts have been subtly moved not only by American neocons and Israeli hardliners but by the major U.S. news media, which has inserted the new weasel word “capability” in mentions about of Iran’s supposed nuclear weapons ambitions.

To deny Iran the “capability” would almost surely require a war between the United States and Iran, a course that some neocons have been quietly desiring for at least the past decade when the Iraq invasion was seen as a first step to bringing “regime change” to Iran or as some neocons joked at the time, “real men go to Tehran.”

Since the grim writing was on the wall about the Iraq outcome, American neocons have been looking for new ways to get their imperial agenda back on track, with Iran’s nuclear program just the latest opportunity.

So, Iranian efforts to negotiate confidence-building initiatives regarding its nuclear program, such as agreeing to a Turkish-Brazilian plan in 2010 to trade about half of Iran’s low-enriched uranium for radioactive isotopes needed for medical research, have been blocked by neocons in Congress and their allies in the Obama administration, with the support of key U.S. media outlets, like the Washington Post and New York Times.

The latest shift toward forcing a new war has centered on the insertion of the word “capability” after the words “nuclear weapons.” The Obama administration has indicated that it would consider an Iranian decision to build a nuclear bomb a “red line,” suggesting the possibility of a military strike at that point.

However, that threat isn’t making the neocons happy because the U.S. intelligence community is standing by its 2007 conclusion that Iran halted work on a nuclear bomb in 2003 and hasn’t resumed that effort. Israeli intelligence apparently has reached the same judgment. Both U.S. Defense Secretary Leon Panetta and Israeli Defense Minister Ehud Barak have referenced this state-of-play in the intelligence assessments in recent public remarks, as ex-CIA analyst Ray McGovern has reported.

So, what are the hawks in Israel and the United States to do? Their new sleight-of-hand has been to quietly shift the terms of reference, arguing that it doesn’t matter whether Iran is actually working on a bomb but that it must be denied even the “capability” to work on a bomb. That is the point of Lieberman’s resolution.

In a statement at his Web site, the senator announced that 32 senators both Republicans and Democrats have banded together to introduce a resolution urging action to prevent Iran from pushing “forward in its pursuit of a nuclear weapons capability.  By rejecting any policy that would rely on containment of a nuclear-weapons capable Iran, this bi-partisan resolution sends a clear message to Iran’s rulers that the United States will stop them from acquiring nuclear weapons capability.”

In other words, the next preemptive war could be launched not against Iran for actually building a bomb or even trying to build a bomb but rather for simply having the skills that theoretically could be used sometime in the future to build a bomb. The “red line” has been moved from some possible future development to arguably what already exists.

That group amounts to nearly one-third of the 100-member U.S. Senate.

61 comments for “Lieberman Edges US to War with Iran”