Exclusive: Over the past few decades, many U.S. mainstream journalists have learned to protect their careers by not offending the Right’s powerful attack apparatus. That caution (or cowardice) has now infected coverage of the looming crisis over global warming, as Sam Parry notes.

The U.S. mainstream news media does not seem to have the foggiest idea how serious the climate crisis is (or at least many journalists pretend not to). That is the only conclusion one can infer based on the abysmal track record of climate-related news reporting.

A recent eight-paragraph story in The Hill, a Capitol Hill newspaper,  helps illuminate the point. It cites what is called “a new tactic” among Republicans for scuttling the Environmental Protection Agency’s greenhouse gas rules demanding that the White House to block them. 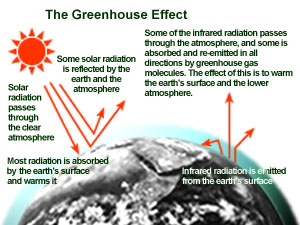 The article quotes House Energy Committee Chairman Fred Upton, R-Michigan, as telling President Barack Obama’s Office of Management and Budget that “further increasing electricity costs by requiring commercially unproven technologies, or forcing a transition away from coal, will send thousands more U.S. jobs overseas at a time when the nation can least afford it.”

The article also quotes another letter by two other senior Republicans, Joe Barton of Texas and Ed Whitfield of Kentucky, regarding EPA’s alleged “use of costly technologies.”

There is a line in the article saying “EPA has pushed back against GOP and industry attacks on its plans, calling them inaccurate and arguing that it is taking measured steps to fight global warming” and the story goes on to offer some details about where the EPA rules stand. However, The Hill omits any background on the looming crisis of global warming.

And, sadly, this story’s lack of climate crisis context is only too common in mainstream media coverage of global warming. This is partly why the American public isn’t screaming at their political leaders to take the climate crisis seriously.

Reading the story, you get little sense of why EPA is developing these rules or why we would need to limit greenhouse gases. Nor would the reader know that Republicans are mostly responsible for blocking any effort over the last quarter of a century to limit America’s climate pollution?

Readers aren’t even given the basic context that the EPA is legally obligated under the Clean Air Act and the Supreme Court’s 2007 “Mass vs. EPA” ruling to limit global warming emissions.

The tone of the article is also noteworthy. By choosing to frame this story as House Republicans trying yet again to block EPA climate action, the subtle impression created is one of dutiful members of Congress doing their darnedest to rein in the Obama administration’s excesses.

Though one might say it’s just one story in one news outlet, the larger problem is that this kind of reporting is all too typical in the U.S. mainstream media when it comes to climate change. Numerous studies over the years have examined the mainstream media’s inability to grapple with the severity of the threat posed by global warming. Several flaws have been identified, among them:

–Mainstream journalists tend to exhibit a lack of scientific understanding, either of the scientific process or of scientific research, methodology, and findings.

–Mainstream journalists tend to shift the focus of their coverage and reporting from what the science says to how ordinary people and political leaders are debating the science. This flaw, apparent in The Hill story, frequently overuses the “political horserace” framing that fails to tell the broader climate crisis story.

–Mainstream journalists attempt to achieve a false “balance” by quoting the views of non-scientists and/or devoted skeptics. This “he said, but she said” approach to journalism often presents media consumers with a false sense that the science isn’t settled and that there is room for honest disagreement.

And so, while about 97 percent of climate experts agree that climate change is happening and humans are causing it a scientific consensus that has steadily increased over the last decade a 2005 study found that a majority (52.7 percent) “of prestige-press articles featured balanced accounts that gave ‘roughly equal attention’ to the views that humans were contributing to global warming and that exclusively natural fluctuations could explain the earth’s temperature increase.”

Other studies have found similar biases and flaws in mainstream reporting on climate change as well as an overall collective disinterest in the climate issue among mainstream journalists which is evident in the sharp 42 percent decline in mainstream media coverage of global warming since a peak in 2009 following the so-called “Climategate” email hacking scandal (which later investigations concluded raised no serious issues about the consensus scientific view on global warming).

And none of this even accounts for the right-wing echo chamber of denial, which is well-funded and well-organized in its constant barrage of repeatedly debunked myths, including:

–The planet has natural variations in climate and whatever warming that is happening now is just part of those natural cycles.

–Scientists in the 1970s thought the planet was cooling. Now everyone thinks the planet is warming.

–Scientists are merely saying what big-government liberals want them to say in order to justify government grants.

–This is all just a scam promoted by Al Gore and other big investors who will make lots of money off of clean energy investments.

–There was a warming trend in Medieval times that is much greater than what we are seeing today.

I could go on, of course, but you get the point. These are all myths with very specific rebuttals that have been offered repeatedly by climate scientists. Yet, the denial-o-sphere does not care. They’re not here to engage in open and honest debate. They are here to manufacture doubt, delay action, and attack real climate scientists.

Typical of the denial-o-sphere tactics is the latest coal-industry sponsored effort to intimidate and harass Penn State climate scientist Michael Mann. This astroturf advocacy campaign is targeting the Penn State Speakers Forum for allowing Mann to speak about the climate change challenge.

Yet, in spite of the media’s penchant of looking at the climate crisis through the prism of human interest stories, this attack on Mann has been mostly ignored by the mainstream media. A Google News search returned only one article in the U.S. on the New York Times’ Dot Earth blog run by science journalist Andrew Revkin.

With the American media seemingly ignorant, lazy and disinterested in what will be the biggest crisis facing humanity in the 21st Century, it is perhaps not surprising that political leaders, like the House Republicans in The Hill story, feel no pressure to take the climate crisis seriously.

Unfortunately for all of us, when it comes to the climate crisis, denial isn’t a strategy that will have any influence on the unyielding laws of climate physics.