A half millennium ago this Feb. 2, the Spaniards felt they had put an end to the first major resistance to the European/Christian conquest of the Americas by executing Hatuey, an Indigenous freedom fighter who fought them on Hispaniola and Cuba. But Hatuey’s spirit of independence survived, as William Loren Katz notes.

Little is known about Hatuey, a Taino Cacique [leader], not his date of birth, nor exactly when he first led his forces into battle. But key elements of his story have come down to us from Bishop Las Casas, the Dominican priest who became Spain’s “Defender of the Indians.” On Feb. 2, 1512, Las Casas was in Cuba when Hatuey died at the hands of the European invaders.

Hatuey’s armed resistance had begun on the island of Hispaniola [today’s Haiti and the Dominican Republic] during the age of Columbus and probably increased after 1502 when a fleet of 30 Spanish ships brought over the new Governor Nicolas de Ovando along with hundreds of Spanish settlers and a number of enslaved Africans to pursue Spain’s search for gold. 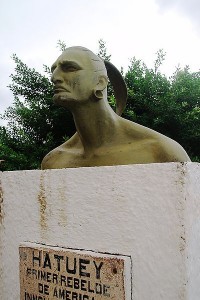 Monument to Hatuey in Cuba

But oppression rarely goes as planned. Before the year was over Governor Ovando complained to King Ferdinand that the enslaved Africans “fled among the Indians, taught them bad customs, and could not be captured.”

The last four words reveal more than his problem with disobedient servants or his difficulty of retrieving runaways in a rainforest. Ovando is probably describing the formation of the first American rainbow coalition: Hatuey and his followers are greeting and embracing the runaway Africans as allies.

In 1511, after about a decade of armed resistance in Hispaniola, Hatuey and 400 of his followers climbed into canoes and headed to Cuba. His plan was not escape but to mobilize fellow Caribbean islanders against the bearded intruders, their lust for gold, and the slavery, misery and death their invasion brought.

In Cuba, Hatuey’s clear message was recorded by Las Casas: the intruders “worship gold,” “fight and kill,”  “usurp our land and make us slaves” For gold, slaves and land, “they fight and kill; for these they persecute us and that is why we have to throw them into the sea.”

Hatuey’s forces had no sooner begun to mobilize Cubans when well-armed Spaniards under Diego Velázquez landed in Cuba. (One was Hernán Cortés who would conquer Mexico.) Hatuey’s strategy to attack in guerrilla fashion and then retreat to the hills and regroup for the next attack kept the Spaniards pinned down at their fort at Baracoa for at least three months.

But finally a Spanish offensive overwhelmed Hatuey and his troops. On Feb. 2, 1512, Hatuey was led out for a public execution. Las Casas described the scene:

“When tied to the stake, the cacique Hatuey was told by a Franciscan friar who was present something about the God of the Christians and of the articles of Faith. And he was told what he could do in the brief time that remained to him, in order to be saved and go to heaven.

“The Cacique had never heard any of this before and was told he would go to Inferno where, if he did not adopt the Christian faith, he would suffer eternal torment. [He] asked the Franciscan friar if Christians all went to Heaven. When told that they did, he said he would prefer to go to Hell.”

Hatuey was then burned alive.

As the first freedom fighter of the Americas, Hatuey not only united Africans and Indigenous people against the invaders, but in bringing his fighters from Hispaniola to Cuba, he initiated the first pan-American struggle for independence from colonialism.

Today a statue in Cuba celebrates Hatuey as a national hero, its first great liberator. He was more than that. He was the first of the heroic American freedom fighters whose contributions led to 1776, to the revolution in Haiti, and to Simon Bolivar who also sought to liberate all of the Americas from Spain.

One could argue that Hatuey was the first to have ignited a spirit of liberty and independence that would circle the globe for the next 500 years.

William Loren Katz adapted this essay from his just published and updated edition of Black Indians: A Hidden Heritage. His website is: williamlkatz.com

← Murdoch’s WSJ Misleads on Climate
Divining the Truth about Iran →