Exclusive: Despite a broad consensus among scientists that global warming is real and dangerous, Rupert Murdoch’s Wall Street Journal and other right-wing media have made climate-denial a central tenet of U.S. conservatism, requiring endless distortions, as Sam Parry observes. 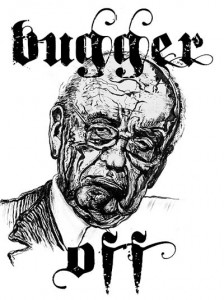 Rupert Murdoch and his phrase, “Bugger Off,” by Robbie Conal (robbieconal.com)

The recent op-ed in Rupert Murdoch’s Wall Street Journal signed by 16 scientists, “No Need to Panic About Global Warming,” is less surprising in its denunciation of global warming science the Journal’s editorial page seems incapable of dealing in reality-based climate journalism than it is in its bush-league analysis.

Memo to op-ed writers: When you resort to using Russian gulags to describe how modern scientific debate in the U.S. is conducted, you may want to adjust your hyperbole filters.

The only direct scientific claim made in the entire op-ed is the assertion that the planet hasn’t warmed in the last ten years. How could climate change be happening if the planet isn’t warming?

But anyone who has spent even a day researching climate change on the Internet will discover two points about this claim:

On the first point, just look at the average global temperatures since 1880 and you tell me if the planet is warming (http://data.giss.nasa.gov/gistemp/graphs_v3/):

The claim that the planet hasn’t warmed over the last 10 years bizarrely ignores the fact that the last ten years have all been well above normal. We’ve reached a new plateau in global temperatures that is significantly hotter than historical averages.

It also ignores the fact that global temperatures don’t go straight up every single year. No one has ever claimed that to be the case. Indeed, climate scientists have bent over backwards to explain how we should focus on longer term trends and the big picture rather than looking at one specific year or a single weather event.

Global warming is like putting the climate on steroids. It doesn’t by itself determine the weather in any given year. But the more we juice the atmosphere with heat-trapping gases, the longer warming term trends become painfully obvious.

Greenhouse gases in the Earth’s atmosphere are but one of many factors affecting the planet’s climate. In any given year, events like the El Nino and La Nina Southern Oscillation cycle (ENSO) can have a much more immediate impact on average global temperatures.

So this no-warming-in-the-last-decade claim is spurious. But, even if for the sake of argument you were to accept the point, it would still be completely irrelevant.

There is no denying that the accumulation of carbon dioxide in the Earth’s atmosphere has increased about 40 percent since the beginning of the Industrial Revolution. We are now at 392 parts per million (ppm) CO2 concentration compared with about 280 ppm pre-industrial levels.

This is a higher concentration of CO2 in the Earth’s atmosphere than anytime in at least hundreds of thousands perhaps millions of years. In fact, CO2 concentrations have not exceeded 300 ppm at any time in at least the last 650,000 years. Considering that human civilization began roughly 15,000 years ago, we are already in uncharted territory.

But, this is just the prologue to what’s in store. The current atmospheric concentrations of CO2 are expected to explode in the coming decades. Even the most aggressive climate pollution reduction policies proposed and debated both in the U.S. and globally have been designed to limit CO2 concentrations to 450 ppm.

Given the power of the denial-o-sphere in American media like the Wall Street Journal and the political gridlock in Washington, America is still probably years from taking the serious national steps to even hit the 450 ppm goal.

But these natural processes have limits. It’s hard for the world’s forests to act as carbon sinks, for instance, when humans are simultaneously deforesting the planet. While it’s true that some of these forests are regenerating and growing forests absorb more carbon than mature forests, the current balance of deforestation rates make the world’s forests a major source of carbon emissions, rather than a net sequestration resource.

Even the planet’s vast oceans have their limits. Right now, oceans absorb up to a quarter of all anthropomorphic sources of CO2 emissions. But, recent research suggests that oceans are becoming less efficient at absorbing CO2 as the concentrations of ocean CO2 levels increase.

The results are all too obvious. The concentration of CO2 in the Earth’s atmosphere is growing at roughly 2-3 ppm per year and increasing. This rate of growth is overwhelming the planet’s ability to absorb CO2. And, according to some experts, we are currently on pace to hit an unheard-of 1000 ppm by the end of the century.

The last time the Earth saw CO2 levels at 1000 ppm was 35 million years ago when the planet was about 30Ëš F warmer than today, there was little or no ice on the planet, and the seas were 250 feet higher than today.

This is roughly what the U.S. would look like with seas 250 feet higher: 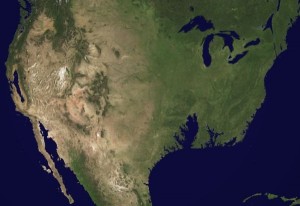 Granted, this level of sea level rise is not going to happen in our lifetimes even under the direst climate models. Even if we hit 1000 ppm by the end of the century, it will take a long time to melt all the ice on the planet.

That said, scientists are very concerned that once we exceed 450 ppm, we could lose the ability to control future warming and that we will set the planet on a kind of runaway train course that will make this level of future warming inevitable.

The larger point is that we are not talking about trivial, manageable events. Global warming is a massive global experiment with obviously catastrophic implications beyond our ability to control.

Those who seek to deny the science and delay action really don’t have a response to this bigger picture argument. What do they think the world looks like at 500 ppm? Or 1000 ppm?

Yes, they can play statistical games to claim that the Earth hasn’t warmed in the last 10 years. But their protestations sound a lot more like children grabbing at excuses not to take a bath or brush their teeth. We certainly shouldn’t make governing decisions based on this puerile nonsense.