Exclusive: An unprecedented protest is sweeping the Internet against proposed U.S. legislation that critics contend goes too far in punishing Web sites where copyrighted content might get posted. Wikipedia and other major Internet sites have blacked out pages as a warning of what the laws might cause, Lisa Pease reports.

I watched in awe Tuesday night as the Web started to go dark. Sites around the Internet suddenly sported black backgrounds or big black redactions to protest SOPA, the Stop Online Piracy Act, and PIPA, the Protect IP Act. Both acts are designed to prevent online theft of intellectual property (from written works to software, music, video and types of content).

Wikipedia, perhaps the most visited site on the Internet, has blacked out the pages of most search results to display a message asking us to “Imagine a World Without Free Knowledge.” Dozens of other sites, like DailyKos, MichaelMoore.com and others are sporting black pages or blotches and links to online petitions to tell Congress not to pass SOPA and PIPA. Even the non-American-based Reporters sans Frontiereshas blacked out the English version of its site, Reporters without Borders, in protest. 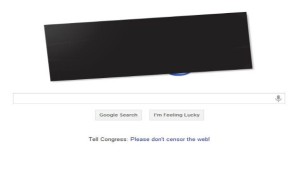 Google’s logo, blacked out in protest of congressional bills on intellectual property rights.

The most surprising protester of all is Google. While other sites are largely funded by individuals on a donation basis, Google is a publicly held corporation. To see the single most used search engine in the world take up this cause is impressive. And while some are heartened by this, others, such as Creative America, think this is a bad sign. (Creative America is a front group for the major entertainment corporations seeking to protect their companies from the damage of piracy.)

As a content producer myself, I am fully in support of anti-piracy legislation that makes sense. But the large-scale protests are a clear sign that the legislation has gone too far. SOPA and PIPA do not target the content pirates. They target instead the sites where piracy has the ability to take place.

It would turn Web site developers into content police, and should they miss a step, it gives the U.S. government the power to shut down the site, force advertisers off the site, intercept payments to the site, and more.

What makes this kind of legislation such a bad idea is that anyone can then force a site they don’t like off the Internet simply by posting stolen content there and pointing it out to the authorities. Suddenly, hidden hands could take down some of the most popular and useful sites by deliberately planting illicit material.

If you think that sounds paranoid, review the history of the FBI’s COINTELPRO operations in the 1960s, where the FBI infiltrated and sabotaged peace groups (which J. Edgar Hoover thought were Communist efforts) and MHCHAOS, the CIA’s own program to disrupt leftists and peace activists during the 1960s and 1970s.

Via YouTube today, you can watch some amazing documentaries that tell the truth about parts of history that we have not been accurately informed about via the mainstream media. For example, you can view a documentary in which British and Israeli leaders discuss how during the 1956 Suez Canal crisis, a three-state pact between Britain, France and Israel caused Israel to attack Nasser’s Egypt to give Britain and France the excuse to seize control of the canal to “protect” the Egyptians from the Israelis.

If someone didn’t want you to see this history, anyone could post illegal content, bring it to the attention of authorities, and essentially bring down the entire YouTube site via this legislation. All advertising revenue would be cut off. Internet providers in the U.S. would block the site. And the millions who make money from their little YouTube videos would suddenly be out of their own income streams.

A way to protect intellectual property needs to exist. But SOPA and PIPA are not that way. They go too far and don’t offer appropriate steps for remediation. If someone has posted pirated content, that individual, not the site itself, should be held responsible.

I’m always shocked when people think nothing of copying an album for a friend, copying a DVD of a film and distributing it to others, and even giving out homemade copies of software that is not specifically designated as freeware. This is theft, and I call others on it. They say oh, my little copy is not hurting anyone’s business. But when five million people are saying and doing the same thing, yes, they most definitely are.

I wish there was a way to stop that kind of piracy, because it really does cut into the ability of content producers to make a decent living at something people clearly find enjoyable or useful enough to steal. But this legislation isn’t it.

If you have a site and want to join the protest today, see http://sopastrike.com/ for more information. And if you haven’t signed a petition yet, why not?

← Will Obama Resist Push for Iran War?
How Not to Celebrate Liberty →