Mitt Romney and other Republican presidential hopefuls (with the exception of Ron Paul) are touting tough-guy global strategies that sound like George W. Bush, circa 2002. But recent public opinion polls suggest that Americans are leery of new neocon adventures, Lawrence S. Wittner reports.

Are American politicians out of sync with the public when it comes to foreign policy? There is considerable reason to believe so.

Throughout the scramble for the Republican presidential nomination, the major candidates have certainly been rabidly nationalistic. In a major foreign policy address on Oct. 7, 2011, Mitt Romney proclaimed that “the twenty-first century can and must be an American Century.” 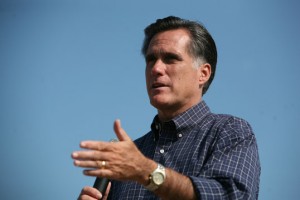 Championing a vast military buildup, he argued that, to secure this “American Century,” the United States should have “the strongest military in the world.” By contrast, he assailed the “shameful” role of the United Nations and other international institutions and declared that he did not see any reason to obey them, or the international law they represented, when it did not suit the U.S. government.

Romney’s newly-anointed top competitor, Rick Santorum, says nothing about the United Nations, international cooperation or international law in the “10 Steps to Promote Our Interests Around the World” posted on his campaign website. Instead, he argues that the United States is “intrinsically better prepared to lead than any other nation.”

The former Pennsylvania senator adds: “I truly do believe that we are ‘the last best hope of earth,’” but, alas, under President Barack Obama, “we have been weak where we should have been strong and we have been appeasing of evil.” Naturally, then in Santorum’s view, Americans should be “increasing our military preparedness.”

By contrast, polls show that most Americans favor a more cooperative world order based on international law, a stronger United Nations, and a less dominant role for the United States in world affairs.

In a World Public Opinion poll of 16 nations in 2009, 69 percent of Americans supported the view that nations are obliged to abide by international law even when doing so is at odds with their national interest.

Overall, as public opinion studies show, Americans want a smaller, rather than a larger, global footprint for their nation. According to a 2010 poll by the Chicago Council on Global Affairs, only 8 percent favored the United States playing the role of the preeminent world leader, while 71 percent favored a cooperative approach.

Much of this opposition to U.S. dominance in the world is undoubtedly based on distaste for the overseas U.S. military intervention of the past decade. In recent years, polls have found substantial public opposition to the U.S. wars in Iraq and Afghanistan. In 2010, a poll by the Chicago Council on Global Affairs found that 79 percent of Americans agreed with the statement that “the U.S. is playing the role of world policeman more than it should.”

Of course, during the frenzy of an election campaign, it is tempting to whip up nationalist sentiment through high-flying rhetoric about an “American Century” and America’s allegedly unique virtue. How many times have we heard, in these circumstances, that America is the greatest nation in the history of the world?

But, in the end, Americans might prove more committed to an internationalist policy than this year’s flag-waving politicians think.

Lawrence S. Wittner is Emeritus Professor of History at the State University of New York/Albany. His latest book is Confronting the Bomb: A Short History of the World Nuclear Disarmament Movement (Stanford University Press).

10 comments for “Americans Fed Up with Neocon Wars?”