President Obama postponed a military exercise with Israel out of concern that Prime Minister Benjamin Netanyahu was drawing the U.S. into war with Iran, Gareth Porter and Jim Lobe reported. Obama took the step despite pressure from Republicans and Congress to line up behind Israel’s desires.

By Gareth Porter and Jim Lobe

The postponement of a massive joint U.S.-Israeli military exercise appears to be the culmination of a series of events that has impelled President Barack Obama’s administration to put more distance between the United States and aggressive Israeli policies toward Iran.

The exercise, called “Austere Challenge ’12” and originally scheduled for April, was to have been a simulation of a joint U.S.-Israeli effort to identify, track and intercept incoming missiles by integrating sophisticated U.S. radar systems with the Israeli Arrow, Patriot and Iron Dome anti-missile defense systems. 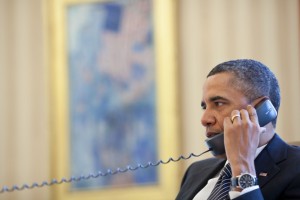 U.S. participation in such an exercise, obviously geared to a scenario involving an Iranian retaliation against an Israeli attack on its nuclear facilities, would have made the United States out to be a partner of Israel in any war that would follow an Israeli attack on Iran.

Obama and U.S. military leaders apparently decided that the United States could not participate in such an exercise so long as Israeli Prime Minister Benjamin Netanyahu refused to give the administration any assurance that he will not attack Iran without prior approval from Washington.

The official explanation from both Israeli and U.S. officials about the delay was that both sides agreed on it. Both Israeli Foreign Minister Avigdor Lieberman and Mark Regev, spokesman for Netanyahu, suggested that it was delayed to avoid further exacerbation of tensions in the Gulf.

The spokesman for the U.S. European Command, Capt. John Ross, and Pentagon spokesman John Kirby told Laura Rozen of Yahoo News on Sunday that the two sides had decided on the postponement to the second half of 2012 without offering any specific reason for it.

However, Rozen reported Monday that “several current and former American officials” had told her that the delay had been requested last month by Israeli Defense Minister Ehud Barak. One official suggested privately that there is concern that the alleged Barak request could be aimed at keeping Israel’s options open for a strike on Iran’s nuclear facilities in the spring.

But it would make little sense for Netanyahu and Barak to commit Israel to war with Iran before the shape of the U.S. presidential election campaign had become clear. And Barak would want to have knowledge gained from the joint exercise in tracking and intercepting Iranian missiles with the U.S. military before planning such a strike.

Moreover, the Israeli Air Force was still touting the planned maneuvers as recently as Thursday and, according to Israeli media, was taken by surprise by Sunday’s announcement.

The idea that the Israelis wanted the postponement appears to be a cover story to mask the political blow it represents to the Netanyahu government and to shield Obama from Republican charges that he is not sufficiently supportive of Israel. Nevertheless, the signal sent by the delay to Netanyahu and Barak, reportedly the most aggressive advocates of a strike against Iran in Israel’s right-wing government, could hardly be lost on the two leaders.

Obama may have conveyed the decision to Netanyahu during what is said to have been a lengthy telephone discussion between the two leaders Thursday night. Iran policy was one of the subjects Obama discussed with him, according to the White House press release on the conversation.

The decision to postpone the exercise may have been timed to provide a strong signal to Netanyahu in advance of this week’s visit to Israel by Chairman of the Joint Chiefs of Staff Gen. Martin Dempsey, who reportedly expressed grave concern at a meeting with Obama last fall about the possibility that Israel intended to carry out a unilateral Israeli attack on Iran’s nuclear facilities without consulting with Washington in advance.

Obama has been quoted as responding that he had “no say” in Israel’s policy, much to Dempsey’s dismay.

The coincidence of the announced delay with Dempsey’s mission thus suggests that the new military chief may inform his Israeli counterpart that any U.S. participation in a joint exercise like “Austere Challenge ’12” is contingent on Israel ending its implicit threat to launch an attack on Iran at a time of its own choosing.

This apparent rift between the two countries comes in the wake of a series of moves by Israel and its supporters here that appeared aimed at ratcheting up tensions between the U.S. and Iran.

In November and December, U.S. neoconservatives aligned with Netanyahu’s Likud Party and what is sometimes called the Israel lobby engineered legislation that forced on the Obama administration a unilateral sanctions law aimed at dramatically reducing Iranian crude oil exports and “collapsing” its economy.

The administration’s reluctant embrace of sanctions against the oil sector and the Iran’s Central Bank led in turn to an Iranian threat to retaliate by closing off the Strait of Hormuz. The risk of a naval incident suddenly exploding into actual military conflict suddenly loomed large.

Netanyahu and Barak are widely believed to have hoped to provoke such conflict with a combination of more aggressive sanctions, sabotaging Iranian missile and nuclear facilities, and assassinations against
individual scientists associated with the nuclear program.

Amid tensions already reaching dangerous heights, Iranian nuclear scientist Mostafa Ahmadi Roshan was assassinated in Tehran in a bombing on Jan. 11. Both Secretary of State Hillary Clinton and National Security Council spokesman Tommy Vietor immediately condemned the assassination and vehemently denied any U.S. involvement in that or any other violence inside Iran.

It was the first time the U.S. government had chosen to distance itself so dramatically from actions that mainstream media has generally treated as part of a joint U.S.-Israeli policy. U.S. officials told the Associated Press on Saturday that Israel was considered responsible for the killing, and the London Times published a detailed account of what it said was an Israeli Mossad operation.

The killing of the nuclear scientist also came in the context of what appears to be an intensification of diplomatic activity that most observers believe is designed to lay the groundwork for another P5+1
meeting (the permanent members of the U.N. Security Council and Germany). It has been widely assumed for the past week or so that here another P5+1 meeting will be held with Iran by the end of this month or early next.

While recent published stories about Washington’s communicating with Tehran through intermediaries stressed U.S. warnings about its “red lines” in responding to any Iranian move to close the Strait of Hormuz, those same communications may also have conveyed greater diplomatic flexibility on the nuclear issue in the hope of achieving some progress toward an agreement.

Mossad is believed to have assassinated at most several Iranian nuclear scientists not enough to slow down the Iranian program. And the timing of those operations has strongly suggested that the main aim has been to increase tensions with the United States and sabotage any possibility for agreement between Iran and the West on Iran’s nuclear program, if not actually provoke retaliation by Iran that could spark a wider conflict.

The assassination of nuclear scientist Majid Shariari and attempted assassination of his colleague, Fereydoon Abbasi on Nov. 29, 2010, for example, came just a few days after Tehran had reportedly agreed to hold a second meeting with the P5+1 in Geneva on Dec. 6 and 7.

A major investigative story by Mark Perry, published Friday on the website foreignpolicy.com, quoted former CIA officials as saying that Mossad operatives had been impersonating CIA personnel for several years in recruiting for and providing support to the Sunni terrorist organization Jundallah, which operated inside Iran. That Israeli policy also suggested a desire to provoke Iranian retaliation against the United States.

Gareth Porter is an investigative historian and journalist specializing in U.S. national security policy. The paperback edition of his latest book, Perils of Dominance: Imbalance of Power and the Road to War in Vietnam, was published in 2006. Jim Lobe’s blog on U.S. foreign policy can be read at http://www.lobelog.com. [This story was published by Inter Press Service.]

← Americans Fed Up with Neocon Wars?
In Case You Missed… →