U.S. political journalists love to cover the horse race of presidential politics focused on polls and gaffes while usually obscuring the nation’s actual problems and how the candidates and their proposals relate to this real world, as Danny Schechter notes.

“Game On” was Rick Santorum’s first comment after his “surge” was considered successful with a mere 30,000 votes in Ioway. He inadvertently gave the game away by calling it a game, which is what it is.

Only this game is not just about politics but about the media. Pseudo-events like this are what the media lives for: it provides something for them to do, and to feel important while doing it. It creates airtime for endless punditry, and a spectacle to liven up a dull Iowa winter. 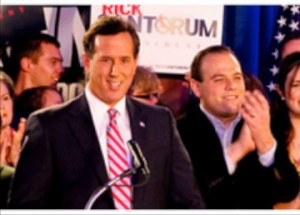 For Iowans, it’s a chance to “participate” in something that sounds important; for media heads, it’s a routine of the news, a ritual. The media, in effect, provides an infomercial posing as real news.

Yet throughout the weeks of endless around the clock “coverage,” including polling and analyzing TV ads, there’s barely a mention about how the media benefits by creating a phony sense of excitement while generating revenues from the money spent on the endless ads, like the $17 million Texas Gov. Rick Perry invested in his run to nowhere. (How much do you think each vote cost.)

Chris Crawford makes some points picked up on Undernews that were buried, if reported at all.

1. Caucuses don’t even pick binding convention delegates.
2. The winner’s raw vote total would fill one-fourth of an NFL stadium.
3. Only 100,000 of the state’s 3 million residents participate.
4. Presidents Gephardt, Huckabee, Harkin, Robertson.
5. Saying it’s worth is “winnowing” the field is like the family dog eating table scraps.
6. The winner gets maybe six unbound delegates out of more than 1,100 needed for the nomination.
7. Iowa has five times more hogs than people.

The Project on Excellence in Politics reported, “the news media were most focused on the shifting horse race that foreshadowed Rick Santorum’s strong late showing, according to a PEJ analysis of the leading themes in the Iowa press narrative.

“This report, which is based on a sample of more than 11,500 news web sites, found that the horse race elements, such as strategy, momentum and polls, represented the leading theme (27%) in the coverage of the volatile Iowa contest. That was followed by coverage of the candidate’s records and issue positions (19%) and then by attention to the Iowa caucus system itself (16%). Coverage of the concerns and activities of the Iowa voters trailed well behind, at 6%.”

Many media outlets pointed out the irrelevance of the Iowa circus but they covered it anyway as if it mattered, thus giving it an importance by its visibility that many of its gutless analysts acknowledged was a farce, while calling themselves journalists and hyping it anyway.

Writes media critics Marvin Kitman, “Basically, the format of the event, which is not even a primary, is comparable to the number of people who showed up at a Politburo meeting in the old days of limited democracy in the USSR.

“Like Leninist democracy, the Iowa Caucus is based on the principle of democratic centralism, in which smaller groups get together to elect bigger groups. It’s a cross between voting in an actual primary and the great American tradition of selecting candidates in smoke-filled rooms before a convention.

“Actually, the Iowa Caucus is less democratic than the Politburo election since it disenfranchises so many eligible voters: people who work on Tuesday nights; folks who can’t afford a baby sitter; those away fighting our country’s battles on foreign shores; people out of town on business, or afraid of the dark. Whatever reason, only 80,000 or so people will bother to register their choice.”

Now, it’s on to New Hampshire for more of the same with a smaller crew of gamers still standing. Bachman is gone, and Perry is posturing about a campaign reassessment, and Gingrich has been “newted” by voter disgust. Huntsman still has some of his daddy’s money to spread around.

“As coverage of the economy improves, President Obama will be viewed more favorably, meaning that Republican candidates may have to focus on different issues to appeal to their base, as well as to undecided voters,” according to Racheline Maltese, a Media Tenor researcher.

“Iowa is often about social issues because of the limited number of participants in the caucuses. It’s an important time to see what messages candidates are providing to their supporters, but it is not always reflective of the wider tone of the election,” she notes.

“Not always reflective” — how’s that for an understatement? The real winner so far is, ironically, Barack Obama, just by doing nothing but looking presidential when he’s not playing golf or issuing New Year’s Eve “signing statements” to express “reservations” about unconstitutional provisions in the National Defense Authorization Act of 2012.

Meanwhile, our fearless media continues to under-cover the financial crisis, the desperation of the poor and economic pressure on most American families. That failure is compounded by an unwillingness of media mavens to admit that their own practices contribute to a crisis that is fast becoming a collapse.

The New York Times turned itself into an even more of a newspaper for the 1 percent by raising its newsstand price to $2.50. You have to pay more to read more about the growing inflation.

Meanwhile, TV “news” programs are increasingly losing what was left of their news, as the Washington Post reports:

“TV newscasts are increasingly seeded with corporate advertising masquerading as news, and the federal government wants to do something about it.  Concerned that subtle ‘pay-for-play’ marketing ploys are seeping into the news, the Federal Communications Commission has proposed a regulation that would require the nation’s 1,500 commercial TV stations to disclose online the corporate interests behind the news.

“The proposal, which could take months to be enacted, has drawn praise from media watchdogs and consumer groups that have criticized the current system, which requires broadcasters to disclose that an advertiser paid for a mention on the news only in the closing credits of a broadcast.

“‘Unless you stick around for the end credits, you’re unlikely to know it’s payola,’ said Corie Wright, senior policy counsel for Free Press, a media watchdog group backing the FCC proposal. ‘If broadcasters were required to put it online, you could check to see if it was actually sponsored or not.’

“The proposed regulation is aimed at news programs that appear to viewers to be the work of independent journalists, but in fact sponsors have shaped or even dictated the coverage.”

The problem is that even much of the non-fudged news is itself a context-free concoction with little perspective or challenge to an increasingly corrupt status quo.

This is a game of fools played by fools so the rest of us stay fooled.

4 comments for “US Political News Is a Fool’s Game”