In an election year, as many U.S. politicians compete to out-macho one another over fighting a new war with Iran, there is little self-reflection on whether the American side bears its own share of guilt in this troubled bilateral relationship, as Winslow Myers observes.

U.S. behavior long ago provided one causal context for our unease about the presumed nuclear aspirations of the Islamic Republic of Iran: the U.S. and Britain messed with Iran’s last authentically democratic election in 1953, out of fear of communist influence and the nationalization of oil.

U.S. oil corporations, a minor partner before the CIA overthrew elected Mohammad Mossadegh and installed the dictatorial Shah, then became the largest profiting entity, even more than the country from which the oil came. 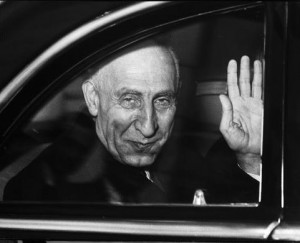 Fast forward past the hostage crisis of 1979-81 to the present. The dynamic remains pretty much as it was 60 years ago: strategic jockeying for oil and natural gas, raw exercise of military competitiveness, and now the understandable impulse to acquire nuclear weapons on the part of nations fearing superpower dominance.

Iranian leaders were quick to note that Saddam Hussein and Muammar Gaddafi were vulnerable because the U.S. and friends didn’t have to be concerned about nuclear retaliation (though U.S. President George W. Bush and British Prime Minister Tony Blair were all too happy to use Saddam’s presumed nukes as a convenient casus belli).

This is the prevailing paradigm in the world, and those in favor of alternatives are forced to accommodate. Thousands of organizations may have put in millions of hours of peace activism, but we also continue to pay the taxes that fund futile wars in Vietnam or Iraq or Afghanistan,and now possibly with Iran.

This paradoxical paradigm, like it or not, also defines our personal context. Humans are born, grow to adulthood, work or perhaps have a family, grub for money or prestige, exercise power over others or have it exercised upon us, and die, dog-eat-dog most of the way.

Spiritual leaders past and present call us toward a different story, another set of values, where we are meant to mature into a compassionate identification with the whole earth and all people, a world that works for everyone, and feeds all children.

Too many of us still refuse to see the practical relevance of such values either to international or personal politics. We call them naive, rationalizing our casual saber-rattling. We assume thousands of nuclear warheads in the control of a democratically elected leader are qualitatively different from the same weapons in the hands of a dictator, denying the reality that fallout from such weapons, no matter whose, would pollute the rain that falls on the just and unjust, the warriors and the babies, alike.

“Our” nuclear weapons are justified by our need for security, while “theirs” indicate an unacceptable aggressiveness. Even within the existing paradigm of national rivalry they are strategically obsolete, as former high officials like Henry Kissinger, Sam Nunn, George Schultz and William Perry have eloquently demonstrated.

Nuclear weapons, potential or actual, become mightily convenient to the perpetuation of these circular adversarial systems, built upon fear, that prevent leaders from breaking beyond the status quo, a status quo that is not static. As more and more nations acquire these weapons, the possibility of error or deliberate misuse (as if there could be a “right use”) steadily increases.

The existing paradigm pits governments against each other under the misapprehension that nuclear weapons can produce clear winners and losers instead of universal catastrophe. The emergent paradigm pits thoughtful, active citizens in every nation against war itself, demonstrating personal and local models of how nations can resolve their inevitable conflicts without violence.

That is only the route to real security. Its source is the practical, beyond-politics Golden Rule, variants of which are found in every major religion, but also in the conclusions of ruthlessly realistic psychological insight.

Back in 1964, the Freudian analyst Erik Erikson, worried about nuclear weapons, called for application of the Golden Rule to the international scene: “Nations today are by definition units of different stages of political, technological and economic transformation.

“Insofar as a nation thinks of itself as a collective individual, then, it may well learn to visualize its task as that of maintaining mutuality in international relations. For the only alternative to armed competition seems to be the effort to activate in the historical partner what will strengthen him in his historical development even as it strengthens the actor in his own development, toward a common future identity.”

In an already dangerous world where nine countries of diverse political persuasion possess the bomb, it matters little whether a tenth does. What matters is that the people of the world occupy and reanimate with a spirit of good will the tired tropes of bellicosity, good will based on a common understanding of the evils of war, especially nuclear war.

The 80 million citizens of Iran long for the same prosperity and liberty that most Americans enjoy, and many of them risked life and limb to demonstrate their yearning. Superpower leadership on disarmament initiatives, along with more people-to-people exchanges, would consolidate Iran’s security and strengthen our own far more effectively than military threats.

Winslow Myers, the author of “Living Beyond War: A Citizen’s Guide,” serves on the Board of Beyond War (www.beyondwar.org), a non-profit educational foundation whose mission is to explore, model and promote the means for humanity to live without war.

3 comments for “Occupying Fears About Iran”