After years of American-led sanctions followed by a U.S. invasion and long occupation, Iraq is a shattered society with sectarian tensions again on the rise, but the Independent Institute’s Ivan Eland says the United States should resist the impulse to return militarily.

Although the increased sectarian violence in a post-U.S. Iraq has gotten most of the publicity from the international media, there are other telling signs that a bloody civil war there may be in the offing.

Much sentiment exists in Sunni majority areas, distrustful of the increasingly autocratic and uncompromising Shi’ite-run regime of Prime Minister Nouri al-Maliki, to form regional governments with more autonomy from the central government.

In fact, a majority of the provincial council of the Sunni-dominated Diyala province requested that the central government hold a referendum on whether the province should form a semi-autonomous region. 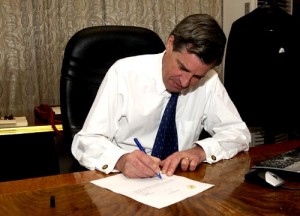 Iraq’s constitution allows provinces to create regional governments. The Kurds in northern Iraq have lived autonomously for decades, enjoying their own parliamentary democracy, prosperity, security, peace, and control over their own natural resources, including oil.

The Kurds don’t really want to be part of Iraq but have been kept in by autocratic Iraqi governments, the U.S. military occupation, and fears that Turkey would invade if they declared their independence (perhaps inspiring Kurds in southeastern Turkey to join them).

The inclination toward autonomy or separation in Iraq comes from having a government too centralized for a country fractured among Shi’ite, Sunni, and Kurdish ethno-sectarian groups and numerous tribes. Although the constitution allows decentralization through the creation of autonomous regional governments, the United States and now the Shi’ite-controlled central government have discouraged such devolution.

Despite Vice President Joseph Biden’s advocacy, when he was chairman of the Foreign Relations Committee of the U.S. Senate during the Iraqi civil war of 2006 and 2007, of splitting Iraq up into three federal states to quell violence, the U.S. governments of George W. Bush and Barack Obama have discouraged this idea.

The United States, as a status quo power, presumably believed, as did the British before them, that control of oil could be best achieved through dealing with a strong central government in Baghdad. Yet Kurdistan is already cutting oil deals with foreign companies without checking in with the Oil Ministry in Baghdad.

Given Iraq’s history of one group, usually the Sunnis, using a strong central government to oppress the other groups, continuation of any significant degree of authority in Baghdad will lead to conflict among the groups for dominance of that government.

The Shi’ites want to control the central government to prevent a return of traditional authoritarian Sunni domination. The Sunnis are scared that the Shi’ite-dominated Maliki government is going to repress them as payback for the era of Saddam Hussein, a good bet since Maliki has recently arrested or tried to arrest many Sunnis, including Iraq’s vice president, and purge others, including his deputy prime minister.

The Kurds, a traditionally oppressed people, fear repression from any government in Baghdad. Even some Shi’ites have advocated an autonomous region for themselves in southern Iraq. Devolving power in Iraq would reduce and probably eliminate sectarian violence, which is usually associated with nervousness about who controls the central government.

But if local governments were given control over their own security forces, judiciary, and finances, wouldn’t this provide a haven for al-Qaeda and other militant groups, as Maliki’s supporters argue? No, the violence in Iraq was attenuated after 2007 by a Sunni Awakening movement becoming fed up with the excessive violence of their fellow Sunnis in al-Qaeda and working against the group.

The local fighters of the Sunni Awakening had better intelligence on the group and how it could be decimated than the faraway Iraqi central government or U.S. forces.

But some argue that because the ethno-sectarian lines in Iraq are not always clear cut, devolving the country into a loose confederation of three autonomous regions could still leave subunits with a mixed population. For example, Diyala province is 60 percent Sunni, 20 percent Shi’ite, and 20 percent Kurdish.

Fair enough, but in my book Partitioning for Peace: An Exit Strategy for Iraq, I noted that the actual partitioning should be left up to Iraqis themselves and that many more regions than three could be created.

Academic research shows that the regional boundaries don’t need to perfectly divide ethno-sectarian groups (and those that did might run afoul of tribes that have more than one ethno-sectarian group in them), but they can’t leave a large minority inside a boundary line that will threaten the majority within. Only small minorities, say 10 percent or less, can be left “stranded” without inviting repression by the majority.

What about creating subunits too small to be economically viable? Academic research shows that this possibility is a myth. Besides, any confederation government in Baghdad could be in charge only of maintaining a free-trade area and perhaps a common currency.

After its forces have withdrawn, why should the United States be concerned with the devolution of power in Iraq? Because if power is not decentralized, Iraq is liable to degenerate into a civil war that will make the conflict in 2006 and 2007 look mild. Sectarian violence is already increasing.

And of course, the United States, which is responsible for the current mess, may be pressured by the Iraqi central government, other Iraqis, or the international community to return its forces to the internecine bloodletting to stanch the carnage. Although President Obama maintains that U.S. troops will not return to Iraq even if the civil war resumes, pledges of nonintervention have been later broken by previous presidents, especially after elections.

That doesn’t mean that the United States should tell the Iraqis how to organize themselves, but it could mediate any Iraqi-initiated peacefully negotiated devolution. Such mediation at least would be a constructive role for some of the 16,000 U.S. embassy personnel left in the country and might forestall future demands for a return of U.S. forces to Iraq under dire and dangerous circumstances.