At least since the oil shocks of the 1970s, it has been Official Washington’s dogma that the United States must stand ready to fight wars over access to Middle East oil, but the Independent Institute’s Ivan Eland questions that certainty in a new book, writes Carl Close. 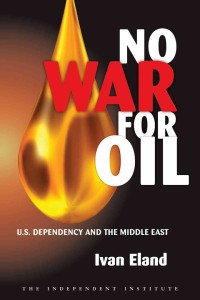 Ivan Eland’s book “No War for Oil: U.S. Dependency and the Middle East”

According to Eland, senior fellow at the Independent Institute and director of the Center on Peace & Liberty, the choice is not between preparing to fight wars for oil or risking the loss of energy resources that power the American economy, that’s a false alternative.

Rather, the choice is whether or not to continue to spend increasingly costly resources on military and diplomatic policies that are unnecessary and detrimental to the economic and political interests of the American people.

The issue is monumental and merits far greater public discussion and debate than it has received. It’s certainly more fundamental than many of the questions asked of the presidential hopefuls.

Here are highlights from the book summary:

–The United States devotes more resources to the defense of oil in the Persian Gulf than most people realize, a total of more than $334 billion per year (in 2009 dollars).

To ensure the free flow of oil from the Middle East, the United States maintains military facilities in Oman, Bahrain, Qatar, Kuwait, the United Arab Emirates, and Iraq, as well as in nearby Egypt, Djibouti, Turkey, Afghanistan, Pakistan, and Diego Garcia. Despite the large amount of U.S. expenditures to defend the Persian Gulf, the United States gets only about 18 percent of its imported oil from Saudi Arabia.

—“Cheap” foreign oil comes with huge hidden costs that American leaders and the public need to keep in mind when thinking about U.S. foreign policy.

According to one estimate, gasoline would cost U.S. consumers $5 more per gallon if federal spending for the defense of Persian Gulf oil were incorporated into gas prices. The U.S. military subsidy for oil means lower prices at the gas pump, but consumers ultimately pay a steep price for that fake discount (and more) in the form of higher taxes and inflationary deficit financing to help fund a large U.S. military presence abroad.

The king’s ransom that the United States spends to defend Persian Gulf oil is more than ten times the value of its annual imports from the Gulf.

–U.S. military protection of the Persian Gulf is unnecessary to ensure access to oil from that region.

Without Uncle Sam’s generous help, Persian Gulf oil producers, shippers and consumers (that latter residing mostly in Europe and East Asia) would have strong incentives to protect the free flow of oil. If the U.S. government eliminated its military subsidy for oil in the Persian Gulf, it could decommission approximately five army divisions, five active air wings of the Air Force, five Marine Expeditionary Brigades, and 144 ships, including six aircraft carriers, roughly half of the U.S. armed forces.

–Because only 10 percent of the oil consumed by the United States comes from the Persian Gulf, U.S. military protection of that region is even more irrational than Nineteenth Century European imperialism.

American taxpayers would enjoy significant savings if the United States were to rely exclusively on markets to obtain oil, just as Europeans became better off as their governments reduced their use of armed forces and protectionist trade policies and relied more on free markets to obtain goods from other countries. Unfortunately, the U.S. government has taken the opposite approach in recent years and has extended its security umbrella over oil-producing regions in West Africa, Latin America, the Caspian Sea region, and Central Asia.

One long-standing myth is that oil possesses “special” or “strategic” characteristics. Yet, there are many critical products that the market is allowed to supply in abundance at efficient prices, and oil should be no different. Furthermore, more than enough oil is produced in the United States to meet the needs of the U.S. military in time of war, and this supply can be augmented with oil purchased from Canada and Mexico. Thus, oil is not strategic.

–Becoming “energy independent”, a goal promoted by many Democratic and Republican politicians, is not in America’s best interest.

In reality, consumers are better off when they are free to buy goods from companies and regions that have a comparative advantage in the production of those goods. Energy independence would serve only special interests such as less-efficient domestic oil suppliers or alternative energy producers that can’t yet thrive without government subsidies or protection from foreign competition.