Despite a lack of policy prescriptions, Occupy Wall Street dramatized the crisis of income inequality in America. Now, Danny Schechter says the challenge for the movement is to expand on that message with outreach to the broader national population.

One of the oldest patterns of media coverage can be summed up this way: First, they ignore you. Then, they ridicule you. Then, they realize you are a story and fall in love. At that point, they build you up, but then — all at once — tear you down

You may not have changed, but they have, addicted as they are to keep coming up with shifting story lines, more to fight their own boredom and fear of tune-out from readers, listeners and viewers, than the validity or importance of the topic. 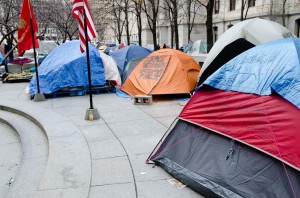 In the same way, that political sound bites went from nearly 30 seconds to five and that MTV-style editing invaded the newsrooms with quick cutting and razzle-dazzle effects, to “cover news” while making it difficult to concentrate on, much less comprehend the fast-paced presentation techniques. When asked by researchers, audiences could barely tell you what they had just seen, much less what it means.

We saw this in Iraq, when during the invasion, it was war all the time, literally around the clock but when you looked closely, it wasn’t really about Iraq or Iraqis; it was a narrative of the U.S. slaying the evil-doers, good guys versus bad guys. There was almost no other perspective. It was AAU, All About Us.

Now, with Occupy Wall Street, the pattern is similar. The underlying issues largely don’t exist, if they require explanation or analysis. Knowledge about Wall Street and the economy is assumed. It is conflict that drives the news.

There was little reporting on the occupation when it started. It was only after the cops began pepper-spraying protesters or after mass demonstrations that the media arrived en masse. Finally, they had adversaries, the cops and the protesters. That the media could understand.

Soon, reporters flocked to Zuccotti Park like blue birds. When one landed, they all landed. The TV trucks were everywhere especially at 6 and 11 p.m., so that local reporters could do silly live stand-ups and show off colorful characters to reinforce the narrative that the protesters were just having fun, with no serious ideas.

Many of these frontline reporters couldn’t tell you the difference between a derivative and a donut, but that didn’t matter because what does matter is face time, airtime, visibility.

First, the international press recognized that this movement was important. The media surrounding Zuccotti became a mini-United Nations with crews from BBC, Al Jazeera, Xinhua News Agency, Russia Today, Press TV, et.al. When they took it seriously, the American press began to do the same, and then network TV got into the act, once it became obvious that the protest was a national, even a global story.

Occupy Wall Street soon had a press desk trying to help reporters who often showed up with preconceived story lines demanded by their editors. Soon the stories about sex, drugs and drumming, no rock and roll yet, were everywhere as reporters turned over rocks and looked for the homeless and the harassers.

When one station framed the story as “the park is now a Wal-mart for rats,” City Hall saw an opening and harping on cleanliness (which has always been next to godliness in Manhattan) used hygiene as a pretext for shutting the Occupy Wall Street encampment  down.

Most activists were happy to be interviewed, but few ever watched how the stories were edited: what was covered and what was not. That’s also because many of the occupiers hate television and what it has become. They don’t read ponderous editorials or inflammatory headlines.

They do read and create social media, Twitter, Facebook, You-Tube, etc. The advantage is that they are then exposed to their truths and the news they believe they need to makes a difference. However, it’s news for the community, not the country!

The disadvantage is the protesters often aren’t reaching out to millions of Americans who won’t join the movement just because it’s cool. The 99 percent needs to be educated and inspired, but, alas, they rely on the tabloid newspapers and cable news, which are generally the least sympathetic to the movement.

You have to use media if you want to occupy the mainstream, and build a larger movement as opposed to being depicted as a tribal subculture of angry misfits. To avoid that, you need your own mainstream media campaign.

I would suspect that the Occupy Movement has not met with or tried to persuade editorial boards or newsroom execs. The protesters tend to react more to what they are saying than to act more proactively with their own media campaigns to shape a different message that gets disseminated widely.

As the movement moves on, messages have to change and target specific communities. This approach may be coming, but not quickly enough.

Already some big media outlets like The Washington Post, the paper still living off its Watergate reputation even as it finds few wars it won’t support, is saying Occupy Wall Street is “over.”

You can bet they want it to be over because their focus on politics starts with the top, the White House and specializes on inside-the-Beltway stories. For years, black people in Washington the majority have complained that they are largely ignored by their own hometown newspaper.

Washington Post editors are self-satisfied insiders, cloistered amid the 1 percenters who prefer to cover social movements of the past, not the present.

I once looked at how the Post covered the March on Washington back in l963. The story line was on how violence had been averted. Martin Luther King Jr.’s “I Have A Dream” speech was barely news. The march’s focus on the need for jobs was downplayed then just as Occupy Wall Street’s economic critique is downplayed today.

Today’s movement is being challenged by mayors, armed with the latest “non-lethal” toys, and coordinated by the Feds (a story few media outlets have investigated) who want to shut down the encampments.

Yes, it’s wrong and unconstitutional and unfair, but is this a battle they can win? Yes, many can go to jail but what message does that send? Occupy Wall Street is not about camping, it’s about crusading for justice.

Even Murdoch’s Wall Street Journal (Not the Occupied version) is praising the protests, declaring: “This Thanksgiving weekend, Wall Street should say a prayer of gratitude for Occupy Wall Street. While some bankers and brokers have sympathized with or supported this ragtag protest movement, others grouse that they are being demonized.

“But compared with financiers of the past, who faced nasty rhetoric, political hostility and physical danger, today’s bankers and brokers seem like a bunch of babies when they whine about being targeted by these dissidents. The ‘Occupy’ rhetoric might sound overheated, but it is golden praise alongside what bankers used to hear.”

Thus, at least some of the l percent are hearing the message, but, apparently, they don’t feel its strong enough.

It’s the 99 percent that the movement should aim at with actions and media that shows they are on the side of the vast majority. To do that, the protesters need more creative forms of mass outreach and organizing to remake a community of activists as a mass movement with demands that the people can resonate with and find ways of supporting.

What about political infomercials, TV spots and ads? Media hype for activism can help, but it’s no substitute for less glamorous organizing. In the end, that will be the test of whether the movement is “over” or goes over the top.

News Dissector Danny Schechter is covering Occupy Wall Street in his Newsdissector.com blog and will soon have a book out collecting his many reports since September. This was his TV report on Occupy Wall Street: http://tinyurl.com/6m53kf9 Comments to dissector@mediachannel.org  (This is the first in what we hope will be a series of Mediachannel1 reports exploring the media and the Occupy Movement.)