Patriotism was once famously called “the last refuge of a scoundrel,” but it’s also used to discredit citizens who dare question their own country’s wrongheaded policies, as is now the case for Israelis who advocate for a fair peace with the Palestinians, writes Ted Lieverman.

During the Vietnam War, many Americans held the notion that all antiwar activists were naive pacifists, draft-dodgers or ungrateful traitors. That was largely a myth that allowed members of the public to ignore the content of the activists’ messages about the war.

There may be a similarly mistaken notion about the peace movement in Israel, as the Israeli right-wing repeatedly castigates those who favor a two-state solution that would create a viable Palestine as an independent nation. In the last two months, criticism has moved to more dangerous attacks against Shalom Achshav (Peace Now), the oldest and most active peace organization in Israel. 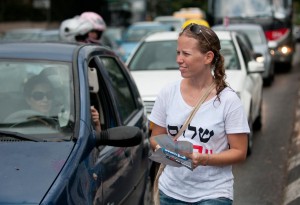 As reported in Haaretz, Israel’s main newspaper, on the night of Sept. 11, 2011, graffiti was spray-painted on the front door of the Jerusalem apartment of Hagit Ofran, the Settlement Watch Director of Peace Now. The slogans included “Peace Now, the End is Near.”

On Nov. 6, a bomb threat was announced over the building intercom where Peace Now’s Jerusalem office is located. On Nov. 7, Ofran’s home was again vandalized with swastikas painted on the outside, along with “Hagit Ofran, Rabin is waiting for you,” an apparent reference to Yitzhak Rabin, Israel’s pro-peace prime minister who was assassinated by a right-wing extremist on Nov. 4, 1995.

As the Settlement Watch Director, Ofran has been a prime target of threats and attacks by pro-settler groups. As part of her job, Ofran, who spent two years in Army intelligence, visits the settlements the “legal” (government approved) as well as the illegal to report on their growth, their activities, and their effects on the Palestinian villages and populace. Jerusalem police said they have arrested a suspect in the vandalizing incident at her home.

All of the threats referred to the “price tag,” the term used by the extreme right-wing of the settler movement to promise retaliation against those who seek to halt Jewish settlements in the West Bank. There have been similar attacks in the last few months on Israeli military outposts, as well as fire-bombings of property of Palestinians in Israel and the West Bank.

The cries of lack of patriotism against Peace Now are objectionable on several grounds, not least because virtually all officers and activists who run the organization are current or retired members of the military. Israel requires universal service, so all Israeli youth, liberal and conservative (except for the ultra-religious), spend two years in the Israeli Defense Forces.

Indeed, Peace Now began in 1978, when 348 soldiers and reserve officers signed an open letter to the prime minister supporting a peace agreement with Egypt. Among the current core of activists in Peace Now:

–Etai Mizrav, National Activities Coordinator of Peace Now, spent five years in the infantry and is now a major in the reserves. He saw action in Lebanon and Gaza and took part in the evacuation of Israeli settlers in Gaza.

–Yifat Gavishi was raised on a kibbutz in the Galilee near Lebanon and grew up with first-hand experience of Arab rocket and mortar attacks. Turning 18, she chose a combat unit and spent 2 ½ years in the border patrol. A second-degree black belt in karate, she taught hand-to-hand combat to border patrol soldiers. Yifat now works as a teacher in Tel Aviv, and volunteers her spare time to Peace Now.

–Tal Goldman volunteers with Peace Now, but his current employment is as a security guard. He was a tank driver and later a commander of a Merkava Mk 2 battle tank in the army; he still serves in the reserves.

–Yaniv Shacham is an independent film director who runs social media for Peace Now. Currently 37 and in the reserves, he served on active duty in the infantry in Lebanon and the West Bank.

–Danielle Blumenstyk works as Jerusalem Activities Coordinator for Peace Now.  A dual citizen of the U.S. and Israel, she served in an intelligence unit for two years, which included the 2006 war with Lebanon.

In interviews, the peace activists distinguished between their military duties and their political life. Mizrav is very clear: when you are on duty, you obey orders and engage your opponents, and your politics come later.

I had my own experience related to this. Interviewing Goldman, I described how I had photographed a West Bank demonstration near the village of Ni’lin in February of this year. The Israeli troops began lobbing tear gas grenades and then crossed the barrier to push back the demonstrators, forcing them (and me) to run away. Goldman nodded thoughtfully and said, “Yeah, I think that was me and my unit.”

In October, Peace Now received a commendation from Defense Minister Ehud Barack for its support of employees serving reserve duty. Accepting the award, General Director Yariv Oppenheimer issued a statement noting in part, “A loyal citizen is a person who is willing to fight for the state’s future and work towards changing reality. I am glad about receiving the certificate but as far as Peace Now is concerned reserve duty is obvious and not anything out of the ordinary.”

As of this writing, no Peace Now activist has been physically harmed in the recent threat campaign, but that may be cold comfort to the group. The use of violence against opponents of the settlers is on the rise, and Peace Now takes caution from the memory of Emil Grunzweig, an active member murdered by a grenade thrown into a peace rally in 1983.

Peace Now officers say that the threats and harassment will not deter them from criticizing what they see as a flawed government policy toward the Occupied Territories.

Ted Lieverman is a free-lance photographer based in Philadelphia.

← ‘Occupy’ Protests at a Crossroads
The Lost History of ‘J. Edgar’ →