Occupy Wall Street and related protests around the United States enjoyed surprising success in getting across a powerful message about economic inequality in America. But now the movement is at a crossroads both internally and externally, as Danny Schechter explains.

A week ago, I produced a TV documentary on inside the Occupy Wall Street encampment in New York. It was already somewhat obsolete by the time it aired.

The Park, once a buzzing center of debate and open-air meetings, has gone residential in the sense that virtually every square inch of what was a half-acre political terrarium is now dominated by tents, an effort to insure more protection from the elements and some better level of personal security. 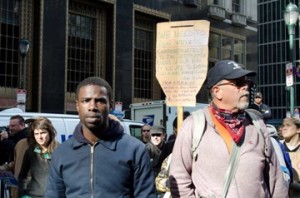 As private spaces proliferated, public space shrunk. Now, public health officials are raising the prospect of the spread of germs while violent incidents in other cities have police nationwide threatening to shut down the occupations in the name, of course, of preserving public safety.

The first such operation happened in Oakland, a town with a long history of police violence that was on display when cops overran the camp, seriously hurting an Iraq veteran, and triggering a call for a General Strike. Now the gendarmerie are hoping to shut it all down, citing three deaths in Occupy encampments around the country, including a shooting death on Thursday.

The Digital Journal reports: “Police warned that the camp was illegal and that protesters face arrest if they did not break up the camp. Police have lately been complaining about the presence of the camp, saying it was drawing needed personnel from policing crime in the city.

“An open letter the Oakland Police Officer’s Association issued after the shooting, said: ‘With last night’s homicide, in broad daylight, in the middle of rush hour, Frank Ogawa Plaza is no longer safe. … Please leave peacefully, with your heads held high, so we can get police officers back to work fighting crime in Oakland neighborhoods.’

There followed two more tragic events that Occupy organizers deny they had anything to do with:

“On the same day the Oakland shooting occurred, a military veteran from Chittenden County committed suicide by shooting himself in the head. The incident occurred in an Occupy tent in City Hall Park, Burlington, Vermont. A similar tragic event occurred at the Salt Lake City Occupy encampment on Friday. A man was found dead in his tent. Police suspect he died from a combination of drug use and carbon monoxide.”

These incidents are being blamed on the occupations and may become the pretext for another effort to crush the movement. That could lead to bloody confrontations that the movement may not be able to win. Already, police are infiltrating, as this video makes clear.

At the same time, Occupy Wall Street may be facing a fork in the road as the protest movement wrestles with how to become a more effective political force.

The tension between achieving reforms through protests and promoting a deeper revolution is evident in intense debates and discussions that take place outside the park in churches and at an atrium at 60 Wall Street, a public space next to the Deutsche Bank building,

So at various points in the days, bankers leaving their offices unknowingly walk by intense circles of people in far funkier and more practical clothing huddled into circles to discuss strategies and tactics in work groups operating on principles of open discussion and an effort to find consensus.

Some activists are critical of too much internal discourse and not enough external outreach, especially to the communities hardest hit by the economic crisis. There are many meetings about coordination, facilitation and a “spokescouncil” that could supplant their open-to-all General Assembly,

Many are aware that the movement’s current base may not be more than 1 percent of the 99 percent they march in the name of. Maybe even less.

They know that their chances of securing the changes they want are tied to creating campaigns and organizing strategies that are less counter-cultural and more political, campaigns that can mobilize workers, communities of color and campuses struggling under the weight of student debt and bleak futures in the job market. This takes toning town some of the rhetoric political style that drives the movement.

Can this movement go beyond using the digital technologies that appeal to the young and the hip, and, also, shape a communications campaign with ads in newspapers and PSA’s and even political infomercials on Cable TV? This will be needed if the movement is to penetrate deeper into small towns, the suburbs and the “fly over” regions of Middle America.

Can it build organizations that people can join, and identify with?

At the moment, these “leaderless” activists see this approach as more manipulative that participatory but how else can they convince people unlike themselves people without histories of radical political activism or union militancy to feel comfortable in a youth dominated harder-edge movement with its unique mix of direct activism and small “d” democratic idealism?

Occupy is very strong when it comes to creative tactics, but what is the longer-term strategy? How will it have a change to shape and implement one?

I picked up a copy of scholar Gene Sharp’s how to make a non-violent revolution manual called “From Dictatorship To Democracy: A Conceptual Framework for Liberation” at the People’s Library in Zuccotti Park.

Now published in 34 languages, it offers a detailed primer on how people’s movement’s can topple tyrannies. It itemizes the ideas and techniques that powered movements in many countries including Egypt, Tunisia and Serbia. You can get it online from Gene Sharp’s Albert Einstein Institution.

The Serbian movement, OPTOR, that helped overthrow the Milosovic regime with protests in Belgrade have since become specialists in training activists and orchestrating uprisings. They have advised movements in Egypt, and some of their key people have had conversations and perhaps more interaction with Occupy Wall Street. (The General Assembly of Occupy is now sending one of its activists to Egypt.)

They do have a lot to teach using print, video and videogames. However, their work has raised eyebrows and led to suspicion, and even conspiracy mongering with “revelations” that their actions, which have included aiding the “Color Revolutions” in Ukraine and Eastern Europe are funded or directed by the CIA.

As a veteran CIA investigator, I am not persuaded by the “evidence” since Washington more often resembles “the gang that can’t shoot straight” than effective non violent change-makers. Washington’s dismal failures outnumber the few successes (which doesn’t mean these operatives don’t cause harm or negatively affect political outcomes).

There is a British-made film, “The Revolution Business” (Journeyman Pictures), with an unmistakable anti-American orientation that stirs fears of devious covert scenarios all made in the USA. You can watch it on You Tube.

Be mindful that all movements for social change have their own internal contradictions and rivalries, and that when movements develop traction, many forces want to use and manipulate them, including governments and groups with every point of view. Most don’t succeed.

You have to be careful about connecting dots that may seem to connect but in reality don’t. As critics of Freud said years ago, sometimes a cigar is just a cigar.

The question is: can Occupy Wall Street, with all its dynamism and commitment find ways to sustain itself and gain new momentum? I am betting that it will but movements can move on more than one track at the same time without compromising integrity. There is so much to do and so many people with whom to win over and engage.

News Dissector Danny Schechter writes about Occupy Wall Street on Al Jazeera, Progressive Radio Network other outlets and his newsdissector.com blog. He made the film Plunder the Crime Of Our Time. (Plunderthecrimeofourtime.com) Comments to dissector@mediachannel.org

6 comments for “‘Occupy’ Protests at a Crossroads”