The Christian Right talks about applying Biblical tenets to political issues, but ignores the most central of Jesus’s teachings standing with the poor, opposing financial elites and abhoring violence. The Vatican has now issued a reminder of those principles, as Daniel C. Maguire notes.

Medical alert: Right-wing Catholics, and that includes everyone from Reps. Paul Ryan and John Boehner to the majority of the U.S. Supreme Court, it is urgent that you stay on your meds because Pope Benedict’s Pontifical Council for Justice and Peace has just issued a stroke-precipitating document that will break your conservative hearts. 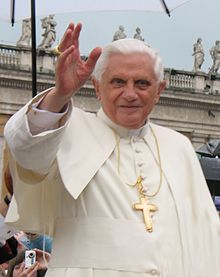 This narrow focus studiously ignores a whole tradition of left-wing Catholic social doctrine, espoused by popes and general councils of the church, which is well-grounded in the Bible.

Right-wing Catholics run from pronouncements about social justice just as they ran from “Blessed” Pope John Paul II when he presciently sent a Cardinal to tell President George W. Bush that an invasion of Iraq would be a “defeat for humanity.”

With the release of this new document, with the unwieldy title “Towards Reforming the International Financial and Monetary Systems in the Context of Global Political Authority,” the right-wingers are now running for cover again.

They’re claiming the document is not official. “The pope didn’t say it,” just some little old Vatican group off on a left-wing bender, as if one word of this document (which is filled with papal quotations) could slip out of the Vatican by night without the pope’s full blessing.

What this document does is to “carry forward the work of Jesus,” which he himself defined as “good news for the poor” (Luke 4:18 ). When the neocons in Nazareth heard that they wanted to throw him off a cliff.

But this new document is true to that Jesus mission. Nowhere did Jesus say, “by this shall people know you are my disciples, that you do not contracept!” No he said, if you love justice and peace as I do, if you are good news to the poor as I am, “then all will know that you are my disciples” (John 13:35).

It says we need globalized solutions for globalized problems; it favors a market economy but not this one; it calls for “supranational authority,” a healthy, non-tyrannical “world political authority” to tame the greed games that strip the poor and gorge the rich; it calls names, deriding “neoliberalism,” the neocons’ credo, as devoid of “moral perspective” and a writ for “collective greed.” It seeks to tax financial transactions to create a “world reserve fund.” Yes! Tax!

It moves beyond the tribal, selfish assumptions of “Westphalian” nation states and calls for a world community where differences would be respected and honored for the common good. The alternative to this is chaos and the gross inequalities that people are finally cluing into around the world and taking to the streets in response to.

There is nothing weird or radical about all this. What is radical is the status quo where the blood sweat and tears of the poor are on our clothes made in slave shops, and on our iPhones where thousands of Chinese in Shenzhen assemble them working 11-hour days for 83 cents an hour under brutal conditions. The wages are even lower in Vietnam, Cambodia and elsewhere.

Certainly, the popes and the Vatican are not without fault. They have squandered much of their moral authority by binging on issues where they have no privileged expertise, i.e. sexual and reproductive issues for which a life of real or purported celibacy is not the best preparation.

But this Vatican document is a gem of moral reasoning. It is hard-nosed justice theory applied to real life.

A final suggestion: along with the moratorium on sex talk, the Vatican should consider closing its bank, which has some issues of its own.

← Toward a Non-Violent Revolution
‘Occupy’ Protests Grow in Philadelphia →