Like the Arab Spring and Occupy Wall Street, the French Revolution began as a rejection of an unjust system where the few were obscenely rich and the many had little money or power. Where it went off-track was in its embrace of violence, a lesson today’s revolutionaries must heed, says Gary G. Kohls.

I was reading a book about Adolf Hitler, entitled The Psychopathic God, when I ran across a meaningful quote from a French Revolution-era author, diplomat and orator named Honore Mirabeau, describing his visit to the kingdom of Prussia.

Mirabeau wrote: “Prussia is not a country that has an Army; it is an Army that has a country.” That quote piqued my interest so I did some research into the realities in which Mirabeau found himself.

My initial thought was to write column about Prussian militarism and the alarming similarities to our own but instead decided to write about the French Revolution, particularly with the early phases of the current revolution going on around the world in the Occupy Wall Street and Arab Spring Uprising movements. There are many lessons to be learned.

Honore Mirabeau was one of the few voices of moderation and compromise during the early phases of the eventual mass slaughter that characterized the tragic French Revolution, which, if we will try to recall our inadequate high school world history books, we should remember began in 1789.

The French Revolution was partially inspired by the American Revolution which occurred a few years earlier. Both revolutions shook the complacent world of European kings and queens, not to mention dictators and assorted autocrats all around the world.

Honore Mirabeau was one of the political leaders in the early stages of the revolt in Paris, a time when nobody had yet decided what to do with the king and the kingdom. Mirabeau and his wise counsel died too soon – in 1791, before the Terror began – of either poisoning or heart complications from his previously diagnosed pericarditis.

Storming of the Bastille

The French Revolution was a mass movement against the tyranny and oppression of the monarchy and all the oppressive economic, police state and the politically and socially unjust structures that go with that reality.

Mirabeau earnestly searched for, in that polarized time in French history, some sort of non-violent compromise between the doomed members of the parasitic, predatory, aristocratic ruling classes (including King Louis XVI and his influential queen Marie Antoinette) and the many political factions that were jockeying for position in the power vacuum that followed the start of the revolution with the symbolic storming of the Bastille on July 14, 1789.

The Bastille was an infamous prison that was the hated symbol of all that was oppressive about the militarily-enforced, economically-oppressive, totalitarian regime of Louis XVI.

One could easily compare the Bastille to the seats of dictatorial power in the various Arab Spring nations or to Wall Street in 2011. All were logical symbolic targets of a long-suffering, enraged and increasingly hopeless people who had little to no say in the national political process and didn’t trust those in positions of authority.

All were obvious targets of those who had endured taxation without representation and who were victims of job insecurity, indebtedness from predatory lenders, arbitrary arrests, extra-judicial imprisonments and executions. All were definitely symbols of corporate exploitation, police harassment and harsh or unfair punishment for crimes.

Unfortunately, however, it was undisciplined mob violence that kick-started the French Revolution, which eventually turned into anarchy and civil war and the predictable retaliatory responses of various power factions, often using hired thugs and paid mercenary soldiers to commit serial atrocities against one another.

Violence and the desire for revenge are very human (but not very spiritual) responses to oppression. They were especially understandable then because the gap between the rich and the poor was vast and widening. The 99 percent who lived at the poverty level were constantly food-and-job insecure, with no access to affordable health care, the growing of their own food or being paid a livable wage.

The infamous pamphleteer (and eventually one of the doomed dictators) Jean-Paul Marat was an angry, pro-violent idealist who was also a single-minded power-seeker. When he eventually attained absolute political power, he became a psychopathic mass murderer. 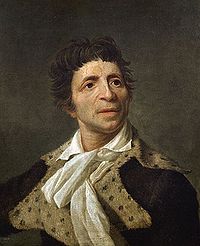 In one of his early pamphlets (1789), Marat wrote: “Rise up, you unfortunates of the city, workmen without work, street stragglers sleeping under bridges, prowlers along the highways, beggars without food or shelter, vagabonds, cripples and tramps cut the thumbs off the aristocrats who conspire against you; split the tongues of the priests who have preached servitude.”

Marat’s quote reminds me of a phrase I once heard: “The French Revolution will be complete when the last priest is strangled with the guts of the last lawyer.” I don’t recall exactly where I heard that one, but I hasten to add that I don’t agree with it. I do, however, understand where the sentiment came from.

Most of us who espouse the courageous, active nonviolent resistance to oppression of the type taught by Jesus, Gandhi and King will resonate with the first part of Marat’s quote but will be appalled by the last part.

The quote points out very nicely, however, what was one of the grave mistakes of the French Revolution, and that was the willingness to use homicidal violence to attain the goals of the famous motto of the revolution: “Liberty, Equality, Fraternity.”

(Actually the original motto was “Liberty, Equality, Fraternity or Death” but the “Death” part was judiciously dropped with the September Massacres, the Parisian Terror, the civil war and the mass beheadings the latter thanks to the “humane” invention of French physician Dr. J. I. Guillotin).

Marat’s apparent solidarity with the victims of an oppressive system was actually an incitement to mob violence and the overthrow of the existing system by those long-suffering people who genuinely yearned to be free.

Marat understandably miscalculated when he led the revolution in a violent direction. He had it wrong but, despite France being a Christian nation (Roman Catholicism was the state religion), few or none, even among the clergy in that era, understood the practicality or ethics of the nonviolence of Jesus.

Britain’s Lord Acton was similarly appalled when he wrote about the disastrous end results of the French Revolution. He authored the insightful and very truthful dictum that says: “Power corrupts and absolute power corrupts absolutely.” And that dictum applies to economic power, political power, military power, police power, sexual power, racial power, but not the power of love.

The French commoners knew all about crushing poverty, but they, like Marat, also knew who were the exploiters, the predators and the undeserving, over-privileged ones who were their overlords. They were the easily identifiable ones who were living a life of excess luxury wealth, living off the blood, sweat and tears of those just struggling to survive.

There were a number of well-fed elites in France who were living parasitically off the labor of the masses and the good graces of the royalty, whose money came from fees and taxes that were disproportionately assessed on the lower classes and often not paid at all by the wealthy.

The moneyed classes did a lot of partying, financial speculating and theatre-going and had no visible means of support other than their connections to the crown. They spent a lot of their leisure time counting their money, flaunting their wealth, managing their estates, drinking spirits, philandering and otherwise enjoying their leisure time.

Even institutions like the wealthy and powerful Catholic Church and its bishops were generally despised by the masses, as the Marat quote makes clear.

The less-than-useless aristocracy, the hereditary nobility and the wealthy landowners were equally hated, as were the greedy bankers and the investor classes that were always creating economic bubbles that eventually burst, usually hurting the innocent.

Other over-privileged groups who were dependent on the good graces of the king included the legal profession (lawyers and judges) and the King’s military, security forces and police establishments. They were the ones who enforced unjust laws and kept the impoverished, hopeless, starving and increasingly restless people under control.

The poor were derogatorily referred to as sans culottes (literally “without breeches”) and they feared the jackboot on their necks, the police baton on their skulls and the “knock on the door at midnight”.

There are numerous lessons to be learned from revolutions of the past, but the most important one for our revolutionary time is already being understood and implemented; and that is the truth that courageous, active, nonviolent revolutions in the mode of Jesus, Gandhi and King are the ones that the powerful and the violent find most difficult to overcome.

The agents provocateur, infiltrators and the armed mercenary thugs that are sent by corporations or the government to disrupt nonviolent demonstrations are signs of desperation among the ruling elite.

These enforcers of the establishment (that desperately wants the gravy train to keep on running smoothly) want to avoid criminal indictments or jail time. They prefer to be confronted by violent resistance, since they know how to deal with violence.

They can open fire, claiming that the protestors drew “first blood”. They have all the new-fangled, high-tech weapons and tactics to “mow down” or “disappear” protestors.

But the corporate and government enforcers are confused and uncertain as to how to deal with nonviolent direct action, especially when it is strengthened by the new media (the cell phone, FaceBook, Twitter and internet era).

Then, they may not dare to use the classic police state fascism methods of crowd control. And they know that they do not have the capacity or the resources to arrest everybody or imprison everybody. Leaderless mass movements can’t be decapitated or disappeared.

What the world needs now, and what the Occupy Wall Street and Arab Spring Uprising movements are wisely providing, is not a movement led by a single major prophet that can be easily silenced by assassination or arrested. Such movements are easily stopped (a la Jesus, Gandhi, MLK, Wellstone).

What the world is seeing and applauding today are movements led by a million minor prophets that are too numerous to deal with by violent police repression.

Note: for an excellent YouTube video about the French Revolution, from British comedian, Mark Steel, check out:  http://www.youtube.com/watch?v=iHsdGdrAPWw&feature=related

Dr. Gary G. Kohls is a retired physician who practiced holistic mental health care, dealing extensively with the totally preventable and difficult to treat reality known as posttraumatic stress disorder, which is always a consequence of violence. He is a member of the Community of the Third Way (a local Every Church A Peace Church affiliate) and the Just Peace Committee of Peace Church UCC in Duluth, Minnesota.

7 comments for “Toward a Non-Violent Revolution”