Exclusive: In two months, the Iraq War at least the eight-year U.S. phase will be over. President Barack Obama promises the last troops will be home for the holidays. Then, Americans may finally reflect on this bloody imperial disaster. So the neocons are busy rewriting the war’s narrative, Robert Parry reports.

With President Barack Obama’s announcement of a complete U.S. military withdrawal from Iraq, the neoconservative editors of the Washington Post immediately got to work rewriting the narrative of the Iraq War, shifting the blame for the eight-year strategic disaster onto him.

That is the message of Sunday’s lead editorial in which the Post joins with the neocon-advised Republican presidential candidates in setting Obama up for the fall in the likely event that the horrendous political violence in Iraq gets even worse. 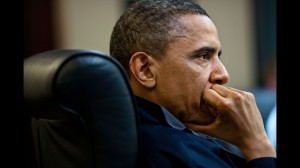 The solution favored by the Post’s editors and the Republicans is to continue the U.S. military occupation of Iraq indefinitely, just as they want a similar open-ended war in Afghanistan and sought a more aggressive U.S. military role in Libya. Simply put: Spare no expense in the blood of U.S. soldiers and the dollars of U.S. taxpayers.

And, since the neocons retain enormous influence in the opinion circles of Official Washington, they will likely have a great deal of success in rewriting the history of the Iraq War into one that depicts a brilliant neocon “victory” squandered by the reckless “peaceniks” surrounding Obama.

The neocon message is this: If only Obama had listened to us like George W. Bush did everything would have worked out just wonderfully. However, since he didn’t, Obama will have to shoulder the blame for what the world will see as a humiliating U.S. retreat from Iraq.

The neocon corollary is that only a Republican president most likely Mitt Romney or Rick Perry can restore American grandeur in the world. Both Romney and Perry have surrounded themselves with neocon advisers, such as Eliot Cohen and Robert Kagan who are guiding Romney’s foreign policy.

Romney essentially contracted out his foreign policy to the neocons who produced his campaign manifesto, “An American Century.” The title is an homage to the neocon Project for the New American Century, which in the 1990s built the ideological framework for the Iraq War and other violent “regime change” strategies pursued by Bush.

Cohen, who wrote the manifesto’s foreword, was a founding member of the Project for the New American Century and a protÃ©gÃ© of prominent neocons Paul Wolfowitz and Richard Perle.

On the campaign trail, Romney briefly deviated from the prescribed neocon path with comments that U.S. troops in Afghanistan should be withdrawn “as soon as we possibly can” and that the war showed Americans “cannot fight another nation’s war of independence.” He was promptly upbraided by the Post’s editors and quickly fell back into line.

So, after Obama’s announcement on Friday that the remaining U.S. troops would be withdrawn from Iraq by the end of the year, Romney lashed out with a harsh denunciation fashioned by his neocon team. He said Obama let his decision be driven either by “naked political calculation or simply sheer ineptitude in negotiations with the Iraqi government.”

Also toeing the neocon line, Perry charged that Obama had put “political expediency ahead of sound military and security judgment” in agreeing to leave Iraq.

Then, on Sunday, the Post’s neocon editors joined the furor, portraying Obama’s withdrawal as shortsighted and foolhardy.

The editorial noted that the war will end for U.S. soldiers, but “Iraqi insurgents, including al-Qaeda, continue to wage war against the country’s fragile democratic government; Iran sponsors its own militias and has been accelerating its effort to dominate its neighbor.

“Mr. Obama’s decision to carry out a complete withdrawal sharply increases the risk that painfully won security gains in Iraq will come undone; that Iran will be handed a crucial strategic advantage in its regional cold war with the United States; and that a potentially invaluable U.S. alliance with an emerging Iraqi democracy will wither.”

The Post’s editors claimed that Obama had given in to political advisers who wanted him to fulfill his campaign pledge of a complete U.S. military withdrawal, rather than heed the advice of military commanders who wanted to extend the U.S. occupation with 18,000 or so troops.

The Post wrote: “The next year or two will show whether that calculation is correct. In the meantime Mr. Obama will surely boast on the campaign trail, as he did Friday at the White House, that he has fulfilled his 2008 pledge ‘to bring the war in Iraq to a responsible end.’ End it will, for Americans if not for Iraqis; as for ‘responsible,’ count us among the doubters.”

In other words, the Post’s editors, who propagandized for the Iraq invasion in 2002-03 by repeating the Bush administration’s false claims about Iraq’s WMD and links to al-Qaeda, have now distanced themselves from any responsibility for the strategic disaster that the Iraq War has created.

You see, by extending the U.S. occupation indefinitely even in defiance of conditions set by the Iraqi government Washington could presumably hold off the day when Americans will fully recognize what a catastrophe the Iraq War was. As long as that day could be postponed, the neocons could hold themselves out as worthy foreign policy experts.

But now the day is fast approaching when the U.S. occupation will end and the full scope of the dismal failure will become apparent. So, the ever-clever neocons are shape-shifting the Iraq War narrative to pass the blame for the $1 trillion catastrophe and the deaths of nearly 4,500 U.S. soldiers and hundreds of thousands of Iraqis onto Obama.