If he was prime minister of the United Kingdom today, perhaps Julian Assange would have been free already. But it’s never too late. So it’s my great pleasure to present Jeremy Corbyn today in Washington, DC.

Thank you, Srecko. And thank you, Amy, for presiding over today’s event in this amazing setting of the National Press Club, where Julian Assange revealed uncomfortable truths to the world about the murder, the murder of innocent civilians in Iraq by specific military orders to do so, knowing full well they were breaking the law.

What’s Julian charged with? Telling the truth. Telling the truth all over the world about what governments do and what governments want to hide from. I’m an elected politician. I’m very well aware that elected politicians don’t like being questioned on the decisions that they make. But it’s fundamental to a democratic society that they are constantly under surveillance and under question. 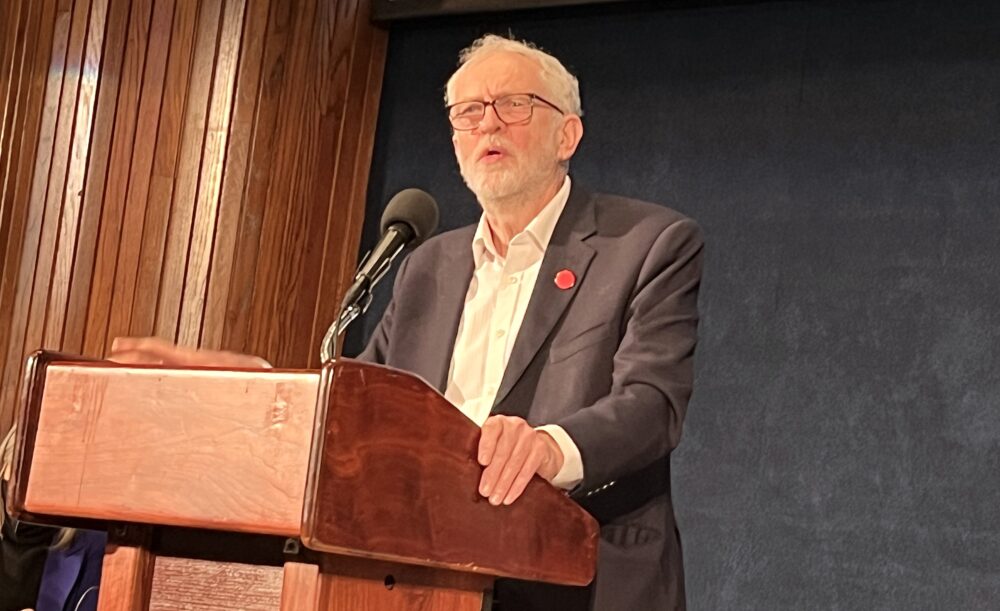 And so Julian published through WikiLeaks huge volumes of information. He went to extraordinary lengths to anonymise the sources and protect the sources. At the same time, he was extremely responsible in his journalistic approach to this, and the way his character has been denigrated all over the world is a shame and a disgrace. He’s threatened with the Espionage Act, the Espionage Act for somebody who revealed truths.

He’s being held in His Majesty’s prison, Belmarsh in south East London. I visited that prison on previous occasions, to visit prisoners there. It is an awful place. It is a brutal place. It is a place devoid of humanity. And he is stuck there. Not a convicted criminal, but a remand prisoner who is potentially awaiting trial.

He’s the only one in that category in that particular prison. Now, he is accused and WikiLeaks are accused of damaging the interests of the US government, of the British government, of the French government. And actually, if you plow through the tens of thousands of documents there, you’ll find they’re pretty embarrassing to pretty much every government in the world, including, as a matter of fact, the government of Russia as well, because Julian wanted the truth out about what powerful nations do to people without power who are victims of their exercise of that power.

So he also exposed the way that desperate, poor migrant people faced dangers in the Mediterranean, the English Channel and so many other places. And so our plea is here today about support for Julian. But I say this to journalists who may be watching this around the world. You might say, well, okay, that’s Assange. That’s different. That’s the way. 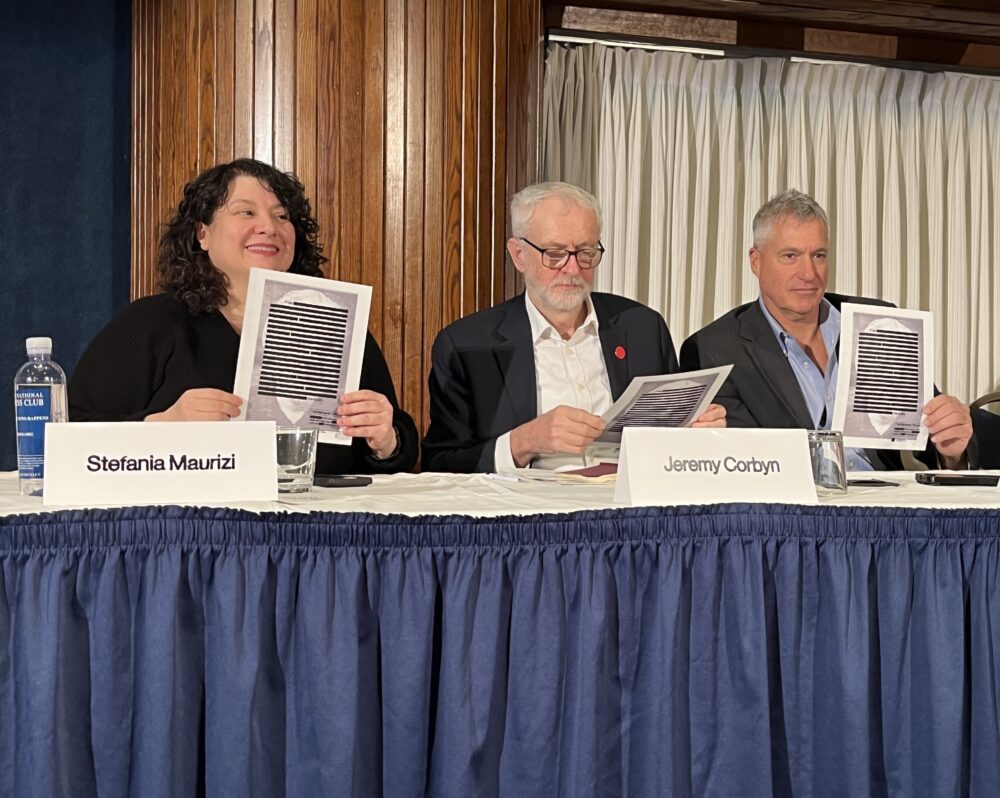 Sorry, it’s not. It’s YOU as a journalist because if Julian Assange ends up in a maximum security prison in the United States for the rest of his life, every other journalist around the world will think: “Oh, should I really report this information I’ve been given? Should I really speak out about this denial of human rights, a miscarriage of justice in any country around the world? Because the long arm of the United States espionage might reach me and an extradition treaty might put me in that same prison.”

And democracy functions better as a result. Now, as I said, I’m an elected politician. And what worries me is the silence of so many fellow elected politicians around the world. So my plea here today is this: You have been elected by an electoral democratic process. The people who elected you place their faith and their trust in you to speak up for them and their democracy. 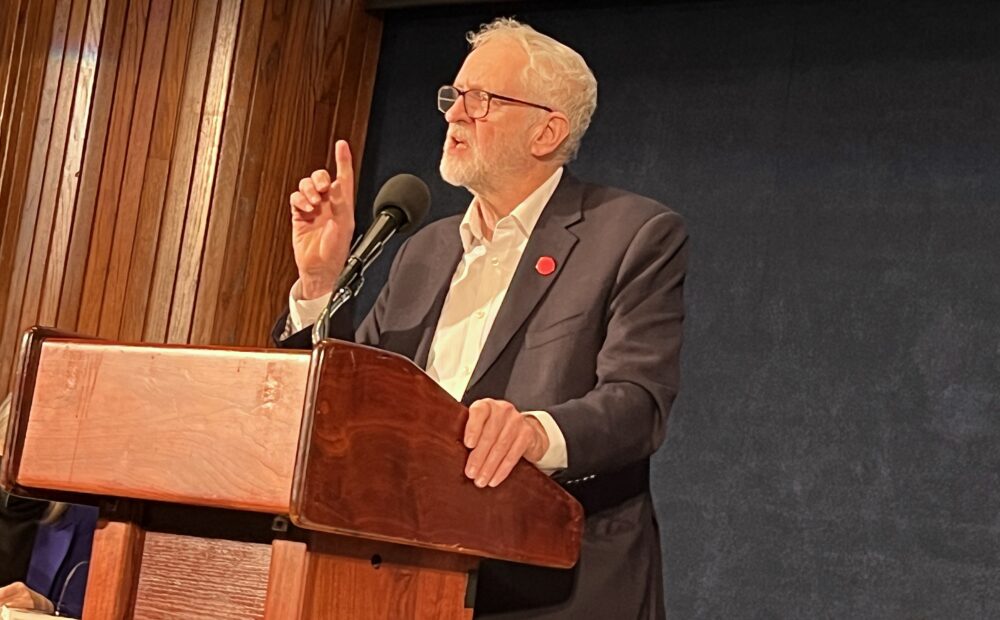 But I appeal to elected politicians in the United States, speak up to defend democracy, speak up against the powers of the Espionage Act, and speak up for Julian Assange, because our human rights are under threat all over the world. The rollback of the advances of the Universal Declaration of Human Rights, the European Declaration of Human Rights, European Convention on Human Rights and many others are under threat at the present time.

Our actions around the world in support of Julian, in support of the right to know, can and I believe will change the course of what’s going on. So let’s get a message out here today from this National Press Club in Washington.

We are bearing witness to a travesty of justice, to an abuse of human rights, to a denial of freedom of somebody who bravely put himself on the line that we all might know that the innocent died in Abu Ghraib, the innocent died in Afghanistan, the innocent are dying in the Mediterranean, and innocents die all over the world where unwatched unaccountable powers decide it’s expedient and convenient to kill people who get in the way of whatever grand scheme they’ve got.

We say no. That’s why we are demanding justice for Julian Assange. Hear the call. Let’s free Julian Assange and we will all be safer as a result of that. Thank you very much.

4 comments for “Corbyn: Elected US Leaders Must Defend Assange”