Republicans’ deal-making was democracy in action, writes Margaret Kimberly. By contrast so-called House progressives did nothing for Medicare for All during the 2021 speaker vote. 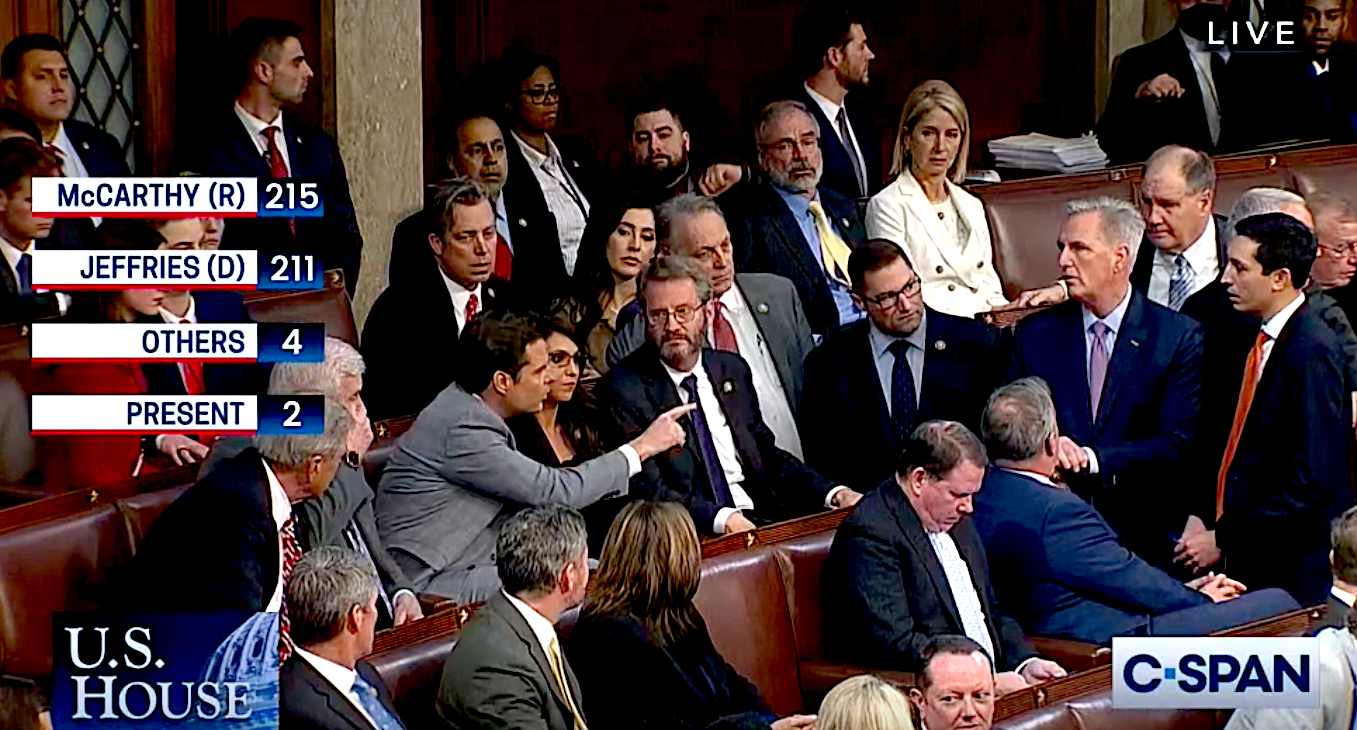 Republican Leader Kevin McCarthy, second from right, negotiates with Rep. Matt Gaetz, in gray suit, on House floor on Jan. 6 during a vote on McCarthy for speaker. (C-Span)

In 2021 Democratic Party progressives asked those members of Congress who claimed to share their political priorities to stand up to their leadership, which meant standing up for the people.

Those progressives knew that President Joe Biden promised to veto any legislation providing free, universal healthcare, known as Medicare for All. But they did what any political activist should do. They made the demand anyway.

The call to #ForcetheVote was a request for House members to withhold their votes for Nancy Pelosi as speaker of the House unless she committed herself to bringing Medicare for All to a vote.

The House members who called themselves progressives did nothing of the sort. They elected Nancy Pelosi without demanding that she bring Medicare for All or any other issue for a vote. The Squad and the Progressive Caucus both failed to do what their supporters wanted.

In 2023 a different dynamic took place. Republicans won control of the House in the 2022 midterm elections. Some of their members, such as Lauren Boebert and Matt Gaetz, are considered lesser lights and are routinely dismissed by Democratic pundits and propagandists as being dumb, crazy or a host of other epithets.

Whatever one can say about them, they did something that Squad members did not. They withheld their votes from Kevin McCarthy, who needed 15 ballots to become speaker of the House, a record in congressional history. The process was messy, the word “chaos” was used a lot and social media memes making fun of McCarthy and the Republicans proliferated.

There was a lot of finger-pointing and snobbery about the Republicans, but there was far too little analysis. Delving into the story in a truthful way would have meant dredging up the progressive Democrats’ shameful behavior two years ago and exposing them to the level of critique that Boebert and Gaetz received. 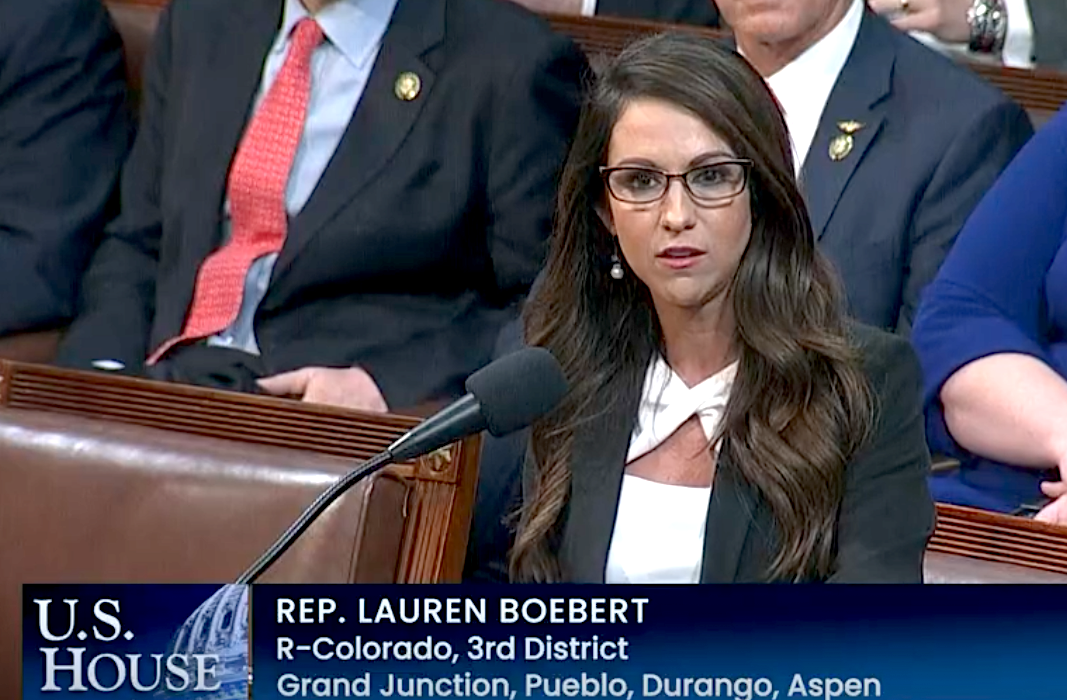 Not only did Democratic progressives run for cover when their leadership dropped the hammer, but they lied in order to hide their cowardice.

Rep. Alexandria Ocasio-Cortez and others claimed that they would lose the speakership to Republicans unless they all stayed on board. “We are just an extremely slim amount of votes away from risking the speakership to the Republican Party. It’s bigger than any one of us.”

The Republicans are currently doing what I was told could not be done & was performative, they are extracting concessions for their vote for speaker!!! Or as @AOC calls it “violence!” pic.twitter.com/ZOLTSoAuMC

This statement was a bald-faced lie meant to keep liberals in line. Republicans didn’t lose the speakership to the Democrats despite taking 15 rounds of voting to select McCarthy. The overly hyped congresswoman known as AOC was doing the leadership’s bidding and protecting herself from criticism.

Actually, she may not have needed to lie. Many Democrats behave like cult members, mesmerized and hypnotized by con artists, living in fear of making any demands on any issue. They easily give in and have been indoctrinated into thinking they can never make political change.

AOC: I think what was important today was to send the message that we were united and that there would be no defections, that Democrats are here, we are not going anywhere — and if they want to play ball, we are open to that. pic.twitter.com/ECKHMOcIua

Now Joe Biden is sitting in the political catbird seat. He can wheel and deal and triangulate to his heart’s content, which is what Democratic presidents actually prefer. They don’t want to provide Medicare for All or student loan debt relief, or a minimum wage increase. Biden can now feign powerlessness; the propagandists will join him in declaring that his hands are tied because Republicans control the House.

Republicans like Boebert will be scrutinized and caricatured so that Democrats can make fun and/or scare their people into shutting up. But it is actually more important to watch AOC and her cohort. Boebert and company are just the bogeywomen and men of the moment who provide a convenient cover for liberals the next time they are ready to perform another stab in the back. Phony progressives are a far worse enemy.

In the final analysis, the Republicans’ deal making was democracy in action. Elected representatives debated and challenged one another. Most importantly, party leadership faced a challenge they couldn’t avoid.

This country would be far better off if the people who claimed to be progressive had acted likewise in 2021 instead of taking a dive when they should have been willing to confront.

Oddly enough, one of the demands that McCarthy met was a proposal to cut the federal budget to FY2022 levels. Such a cut would mean a $75 billion cut to military spending . Of course, Republicans don’t really want to do that. The military industrial complex survives with bipartisan support. But inadvertently the Republican renegades revealed how much their Democratic Party colleagues have increased defense spending.

This year on Jan. 16, Democrats and Republicans alike will fan out across the country and claim to pay homage to the memory of Dr. Martin Luther King, Jr. King broke with President Lyndon Johnson when he denounced the Vietnam war, and was roundly criticized for doing so.

The progressives of today possess none of his courage and go along with their party’s oligarchy when ordered to do so. The right wingers on the other side of the aisle seem to have far more conviction.

Margaret Kimberley is the author of Prejudential: Black America and the Presidents. You can support her work on Patreon  and find it on Twitter and Telegram. She can be reached via  margaret.kimberley@blackagendareport.com.