The expedited legislation passed by Congress to avert a strike by railroad unions dealt one more blow in the decades long war waged by the two ruling parties against the working class. 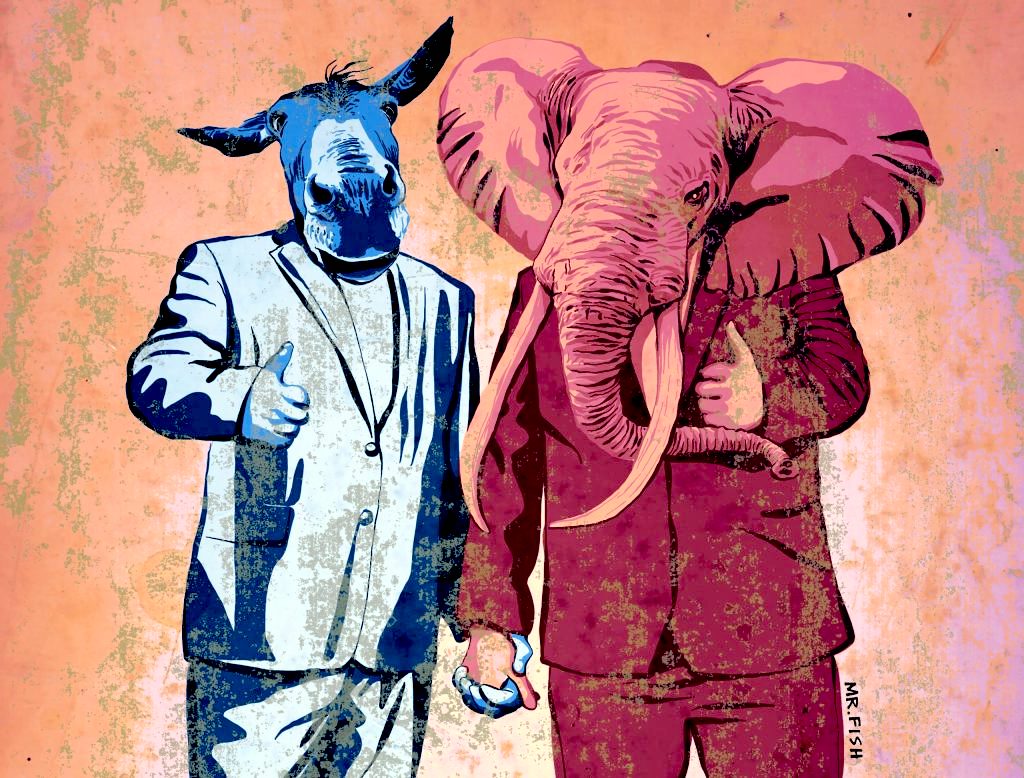 The congressional decision to prohibit railroad workers from going on strike and force them to accept a contract that meets few of their demands is part of the class war that has defined American politics for decades.

The two ruling political parties differ only in rhetoric. They are bonded in their determination to reduce wages; dismantle social programs, which the Bill Clinton administration did with welfare; and thwart unions and prohibit strikes, the only tool workers have to pressure employers.

This latest move against the railroad unions, where working conditions have descended into a special kind of hell with massive layoffs, the denial of even a single day of paid sick leave, and punishing work schedules that include being forced to “always be on call,” is one more blow to the working class and our anemic democracy.

The rage by workers towards the Democratic Party, which once defended their interests, is legitimate, even if, at times, it is expressed by embracing proto-fascists and Donald Trump-like demagogues.

Dating back to the Clinton administration with NAFTA, the greatest betrayal of the working class since the 1947 Taft-Hartley Act, the Democratic Party has become a full partner in the corporate assault on workers. The cloying feel-your-pain rhetoric, a staple of the Joe Biden White House, is offset by a hypocritical subservience to the billionaire class.

In 1926, the havoc wreaked by rail strikes led to the federal government passing the Railway Labor Act to give itself the power to impose labor settlements on the rail industry. The Biden administration used this authority to broker a tentative labor agreement that would ensure a 24 percent pay increase by 2024, annual $1,000 bonuses and a freeze on rising health care costs.

But workers would be permitted only one paid personal day and no paid sick leave. Of 12 unions voting on the deal, four of them — representing 56 percent of union membership in the industry — refused to ratify it. Biden signed the legislation into law on Friday. 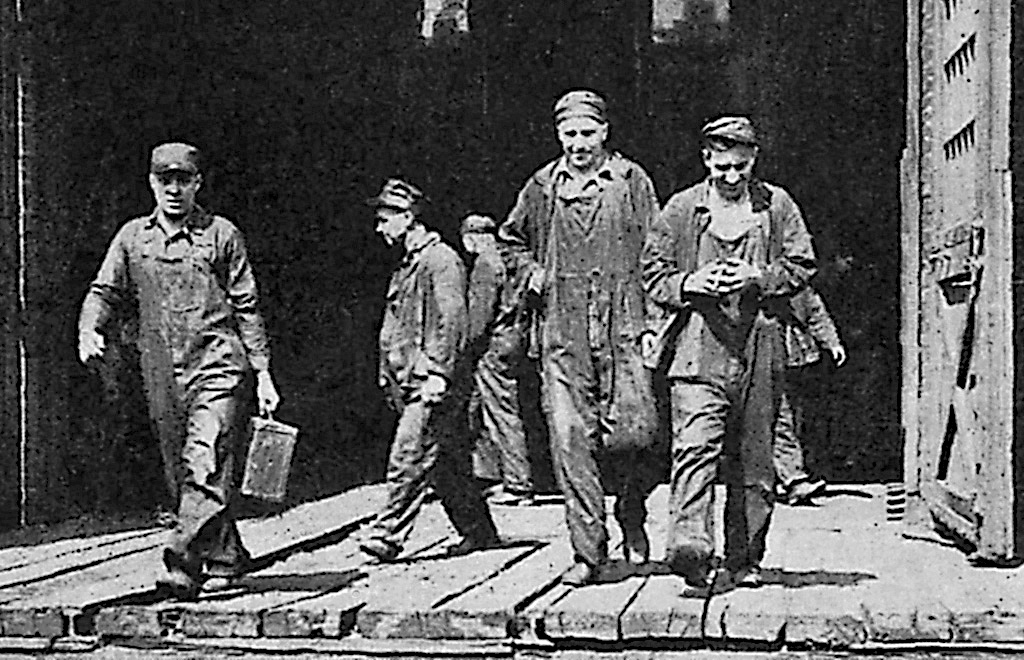 The railroad barons refuse to permit sick days because they have stripped the railroads down to skeleton crews in a process known as precision scheduled railroading, or PSR. In essence, no spare labor is available, which is why the reduced labor force is subjected to such punishingly short periods of time off and onerous working conditions.

Class struggle defines human history. We are dominated by a seemingly omnipotent corporate elite. Hostile to our most basic rights, this elite is disemboweling the nation; destroying basic institutions that foster the common good, including public schools, the postal service and health care; and is incapable of reforming itself.

The only weapon left to thwart this ongoing pillage is the strike.

Workers have the collective power to slash profits and cripple industry, which is why the ruling class has gone to such lengths to defang unions and outlaw strikes. A rail freight strike, it is estimated, would cost the U.S. economy $2 billion a day, with daily losses increasing the longer a strike continued.

The few unions that remain — only 10.7 percent of the workforce is unionized — have been largely domesticated, demoted into obsequious junior partners in the capitalist system. As of January 2022, private-sector unionization stood at its lowest point since the passage of the National Labor Relations Act of 1935. And yet, 48 percent of U.S. workers say they would like to belong to a union.

Railroad workers have been especially hard hit. The workforce has shrunk from nearly 540,000 in 1980 to some 130,000 today. The consolidation of the rail industry means there are only seven Class I freight companies, with four of those companies controlling 83 percent of rail traffic.

Service on the nation’s rail lines, along with working conditions and wages, has deteriorated as Wall Street squeezes the big railroad conglomerates for greater and greater profits. Indeed, the fragility of the rail system led to huge backlogs and delays during the pandemic.

The Democrats insist they are the party of the working class. Joe Biden calls himself “a proud pro-labor president.” But they pile up one empty promise after another.

In 2020, they promised, for example, that with control of the White House and both branches of Congress, they would pass a law to strengthen collective bargaining. Instead, they revoked the collective bargaining power of one of the few unionized industries that retains it. 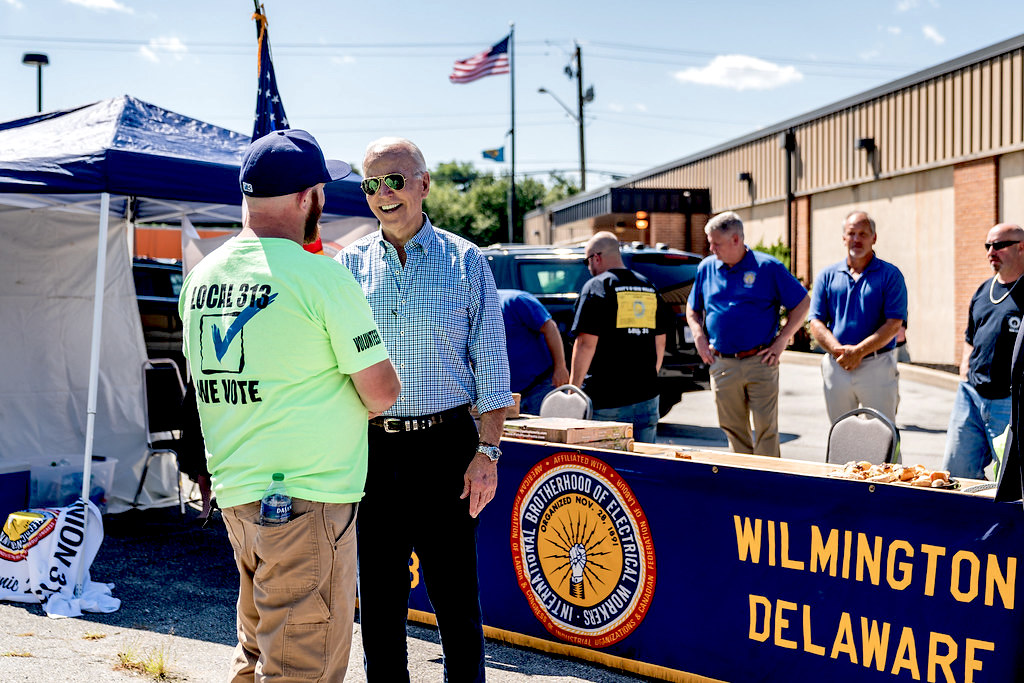 They promised to raise the minimum wage. They failed. They promised a national paid family and medical leave program allowing all employees to take up to 12 weeks of paid time off. It never happened.

They promised to impose a federal tax rate on corporations ranging from 21 percent to 28 percent, so that “wealthy Americans and big corporations pay their fair share.” The proposed tax increase was scuttled.

They promised to pass legislation to ensure that super PACs “are wholly independent of campaigns and political parties.” It went nowhere. They then mounted a midterm election campaign, which cost both parties a staggering $16.7 billion and was funded by massive infusions of PAC money.

The Democrats routinely say the right thing and do the wrong thing, and this is true for its tiny progressive minority, which dutifully votes to funnel billions to the war industry, including the war in Ukraine.

Alexandria Ocasio-Cortez and most other progressive House members voted for the anti-union legislation while also voting for a separate resolution that would have given rail workers seven days of paid sick leave. The unions were demanding 14.

The second resolution died in the Senate, as they knew it would, leaving workers with a woefully inadequate, pro-management deal that over half of them had already rejected. To his credit, Bernie Sanders voted against the bill when the sick leave amendment from the House, which he backed, was rejected in the Senate.

Why does any legislator believe railroad workers should be forced to use what few vacation days they may have if they fall sick and request permission to be absent days in advance, as if illnesses are scheduled events? Congress members and their staff do not work under these conditions. 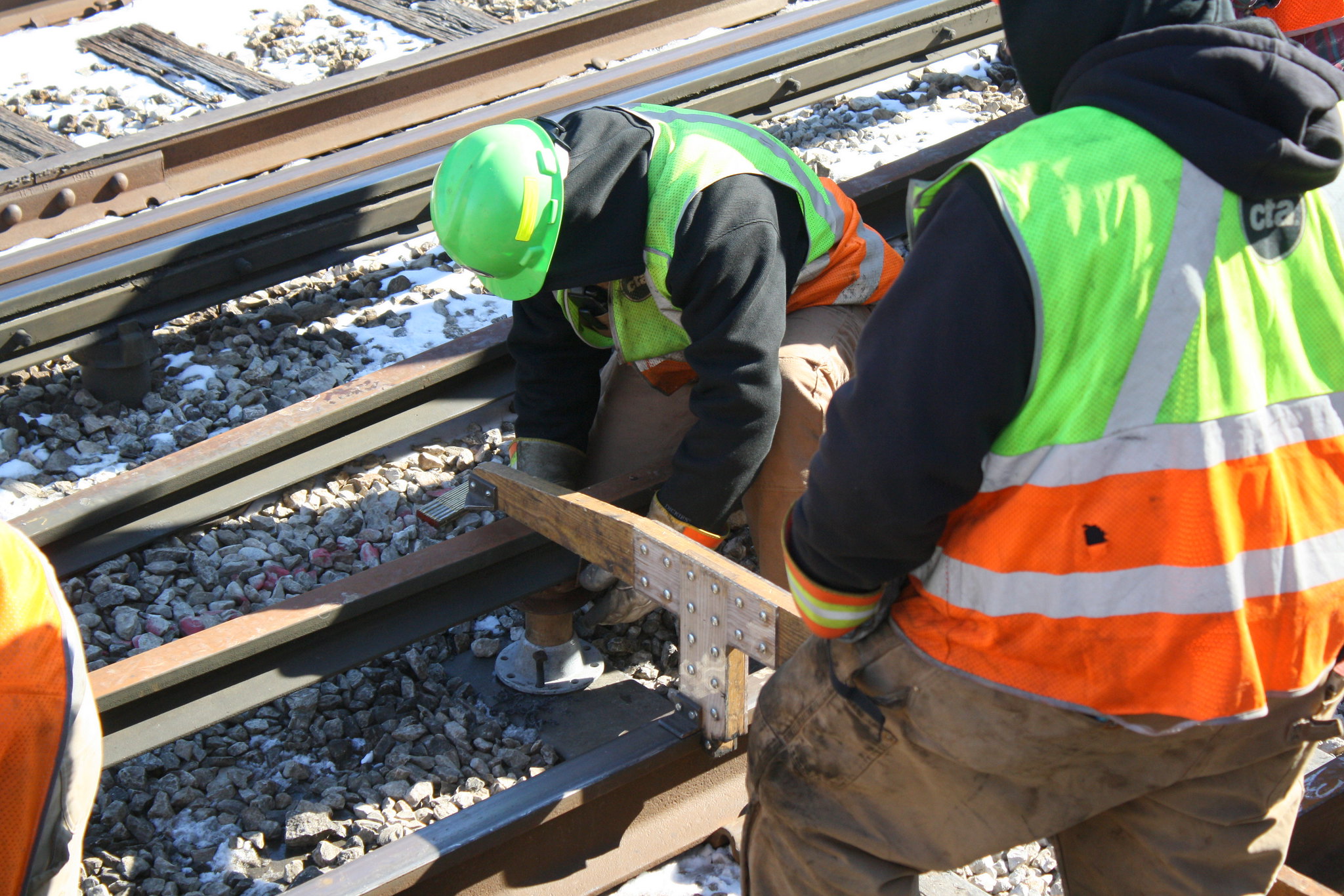 “In a statement that perfectly captured the yawning gap between Democratic Party rhetoric and behavior,” Binyamin Appelbaum, the lead writer on economics and business for The New York Times editorial board, wrote in the newspaper,

“House Speaker Nancy Pelosi denounced railroad companies as rapacious profiteers who ‘have been selling out to Wall Street to boost their bottom lines, making obscene profits while demanding more and more from railroad workers.’ Then, just one sentence later, she announced that House Democrats would stand with the profiteers.”

What are we to make of a Congress that refuses to support a single day of paid sick leave for 115,000 freight railroad workers, while the combined net income of the railroad industry is $27 billion — double what it was in 2013?

What are we to make of a Congress that in its latest military policy legislation sets the appropriation at $45 billion above the Pentagon’s request?

What are we to make of a Congress that refuses to pass gun control legislation despite 600 mass shootings this year, more than one per day?

What are we to make of a Congress that defunds the Internal Revenue Service, making it only practical to investigate those earning middle and lower incomes and near impossible to investigate tens of billions of dollars in tax evasion by corporations and the rich?

What are we to make of a Congress that rewrites the tax code on behalf of lobbyists so 55 of the largest corporations that collectively made over $40 billion in pre-tax income in 2020 — paid no federal income tax and received $3.5 billion in tax rebates?

What are we to make of a Congress, more than half of whose members are millionaires, who flagrantly use their committee assignments, inside knowledge of proposed legislation and classified intelligence reports to carry out insider trading to increase their wealth?

House Speaker Nancy Pelosi’s husband invested millions of dollars in computer-chip stocks as the Democratic leadership was formulating a plan to subsidize the chip-manufacturing industry.

Most political theorists, including Aristotle, Niccolò Machiavelli, Alexis de Tocqueville, Adam Smith, Karl Marx, Karl Polanyi and Max Weber, started from the premise that there is a natural antagonism between owners and workers. They understood that if the oligarchs shook off all restraints to the accumulation of wealth, it would destroy the political order.

The ruling class masks its greed behind ideologies — in our nation’s case, free market capitalism and neoliberal globalization. Neoliberalism never made any economic sense. But it was disseminated by compliant academics, the media and political theorists because, to quote Marx, it allowed “the dominant material relationships” to be “grasped as ideas.” 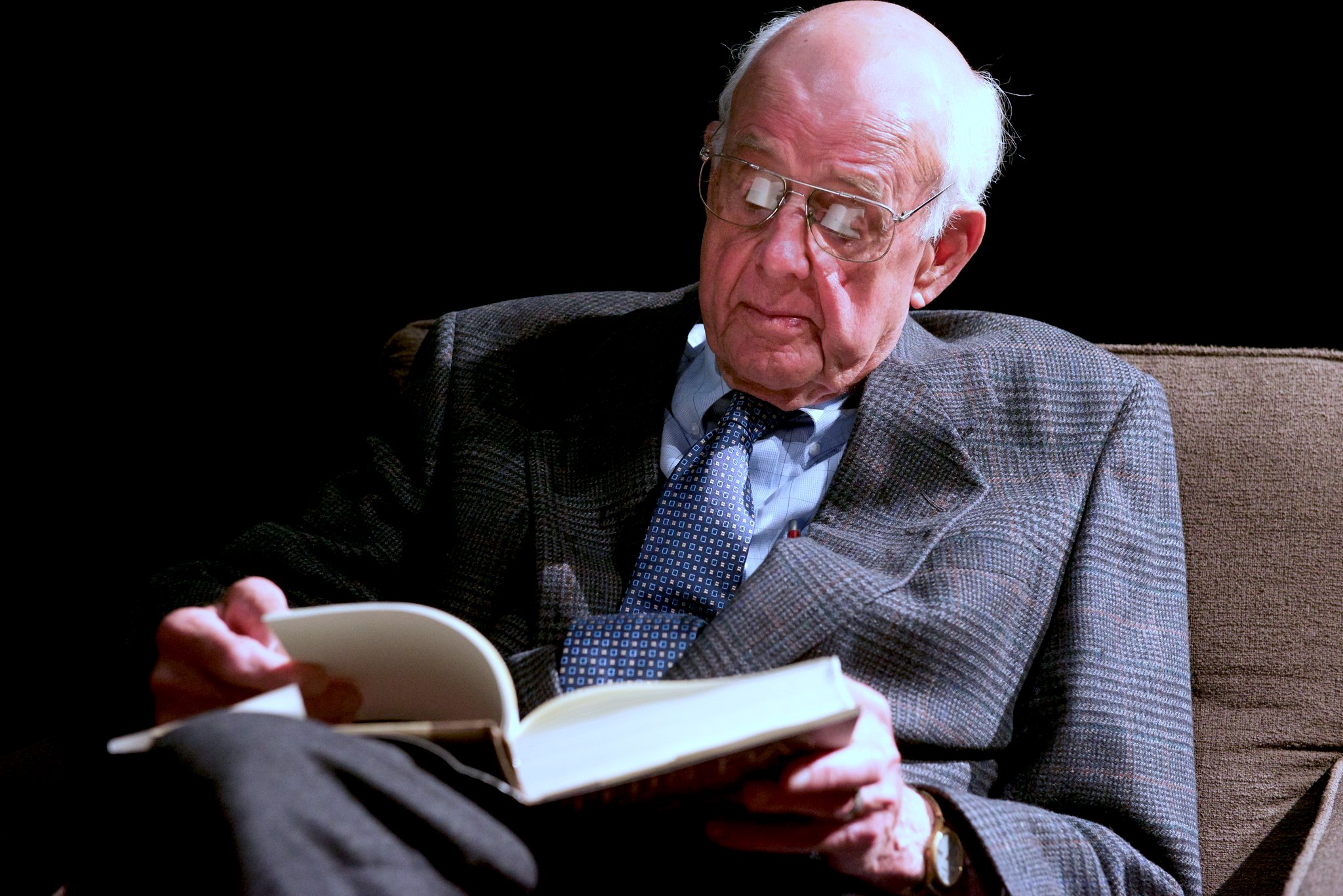 “We Americans are not usually thought to be a submissive people, but of course we are,” Wendell Berry wrote.

“Why else would we allow our country to be destroyed? Why else would we be rewarding its destroyers? Why else would we all — by proxies we have given to greedy corporations and corrupt politicians — be participating in its destruction? Most of us are still too sane to piss in our own cistern, but we allow others to do so, and we reward them for it. We reward them so well, in fact, that those who piss in our cistern are wealthier than the rest of us. How do we submit? By not being radical enough. Or by not being thorough enough, which is the same thing.”

All the advances we made in the early 20th century through union strikes, government regulation, the New Deal, a fair tax code, the courts, an alternative press and mass movements have been reversed.

The oligarchs are turning American workers — as they did in the 19th century steel and textile factories — into serfs, kept in check by onerous anti-union laws, militarized police, the world’s largest prison system, an electoral system dominated by corporate money and the most pervasive security and surveillance apparatus in human history.

Let us hope that defying Congress, freight railroad workers carry out a strike. A strike will at least expose the fangs of the ruling class, the courts, law enforcement and the National Guard, much as they did during labor unrest in the 20th century, and broadcast a very public message about whose interests they serve. Besides, a strike might work.

← WATCH: Pilger on the Fall of the British Press
Taxing the Rich Requires More Than Policy →