A comment from an editor at the Associated Press epitomizes the danger mainstream media creates with its routine deference to intelligence sources, writes Caitlin Johnstone. 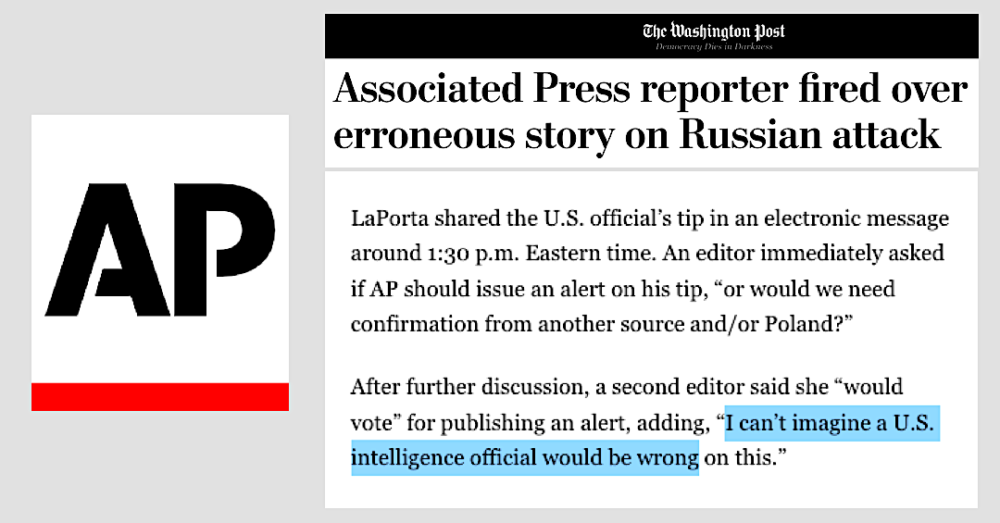 The Associated Press journalist who reported a U.S. intelligence official’s false claim that Russia had launched missiles at Poland last week has been fired.

AP subsequently retracted its story as the mainstream political/media class came to accept that it was in fact a Ukrainian missile that had struck Poland.

AP’s firing of reporter James LaPorta looks at this time to be the end point of any accountability for the circulation of this extremely dangerous falsehood.

AP spokesperson Lauren Easton says no disciplinary action will be taken against the editors who waved the bogus story through, and to this day the public has been kept in the dark about the identity of the U.S. official who fed such extremely egregious misinformation or disinformation to the public through the mainstream press.

Important that AP accounts for publishing the false claim that Russia fired missiles into Poland. But the much more important task is finding out why an anonymous senior US intelligence official fed AP that false claim. https://t.co/6YmAn0VDap

It is utterly inexcusable for AP to continue to protect the anonymity of a government official who fed them such a profoundly significant falsehood.

This didn’t just affect AP staff, it affected the whole world; we deserve to know what happened and who was responsible, and AP has no business obstructing that knowledge from us.

LaPorta’s firing looks like this is yet another instance where the least powerful person involved in a debacle is being made to take the fall for it.

A powerful intelligence official will suffer no consequences for feeding false information to the press — thereby ensuring that it will happen again — and no disciplinary action will be taken against LaPorta’s superiors, despite the absolute buffoonery that subsequent reporting has revealed on their part.

“Internal AP communications viewed by The Post show some confusion and misunderstanding during the preparations of the erroneous report.

LaPorta shared the U.S. official’s tip in an electronic message around 1:30 p.m. Eastern time. An editor immediately asked if AP should issue an alert on his tip, ‘or would we need confirmation from another source and/or Poland?’

After further discussion, a second editor said she “would vote” for publishing an alert, adding, ‘I can’t imagine a U.S. intelligence official would be wrong on this.’”

The AP fired the reporter but not the editor who, apparently, will literally believe and publish anything a US intelligence official tells her. https://t.co/eqso6p8Lu5 pic.twitter.com/LdpXVyRUnQ

“I can’t imagine a US intelligence official would be wrong on this.”

Can you imagine not being able to imagine a U.S. intelligence official being wrong?

These are the people who publish the news reports we read to find out what’s happening in the world. This is the baby-brained level of thinking these people are serving the public interest with.

“Skepticism about official claims should always be the watchword for journalists and analysts. These are claims that need more scrutiny than usual rather than less. If you can’t imagine that an intelligence official could get something important wrong, whether by accident or on purpose, you are taking far too many things for granted that need to be questioned and checked out first.

Whether the AP’s source was feeding them a line or was simply mistaken, a claim as provocative and serious as this one should have been checked out much more thoroughly before it got anywhere near publication. The AP report in this case seems to have been a combination of a story that was “too good to check” and a culture of deference to official sources in which the editors didn’t feel compelled to make the effort to check.”

"If you can’t imagine that an intelligence official could get something important wrong, whether by accident or on purpose, you are taking far too many things for granted that need to be questioned and checked out first." https://t.co/u6VWdxsOG3 https://t.co/4D7S9PisM3

Indeed, the only reason the press receive such explicit protections in the U.S. Constitution is because they are supposed to hold the powerful to account.

[In his 1971 opinion in the Pentagon Papers case, U.S. Supreme Court Justice Hugo Black wrote: “In the First Amendment the Founding Fathers gave the free press the protection it must have to fulfill its essential role in our democracy. The press was to serve the governed, not the governors. The Government’s power to censor the press was abolished so that the press would remain forever free to censure the Government.”]

If the editors of a wildly influential news agency will just unquestioningly parrot whatever they are fed by government officials while simultaneously protecting those officials with anonymity, they are not holding the powerful to account, and are in fact not meaningfully different from state propagandists.

They are state propagandists. Which is probably why they are sipping lattes in the AP newsroom while Julian Assange languishes in prison.

As Jacobin’s Branko Marcetic observed, this is far from the first time AP has given the cover of anonymity to US government officials circulating bogus claims of potentially dangerous consequence, like the time it reported an official’s evidence-free assertion which later proved false that Iran had carried out an attack on four oil tankers off the coast of the United Arab Emirates, or the time it let another one anonymously claim that “Iran may try to take advantage of America’s troop withdrawals from Iraq and Afghanistan.”

Irresponsible journalism from the AP, but this strikes me as quite damning and suggests it's more than just one reporter that's the problem. After all, this isn't even close to the first time the AP has published a false, war-baiting claim by a anon official. pic.twitter.com/id4bWr4zdz

In a sane society, power and responsibility would go hand in hand. A disaster would be blamed on the most powerful people involved in its occurrence. In our society it’s generally the exact opposite, with the rank-and-file taking all of the responsibility and none of the power.

Our rulers lie to us, propagandize us, endanger us, impoverish us, destroy journalism, start wars, kill our biosphere and make our world dark and confusing, and they suffer no consequences for it.

We cannot allow them to continue holding all of the power and none of the responsibility. This is backwards and must end.

← Media Serve the Governors, Not the Governed
WATCH: CN Live! — ‘What’s Next For Ukraine?’ →

12 comments for “The Corporate Media Deference That Endangers Us All”