You know you’re living in a profoundly sick society when the world’s most influential newspaper runs propaganda for World War III while voices pushing for truth, transparency and peace are marginalized, silenced, shunned, and imprisoned, writes Caitlin Johnston. 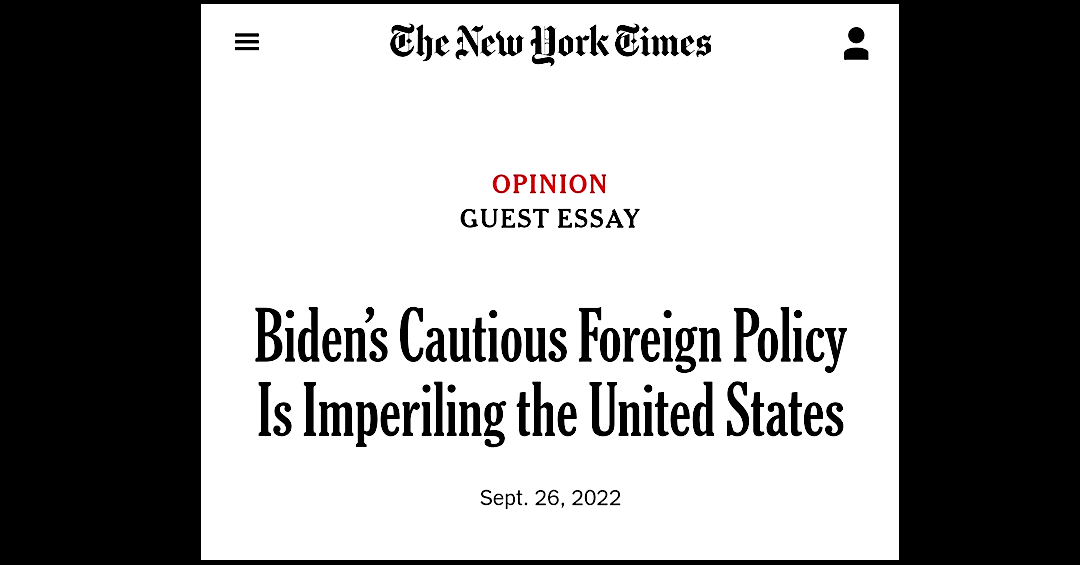 The New York Times, which consistently supports every American war, has published an op-ed by a neoconservative think tanker titled “Biden’s Cautious Foreign Policy Imperils Us“.

This would be Joseph Biden, the president of the United States who has been consistently vowing to go to war with the People’s Republic of China if it attacks Taiwan, and whose administration has been pouring billions of dollars into a world-threatening proxy war in Ukraine which it knowingly provoked and from which it has no exit strategy.

With this administration’s acceleration toward global conflict on two different fronts, one could easily argue that Biden actually has the least cautious foreign policy of any president in history.

“In the aftermath of Vladimir Putin’s recent nuclear threat and call-up of reservists, it was reassuring for the leader of the free world to be unflinching,” writes the article’s author Kori Schake, who then adds, “Rhetoric aside, the administration has signaled in numerous other ways that Putin’s threats have constrained support for Ukraine.”

As though the possibility of nuclear war should not constrain U.S. proxy warfare in that country. As though the crazy thing is not the U.S. government’s insane nuclear brinkmanship with Russia, but its reluctance to go further.

“The gap between what the administration is claiming as their foreign policy objectives, and what it is actually willing to do, is a serious problem for American security, for Russia and beyond,” writes @KoriSchake. https://t.co/SX32lJKNgM

Schake criticizes the fact that while Biden has been saying a PRC attack on Taiwan would mean a direct U.S. hot war with China, the U.S. military would need far more funding and far greater expansion to be able to win such a war, so it should definitely do those things instead of simply not rushing into World War Three.

“But worse are the real gaps in capability that call into question whether the United States could indeed defend Taiwan,” Schake writes, adding:

“The ships, troop numbers, planes and missile defenses in the Pacific are a poor match for China’s capability. The director of national intelligence, Avril Haines, has assessed that the threat to Taiwan between now and 2030 is ‘acute,’ yet the defense budget is not geared to providing improved capabilities until the mid-2030s. More broadly, the Biden administration isn’t funding an American military that can adequately carry out our defense commitments, a dangerous posture for a great power. The Democratic-led Congress added $29 billion last year and $45 billion this year to the Department of Defense budget request, a measure of just how inadequate the Biden budget is.” 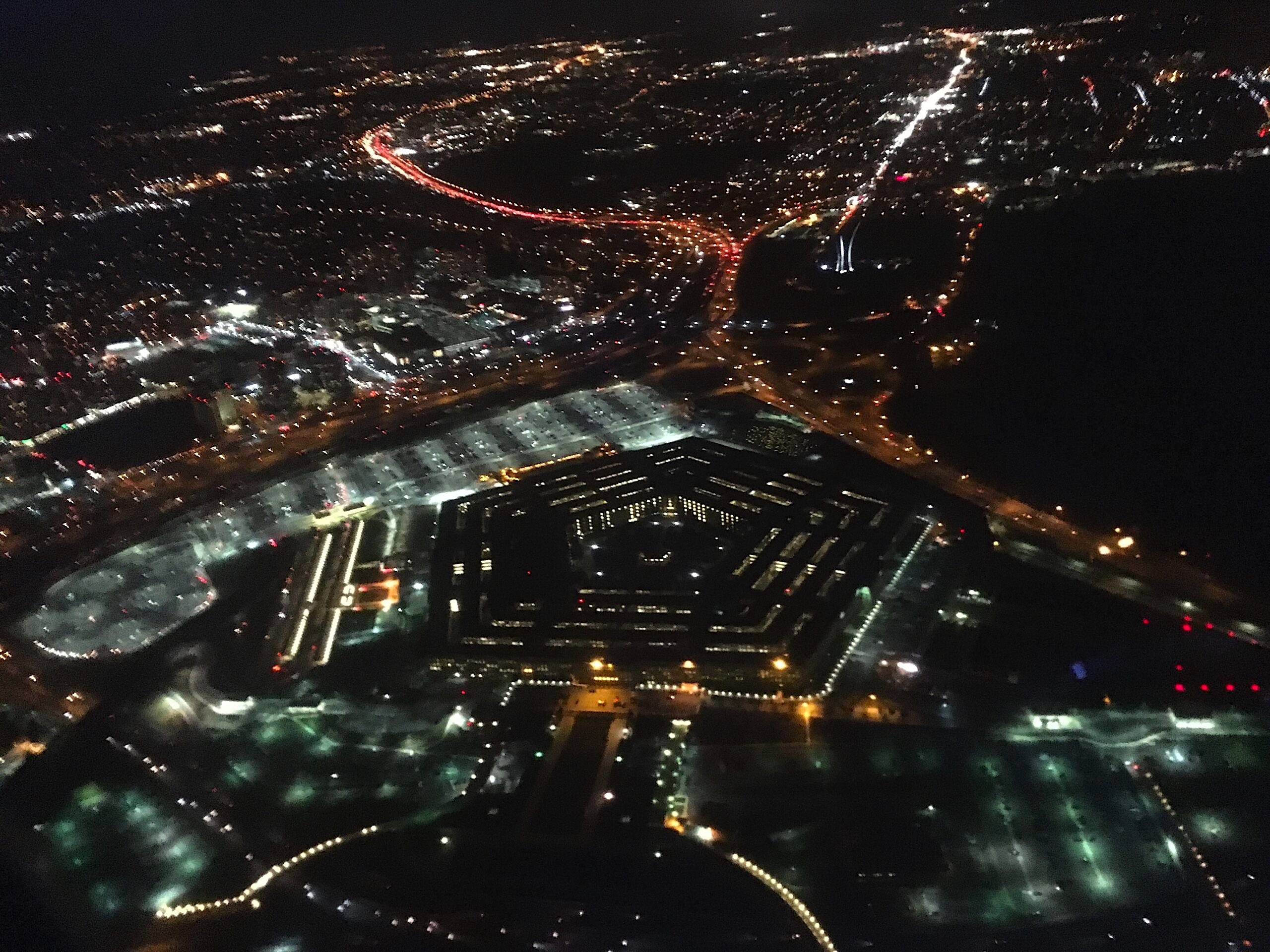 As Shchake discusses the urgent need to explode the U.S. military budget [already at $777.7 billion] in order to defend Taiwan, The New York Times neglects to inform us that Schake’s employer, the American Enterprise Institute (AEI), has been caught accepting a small fortune from Taiwan’s de facto embassy while churning out materials urging the U.S. government to go to greater lengths to arm Taiwan.

In a 2013 article titled “The Secret Foreign Donor Behind the American Enterprise Institute,” The Nation’s Eli Clifton reports that, thanks to a filing error by AEI, the Taipei Economic and Cultural Representative Office was found to have been one of the think tank’s top donors in 2009. Had that filing error not been made, we never would have learned this important information about AEI’s glaring conflict of interest in its Taiwan commentary.

AEI is one of the most prominent neoconservative think tanks in the United States, with extensive ties to Bush-era neocons like John Bolton, Paul Wolfowitz, and the Kristol and Kagan families, and has played a very active role in pushing for more war and militarism in U.S. foreign policy. Dick Cheney sits on its board of trustees, and Mike Pompeo celebrated his one year anniversary as C.I.A. director there.

Epitome of the Revolving Door 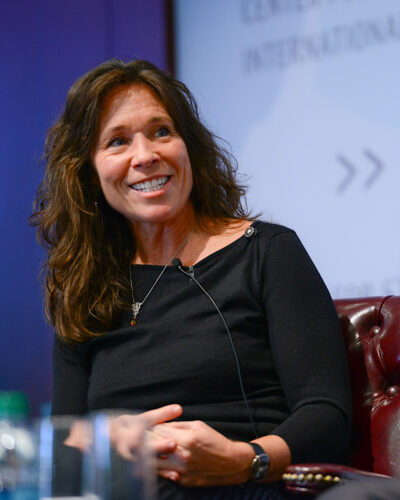 Schake herself is as intimately interwoven with the military-industrial complex as anyone can possibly be without actually being a literal Raytheon munition.

Her resume is a perfect illustration of the life of a revolving door swamp monster, from a stint at the Pentagon, to the university circuit, to the National Security Council, to the U.S. Military Academy, to the State Department, to the McCain-Palin presidential campaign, to the Hoover Institution, to the International Institute for Strategic Studies, to her current gig as director of foreign and defense policy studies at AEI.

Her entire career is the story of a woman doing everything she can to promote war while being rewarded with wealth and prestige for doing so.

And now here she is being granted space in The New York Times, a news media outlet of unrivaled influence where enemies of U.S. militarism and imperialism are consistently denied a platform, to tell us all that the Biden administration is endangering us not with its insanely reckless hawkishness, but by being too “cautious”.

One of the craziest things happening in the world today is the way westerners are being trained to freak out all the time about Russian propaganda, which barely exists in the west, even as we are hammered every day with extreme aggression by the immensely influential propaganda of the U.S.-centralized empire.

You know you are living in a profoundly sick society when the world’s most influential newspaper runs propaganda for World War Three while voices pushing for truth, transparency and peace are marginalized, silenced, shunned, and imprisoned.

← THE ANGRY ARAB: Installing a War Criminal
Unionism in US Keeps Spreading →

25 comments for “The Insanity That Grips Washington”