Is it a weird new tactic in “strategic ambiguity” to have different parts of the administration saying completely different things in totally unambiguous ways? asks Caitlin Johnstone. 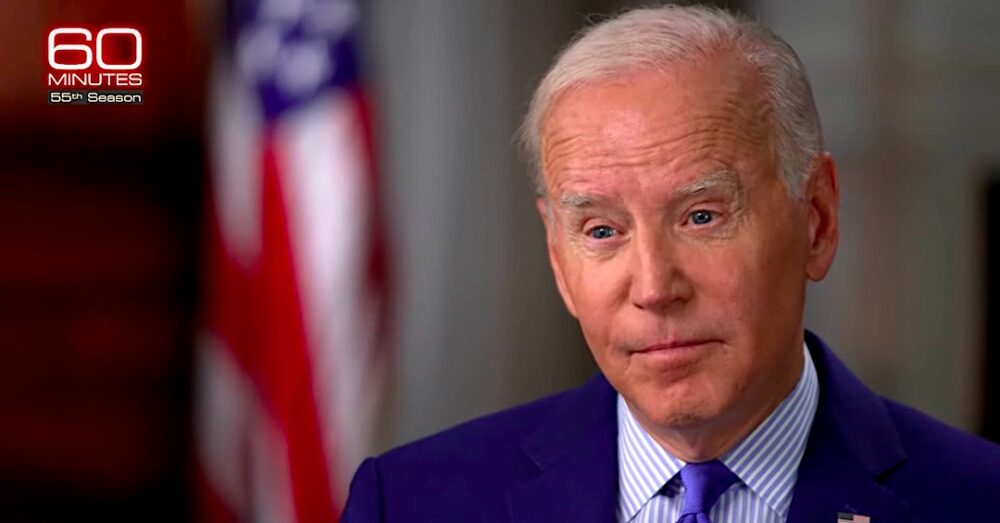 The president of the United States has once again committed the U.S. military to direct hot war with China in the event of an attack on Taiwan, a commitment that was once again walked back by his White House handlers.

In a Sunday 60 Minutes interview, Biden was asked point-blank by CBS News’ Scott Pelley if U.S. forces would defend Taiwan from an attack by the mainland.

“Yes, if in fact there was an unprecedented attack,” Biden said.

“After our interview a White House official told us U.S. policy has not changed,” Pelly narrates after the comment. “Officially, the U.S. will not say whether American forces would defend Taiwan. But the commander-in-chief had a view of his own.”

“So unlike Ukraine, to be clear, sir, U.S. forces, U.S. men and women would defend Taiwan in the event of a Chinese invasion?” Pelley asked.

This is by my count the fourth time the U.S. president has made such remarks in transgression of his government’s standing policy of “strategic ambiguity” on this issue only to have them walked back by administration staff.

This past May Biden said “yes” when asked by the press if the U.S. would defend Taiwan militarily in the event of a Chinese invasion, adding, “That’s the commitment we made.” A White House official later stated that the president’s comments did not reflect a change in U.S. policy.

At a CNN forum in October of last year Biden responded in the affirmative when asked by an audience member if the U.S. would intervene to defend Taiwan, and said “Yes, we have a commitment” when asked to clarify if he meant intervening against an attack from China. Again, the White House quickly clarified that “there is no change in our policy.”

In an interview with ABC’s George Stephanopoulos in August of last year Biden implied that the U.S. would defend Taiwan as it would a NATO ally, saying that the U.S. has “kept every commitment… same with Taiwan” when asked if China might be emboldened to attack the island by the U.S. military withdrawal from Afghanistan. Again a senior administration official told the press, “Our policy with regard to Taiwan has not changed.”

(It is worth noting at this time that Biden’s repeated assertion that the U.S. has a “commitment” to defend Taiwan militarily is objectively false; that hasn’t been the case for over 40 years.)

I’ve listed these statements in reverse chronological order, and you can see they get more vague the earlier they are. Now you’ve got the president clearly and explicitly saying that he will send U.S. troops to kill and be killed in a direct hot war with China to defend Taiwan.

The White House says official US policy hasn't changed on Taiwan, but it doesn't matter. Biden's made clear this is his policy, and whether he would follow through or not, that's the message that's been conveyed to China. This isn't dementia, it's deliberate. https://t.co/Lg5ZpTqieF

I don’t know why the U.S. president keeps verbally committing his armed forces to a third world war against a nuclear-armed nation only to have it walked back over and over again by the administration he’s supposed to be in charge of. Is this just some neurological glitch in an aging brain which promoted war and militarism throughout its entire time in office?

Is it some weird new tactic in “strategic ambiguity” to have different parts of the administration saying completely different things in totally unambiguous ways? Is Biden just a crazy warmonger? I don’t know. But what I do know is that all this chaos and confusion is happening at the worst possible time.

As Brett Wilkins explains for Common Dreams, a new bill from the U.S. Senate Foreign Relations Committee threatens to bring the world much closer to a horrific war due to the way it would upend existing U.S. policy on China with its recognition of Taiwan as a major “non-NATO ally” as part of a commitment to send billions of dollars worth of weapons to the island.

Fears of what this could unleash upon our world have caused even fairly reliable empire facilitators like Ed Markey to vote against the bill, which Chinese Foreign Ministry spokesperson Mao Ning says would “greatly shake the political foundation of China-U.S. relations and cause extremely serious consequences to China-U.S. relations and peace and stability across the Taiwan Strait.”

This is just one of the ways that tensions with China are being ramped up with astonishing speed over Taiwan, among them also the normalization of sending an increasingly high number of U.S. officials to Taipei in steadily rising contempt for Washington’s One China policy which has kept the peace along this flashpoint for decades.

This Taiwan situation is getting uglier and uglier, much faster than many expected, and the president of the world’s mightiest war machine is either too stupid, too bloodthirsty, too careless or too demented to navigate this situation with the sensitivity it deserves.

Things never should have been allowed to get this far, and the U.S. empire is showing us every indication that it intends to take things much, much further.

39 comments for “Biden Again Vows War With China Over Taiwan”