Victims of British imperialism explain why they are far from mourning the death of the U.K. monarch. 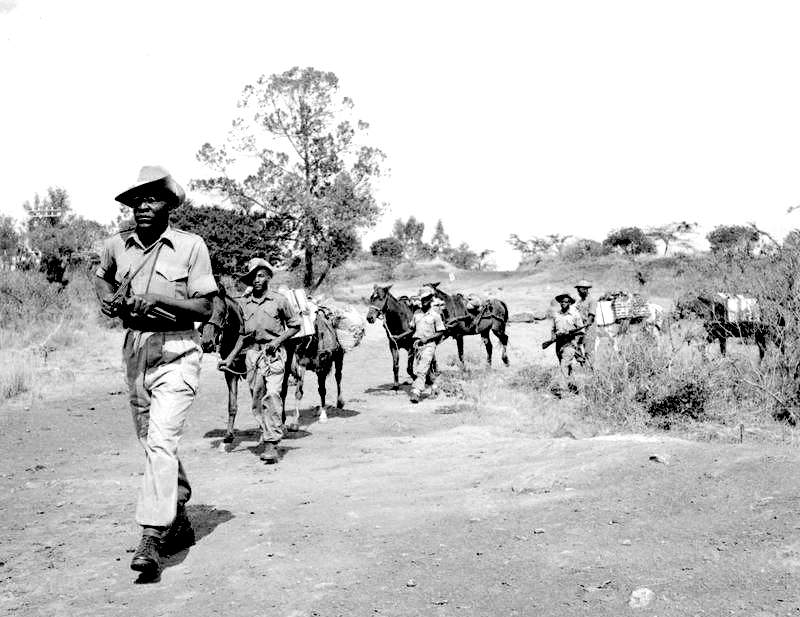 Troops of the King’s African Rifles, a British colonial regiment, carry supplies while on watch for Mau Mau fighters, between 1952 and 1956. (Imperial War Museums, Wikimedia Commons)

As millions of Britons and admirers the world over mourned Queen Elizabeth II’s death Thursday, others — especially in nations formerly colonized by the British Empire — voiced reminders of the “horrendous cruelties” perpetrated against them during the monarch’s reign.

“We do not mourn the death of Elizabeth, because to us her death is a reminder of a very tragic period in this country and Africa’s history,” declared Julius Malema, head of the left-wing Economic Freedom Fighters party in South Africa.

“Elizabeth ascended to the throne in 1952, reigning for 70 years as a head of an institution built up, sustained, and living off a brutal legacy of dehumanization of millions of people across the world,” he continued.

“During her 70-year reign as queen, she never once acknowledged the atrocities that her family inflicted on native people that Britain invaded across the world,” Malema noted. “She willingly benefited from the wealth that was attained from the exploitation and murder of millions of people across the world.”

Black and brown people around the world who were subject to horrendous cruelties and economic deprivation under British colonialism are allowed to have feelings about Queen Elizabeth.

After all, they were her "subjects" too.

Larry Madowo, a CNN International correspondent from Kenya, said during a Thursday broadcast that “the fairytale is that Queen Elizabeth went up the treetops here in Kenya a princess and came down a queen because it’s when she was here in Kenya that she learned that her dad had died and she was to be the queen.”

“But that also was the start of the eight years after that, that the … British colonial government cracked down brutally on the Mau Mau rebellion against the colonial administration,” he continued. “They herded more than a million people into concentration camps, where they were tortured and dehumanized.”

Larry Madowo is telling the African story as it is on a global platform. Queen Elizabeth was not universally loved in Africa.pic.twitter.com/pD4dfRS2FW

In addition to rampant torture — including the systemic castration of suspected rebels and sympathizers, often with pliers — British forces and their local allies massacred unarmed civilians, disappeared their children, sadistically raped women and clubbed prisoners to death.

“And so,” added Madowo, “across the African continent, there have been people who are saying, ‘I will not mourn for Queen Elizabeth, because my ancestors suffered great atrocities under her people that she never fully acknowledged that.”

Indeed, instead of apologizing for its crimes and compensating its victims, the British government launched Operation Legacy, a massive effort to erase evidence of colonial crimes during the period of rapid decolonization in the 1950s-’70s.

Reminder that Queen Elizabeth is not a remnant of colonial times. She was an active participant in colonialism. She actively tried to stop independence movements & she tried to keep newly independent colonies from leaving the commonwealth. The evil she did was enough https://t.co/SDGi0boCzx

“If the queen had apologized for slavery, colonialism, and neocolonialism and urged the Crown to offer reparations for the millions of lives taken in her/their names, then perhaps I would do the human thing and feel bad,” tweeted Cornell University professor Mukoma wa Ngugi. “As a Kenyan, I feel nothing. This theater is absurd.”

Aldani Marki, an activist with the Organization of Solidarity with the Yemeni Struggle, asserted that “Queen Elizabeth is a colonizer and has blood on her hands.”

“In 1963 the Yemeni people rebelled against British colonialism. In turn the Queen ordered her troops to violently suppress any and all dissent as fiercely as possible,” he tweeted. “The main punitive measure of Queen Elizabeth’s Aden colony was forced deportations of native Yemenis into Yemen’s desert heartland.”

In 1963 the Yemeni people rebelled against British colonialism. In turn the Queen ordered her troops to violently suppress any and all dissent as fiercely as possible. pic.twitter.com/zAmhAe71Y5

“This is Queen Elizabeth’s legacy,” Marki continued. “A legacy of colonial violence and plunder. A legacy of racial segregation and institutionalized racism.”

“The queen’s England is today waging another war against Yemen together with the U.S., Saudi Arabia and the U.A.E.,” he added.

Melissa Murray, a Jamaican-American professor at New York University School of Law, said that the queen’s death “will accelerate debates about colonialism, reparations, and the future of the Commonwealth” as “the residue of colonialism shadows day-to-day life in Jamaica and other parts of the Caribbean.”

Jamaica, Scotland, and Australia are just some of the countries that could decide to sever ties with the monarchy. https://t.co/NcUjfivutG

Numerous observers noted how the British Empire plundered around $45 trillion from India over two centuries of colonialism that resulted in millions of deaths, and how the Kohinoor — one of the largest cut diamonds in the world, with an estimated value of $200 million — was stolen from India to be set in the queen mother’s crown.

“Why are Indians mourning the death of Queen Elizabeth II?” asked Indian economist Manisha Kadyan on Twitter. “Her legacy is colonialism, slavery, racism, loot, and plundering. Despite having chances, she never apologized for [the] bloody history of her family. She reduced everything to a ‘difficult past episode’ on her visit to India. Evil.”

If anyone expects me to express anything but disdain for the monarch who supervised a government that sponsored the genocide that massacred and displaced half my family and the consequences of which those alive today are still trying to overcome, you can keep wishing upon a star.

An Indian historian tweeted, “there are only 22 countries that Britain never invaded throughout history.”

“British ships transported a total of three million Africans to the New World as slaves,” he wrote. “An empire that brought misery and famine to Asia and Africa. No tears for the queen. No tears for the British monarchy.”

Negative reaction to the queen’s passing was not limited to the Global South. Despite the historic reconciliation between Ireland and Britain this century, there were celebrations in Dublin — as a crowd singing “Lizzie’s in a Box” at a Celtic FC football match attests — and among the Irish diaspora.

Welsh leftists got in on the action too. The Welsh Underground Network tweeted a litany of reasons why “we will not mourn.”

“We will not mourn for royals who oversaw the protection of known child molesters in the family,” the group said.

“We will not mourn for royals who oversaw the active destruction of the Welsh language, and the Welsh culture,” the separatists added.

Summing up the sentiments of many denizens of the Global South and decolonization defenders worldwide, Assal Rad, research director at the National Iranian American Council, tweeted, “If you have more sympathy for colonizers and oppressors than the people they oppress, you may need to evaluate your priorities.”

← What if the 2024 ‘Whispers’ Are Right?
DIANA JOHNSTONE: The Specter of Germany Is Rising →

31 comments for “Cruelties of the Queen’s Reign”