The crisis of capitalism is now upon us. There are no palliative measures that will make the situation bearable.

I have never considered myself a Marxist. I came to adult at the end of the one, 40-year-long period in the history of Western civilisation when there was a reduction in the chasm between the rich and ordinary people.

In consequence I believed that a tolerable society might be achieved by simple measures to ameliorate capitalism. I grew up with public ownership of utilities, natural monopolies and strategic industries, with free healthcare and medicines, free university tuition with good maintenance grants, schools under control of elected local councils, controlled fair rents including the private sector and significant public housing. We thought it would last forever.

In 1973 I joined the Liberal Party. Much of the 1974 Liberal Party manifesto I could still believe in now. The above things like public ownership of utilities and major industries and free education were not in the manifesto because they did not have to be — they already existed and were the basic structure.

The manifesto added things like a basic guaranteed income for everybody in society, compulsory worker shareholdings in those industries not nationalised, workers’ councils and a rent freeze in both public and private sectors.

I am not claiming it as a great socialist document — there were signs of right wing thought creeping in like a shift to indirect taxation. But the truth is that the Liberal Party manifesto of 1974 was at least as left as former Labour Leader Jeremy Corbyn’s manifesto. Some of its ideas were far ahead of their time — like the idea that continuous economic growth and increasing consumption as not sustainable or desirable.

Believing in essentially the same things now, I find myself on the far left — without ever having moved!

Here are a couple of extracts from the 1974 Liberal manifesto which may surprise you. This kind of language you will not hear from Keir Starmer’s Labour Party — indeed it would probably get you thrown out: 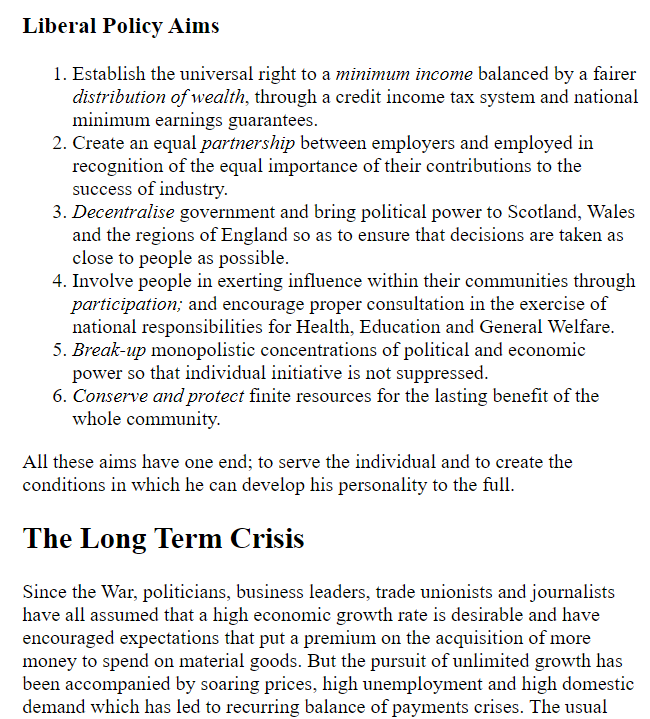 That Liberal Party is of course gone, along with the radical, anti-war, anti-unionist traditions of British liberalism. They were diluted by the merger with the Social Democratic Party and finally killed off by [former Deputy Prime Minister] Nick Clegg, [now president for global affaires at Meta Platforms], and the “Orange Bookers” who turned the hybrid party fully neo-liberal, a doctrine with almost no resemblance to the liberalism it claims to reassert.

Those hardy souls who follow and support this blog are witnessing the last knockings of the legacy of political thought that was bestowed by John Stuart Mill, William Hazlitt, John Ruskin, John A. Hobson, Charles Kingsley, Bertrand Russell, William Beveridge and many others, seasoned by Piotr Kropotkin and Pierre-Joseph Proudhon.

I don’t imagine any further generation attempting to be active in politics will develop their worldview with those thinkers as their primary motivators.

But the point of this self-absorbed drivel is that I am not a Marxist and do not come from an organised labour or socialist background or mindset. 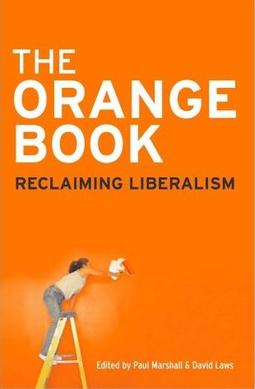 The key thought towards which I am plodding through this morass of explanation is this: I grew up in the one era when capitalism was sufficiently moderated by palliative measures that it seemed a reasonable way to conduct society.

That ended around 1980 when the doctrine of neo-liberalism took hold of the Western world. In the U.K., that doctrine now firmly controls the Conservative, Lib Dem, Labour and Scottish National parties and is promoted relentlessly by both state and corporate media.

The result of this neo-liberal domination has been a massive and accelerating expansion in the gap between the ultra wealthy and the rest of society, to the extent that ordinary, once middle-class people struggle to pay the bills required simply to live. The situation has become unsustainable.

In short, it turns out Marx was right. The crisis of capitalism is now upon us. Neo-liberalism (another word for designing state systems deliberately to lead to incredible concentrations of wealth amid general poverty) is coming to the end of its course.

There are no palliative measures that will make the situation bearable. A radical change in the ownership of assets is the only thing that will address the situation — starting with public ownership of all energy companies, from hydrocarbon extractors like Shell and BP, through gas, electricity and fuel generators and manufacturers, distributors and retailers.

That is only one sector and only the start. But it is a good start. I frequently pass the Grangemouth refinery and am amazed that all that land, massive equipment, all those chemicals and processes, go primarily to the benefit of Britain’s richest man, Jim Ratcliffe, who is considering buying Manchester United as his latest toy, while his workers protest at another real terms pay cut. This obscenity cannot continue forever. 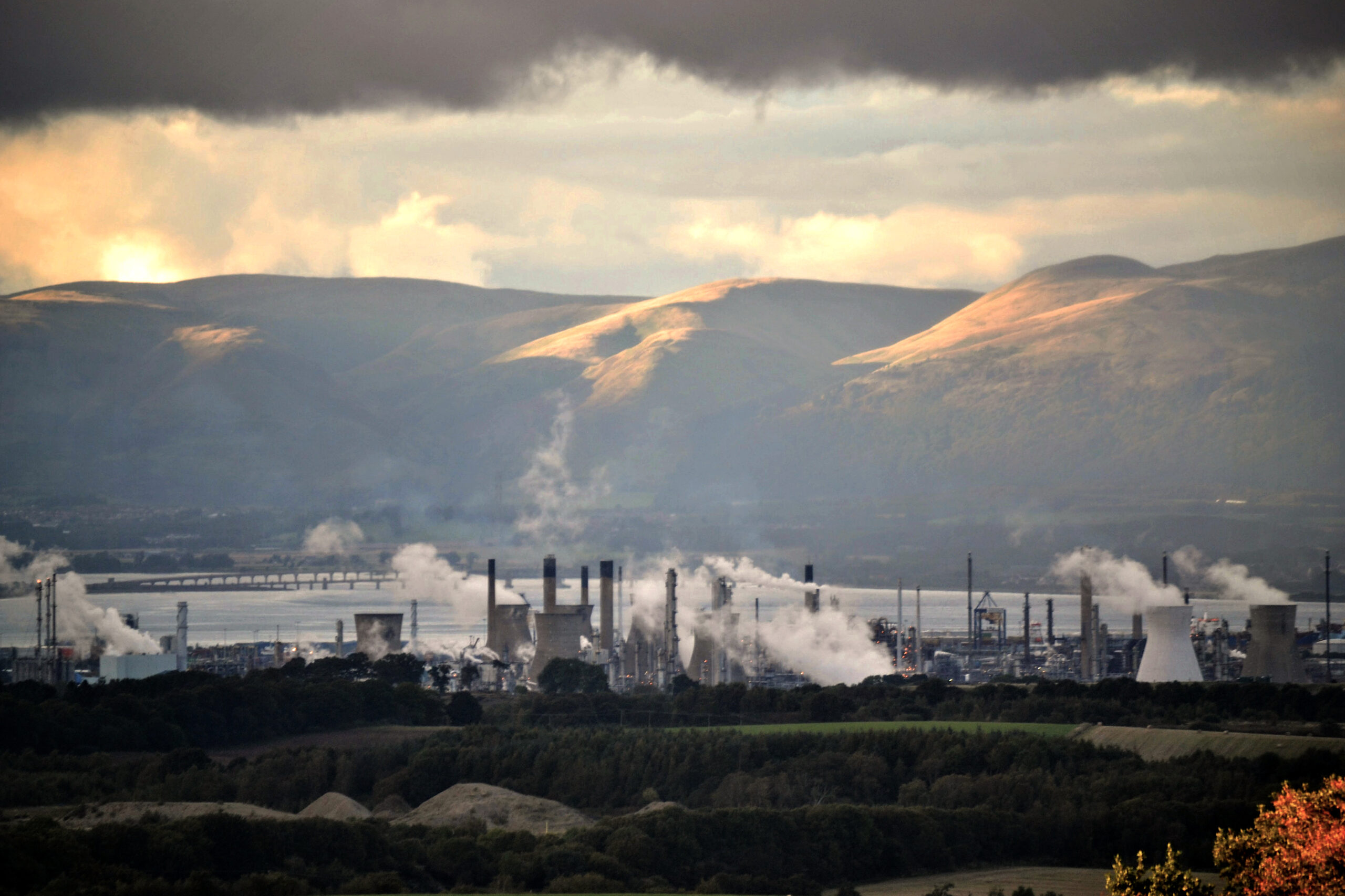 Wars are not incidental to neo-liberalism. They are an essential part of the programme, because untrammeled consumerism requires massive acquisition of natural resources. Constant war has the helpful side benefit for the global elite of massive profit to the military industrial complex.

The cost in human misery and death is kept at a discreet distance from the Western world save for refugee flows, which meet with a response increasingly founded in the denial of humanity.

The promotion of continual war has led to the acceleration of crisis. Much of the current cost-of-living explosion can be directly attributed to the provoked, prolonged and pointless war in Ukraine, while neo-liberal doctrine forbids control of the horrendous associated profiteering of the energy companies.

There is going to be public anger come spring of a strength and reach not seen in my lifetime. The ultra wealthy and their political servants know this, and therefore strong action is being taken to forestall public protest.

The new Policing Act is one of a raft of measures being brought in to clamp down on avenues for free expression of public discontent. Demonstrations can simply be banned if they are “noisy” or an “inconvenience.” The 2 million person march against the Iraq War in London, for example, could have been banned on both grounds.

I met and talked last weekend at the Beautiful Days festival with the admirable Steve Bray; we don’t agree on everything but his public concern is genuine. He is getting used to being removed by police from Parliament Square after being specifically targeted in legislation. I reminded him — and I remind you — that the Blair government had also banned protest near the Westminster parliament.

Intolerance of dissent is a feature of modern neo-liberalism, as people in Canada and New Zealad are also witnessing — or as Julian Assange might tell you.

But in addition to legislative and state attacks on protest, the neo-liberal state is also ramping up its more subtle elements of control. The security services are continually being expanded. The media is not only increasingly concentrated, it is increasingly under direct security-service influence — the Integrity Initiative, the Paul Mason revelations and the barely disguised spookery of Luke Harding and Mark Urban all being small elements of a massive web designed to control the popular imagination.

← $3 Billion More for War, But Nothing for Free Covid Tests
Confronting Colombia’s Inequality →