What we have here, writes Vijay Prashad, is a government adhering to the religion of privatization and eager to cannibalize Visakha Steel. 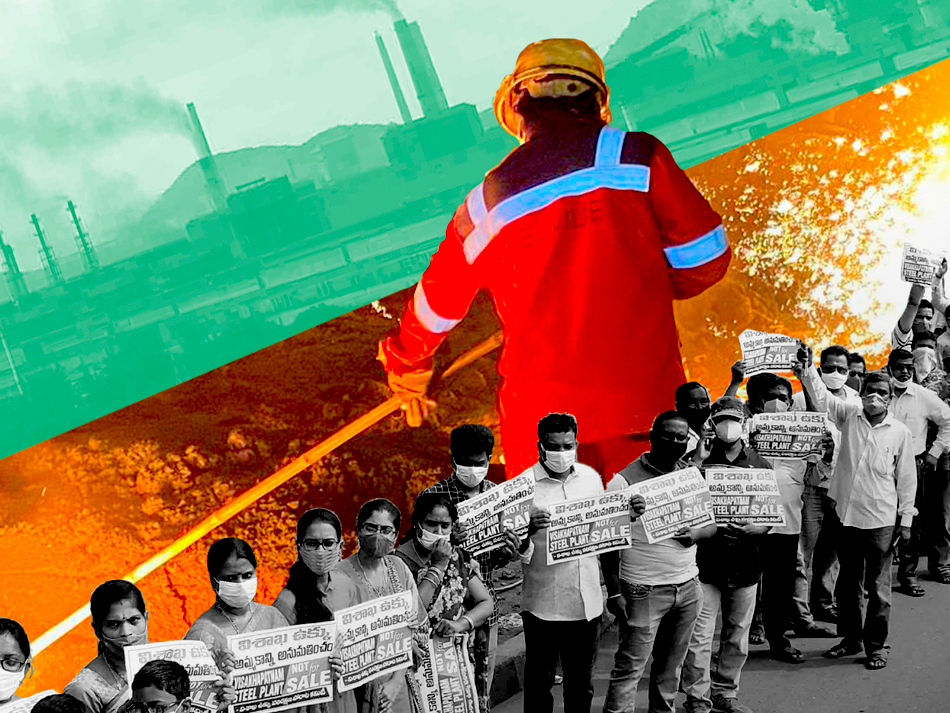 The long and distant epoch of pre-history, dated to the time before the start of the Common Era, is conventionally divided into three periods: the Stone Age, the Bronze Age and the Iron Age. Subsequently, in the era of written history, we generally have not relied upon specific metals or minerals to define our periods.

Too many metals and minerals, harnessed by new production techniques and new labour patterns, have contributed to our immense capacity to generate large surpluses. There is the Age of Industry but not, for instance, the Age of Steel, the core metal of our period.

“We grow out of iron,” wrote the Russian poet Aleksei Gastev in 1914. He watches the furnaces and the forges, the hammers and the machinery, and then:

Gazing upon them, I draw myself up straight.
Pouring into my veins is a new, iron blood,
And I begin to grow.
I myself am growing steel shoulders and infinitely strong hands.
I am merging with the iron edifice.
With my shoulders, I am pushing the rafters and the beams up to the roof.
My feet are grounded, but my head is higher than the building.
And while I am still choking from my inhuman efforts,
I am already crying out:
a word, comrades, a word!
The iron echo has heeded my words, the whole building
trembles with impatience.
I continue to rise upwards; I am on level with the pipes.
And there is no story here, there is no speech.
There is only the cry:
we will triumph! 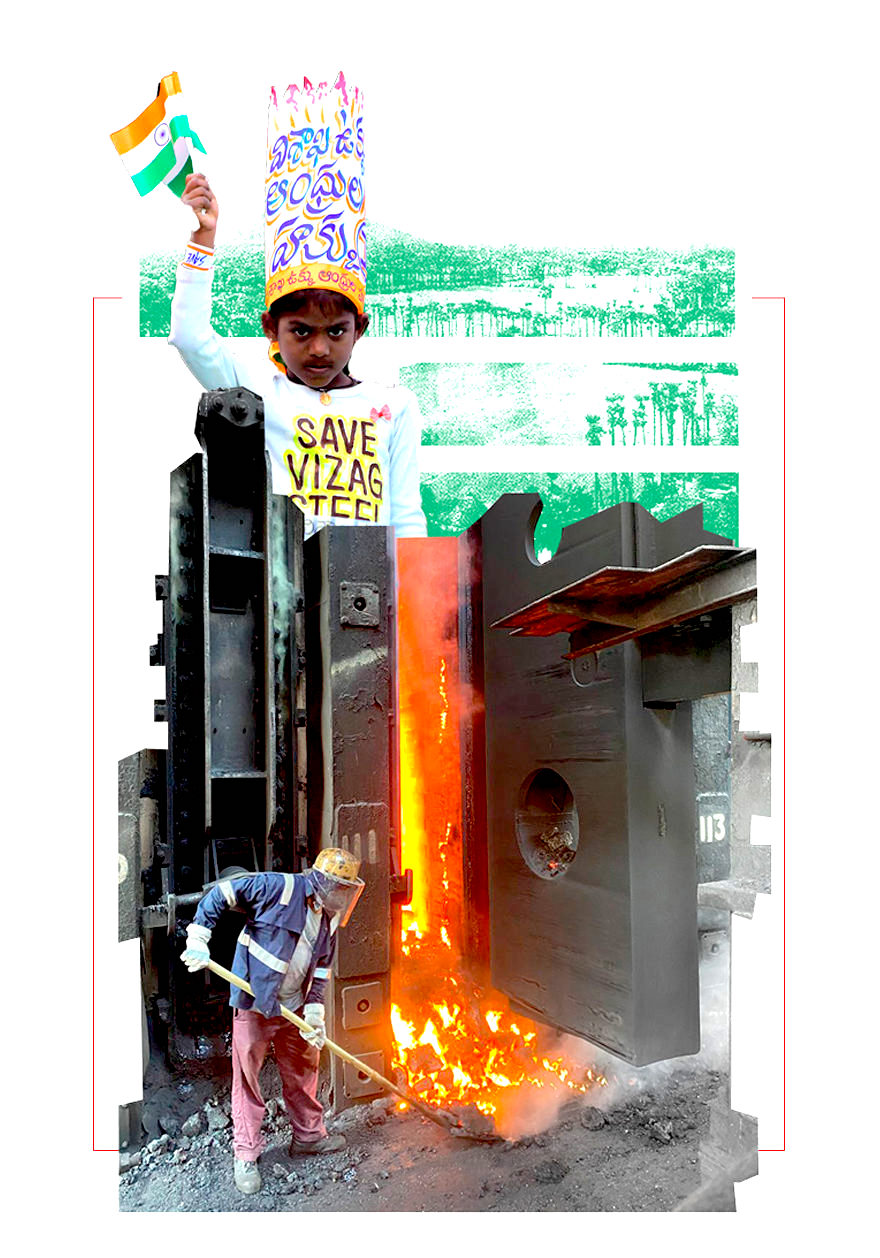 The virus of deindustrialisation that beset North America and Europe in the 1970s created a field of scholarly literature on post-work and post-industrial society. These writings led to the curious assumption that the digital economy would be the primary motor of capital accumulation; there was marginal interest in the fact that even the digital economy needed infrastructure, including satellites and undersea cables as well as plants to generate electricity and gadgets to link to the digital highways.

This digital economy is grounded in a range of metals and minerals — from copper to lithium. Old steel, tempered in large factories, however, continues to be the foundation of our society. This steel — a thousand times stronger than iron — is as ubiquitous in our world as plastic. 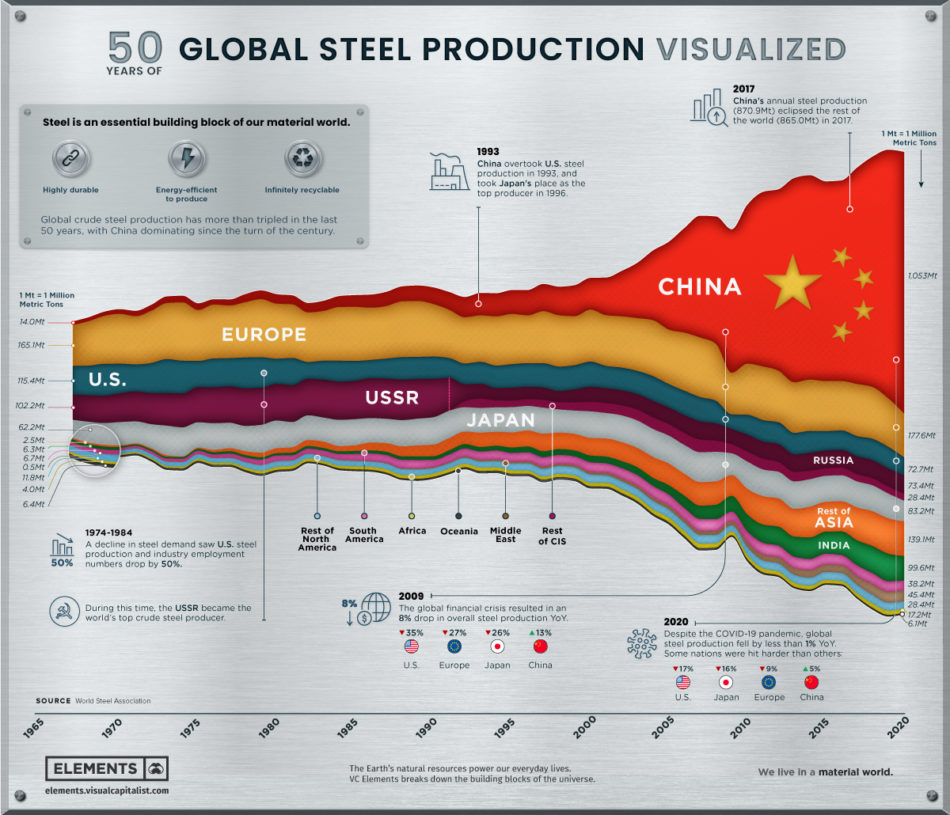 Many of these factories in India are in the public sector, built with state funds and administered by state and para-statal entities. Amongst these factories is Rashtriya Ispat Nigam Limited (RINL), a steel complex in Visakhapatanam in India’s south-eastern state of Andhra Pradesh.

The factory, affectionately called Visakha Steel, was born out of a mass struggle led by the people of Andhra Pradesh that began in 1966 and lasted till the furnaces were lit in 1992. The factory complex was established at a time when the Indian state — under pressure from the Indian ruling class and the International Monetary Fund — began to liberalise the economy, including through the privatisation of state assets.

The factory was born into a liberalised world with the government eager to scuttle its possibilities to sell it off to private capital in a wave of privatisation that could better be called piratisation. 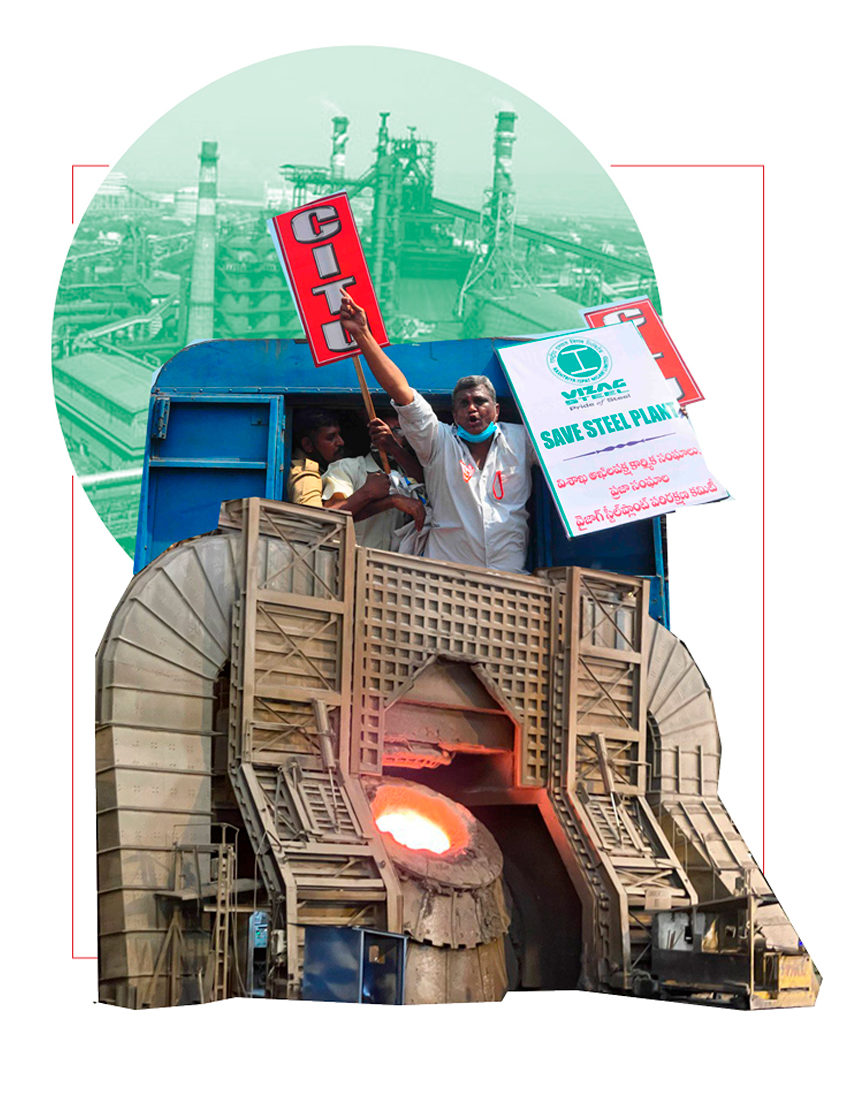 The inspirational story of Visakha Steel is the subject of our dossier no. 55 (August 2022), “The People’s Steel Plant and the Fight Against Privatisation in Visakhapatanam.” The dossier describes the struggles of the people of Andhra Pradesh to force the government to build a factory, a “temple of modern India,” as India’s first Prime Minister Jawaharlal Nehru called them. Visakha Ukku, Andhrula Hakku, the youth and students chanted: “Visakha Steel is the Andhra people’s right.”

In 1966, the struggle was met by terrible state violence that resulted in the death of 32 people and the arrests and torture of many, many more. Unable to crush the movement, which was shaped by the communists, and understanding the imperative of more steel for an India that desperately sought to transcend the problems of hunger and illiteracy, the government agreed to build the factory and spent Rs. 17 billion until the mid-1980s to start building the plant.

Since Visakha Steel emerged at a time when the religion of privatisation had become dominant, the Indian government sought on several occasions to scuttle its ability to survive in the public sector by preventing the steel factory from acquiring captive mines, building a captive port nearby in Gangavaram, building sufficient capacity in its steel melt shop (to process the crude iron into steel), and receiving adequate and timely government funding.

The government instead tried to let a private company set up a steel melt shop that would use molten iron from Visakha Steel’s blast furnaces to produce processed steel which could be sold in the market at high profit margins — a move that the workers defeated. At no point did the government demonstrate its commitment to either the production of steel or to improving the living conditions of the steel factory workers and their families. 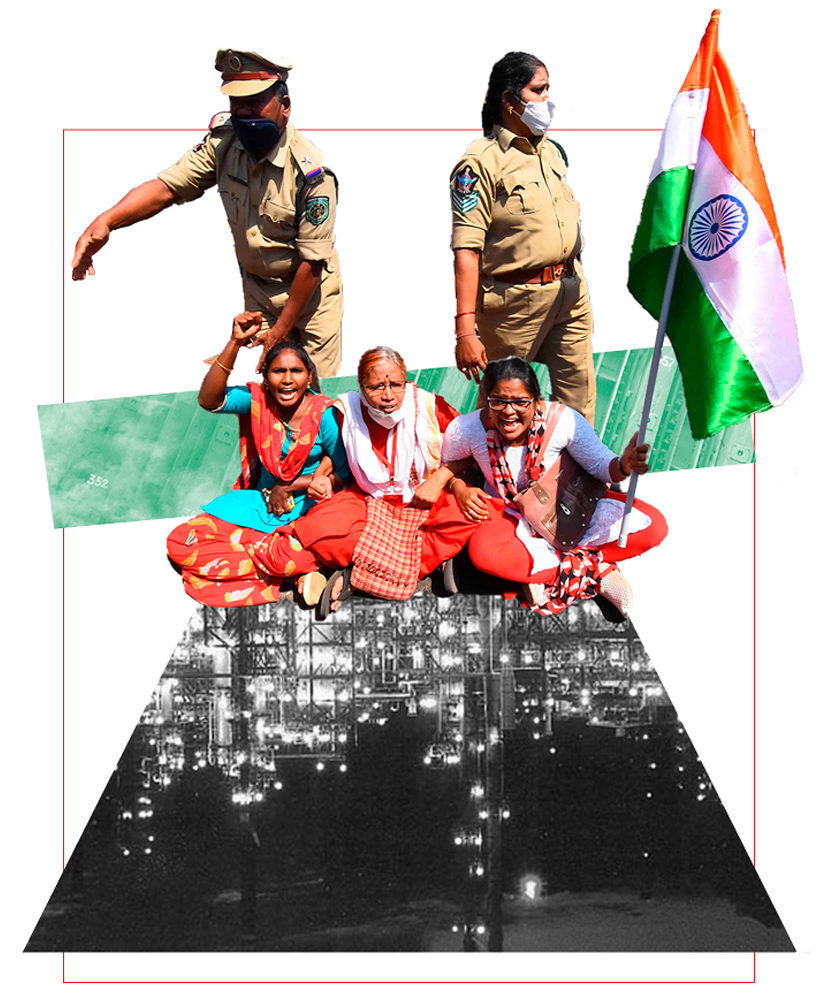 The workers, on the other hand, had their own ideas. Led by the Centre for Indian Trade Unions (CITU) and other unions, the workers fought to restructure government loans and convert them into state equity, to allot a captive iron ore mine for the plant, and to increase the capacity of the steel melt shop.

As our dossier notes, the steel workers have been

“strongly committed to the company’s growth as a technically efficient and financially viable plant, whether by fighting to expand the plant, gain captive mines, or resolve technical glitches and issues. Whenever a technical problem has arisen in the plant, be it with coke ovens, power plants, steel melt shop, or otherwise, the workers and trade unions have tirelessly conducted thorough study and analysis to come up with and implement adequate solutions.”

What we have here is a government eager to cannibalise Visakha Steel and workers committed to production at “the people’s steel plant.”

Instead of setting up the Gangavaram Port in the public sector as initially envisaged, the government has given the port to the Adani Group — whose owner has intimate ties with Prime Minister Narendra Modi — which charges Visakha Steel substantial fees.

It is important to note that this port was built on land that originally belonged to the steel plant. Further, while Visakha Steel pays property taxes in the city, Adani’s private port is exempt from paying taxes.

At the same time, Modi’s government tried to deliver Visakha Steel’s land to the South Korean steel giant POSCO to set up its own rolling mills to produce special auto grade steel products using the steel from the Visakha plant. In a typical example of privatisation by stealth, the dossier explains,

“Visakha Steel was being asked to handle the most complex, dangerous, and messy kinds of work – procuring ore, running coke ovens, oxygen plants, and various furnaces – while POSCO would take over the most lucrative part of the value chain.” 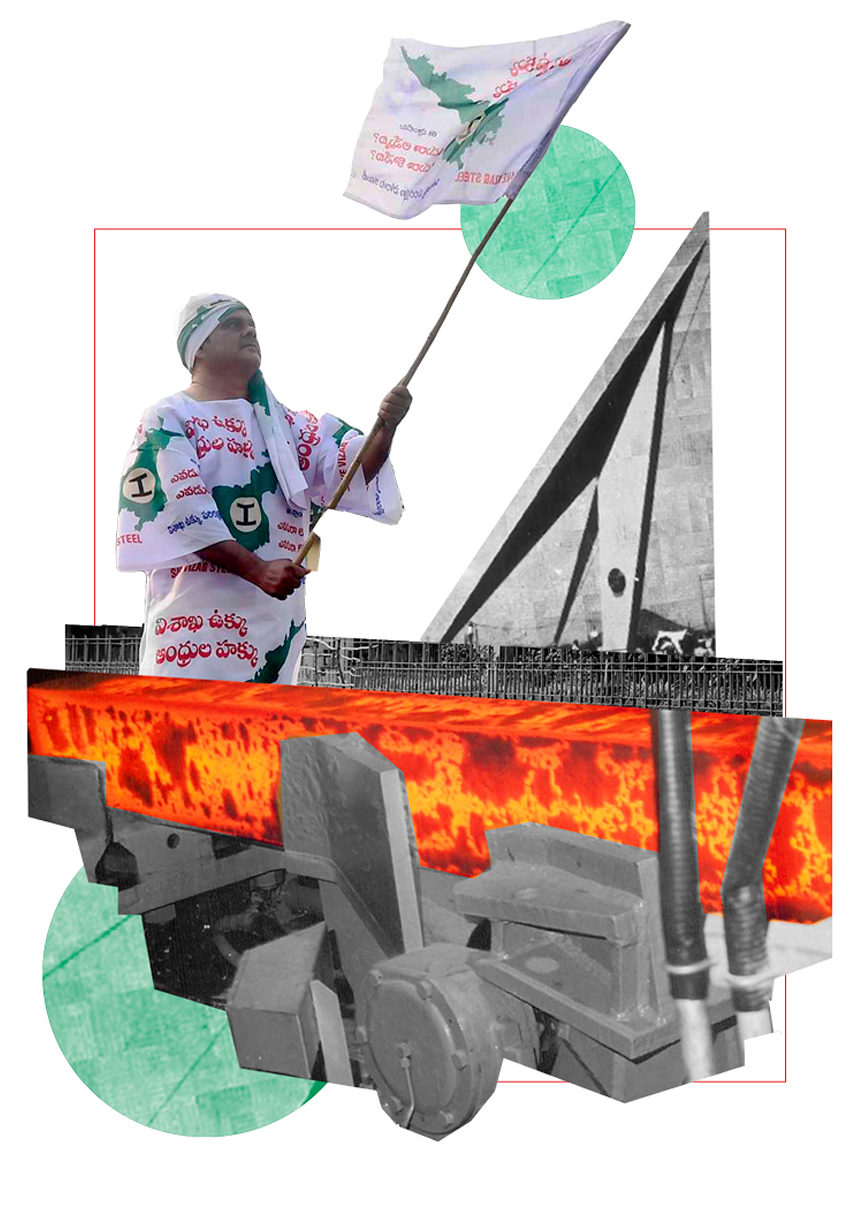 Nothing doing, said the workers. Drawing from the historic struggle that built the plant in the first place, the workers began a movement to save Visakha Steel. The tidal wave of this movement — which has received key support from the farmers’ struggle,  unionised rural childcare workers and the people of Andhra Pradesh — stayed the hand of the government. While the government dithered during the pandemic, it was the steel workers who ran their oxygen plants continuously to produce medical grade oxygen for the hospitals.

Not much is written about struggles such as this one, led by the brave steel workers who are mostly forgotten or, if remembered, then maligned. They stand beside the furnaces, rolling the steel out, tempering it, wanting to build better canals for the farmers, to build beams for schools and hospitals, and to build the infrastructure so that their communities can transcend the dilemmas of humanity.

Our dossier is built through our interactions with the steel workers and their union, who told us how they see their past and how they understand their struggle. They also shared with us their photographs (as well as photographs taken by Kunchem Rajesh of the Andhra Pradesh-based newspaper Prajasakti), out of which our art department made the collages which illustrate the dossier (some of which are shared in this newsletter).

At their demonstrations, the workers sing, chant, and recite poems that tell them to get ready for battle “before the earth disappears under our feet, before the steel slips away from our hands.” If you try to privatise the factory, they sing, “Visakha city will turn into a steel furnace, North Andhra into a battlefield… We will defend our steel with our lives.”

2 comments for “Indian Workers Defend Steel With Their Lives”