Zuckerberg’s deployment of algorithms to please the F.B.I. is a glaring example of how billionaires and government work together to control information in an oligarchy. 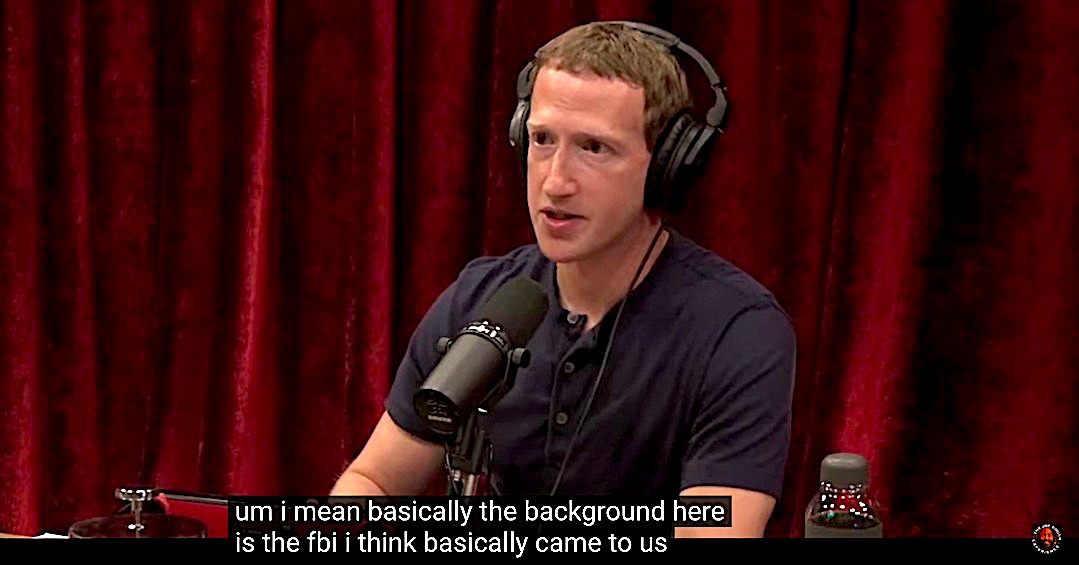 Facebook restricted visibility of The New York Post’s Hunter Biden laptop story in the lead-up to the 2020 election after receiving counsel from the F.B.I., according to Facebook/Meta CEO Mark Zuckerberg.

“So we took a different path than Twitter,” Zuckerberg said during a Thursday appearance on The Joe Rogan Experience.

“Basically the background here is the F.B.I., I think basically came to us — some folks on our team and was like, ‘Hey, um, just so you know, like, you should be on high alert. There was the — we thought that there was a lot of Russian propaganda in the 2016 election. We have it on notice that basically there’s about to be some kind of dump of — that’s similar to that. So just be vigilant.’”

Zuckerberg said a decision was made to restrict that information on Facebook’s multibillion-user platform. He said that unlike Twitter, which banned the sharing of the article entirely, Facebook opted for the somewhat subtler option of censorship by algorithm.

“The distribution on Facebook was decreased,” he said, adding when pressed by Rogan that the decreased visibility of the article happened to a “meaningful” extent.

As we’ve discussed previously, censorship by algorithm is becoming the preferred censorship method on large Silicon Valley platforms because it can be done to far more people with far less objection than outright de-platforming and bans.

BREAKING: Mark Zuckerberg tells Joe Rogan that Facebook algorithmically censored the Hunter Biden laptop story for 7 days based on a general request from the FBI to restrict election misinformation. pic.twitter.com/llTA7IqGa1

In addition to being censored across social media platforms, the Hunter Biden laptop story was first ignored and dismissed by the mainstream news media, then spun as a Russian disinformation operation. Those media outlets eventually came around to admitting that the leaked emails were probably authentic, and Hunter Biden tacitly authenticated them himself when he acknowledged that the information “could” have come from his laptop.

Nothing we know so far that came from that laptop was as scandalous as the unified front presented by the news media and Silicon Valley in reducing the political impact of an October surprise before a presidential election.

And now we know that the reason the world’s largest social media platform censored that particular story was because they were cautioned by the F.B.I. against allowing such information to circulate. How many of those other institutions suppressed that news story because they were told to by the F.B.I. or other government agencies? How often are U.S. government agencies involving themselves in the act of censorship? What other information is being suppressed in this or similar ways? What other information will be suppressed in the future?

Because of the veils of government and corporate secrecy which obscure our view of the behaviors of power, we don’t get to have answers to these questions. All we get to have is what oligarchs like Zuckerberg choose to tell us, in whatever way and to whatever extent they choose to tell us about them.

But even what we’ve been told is pretty ugly. A government agency and a social media platform of unprecedented influence teaming up together to silence impactful political speech is censorship by any sane definition. Mainstream liberals can come up with all kinds of arguments for why the continually expanding justifications for online censorship are fine and normal and not really censorship, but are they able to maintain those justifications when government agencies are actively involved? Is it really better when political speech is being censored by a collaboration of government operatives and billionaires than censored directly by the government alone?

Twitter is hiring a TON of FBI agents. Searching employment websites, it is clear Twitter has been extensively recruiting from the FBI, employing a dozen former feds.

My new @mintpressnews investigation explores why and what this means for us.https://t.co/15hZwFz8X8

Alan MacLeod has been putting out a number of reports with Mintpress News documenting the way many veterans from the F.B.I., C.I.A., NSA and other government agencies have been recruited to work for tech companies like Google/YouTube, Facebook/Meta and Twitter. The intimacy with which these government and corporate entities are working together is growing and they’re making less and less effort to conceal it.

You know you are living in an oligarchy when Mark Zuckerberg has more political influence over your country than any elected official. Democracy is an illusion. Those who live under the U.S. empire are a propagandized and politically impotent population who only think they are free because they’ve been given the illusion of freedom, and less and less effort is being made to sustain that illusion.

We are ruled by unelected sociopaths who have no wisdom, no compassion, and no intention of ever relinquishing their rule. This will continue unless and until enough of us wake up to what’s going on to stop them.

← Indian Workers Defend Steel With Their Lives
Gough, Rupert and the London Job →