The people of Potosí, Bolivia, like those of Tierra Amarilla, Chile, want to imagine a different kind of extraction, write Vijay Prashad and Taroa Zuniga Silva.

In late July, a large sinkhole appeared near the town of Tierra Amarilla in Chile’s Copiapó province in the Atacama salt flat. The crater, which has a diameter of more than 100 feet, emerged in one of Chile’s most lucrative regions for copper and lithium extraction.

The nearby Candelaria mining complex — 80 percent of the property is owned by Canada’s Lundin Mining Corporation and 20 percent by Japan’s Sumitomo Metal Mining Co Ltd. and Sumitomo Corporation — had to halt its operations in the area.

A mysterious sinkhole has opened up in Chile and continues to grow in size.

On Aug. 1, Chile’s National Geology and Mining Service (Sernageomin) tweeted that it had assembled a team to investigate the sinkhole that appeared less than 2,000 feet away from human habitation.

The mayor of Tierra Amarilla, Cristóbal Zúñiga, questioned why the earth had given way near the Alcaparrosa mine, and whether the appearance of the hole had something to do with the mining operations.

“Today it happened on an agricultural property,” the mayor told Ciudadano ADN radio, “but our greatest fear is that this could happen in a populated place on a street, in a school, and protecting the integrity of our inhabitants is our greatest concern at the moment.”

Government officials traveled to Tierra Amarilla to investigate the sinkhole. On Aug. 12, Marcela Hernando, the minister of mining, joined Cristóbal Zúñiga and others to tour the Alcaparrosa mine.

Before the visit, Zúñiga called for the authorities to apply “maximum sanctions” to punish those responsible for the sinkhole, which seems to have been caused by underground mining activities carried out by the Candelaria mining complex. The government agency responsible for the investigation — Sernageomin — has suspended all mining activity in the area and is continuing with its forensic assessment to ascertain the reasons behind the earth collapsing near the mining complex. 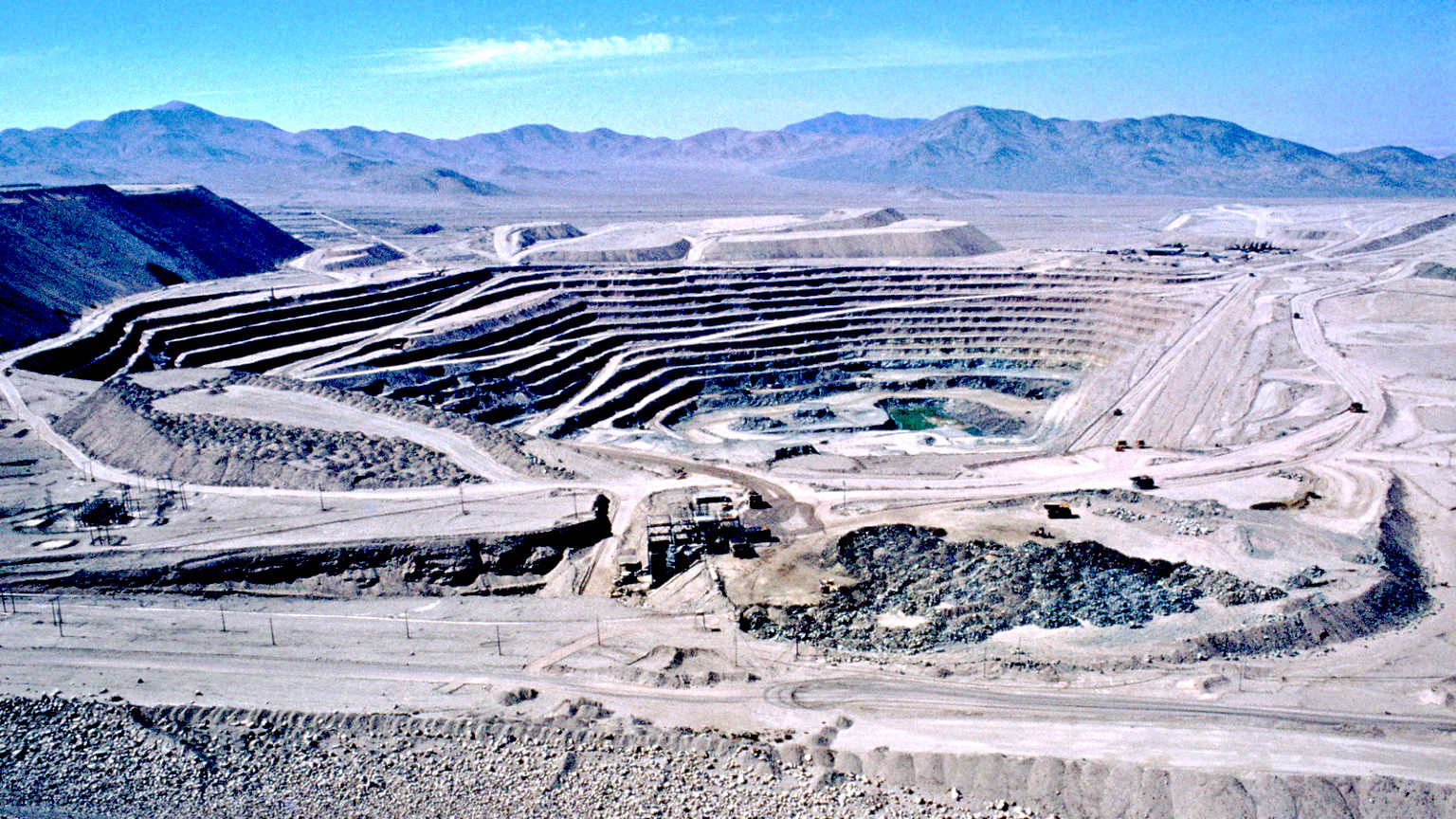 “We should not be speaking of any kind of extraction in the Atacama salt flat,” Ramón Morales Balcázar told us a few days after the sinkhole was discovered. Morales Balcázar is the founder of Fundación Tantí, a nongovernmental organization in San Pedro de Atacama that is dedicated to the promotion of agroecology and socio-environmental sustainability.

“The Atacama salt flat is exhausted, [and has been] deeply impacted by copper and lithium mining and tourism. We should be working to restore the ecosystem there,” said Morales Balcázar.

The word “exhausted” is also the title of a new report coauthored by Morales Balcázar that offers a chilling portrait of the depletion of groundwater as a result of global lithium extractors. “Lithium extraction, the newest industry to the region [of the Atacama salt flat], is now yet another way the scarce water resources are being depleted,” stated the report.

Morales Balcázar is part of a team of researchers known as the Plurinational Observatory of Andean Salt Flats (OPSAL). These scholars are engaged in fine-grained research about what they see as the ecocide of the salt flat, which stretches across Argentina, Bolivia and Chile.

A book written by these scholars in 2021 — Andean Salt Flats: An Ecology of Knowledge for the Protection of Our Salt Flats and Wetlands — offers a detailed assessment of what they call “green extractivism” and “green growth.” 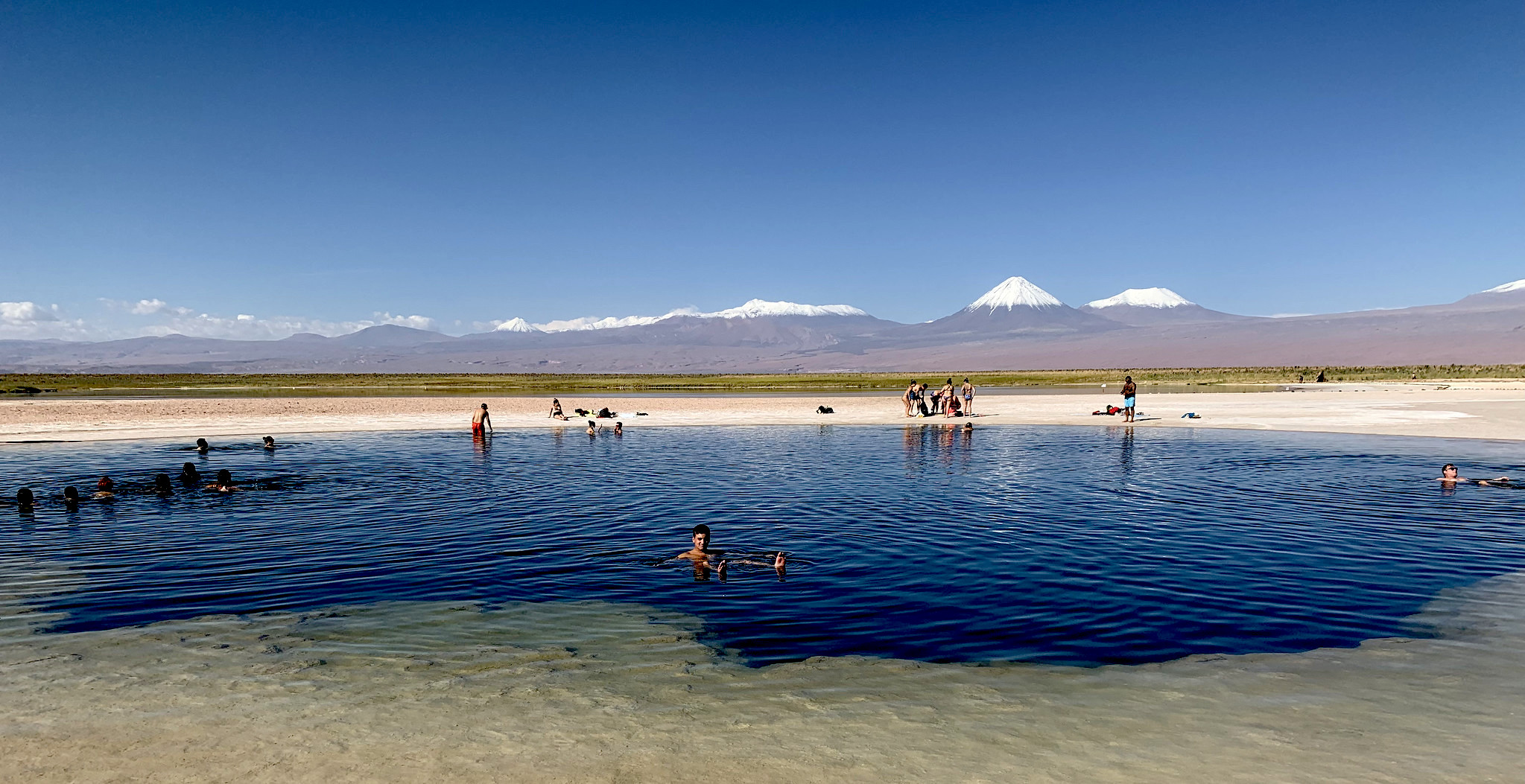 Extractivism refers to the extraction of natural resources from the Earth to make profits without any consideration for the Earth being mined or for the people who live in the areas being mined.

“Extraction and extractivism are not the same,” said Morales Balcázar. The former is the mere removal of natural resources, which can be done sustainably without harming the earth, and is carried out for the social well-being of the people who live near the mines.

“We have been holding conversations with Indigenous institutions and trade unions to imagine different regimes of extraction,” Morales Balcázar told us. 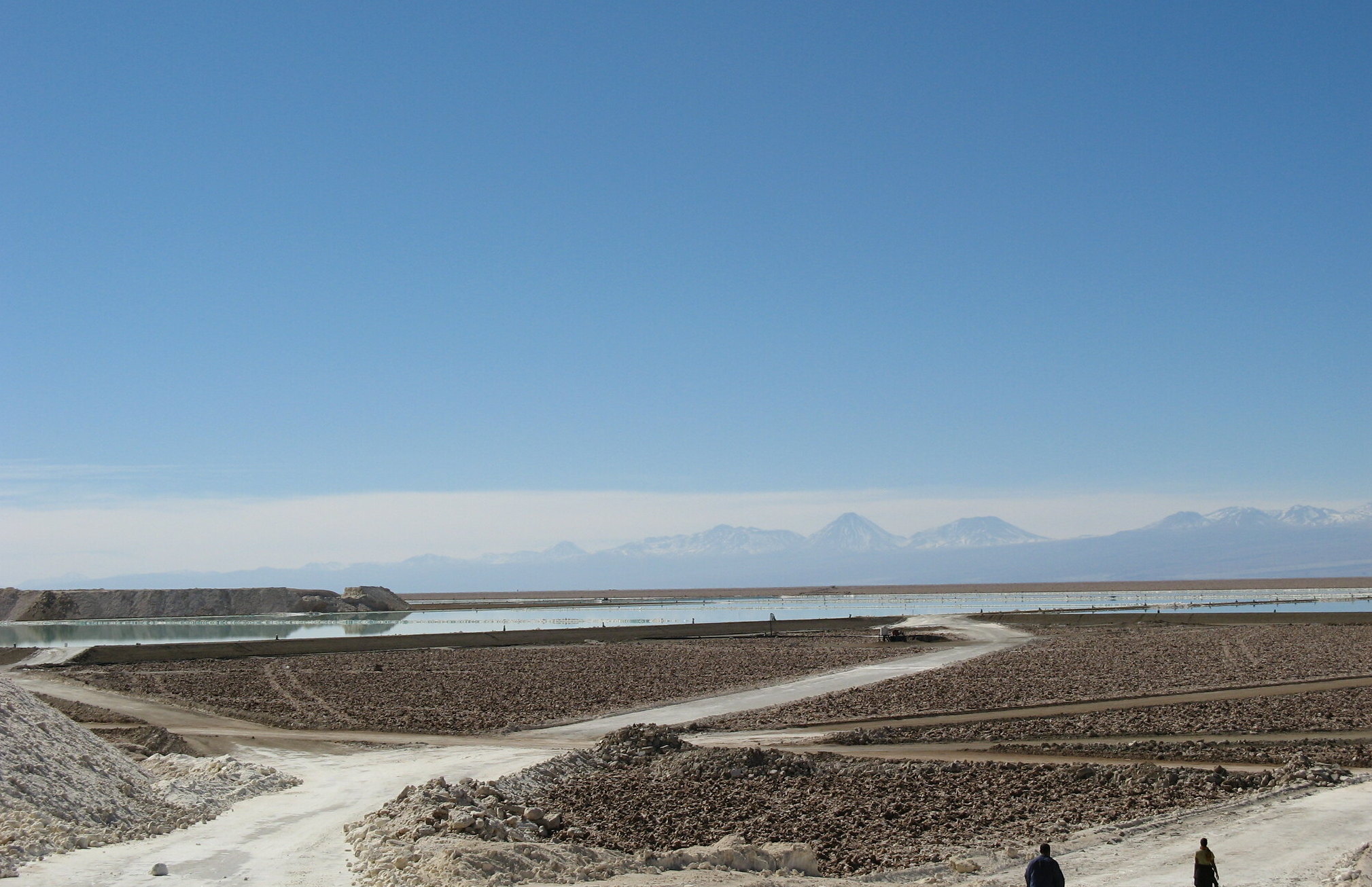 When the workers at Albemarle — a U.S. mining company — went on strike in 2021, Morales Balcázar and other colleagues spoke with them about the possibility of thinking about new kinds of extraction techniques, although “it is really not something we can see in the near future,” said Morales Balcázar. One reason why miners at Albemarle and the Indigenous institutions (such as the Consejo de Pueblos Atacameños) cannot conceive of any alternative is that even if they get trinkets from the mining wealth, that is still seen as a better option than facing unemployment.

North of Chile, in Bolivia, the concept of “resource nationalism” has framed the debate around lithium extraction in the country.

In 1992, the government of then-Bolivian President Jaime Paz Zamora signed an agreement with the U.S.-based company Lithium Corporation of America, now known as FMC Corporation, which “allowed the company to take all the lithium it could, giving Bolivia only eight percent of the profits. Many Bolivians were outraged over the deal,” according to a 2010 article in The New Yorker. This led to protests by the Potosí Civic Committee, which eventually ended the contract.

When Evo Morales took over as president of Bolivia in 2006, the residue of this battle shaped his “resource nationalism” approach to lithium and other minerals.

“He vowed to ‘industrialize with dignity and sovereignty,’ promising that raw lithium would not be exploited by foreign corporations but instead processed by state-controlled entities in Bolivia and transformed into batteries,” noted a 2018 article in Bloomberg. 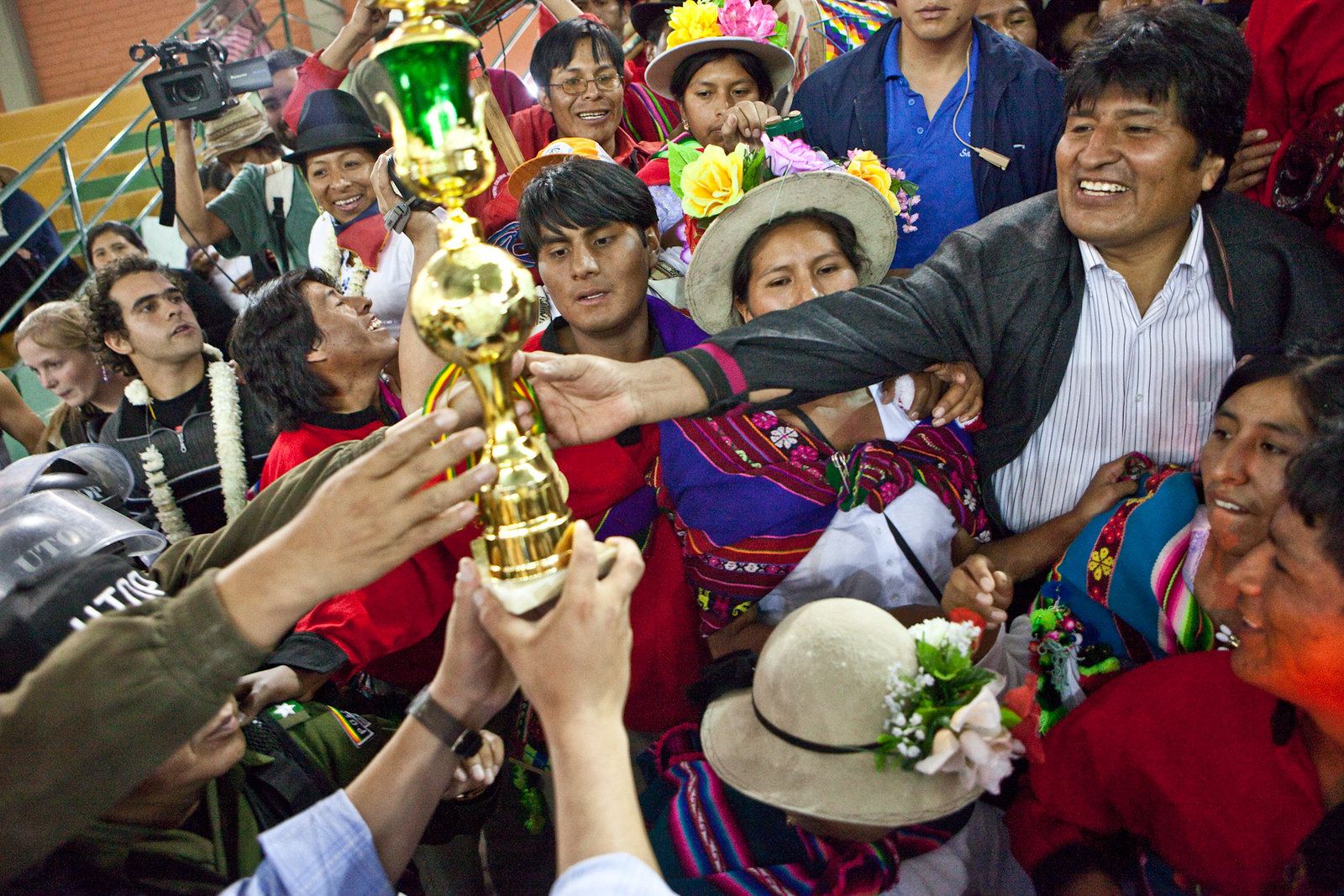 In 2007, Bolivia developed a lithium industrialization policy. The Mining Corporation of Bolivia (Comibol), we learned from officials there at the time, encouraged Bolivian scientists to develop and patent traditional methods of extraction through evaporation (although this method has struggled due to the high levels of magnesium found in the Bolivian lithium).

Morales’ government invested heavily in the lithium industrialization scheme, which led to Bolivia being able to develop its own batteries (including cathode production) and develop its own electric car through the state-owned Quantum Motors.

To control and manage lithium production, a company called Yacimientos de Litio Bolivianos (YLB) was created in 2017 by the government.

“We were making great progress,” Evo Morales told us, “until the coup of 2019 and then the pandemic.”

The coup eventually led to his ouster.

“We will coup whoever we want,” wrote Elon Musk, whose company Tesla relies on lithium for its batteries and electric cars. Such is the anger against the possibilities of “resource nationalism.” 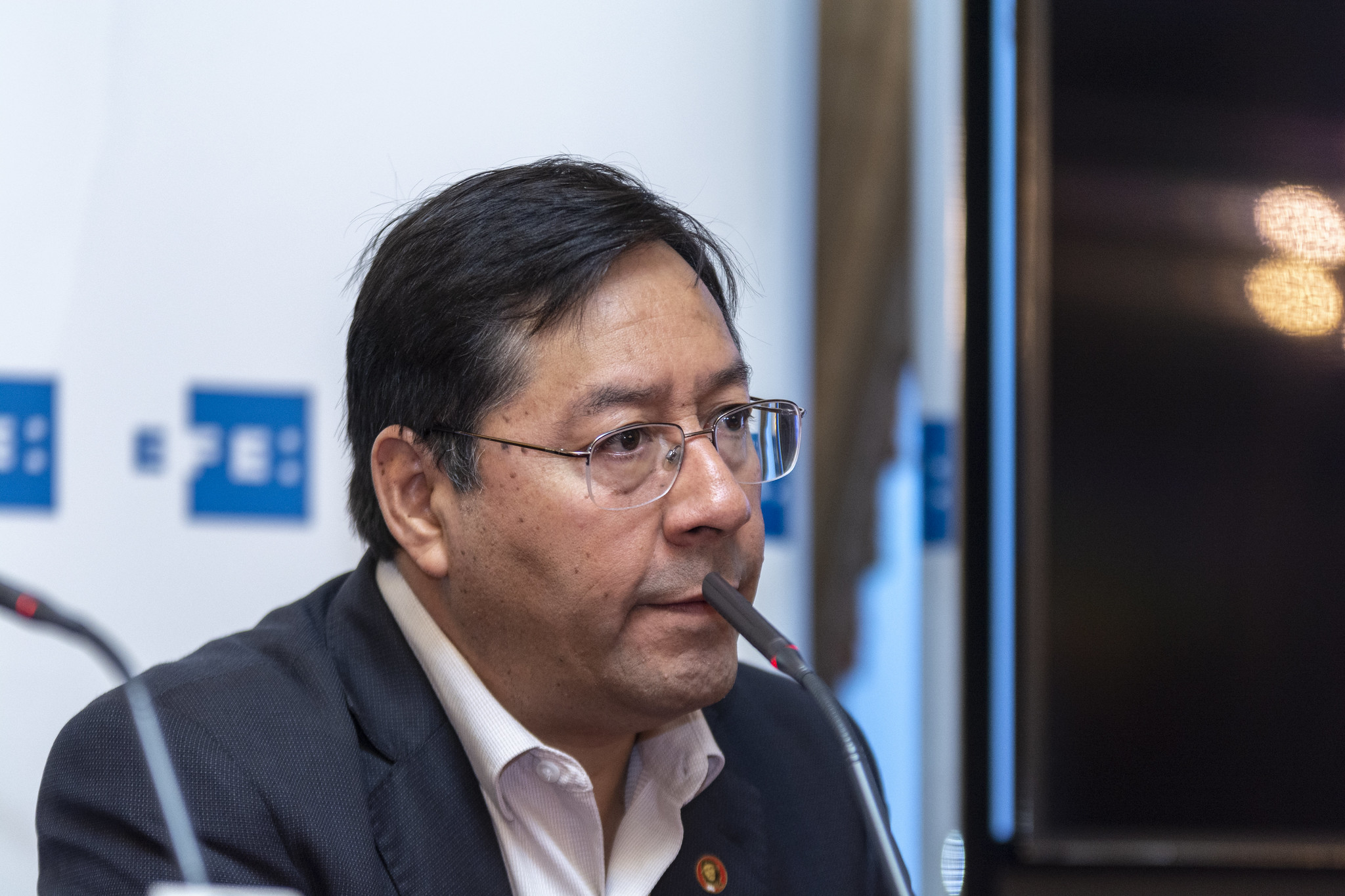 Developments in Bolivia show that new ways of extraction are being explored, even if these are not perfect. Environmental challenges in the Salar de Uyuni, the world’s largest salt flat, and grumbles by people who live there continue to define lithium extraction.

However, the lithium industrialization policy and the great care taken by the country for what the Bolivians call Pachamama — the Earth — during the extraction process offer some differences from the extraction work done by the large Canadian and U.S. mining companies.

In Chile, Lester Calderón, a union leader in the city of Antofagasta, who ran for governor in 2021, wrote an article in January in which he argued that the Indigenous communities must decide about the way lithium is used and that the resources (including water) of Chile must be nationalized.

These elements are in place in Bolivia, and yet there are challenges ahead for the people there.

Bolivia’s current President Luis Alberto Arce Catacora hopes to renew the state-led lithium industrialization policy but cannot find the resources domestically to do so. That is why his government has embarked on a process of drawing in investment from outside (currently, six firms from China, Russia and the United States are still competing to secure the bid).

The center of the struggle in Bolivia is Potosí, where the Spaniards, who ruled the region, had for centuries hollowed out the earth to draw silver to export to Europe.

“We were the center of [silver] exploitation but remained at the fringes of the country’s decision-making,” Potosí government official Juan Tellez told Reuters. “That is what we are trying to avoid now with lithium.”

The people of Potosí, Bolivia, like those of Tierra Amarilla in Chile, want to imagine a different kind of extraction: one that is controlled by those who live by the sources of the metal and one that does not destroy the earth, creating sinkholes everywhere.

Vijay Prashad is an Indian historian, editor and journalist. He is a writing fellow and chief correspondent at Globetrotter. He is an editor of LeftWord Books and the director of Tricontinental: Institute for Social Research. He is a senior non-resident fellow at Chongyang Institute for Financial Studies, Renmin University of China. He has written more than 20 books, including The Darker Nations and The Poorer Nations. His latest books are Struggle Makes Us Human: Learning from Movements for Socialism and (with Noam Chomsky) The Withdrawal: Iraq, Libya, Afghanistan, and the Fragility of US Power.

Taroa Zúñiga Silva is a writing fellow and the Spanish media coordinator for Globetrotter. She is the co-editor with Giordana García Sojo of Venezuela, Vórtice de la Guerra del Siglo XXI (2020). She is a member of the coordinating committee of Argos: International Observatory on Migration and Human Rights and is a member of the Mecha Cooperativa, a project of the Ejército Comunicacional de Liberación.

This article was produced by Globetrotter and published by Peoples Dispatch.