A committee of the Democratic Socialists of America’s statement urging a negotiated peace settlement is coming under the usual attacks for being Kremlin propaganda. That shows the shrunken spectrum of debate over this conflict. 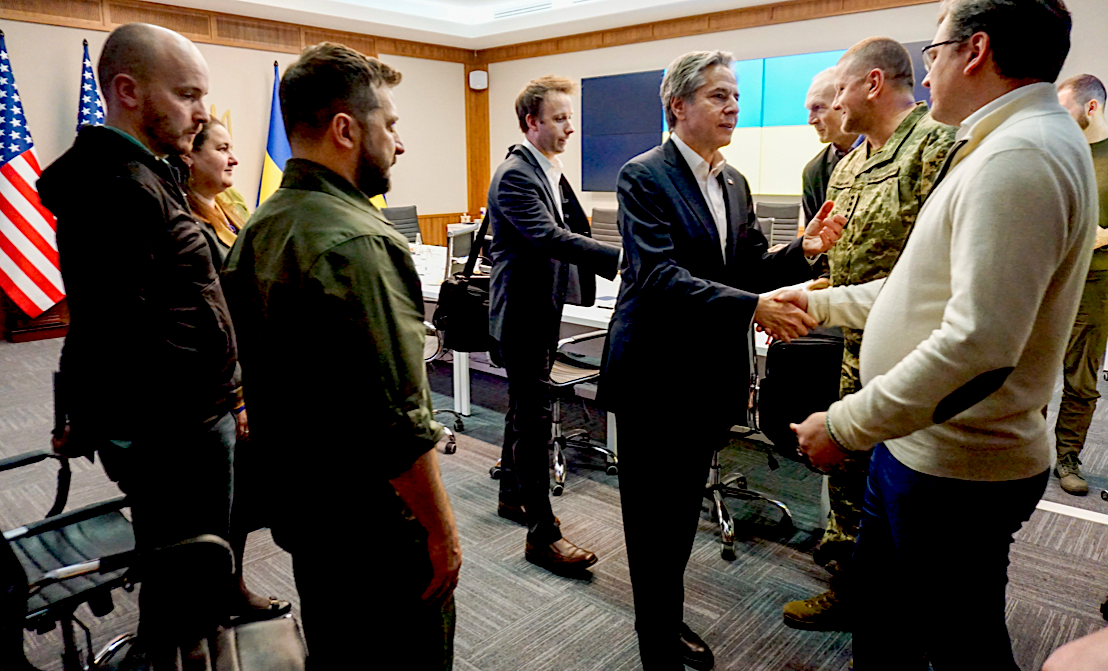 During an April 24 trip to Kiev, U.S. Secretary of State Antony Blinken, center, in suit, greets an official as Ukrainian President Volodymyr Zelensky, second from left in foreground, looks on. (DoD)

The International Committee of the Democratic Socialists of America has released a statement opposing the U.S. government’s ongoing proxy war in Ukraine, saying the billions being funneled into the military-industrial complex “at a time when ordinary Americans are struggling to pay for housing, groceries, and fuel” is “a slap in the face for working people.”

The statement advocates a negotiated settlement for peace, saying that continuing to pour weapons into the country will “needlessly prolong the war, resulting in more civilian deaths” and that it “risks escalating and widening the war — up to and including nuclear war.”

In response to this entirely reasonable and moderate position, the DSA is currently being raked over the coals with accusations of Kremlin loyalty and facilitation of murder and bloodshed by blue-check-marked narrative managers on Twitter. This is because the only acceptable positions for anyone of significant influence to have about this war range from supporting continuing current proxy warfare operations to initiating a direct hot war between NATO and Russia.

That’s how narrow the permissible spectrum of debate has been shrunk regarding this conflict: status quo hawkish to omnicidal hawkish. Anything outside that spectrum gets framed as radical extremism.

“The smart way to keep people passive and obedient is to strictly limit the spectrum of acceptable opinion, but allow very lively debate within that spectrum — even encourage the more critical and dissident views. That gives people the sense that there’s free thinking going on, while all the time the presuppositions of the system are being reinforced by the limits put on the range of the debate.”

This spectrum of debate has been shrunk on the one hand by imperial spinmeisters continually hammering home the message that any support for de-escalation and diplomatic solutions is “appeasement” and indicative of Russian sympathies, and on the other by hawkish pundits and politicians pushing for the most freakishly aggressive responses to this war possible.

The DSA is once again getting viciously attacked for making the extremely controversial recommendation that the US pursue a diplomatic settlement instead of endless weapons shipments. Never ceases to be amazing that this is now considered a crazed, radical, radioactive position: https://t.co/d2YKS9C7Xx

By forbidding the spectrum of acceptable debate to move toward peace while shoving it as hard as possible in the direction of warmongering extremism, imperial narrative managers have successfully created an Overton window wherein the only debate permitted is over how directly and forcefully Russia should be confronted, with calls for peace now falling far outside that window.

Which is a problem, because both direct NATO hot war with Russia and continuing along the empire’s current course of action in Ukraine are stupid. Direct conflict between nuclear powers likely means a very fast and very radioactive third world war, and the status-quo proxy warfare approach isn’t stopping Russia as more and more territory is taken in the east in cool defiance of Western claims that Ukraine is bravely vanquishing its evil invaders.

Biden administration officials have told the press that they doubt Ukraine will even be able to reclaim the territory it has lost already.

Unless and until something significant changes, Ukraine has no apparent path to victory in this war anytime soon.

In short, there is no exit strategy to this proxy war. There are no plans in place to deliver Russian President Vladimir Putin a swift defeat and the Biden administration remains steadfastly dismissive of even the slightest gestures toward diplomacy with Moscow.

Before he announced he was stepping down, U.K. Prime Minister Boris Johnson had reportedly been buzzing around admonishing Ukraine’s President Volodymyr Zelensky, France’s President Emmanuel Macron and who knows who else not to work toward peace in Ukraine. The doors to ending this war quickly by either winning it or negotiating a peace settlement are both bolted shut, all but guaranteeing a long and bloody slog. 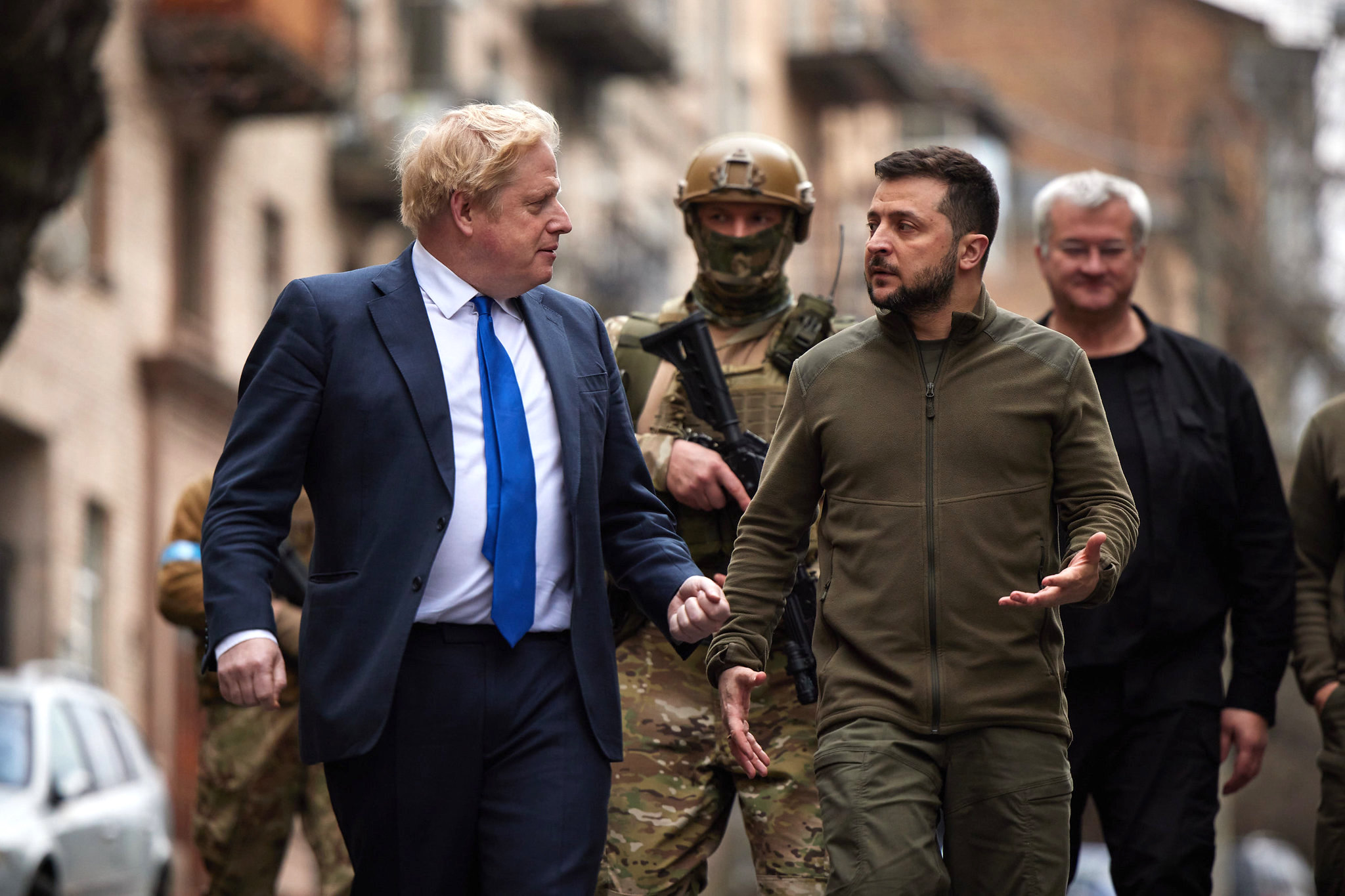 Which as it turns out suits Washington just fine. Biden administration officials have stated that the goal is to use the Ukraine war to “weaken” Russia, and the U.S. already has an established pattern of working to draw Moscow into costly military quagmires as we saw in both Afghanistan and Syria.

Continuing to pour weapons and military intelligence into Ukraine while working to cut Russia off from the world stands no chance of ending the war in a timely manner, but it does stand a pretty good chance of bleeding and weakening Moscow.

And since this is the course of action that has been taken by the empire, we can only assume that this is its desired outcome: not victory, not peace, but a long and grueling war.

Confirms that Ukrainian Pravda story from a couple of months ago. Angloid political elites don't want this war to end until they're satisfied enough Russians are killed to kneecap Russia as a rival—no matter how many dead Ukrainians it takes to do so.https://t.co/alKLzwy7DF

Whenever you point out the insanity of this approach, you’ll get useful idiots of the empire objecting that by criticizing U.S. proxy warfare and supporting a negotiated settlement you are guilty of “appeasement” and exactly the same as Neville Chamberlain, because the only argument empire apologists ever have is to compare every U.S.-targeted government to Nazi Germany.

According to these propaganda-addled empire automatons, having the story of not compromising with Putin and not committing the sin of “appeasement” is worth sacrificing everyone in the entire nation of Ukraine. They will happily throw every Ukrainian life into the gears of this war while they sit safe at home eating Funyuns and tweeting, just so they can have that “we didn’t compromise with Putin” story hanging on their mental mantlepiece.

How many more lives are such people prepared to feed into an unwinnable war which the West knowingly provoked? How many more of other people’s children are they prepared to sacrifice? How long does the bloodshed need to drag on before their “no appeasement” story loses value to them? How long until people wake up from their propaganda-induced comas and realize we’ve been manipulated into supporting a proxy war which benefits ordinary people in no real way, and in fact impoverishes us and threatens our very lives?

There is no morally consistent argument for continuing this proxy war in the way it has been going. If you actually value life and peace, the only way out is through negotiation and compromise. I point this out not because I believe it will happen, but to hopefully help a few more people open their eyes to the fact that we are being deceived.

← When the World Is the Enemy
Chris Hedges: War With Iran →

37 comments for “Caitlin Johnstone: This Proxy War Has No Exit Strategy”