Humberto Márquez reports on the new international non-alignment trend triggered by the war in Ukraine. 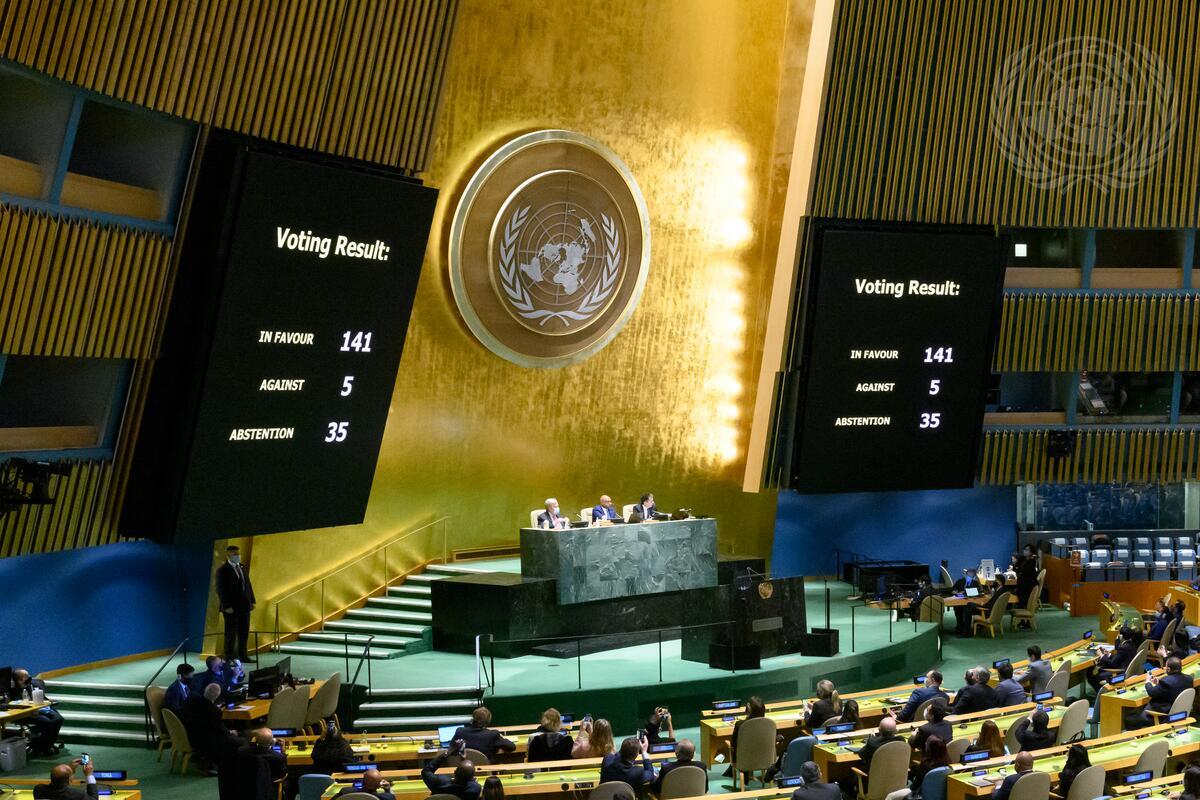 Numerous countries of the developing South are distancing themselves from the contenders in the war in Ukraine, using the debate on the conflict to underscore their independence and pave the way for a kind of new de facto non-alignment with regard to the main axes of world power.

Meetings and votes on the conflict at the United Nations and in other forums, the search for support or neutrality and negotiations to cushion the impact of the economic crisis accentuated by the war are the spaces where the process of new alignment is taking place, according to analysts consulted by IPS.

Once Russian forces began their invasion of Ukraine on Feb. 24, the United States “activated and consolidated the trans-Atlantic alliance with Europe to confront Moscow, and has been seeking to draw in allies in Asia, but the situation there is more complicated,” said Argentine expert in negotiation and geopolitics, Andrés Serbin, speaking from Buenos Aires.

Serbin, author of works such as Eurasia and Latin America in a Multipolar World and chair of the academic Regional Economic and Social Research Coordinator, believes that many Asian countries do not want any alignment that would compromise their relationship with that continent’s powerhouse, China.

The rivalry between the United States and China – a growing trading partner and investor in numerous developing nations – fuels the distancing demonstrated by countries of the so-called Global South in the face of the conflict in Ukraine, a priority for the entire West.

Doris Ramirez, professor of International Relations at the Javeriana University in Colombia, argues that “now countries are better prepared to take a position and vote in international forums according to their interests and not according to ideological alignments.

“Emblematic cases are India, which is not going to break its excellent relations with Russia, its arms supplier for decades, or Saudi Arabia, now more interested in its relationship with China as the United States withdraws from the Middle East,” Ramirez observed from Bogota.

The struggle between nations that were ideologically aligned – with the United States or the then Soviet Union – led in 1961 to the creation of the Non-Aligned Movement (NAM), which sought to stay equally distant from the dominant blocs while promoting decolonization and the economic interests of the South.

Its promoters were prominent leaders of what was then called the Third World: Jawaharlal Nehru of India, Sukarno of Indonesia, Gamal Abdel Nasser of Egypt, Josip Broz “Tito” of Yugoslavia and Kwame Nkrumah of Ghana.

Over the years, the Non-Aligned Movement grew to 120 members, many of which were clearly aligned with one of the blocs and, although it still exists formally, its presence and relevance declined not only with the disappearance of its leaders, but also when the socialist bloc ceased to exist as such after the fall of the Berlin Wall in 1989 and the collapse of the Soviet Union. 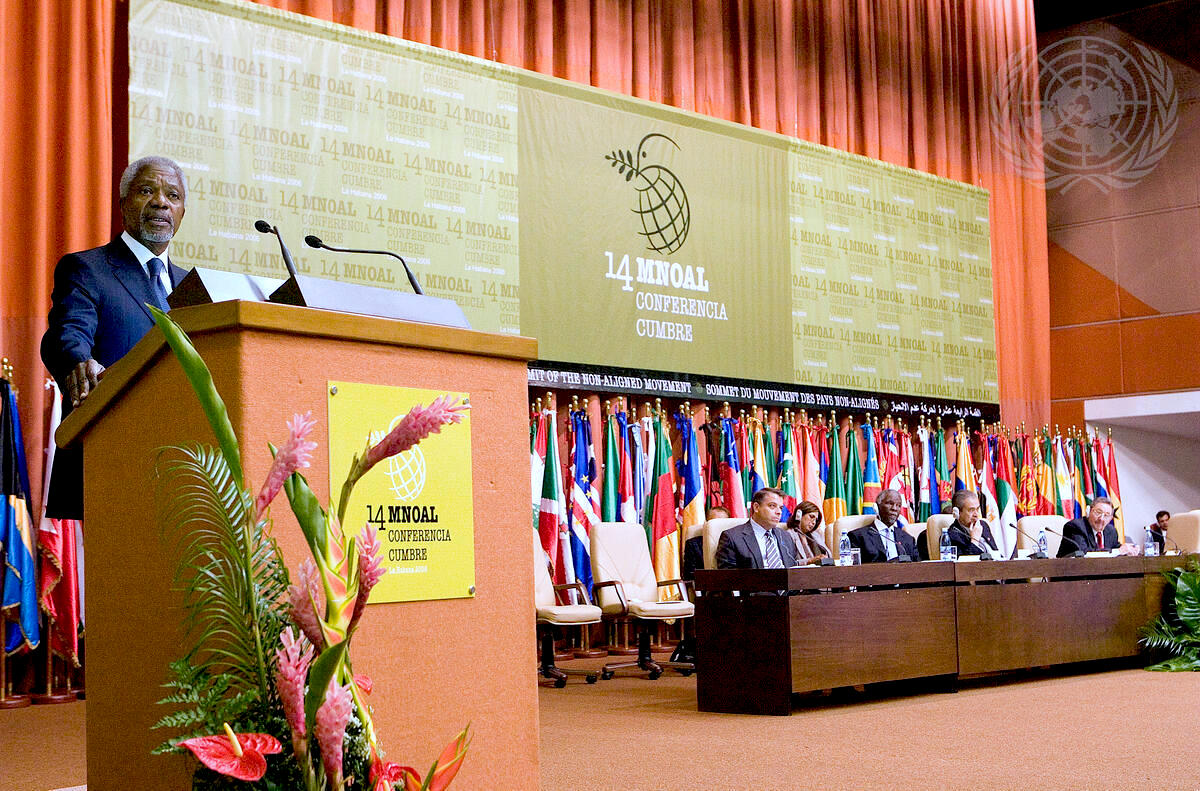 The invasion of Ukraine was quickly addressed by the 193-member U.N. General Assembly, which on March 2 debated and approved a resolution condemning the invasion by Russian forces and demanding an immediate withdrawal of the troops, reiterating the principle of respect for the sovereignty and territorial integrity of all countries.

After 117 speeches, the vote – for, against, abstentions and absences – reflected on the display board at U.N. headquarters, became a first snapshot of the current “non-alignment” – the decision by many countries of the South not to subscribe to the positions of Moscow or its rivals in the West, led by the United States and the European Union.

“It is difficult for a country to support an invasion, it is not possible to find within the U.N. or international law a formula to justify it,” said former Venezuelan ambassador Oscar Hernández Bernalette, who has been a professor at the University of Cairo, in Egypt, and the Central University of Venezuela.

Therefore, “in order not to remain in the orbit of Moscow or Brussels or Washington, abstaining from voting is a way to demonstrate neutrality,” said Hernández Bernalette. 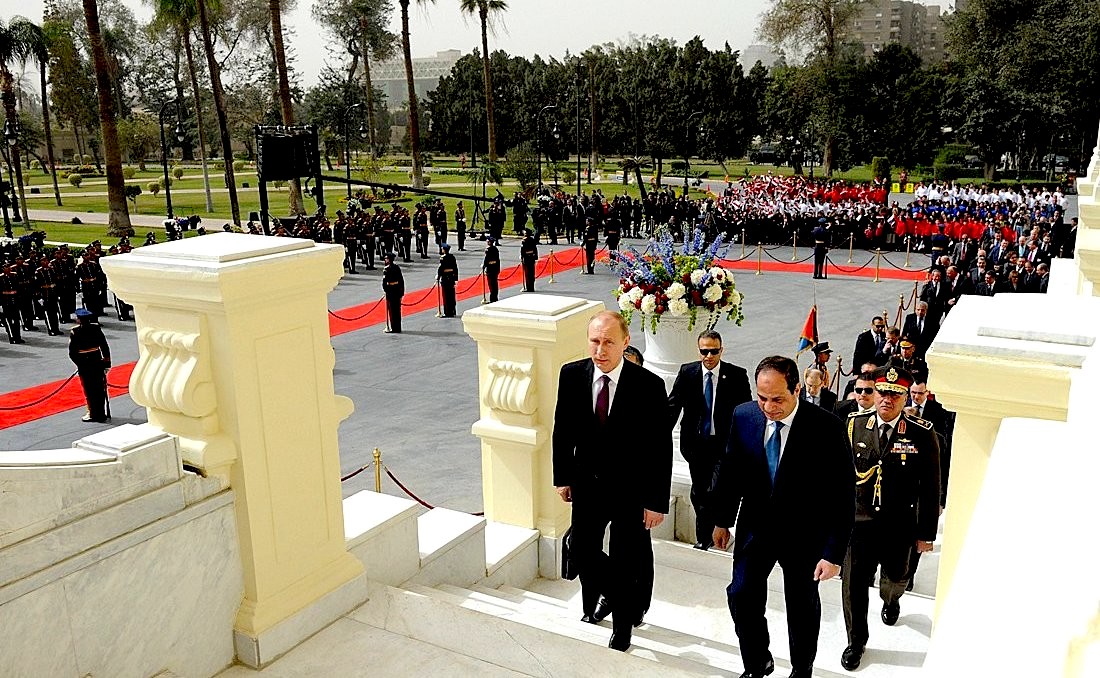 Of the 35 countries that abstained, 25 were from Africa, four from Latin America (Bolivia, Cuba, El Salvador and Nicaragua; Venezuela was unable to vote because of unpaid dues) and 14 from Asia, including countries with a strong global presence such as China, India, Pakistan and Iran, and former Soviet or socialist republics such as Laos, Mongolia and Vietnam.

A second resolution was discussed and approved at the Assembly on March 24, to demand that Russia, on humanitarian grounds in view of the loss of civilian lives and destruction of infrastructure, cease hostilities.

The vote was practically the same, with 140 votes in favor, the same five against and 38 abstentions, which this time also included Brunei, Guinea-Bissau and Uzbekistan.

A third confrontation took place on April 7, to decide on the suspension of Russia from the U.N. Human Rights Council, made up of 47 states chosen by the General Assembly, which meets several times a year in Geneva. 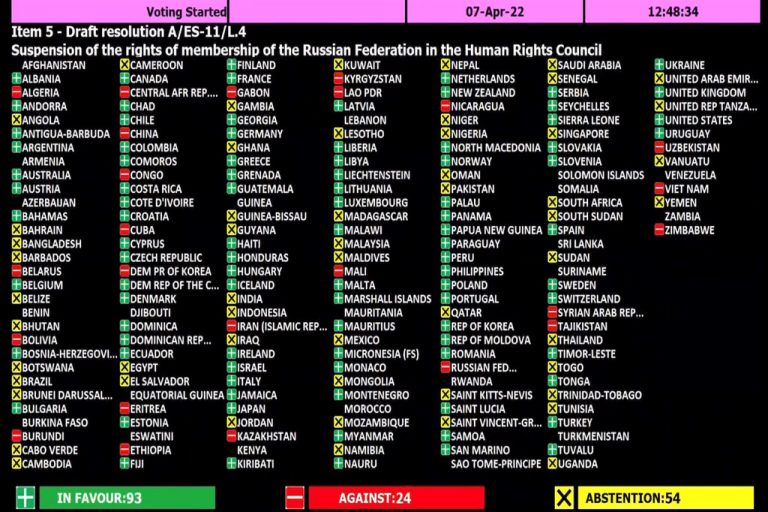 Display board at the UN General Assembly on the suspension of Russia from the Human Rights Council, with fewer countries voting with Western powers. (U.N.)

Moscow’s critics then drummed up 93 votes in the Assembly, but there were 24 against and 58 abstentions – evidence of independence and criticism of the web of alliances and institutions that guide international relations.

This time, countries that previously abstained, such as Russia’s neighbors in Central Asia, and Algeria, Bolivia, China, Cuba and Iran, voted against the proposal, and many of those who previously supported it, such as Barbados, Brazil, Kuwait, Mexico, Nigeria, Saudi Arabia, Senegal, Thailand and the United Arab Emirates, abstained.

Grouping, But in a Different Way

Bilateral and group forums and negotiations are being put on new tracks as the conflict in Ukraine drags on, with new proposals for understandings and alliances, and also new fears.

The impact of the war on the energy markets – as well as on food and finance – was immediate and created room for new realignments. Thus, the United States, as it watched the price of fuel rise at its gas stations, went in search of more oil supplies, from the Middle East to Venezuela.

Washington held two significant summits in recent weeks: one in Jakarta, with 10 members of the Association of Southeast Asian Nations (Asean) interested in sustaining their relationship with the U.S. while maintaining the ties woven with China, and another in Los Angeles: the ninth Summit of the Americas. 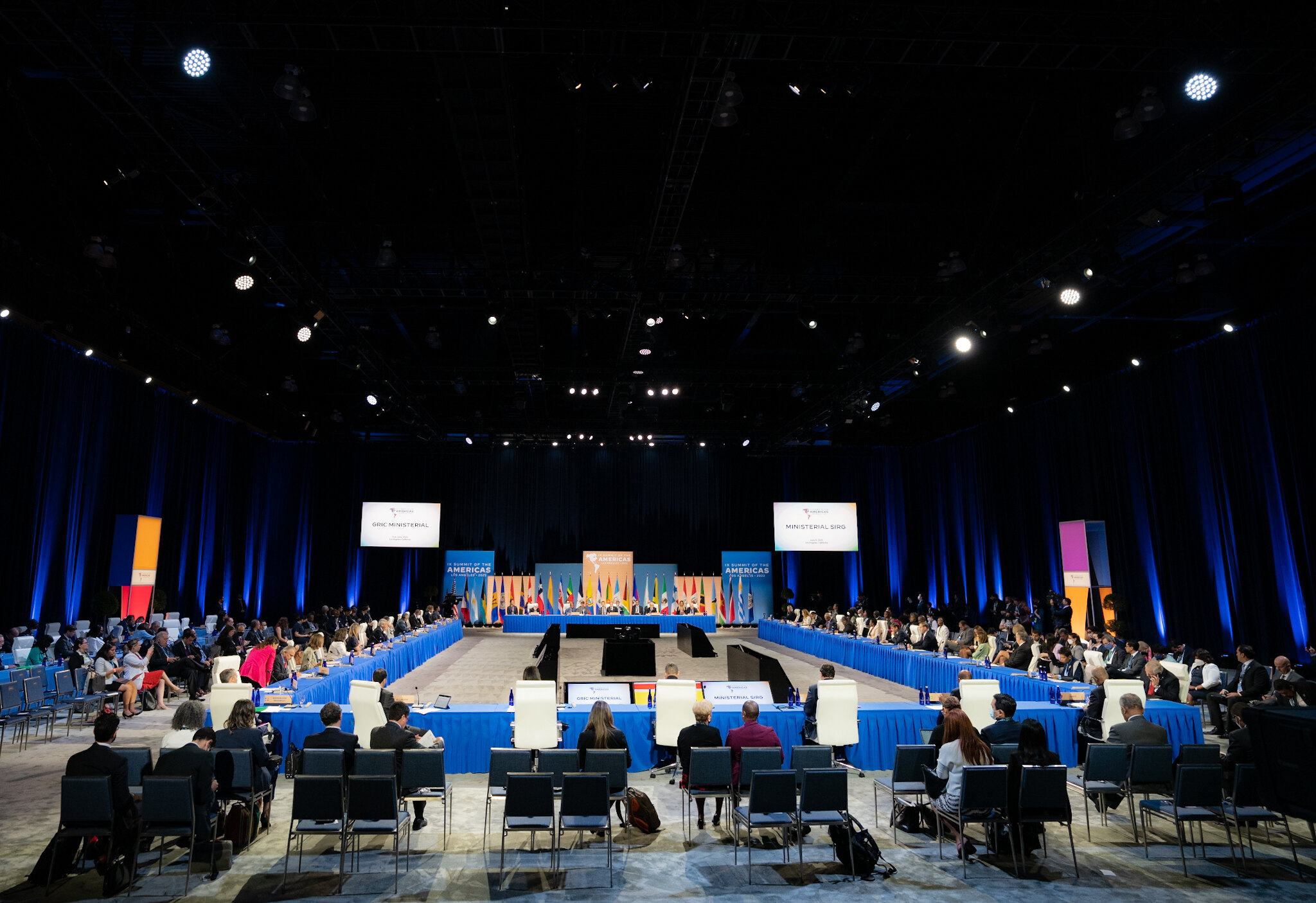 U.S. Secretary of State Antony Blinken leading a meeting at the Summit of the Americas in Los Angeles on June 8. (State Department, Freddie Everett)

This triennial meeting served as an opportunity for governments in this hemisphere to demonstrate their independent stance and refrain from automatic alignment with Washington. In addition to the three countries not invited (Cuba, Nicaragua and Venezuela), the heads of state of seven other countries decided not to attend, to protest the exclusion of their neighbors.

This snub marked the summit, in which Washington was barely able to cobble together an agreement on migration, with other issues pushed to the backburner, while Latin American countries, still lacking a united front, continue to develop their relations with rivals such as Russia and China.

In the Caribbean, in Asia and especially in Africa, the old relationship between former colonial powers such as France and the United Kingdom – which are confronting Moscow as partners in the Atlantic alliance – and their former colonies is also waning.

“The world no longer works that way,” said Hernandez Bernalette. “For many African or Asian countries, the relationship with new economic players such as China is much more important, in addition to the ties, including military ties, with Russia.”

However, the loose pieces in the international scaffolding also give rise to fears and problems that seriously affect the developing South, such as the possibility of an escalation of the conflict between China and Taiwan, or the grain shortages resulting from the war in Ukraine and affecting poor importers in Africa and Asia.

Serbin said that for the countries of the South, and in particular for those of Latin America, the conflict “offers opportunities, for the placement of energy or food exports for example, provided that the necessary agreements and balances with rival powers are maintained.”

“But if the confrontation escalates and spreads beyond Europe, it will be difficult to stay non-aligned. Our countries will then have to learn to navigate in troubled waters,” he concluded.

Humberto Márquez, who joined IPS in 1999, has been a journalist for more than 25 years, specializing in international news. He worked for 15 years with Agence France-Presse (AFP), 10 as assignment editor in Caracas, covering Venezuela, the Caribbean and the Guyanas. He also worked for more than five years in the international section of the Caracas newspaper El Nacional.

7 comments for “Staying Out of Troubled Waters”