Britain assisted Australia in setting up a team modeled on the U.K.’s notorious Information Research Department to run influence operations in the Asia-Pacific in the 1970s, John McEvoy and Peter Cronau report. 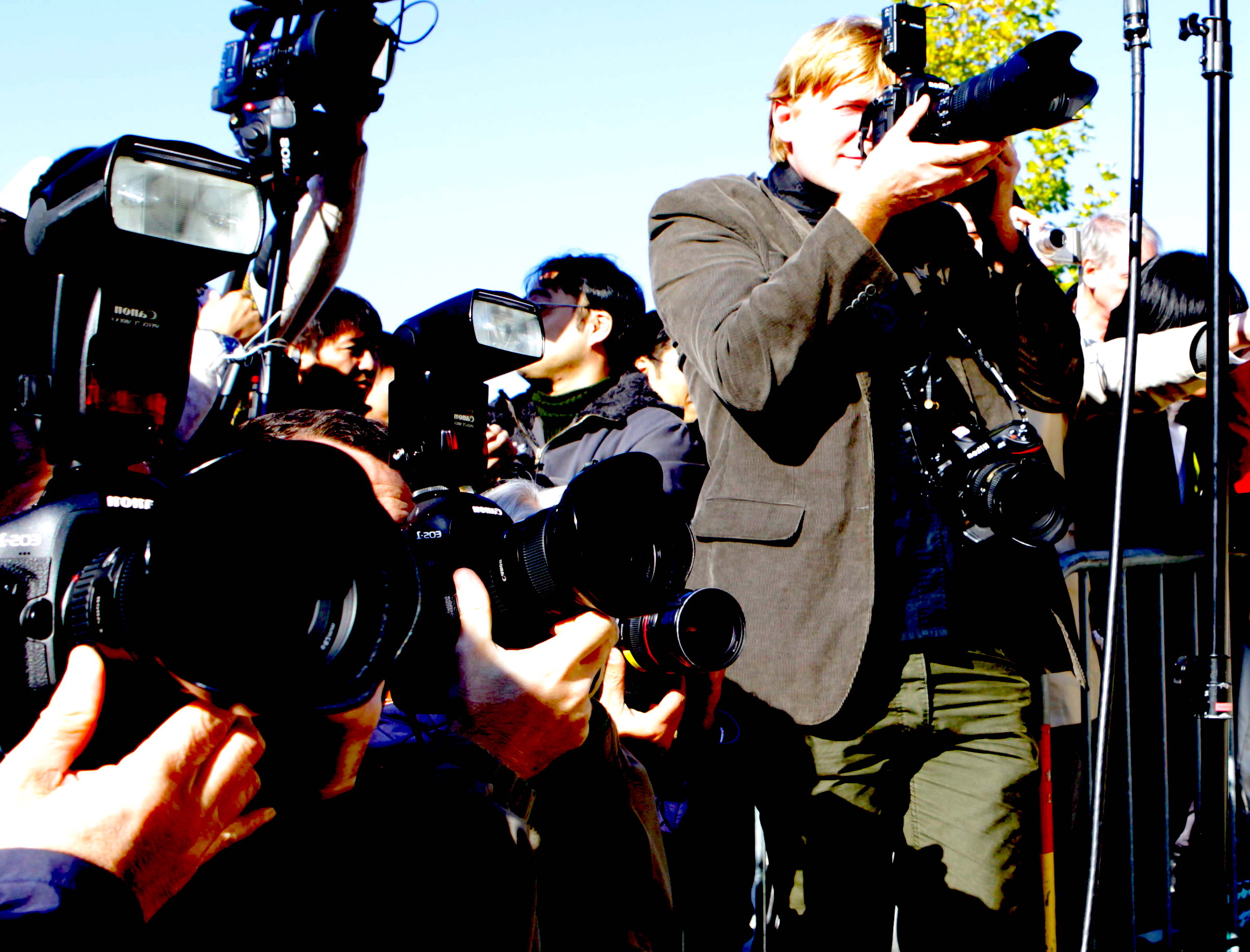 Journalists have been a main target of propaganda operations run by the British and Australian governments as part of a larger effort to shape events in the Asia-Pacific region. (US Mission Geneva, CC BY-ND 2.0)

In the early 1970s, officials from Australia’s Department of Foreign Affairs (DFA) visited Britain for propaganda training. This culminated in the creation of an Australian propaganda unit in 1971, whose operations were focused on preserving Western power across Asia.

The unit was modelled on the Information Research Department (IRD), which was Britain’s covert Cold War propaganda arm between 1948 and 1977. It was also staffed with two former IRD officials.

Details of Australia’s propaganda unit have remained secret until revealed in newly declassified U.K. Foreign Office files, and shine a renewed light on Anglo-Australian security co-operation during the Cold War.

Reddaway was a seasoned British propagandist. After serving in the Second World War, he joined the Foreign Office and played a key role in setting up the IRD. In the 1960s, he was assigned as the “coordinator of political warfare” in Indonesia, where Britain was inciting massacres in its effort to overthrow President Sukarno.

By 1970, Reddaway was concerned about a “diminution of British interest” in Asia. Two years earlier, the Harold Wilson government had announced the withdrawal of British troops from major military bases in South East Asia, notably Singapore and Malaysia. Meanwhile, the IRD was undergoing a structural reorganization and facing funding and staff losses.

Reddaway thus wanted to plug a gap of declining Western influence in the Asia-Pacific, and recommended that Australia boost its propaganda effort in the region. 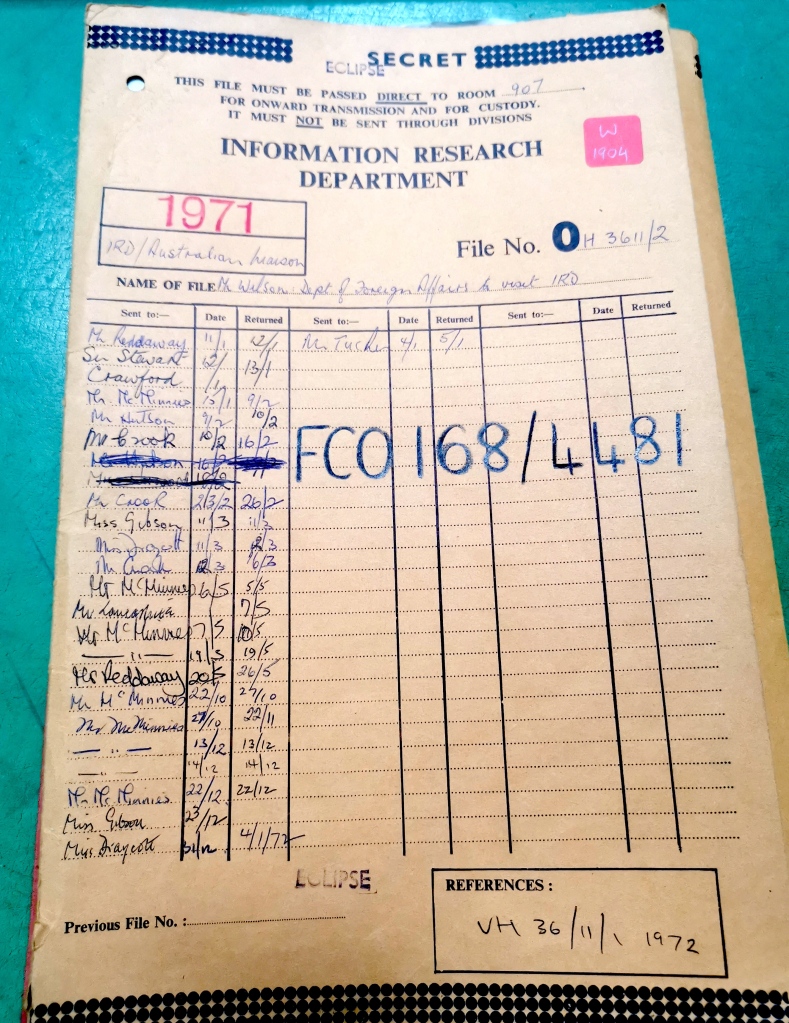 Recently declassified, this “Secret” file revealed for the first time that Australia had set up a propaganda unit in the Foreign Affairs Department, modeled on the U.K.’s Information Research Department, to run “information operations” spoon-feeding journalists with material designed to influence events in the Western Pacific and South East Asian region. (U.K. National Archives)

In Canberra, Reddaway asked the Australian foreign affairs chief Keith Waller whether Australia “should contemplate doing some information policy work” of its own — “information policy” being a gentleman’s euphemism for “covert propaganda.” He proposed that Australia “send someone to London to look at the work and functions” of the IRD.

In February 1971, the head of the information and cultural affairs branch of DFA, Michael Wilson, was dispatched from Canberra to the U.K. for two weeks. In London, he held “several long talks” with IRD officials about “setting up an IRD organisation for Australia.”

He was also given “a comprehensive picture of IRD’s present structure, the work of Asia and editorial sections, and IRD activities in SE Asia.”

Wilson was impressed by “the bipartisan nature of the support for IRD” in Britain, as well as “the lack of any political controversy surrounding it.” In Australia, however, he expressed fears that a similar propaganda unit would be used domestically by rival Australian politicians.

In early 1971, in the face of the disastrous Vietnam war and a resurgent Labor Party, head of the Treasury Billy McMahon and Defence Minister Malcolm Fraser were plotters in an internal party coup against their sitting Liberal Party Prime Minister John Gorton, with McMahon emerging as the new prime minister.

“If we let Billy loose with an outfit like this,” Wilson told British IRD official K.R. Crook, “he’d be off with it like a racehorse, using it against Fraser and Gorton.” Crook privately noted: “One has an awful fear that he could be right!” (Indeed, the IRD was frequently used by the British government to produce propaganda against perceived domestic opponents).

Wilson returned home to Australia via Hong Kong, where he secretly met the U.K. regional information officer and “held several long talks on… setting up an IRD organisation for Australia.” The files note that the senior Australian diplomat in Hong Kong, Roy Barcham, was “not, repeat, not conscious of the purpose of Wilson’s visit to London.”

Whitehall noted after Wilson’s return, that the Australians were expected to set up “a very modest research-and-output section in the DFA to provide a supporting arm for their political interests, and influences, in South East Asia”.

In May 1971, the head of the Department of Foreign Affairs, Keith Waller, informed Whitehall that Australia would “embark on a limited amount of information policy activity” — or propaganda — and said he was “interested in the possibility of recruiting a small number of IRD research and journalist staff.” 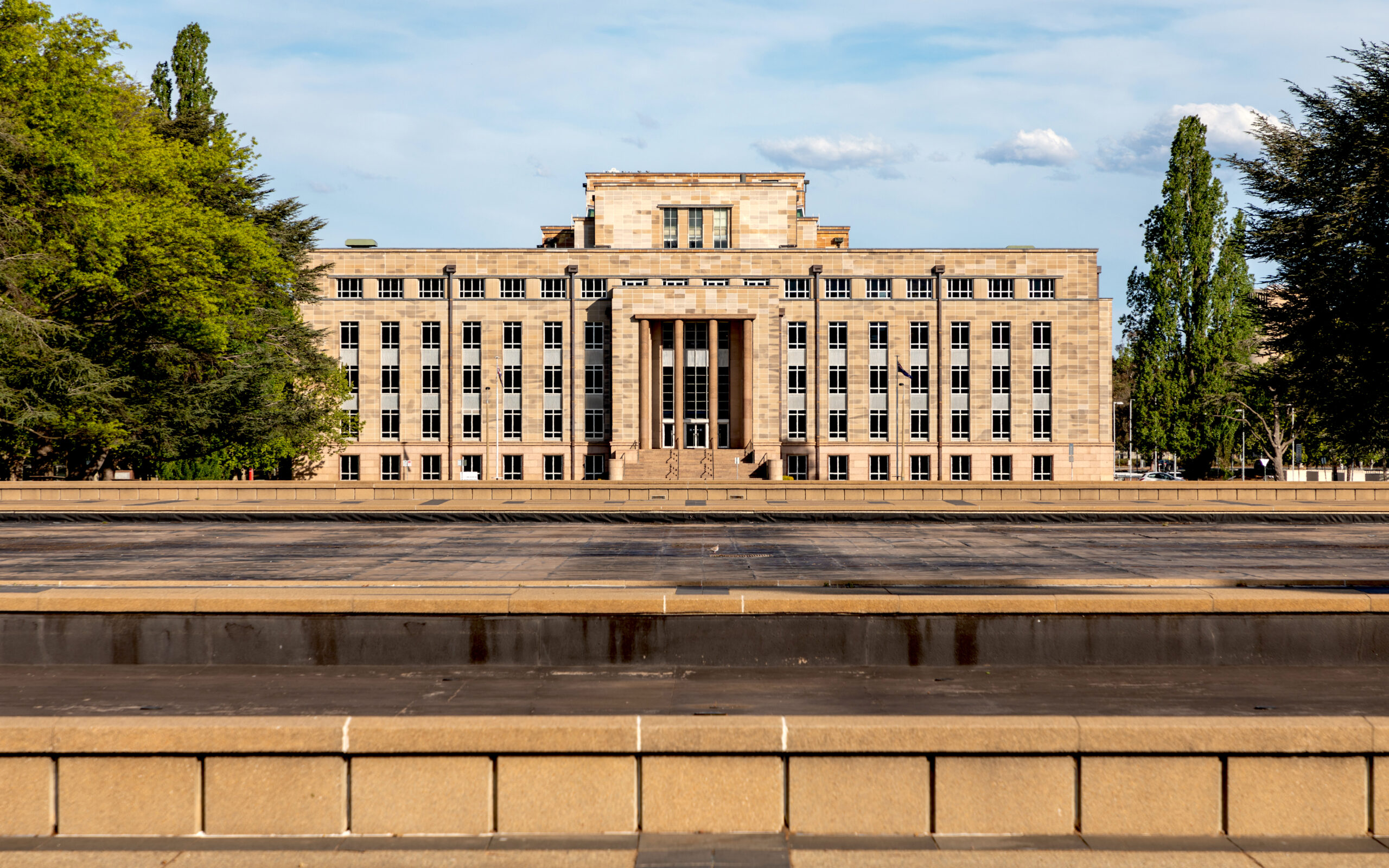 By October 1971, DFA official Noel Ross Smith was selected to be the principal research officer heading up the new secret propaganda unit. Ross Smith had been a journalist with the ABC and Sydney Morning Herald, before joining the Australian News and Information Bureau (ANIB) inside the Department of the Interior and later served in several Australian embassies.

Ross Smith had been Information Attaché in the Australian embassy in Djakarta from 1962 to 1965, providing contacts and information to Australian reporters and media outlets. His time there had coincided with the period IRD was very active in Indonesia producing propaganda designed to undermine left-leaning Sukarno.

In November 1971, Ross Smith visited the U.K. for a six-week attachment to the IRD, based in the Foreign Office at Whitehall in London. The purpose was for him “to learn as much as possible the detail of the [IRD] operations”, covering “projects, sources of information, contacts, production and distribution”.

Ross Smith was thus able to study “how IRD works as an all-purpose unattributable information arm.”

“As it is as much in our interest as in that of the Australians to get their organisation off the ground, we have given Ross Smith all the help we can,” wrote one IRD official, although details of some of the IRD’s covert operations were not handed over.

They met at the Foreign Correspondents Club at the Oriental Hotel, which McBain described in a file note as “that thieves kitchen of CIA stringers and other dubious characters.”

Australia’s propaganda unit commenced operations in late 1971, and was situated within the Political and Social Research Section (PSR) of the Department of Foreign Affairs (DFA).

In June 1973, IRD chief Thomas Barker wrote that “the Australians have for the last two years had a modest counterpart to IRD. Their organisation… was set up in 1971 on the basis of advice requested from, and provided by, IRD.” Its staff included “two former members of IRD.”

“There is an exchange of output, and consultation about this, between the two Departments,” Barker continued. 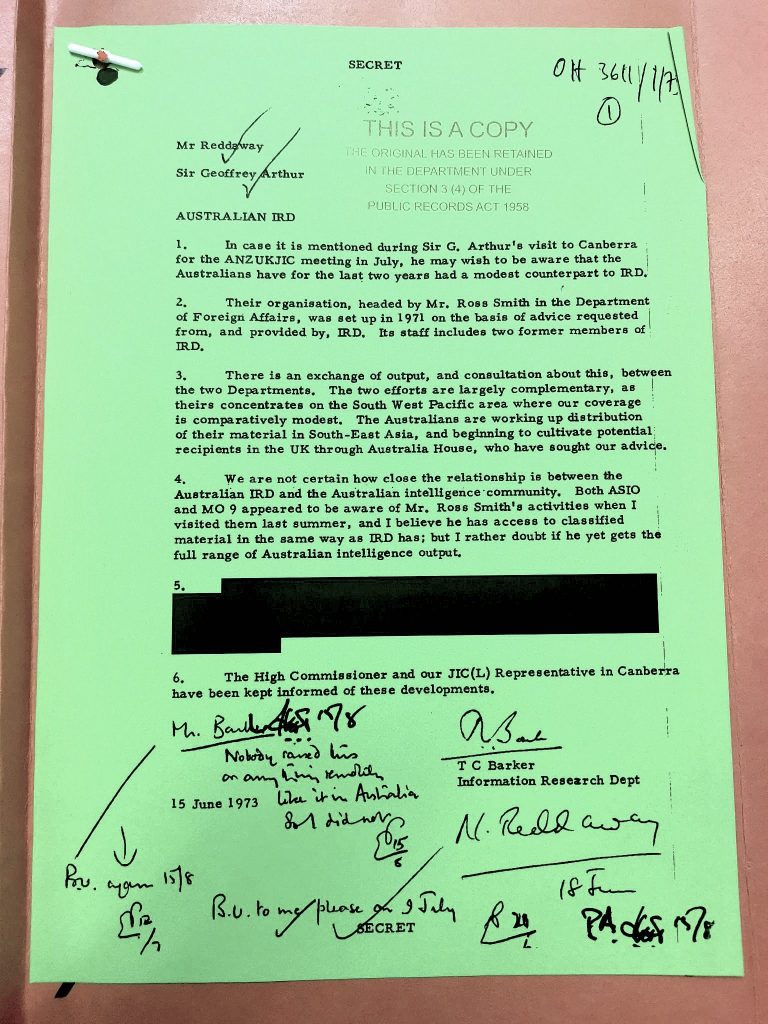 This document classified “Secret,” is a file note from the Information Research Department outlining their understanding of the Australian counterpart. Note that a paragraph is redacted, still being kept secret after 49 years. (U.K. National Archives)

“The two efforts are largely complementary, as theirs concentrate on the South West Pacific area where our coverage is comparatively modest. The Australians are working up distribution of their material in South-East Asia, and beginning to cultivate potential recipients in the U.K. through Australia House, who have sought our advice.”

With the Australian propaganda unit modelled on the IRD, the “material” distributed would likely have been unattributed research briefs and articles written for newspapers and journals, and the “potential recipients” would have been cooperative journalists writing on the region.

The unit was in operation for at least three years and it remains unclear from the files when it was eventually shut down.

In October 1974, the British embassy in Canberra reported that Ross Smith had “left the Political and Social Research Section” to take up a position as consul-general in Lae, Papua New Guinea, as the Australian territory prepared for independence in 1975.

Ross Smith later went on to serve as Australia’s high commissioner to Nauru and Malta and is now deceased.

After Ross Smith’s departure from the secret unit, the British embassy in Australia asked that future correspondence from the IRD be addressed to Australian DFA official, Richard Butler, who was at the time acting head of the PSR.

Butler told Declassified he had been appointed to the PSR section in 1974 by the department’s then Head of Public Affairs Richard Woolcott, who later served as Australia’s ambassador to Indonesia during its brutal invasion of East Timor in 1975.

Butler said he had been briefed by Woolcott to prepare press materials explaining the government position on East Timor both for other diplomats and for the domestic public. Australia supported Jakarta’s invasion and occupation of East Timor, during which over 180,000 people were killed.

Woolcott, now aged 95, told Declassified he could not recall the unit nor any contact with IRD.

Butler said his work in the Political and Social Research Section (PSR) of Foreign Affairs was usual public information work, focusing on explaining Australian government policy to the public. While he knew of Ross Smith, he says he was unaware of his precise role and hadn’t known about an IRD counterpart in Australia.

While it seems the IRD and its Australian counterpart in the PSR are no more, the role of propaganda in persuading and massaging the public’s perceptions of foreign policy continues.

In Australia, the Defence Force’s psychological operations unit, and in the U.K. the army’s psychological warfare unit of the 77th Brigade, are just two of the propaganda outfits exposed in recent years running information operations on the domestic public.

The newly released U.K. files help fill in the gaps in our understanding of the growth of propaganda and disinformation. Australian files on IRD and the PSR unit remain classified.

John McEvoy is an independent journalist who has written for International History Review, The Canary, Tribune Magazine, Jacobin, Brasil Wire and Declassified UK.

Peter Cronau is co-founder of Declassified Australia, and is a multi-award winning investigative journalist, writer and film-maker. He is co-editor of the recent book A Secret Australia – Revealed by the WikiLeaks Exposés.

← Stella Assange: ‘We Are Going to Fight This’
Thank You Readers! →