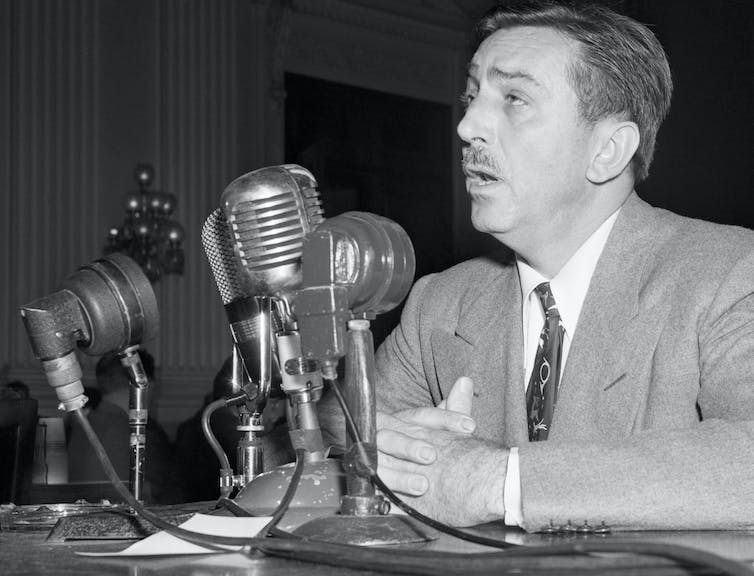 Walt Disney testified before the House Un-American Activities Committee claiming that communists once “took over” his studio. (Bettmann/Getty Images)

The family-friendly, controversy-averse Walt Disney Co. has walked into the buzz saw of the American culture wars, version 2022.

In April, officials at Disney objected to a Florida law prohibiting instruction in sexual orientation and gender identity in kindergarten through third grade. Florida Gov. Ron DeSantis responded by signing a bill revoking Disney’s self-governing status, a unique arrangement in which the company operated like an independent fiefdom within the state.

Traditionally, the custodians of one of Hollywood’s most reliable cash machines have been careful to sidestep political minefields that might remind customers of a realm outside the Magic Kingdom. Better to wallow with Scrooge McDuck in the Money Bin than be caught in the crosshairs of Fox News chyrons.

Only once before has the Disney brand gotten so entangled in a public relations briar patch – in 1941, when the original iteration of the company was confronted by an internal revolt that pitted the founding visionary against his pen-and-ink scriveners.

The characters in the showdown were as colorful as any drawn on the studio’s animation cels: union activists, gangsters, communists and anti-communists, and, not least, Walt Disney himself, who, dropping his avuncular persona, played a long game of political hardball and slow-burn payback.

Even then, Walt Disney inspired a special kind of awe around Hollywood.

Billy Wilkerson, editor of The Hollywood Reporter, declared Disney “the only real genius in this business” in the Dec. 17, 1937, issue of the periodical.

Disney was hailed as the father of the first sound cartoon, “Steamboat Willie” (1928); the first Technicolor cartoon, “Flowers and Trees” (1932); and the first feature-length cartoon, “Snow White and the Seven Dwarfs” (1937).

“Snow White” marked the beginning of the extraordinary creative streak – “Pinocchio” and “Fantasia” in 1940, “Dumbo” the following year and 1942’s “Bambi” – on which the Disney mythos would be built forever.

In 1940, Disney plowed the profits from “Snow White” into a state-of-the-art animation studio in Burbank, California, where the comfort of his workers, so he said, was a high priority.

“One of Walt Disney’s greatest wishes has always been that his employees could work in ideal surroundings,” read an advertisement in the Oct. 10, 1940, issue of The Hollywood Reporter. “The dean of animated cartoons realizes that a happy personnel turns out the best work.”

But even by the standards of exploitative Hollywood shop floors, Disney animators were overworked and underpaid. Forced to hunch over a drawing board for 10 hours a day, they had no desire to whistle while they worked. Instead, they wanted a strong union to negotiate on their behalf. Disney didn’t want any of it.

“Disney cartoonists make less than house painters,” charged the guild. “The girls are the lowest paid in the entire cartoon field. They earn from $16 to $20 a week, with very few earning as high as $22.50.” The guild demanded a 40-hour, five-day work week, severance pay, paid vacation and a minimum wage scale ranging from $18 a week for apprentices to $250 for cartoon directors.

To go nose-to-nose with Disney in the negotiations, the Screen Cartoonists Guild chose Herbert Sorrell of the Motion Picture Painters, Local 644, a longtime thorn in the side of studio management.

Sorrell was a broad-shouldered union man of the old-school variety. A former heavyweight prize fighter, he was not afraid to mix it up on the picket line with cops and strikebreakers.

Sorrell’s footwork in the boxing ring – not to mention the brass knuckles he carried – came in handy. In the 1930s, labor organizing in Hollywood could be more hazardous than stunt work. Many studio heads had already cut sweetheart deals with the mobbed-up trade unions, notably the International Alliance of Theatrical and Stage Employees, run by a Chicago-schooled gangster named Willie Bioff.

Animators Put Down Their Pens

On May 28, 1941, the Screen Cartoonists Guild called a strike, and hundreds of animators walked out on Disney. 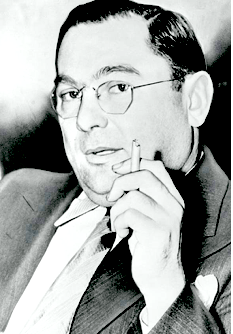 Disney preferred to negotiate with Willie Bioff, a mob-connected union leader who was cozy with management. (Bettmann/Getty Images)

“There are no strings on me!” exclaimed Pinocchio in one placard. The slogans were as clever as the visuals: “Snow White and 700 Dwarfs,” “3 Years College, 2 Years Art School, 5 Years Animation Equals 1 Hamburger Stand” and “Are We Mice or Men?”

Disney was enraged. He claimed that Sorrell had threatened to turn the Burbank studio into a “dust bowl” unless he caved to the strikers’ demands.

Behind the scenes, Disney offered the SCG a deal brokered by the gangster Willie Bioff.

Disney then placed ads in the trade press saying he had made generous offers to “your leaders” – that would be Bioff – and had acceded to most of the strikers’ demands.

“I am positively convinced that Communistic agitation, leadership and activities have brought about this strike, and has persuaded you to reject this fair and equitable settlement,” Disney said.

“Dear Walt,” Sorrell retorted, “Willie Bioff is not our leader. Present your terms to OUR elected leaders, so that they may be presented to us and there should be no difficulty in quickly settling our differences.”

Eventually, the feds, in the person of the National Labor Relations Board, intervened. On July 29, after 62 days of rage on both sides, Disney settled – through clenched teeth. Disney and the Screen Cartoonists Guild squabbled intermittently until the end of the year, but Sorrell had won on the big points: better wages, job security and a “closed shop,” which requires union membership as a condition for employment.

To Disney, though, this wasn’t just a dispute between management and labor. It was oedipal rebellion against the father in his own house.

In October 1947, Disney got his chance for revenge when he testified before the House Committee on Un-American Activities, which was investigating Hollywood for alleged communist subversion in motion picture content and within the ranks of organized labor.Disney was called as a friendly witness, and friendly he was: While waiting to testify, he good-naturedly sketched pictures of Donald Duck and Mickey Mouse for the children of the committee members. 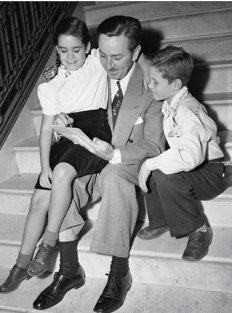 While waiting to testify before the House Un-American Activities Committee, Walt Disney draws for the daughter of the chief counsel for the committee and the son of a committee investigator. (Bettmann/Getty Images)

At the witness table, Disney emphasized that while today “everyone in my studio is 100% American,” the percentage had not always been so high. He named the name that had stuck in his craw since 1941. “A delegation of my boys, my artists, came to me and told me that Mr. Herbert Sorrell … was trying to take them over,” Disney said. Sorrell and his cohorts, charged Disney, “are communists,” though admittedly, “no one has any way of proving those things.”

Proven or not, Disney’s allegations were career-killers. Many of the activist cartoonists of 1941 fell victim to Hollywood’s notorious blacklist era, when hundreds of workers on both sides of the screen were rendered persona non grata at the studios for their political affinities.

As a result, the Screen Cartoonists Guild softened its tone. In 1952, it voted to become affiliated with the firmly anti-communist International Alliance of Theatrical and Stage Employees – Bioff’s former outfit. As for Sorrell, he was hounded by charges of communist sympathies and ultimately barred from a leadership position in his own union.

Disney, you know about. After venting before the House Committee on Un-American Activities, he navigated the company back to the 50-yard line of America’s culture wars. There the entertainment conglomerate stayed – until recently, when it wandered off Disney World into the swampland of Florida politics.

20 comments for “Disney Not in This Much Trouble Since 1941”