Amid Ukraine tensions, Matt Kennard provides an overview of the U.S. Air Force’s growing presence in the U.K. 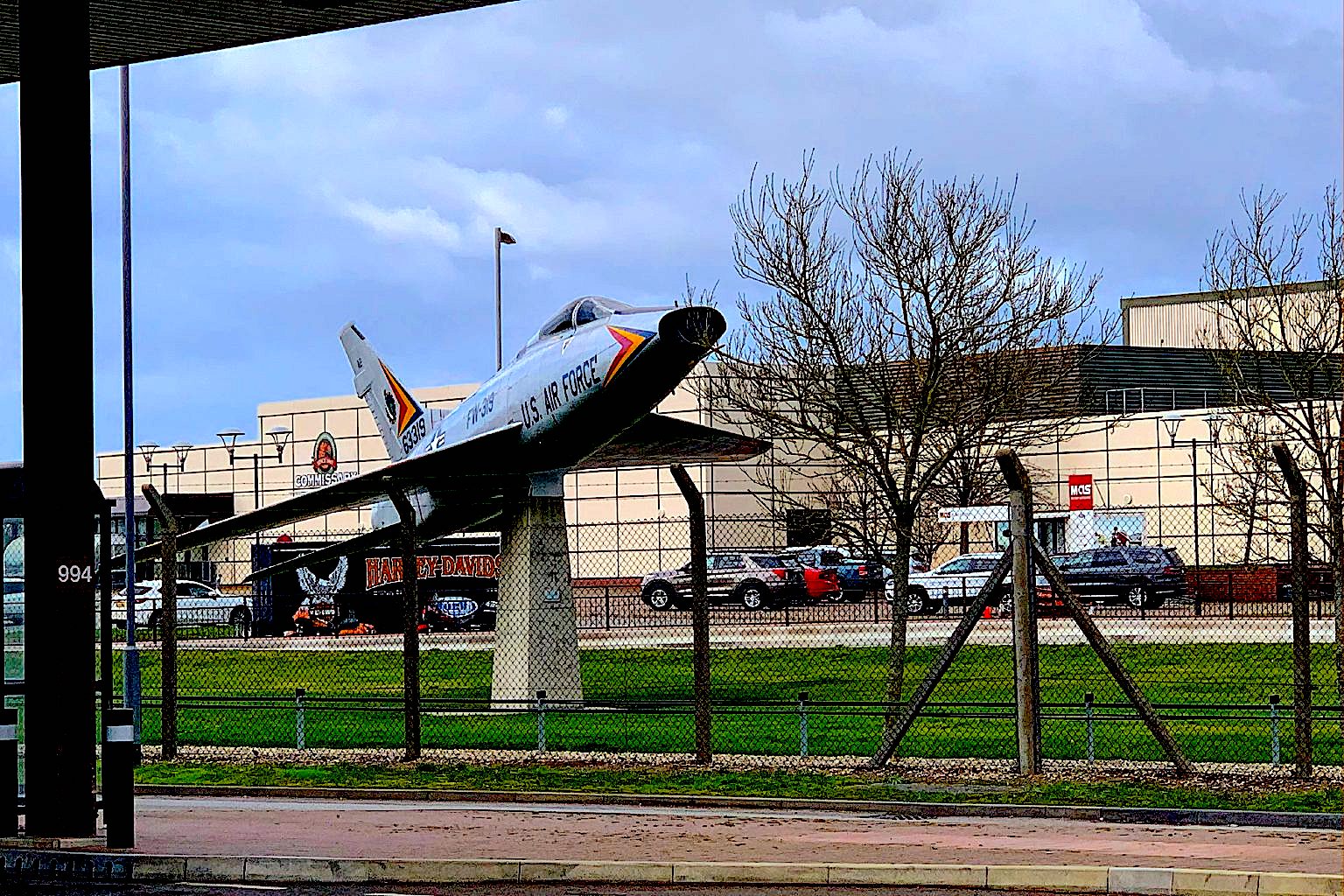 Entrance to RAF Lakenheath in Suffolk, the centre of the U.S. Air Force’s presence in Britain. (Matt Kennard/DCUK)

The U.S. Air Force (USAF) has 9,730 personnel permanently deployed throughout Britain, an increase of 22 percent from six years ago.

Analysis by Declassified has found that Britain hosts the third-highest level of USAF personnel of any country in the world, ahead of historic U.S. military outposts like South Korea and Italy.

These American airmen have in recent years flown bombing missions to Afghanistan, Iraq and Libya from their bases in Britain.

“The USAF presence in Britain isn’t just some remnant of the Cold War, it’s ongoing and very active,” Kate Hudson, chair of the Campaign for Nuclear Disarmament (CND), told Declassified.

In recent months, huge American B-52 nuclear-capable bombers have been seen leaving and arriving at a RAF base in Gloucestershire.

“The U.S. says they were on a training exercise to ensure they are ‘ready,’ presumably for war on Ukraine,” Hudson added. “Once again we have a situation where war or other military actions can be prosecuted from Britain without parliamentary scrutiny.”

The latest figures, correct for September 2021, show that 9,074 active-duty U.S. airmen are currently deployed in the U.K., together with 113 personnel from the USAF Reserves and a member of the USAF National Guard. Supporting them are 542 USAF civilian personnel. 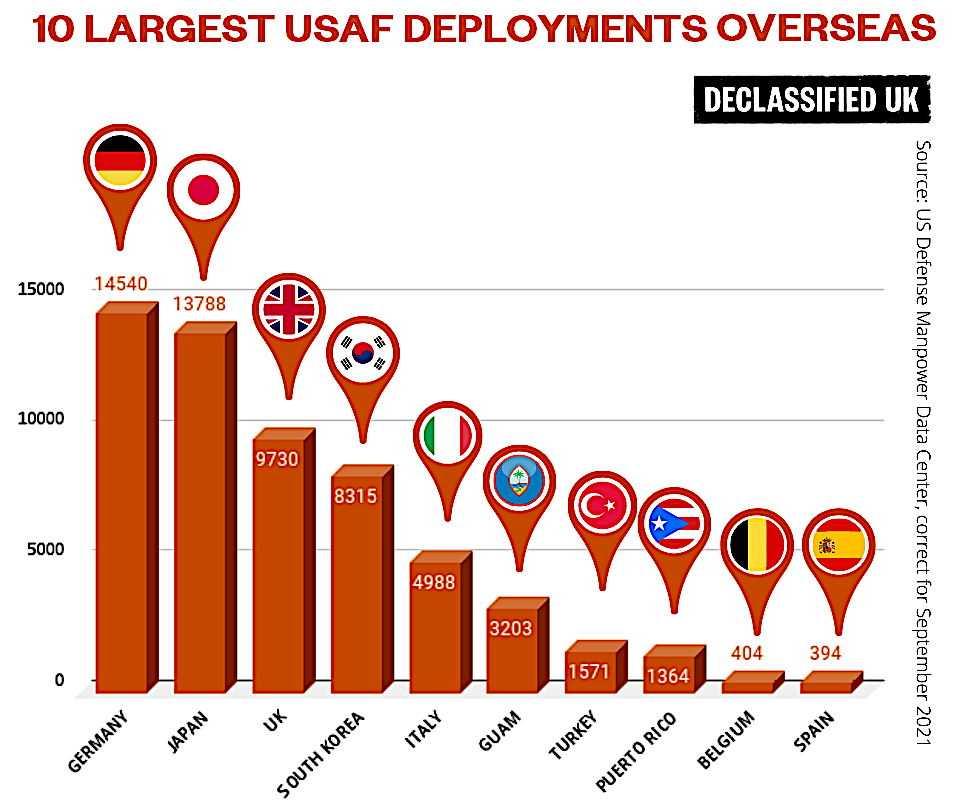 The British deployment is the third-largest in the world. The only countries which host more USAF personnel are Germany with 14,540 and Japan with 13,788. Both countries were occupied by the U.S. military after being defeated in 1945.

Germany hosts the Ramstein Air Base, just outside Kaiserslautern in the southwest, which is home to the USAF’s Europe and Africa Commands. Meanwhile, Japan’s Kadena Air Base at Okinawa hosts the 18th Wing, the USAF’s largest combat wing.

The fourth-largest deployment, after the U.K., is South Korea, which was occupied by the U.S. following the end of the Korean War in the 1950s. The mission of the 8,315 USAF personnel there is to “deter, protect and defend the Republic of Korea from attack from North Korea.”

There are more active-duty USAF personnel in Britain than in 40 of the U.S.’s own States. This includes Maryland, which hosts Joint Base Andrews, home to Air Force One and known as “America’s Airfield.”

The latest data comes from the Defense Manpower Data Center, a department of the Pentagon. It does not include the number of USAF personnel in Britain on temporary duty or deployed in support of contingency operations, which could be significant. 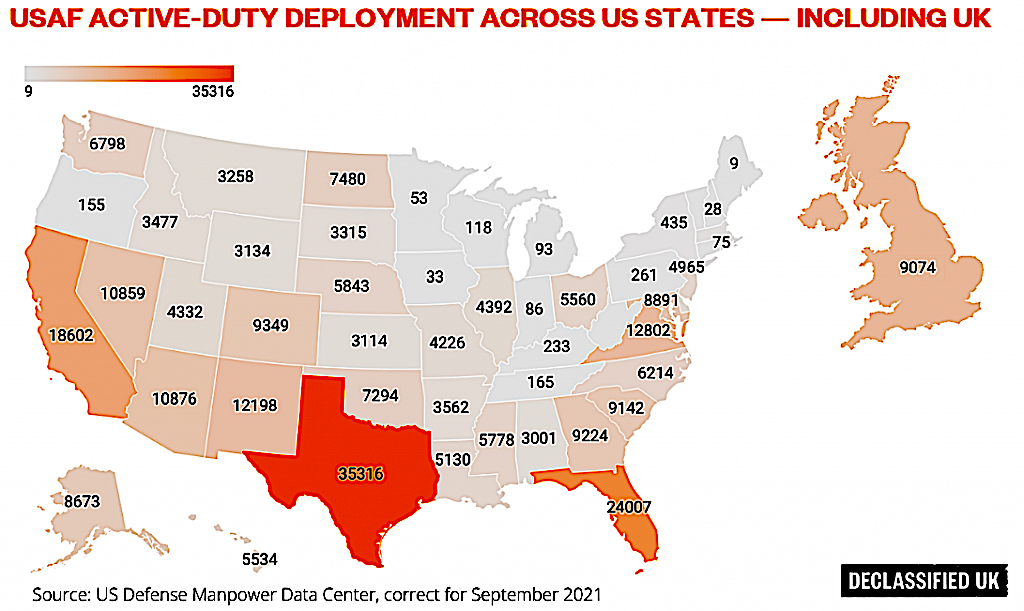 U.S. military personnel in Britain are all in England, with access to 11 Royal Air Force (RAF) bases, stretching from Cambridgeshire to Yorkshire. They are known officially as United States Visiting Forces (USVF).

Altogether there were 12,147 U.S. military personnel in Britain in March 2022. A further 150 Americans are deployed with NATO, the majority at its intelligence centre at RAF Molesworth in Cambridgeshire.

The U.S. military has 100 personnel based in London, including 52 inside the American embassy, and 135 people deployed at multiple undisclosed locations across the U.K.

The largest U.S. military presence is at RAF Lakenheath, a 727 hectare site in Suffolk. Despite being called an RAF base, it is leased to the USAF, and its population is overwhelmingly American.

There were 5,404 U.S. Department of Defense personnel based there in March.

A nondescript village with a population of 5,000 people, Lakenheath directly abuts the U.S. base and has a clear American influence. The Turkish barber proudly displays the Stars and Stripes alongside the Union Jack on its shop front. The Volvo car dealership on the outskirts sells only to U.S. military personnel.

In the Co-Op on the quiet High Street, Klara, 24, is stacking shelves. She followed her boyfriend, an engineer, to Lakenheath a year ago after he found work nearby.

“It has been quite weird at times, because obviously there’s a lot of people moving in and out throughout the year,” she tells me. “Especially working in the shop, I do see a lot of new faces for such a small village.” She adds, “There’s a lot of Americans coming in.”

Klara says the U.S. aircraft have become more frequent in recent months. “When I first moved here, they used to fly every three hours, just five or six planes at once, but recently, the past two or three months, they’ve been flying quite a few every few hours, so it’s got more over the months.” She adds, “With the planes it does get loud sometimes.”

Klara says she’s heard people complaining about the noises from the planes. “You don’t hear about it every day but you can tell people do get quite bothered by it.”

Does she have any security fears about living next to a USAF base? “Personally I do think about it. If war does happen, we are kind of like the target aren’t we, with the base right there, so yeah it is a bit scary sometimes, if you actually properly think about it.” 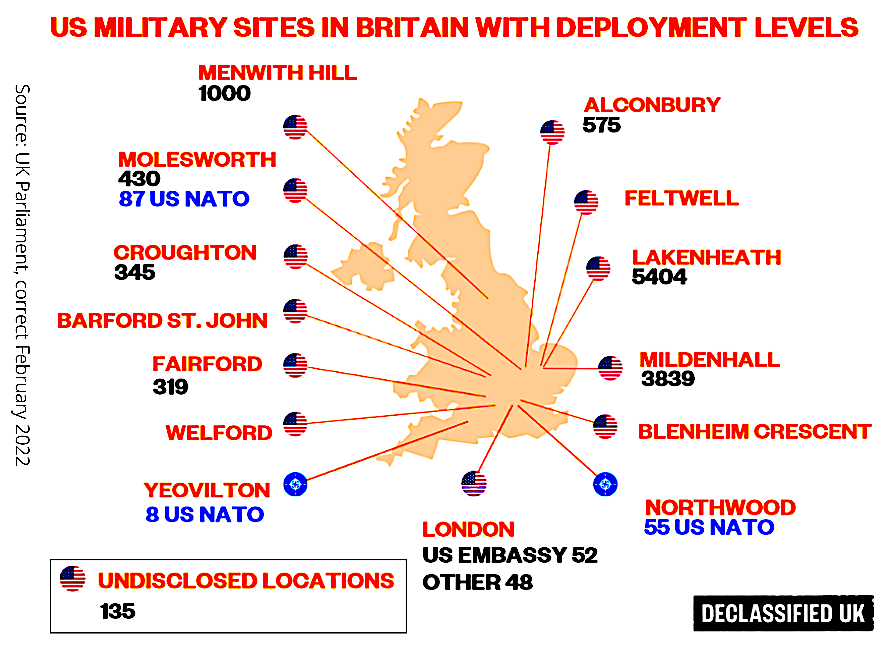 RAF Lakenheath is home of the 48th Fighter Wing, the USAF’s only F-15 fighter wing in Europe.

Produced by Boeing, the F-15 was built at the request of the USAF and has long been its primary fighter jet. Flying since the 1970s, it is also used by Israel and Saudi Arabia, among others.

The U.S. military notes that the 48th Wing “has been the foundation of [USAF-Europe]’s combat capability and remains so today.” Also known as the “Liberty Wing,” it has further units at nearby RAF Feltwell, and is the “largest U.S. fighter operation in Europe.”

Its commander is Colonel Jason A. Camilletti, a veteran of the Iraq war, who says he manages 6,400 personnel and $5.6 billion in assets in the U.K., including 75 fighter jets and 600 buildings.

In 2015, the U.S. military announced that its first basing of the fifth-generation F-35 fighter jet in Europe would be at RAF Lakenheath. “This decision reflects the closeness of the U.S.-U.K. defense relationship and the military value of basing in the UK,” it said.

Produced by Lockheed Martin, the F-35 is described as “the most lethal, survivable and connected fighter aircraft in the world.”

In December, the first F-35 arrived at RAF Lakenheath. This number will eventually reach 24.

Upon arrival, Lt. Col. Ian McLaughlin, commander of the 495 Fighter Squadron, to which the F-35 aircraft will belong, said his unit will “be vital to determining the fate of our adversaries in the battlespace.”

Last month, US government budget documents revealed that nuclear weapon storage vaults at RAF Lakenheath were being upgraded. The base had hosted U.S. nuclear weapons for more than five decades, after first arriving in 1954, before their removal in 2008.

‘Drive on the Left’

Outside the pretty medieval church on Lakenheath’s High Street, I talk to Sarah Smith, 53, who was born and grew up in the village.

She tells me there are good and bad points to living next to the U.K.’s largest USAF base.

The U.S. personnel, she says, “for the most part, they are lovely, polite people,” adding, “the good thing is that there’s diversity and most Americans are just so nice.”

But there are significant downsides. “The rental prices are absolutely sky high because the Air Force gets a housing allowance which can be two or three thousand a month, so obviously if you’ve got a two-bedroom bungalow, why let it to an English person for £800 a month when you get two thousand from an American?”

Sarah adds that many U.S. personnel live off-base. “There is housing there but I think there’s between eight to ten thousand American military families and contractors so I would say probably about a third of people who live in Lakenheath are American … so the rental market is just through the roof.”

She adds another negative. “Americans can’t drive very well on the roads. Apart from driving skills, it’s because a lot of them bring over their American cars, which are left-hand drive, so that can be awkward.”

A road sign for cars exiting RAF Lakenheath reminds drivers to “Drive On The Left.” The issue has been on the national agenda since 2019 when 19-year-old Harry Dunn was killed by the wife of a CIA officer driving on the wrong side of the road near RAF Croughton, another U.S.-leased base in Northamptonshire.

The U.S. helped the driver, Anne Sacoolas, leave the country soon after and later said she had diplomatic immunity for the alleged crime. 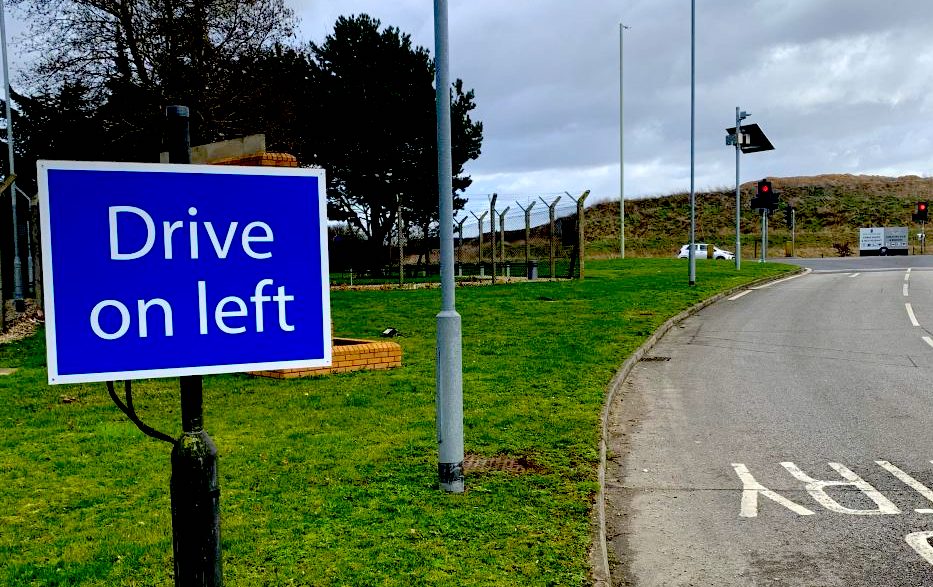 U.S. personnel are reminded to drive on the left as they leave RAF Lakenheath in Suffolk. (Matt Kennard/DCUK)

As well as being a CIA base, RAF Croughton is a USAF communications station and accounts for 25 percent of all military communications from Europe back to the U.S.

The U.S. is currently spending billions of pounds upgrading air bases in the U.K. to enable Washington to intercept international communications and launch military strikes from Britain more quickly.

Some of the locations are hubs for offensive bombing missions. RAF Fairford in Gloucestershire is the USAF’s only bomber Forward Operating Location, or military base, in Europe.

The aircraft deployed there “enable US and Nato warfighters to conduct a full spectrum of flying operations.” Made available by the British government, it was used by US bombers during the war in Iraq in 2003.

But the U.K. appears to have very little control over what happens on the USAF operated bases or the missions that are flown from them.

The overarching framework for the stationing of U.S. forces in the U.K. comes from two pieces of legislation. In 1951, NATO agreed a Status of Forces Agreement to govern hosting arrangements between its member states. The following year, The Visiting Forces Act incorporated the NATO agreement into U.K. law.

But Kate Hudson says that these agreements “ultimately reserve jurisdiction of U.S. personnel to the U.S.”

Most of the American bases are called RAF stations and leased by the U.S. “Because of this, while the physical buildings comprising the bases are usually the property of the UK Ministry of Defence, very little of what happens in them is controlled by the British government,” Hudson said.

It is also difficult for the British public to know what is happening on these bases, Hudson argues. “The MoD has strengthened the military by-laws which apply to RAF bases, making them so stringent that activities such as taking photographs and failing to collect dog waste from near the bases can be criminal offences.”

Hudson added: “British control of these bases remains negligible, and public insight into their activities remains severely curtailed. Despite operating on U.K. territory, these bases are firmly under American control. This situation needs to change and Britain’s status as the U.S.’s ‘unsinkable aircraft carrier’ has to end.”

The MoD has said that “any U.S. operation from a base in the U.K. is considered on a case by case basis, and this includes the legal basis for any proposed activity.”

It added that “use of a base in the UK is permitted based on any proposed activity being in accordance with UK law and the UK’s interpretation of relevant international law.”

Matt Kennard is head of investigations, and Mark Curtis is editor, at Declassified UK (@DeclassifiedUK), an investigative journalism organisation focused on UK foreign, military and intelligence policies. They tweet at @DCKennard and @MarkCurtis30.