PayPal has retreated after a deluge of support for Consortium News by unfreezing its funds and now saying unspecified steps must be taken to restore the “permanently” shut down account, Joe Lauria reports.

PayPal has reversed its decision to withhold Consortium News‘ funds after a backlash from social media, news outlets and CN donors.

PayPal sent Consortium News an email on Tuesday night saying: “Your PayPal funds are now eligible for withdrawal.” CN immediately withdrew the funds.  PayPal gave no reasons for its reversal, as it had given no reasons for its initial action. The account remains shut down, though it appears no longer permanently, as PayPal is asking CN to take steps to restore it without saying what those steps are.

PayPal initially said it had slapped a “permanent limitation” on Consortium News, adding explicitly: “You can’t use PayPal anymore. … We noticed activity in your account that’s inconsistent with our User Agreement and we no longer offer you PayPal services. … Because of potential risk exposure, we’ve permanently limited your account. You’ll no longer be able to use the account for any transactions.”

Among “restricted activities” in the User Agreement is a ban on providing “false, inaccurate or misleading information” to PayPal, other PayPal customers “or third parties.” Given the political climate it is reasonable to conclude that PayPal was reacting to Consortium News’ coverage of the war in Ukraine, which is not in line with the dominant narrative that is being increasingly enforced. If true, PayPal was allegedly seeking to limit Consortium News’ free speech by depriving it of one of its main vehicles for funding.

A PayPal customer service agent had told CN that its funds could be kept for six months until a determination was made about what to do with them. “If there was a violation .. it is possible” CN‘s balance of $9,348.14 could be kept as “damages” to PayPal. That would mean awarding itself damages in a completely secret process.

PayPal apparently has also lifted the “permanent limitation” on CN‘s account. According to its User Agreement, PayPal says there are no steps that can be taken to reverse the permanent ban. (Click to enlarge).

But in the Tuesday night email PayPal said there were now steps Consortium News could take. “Access to your account will remain limited until you perform the steps required to lift the limitation.” However, it failed to specify what those steps are and still hasn’t identified what violations were committed to bring the ban in the first place. 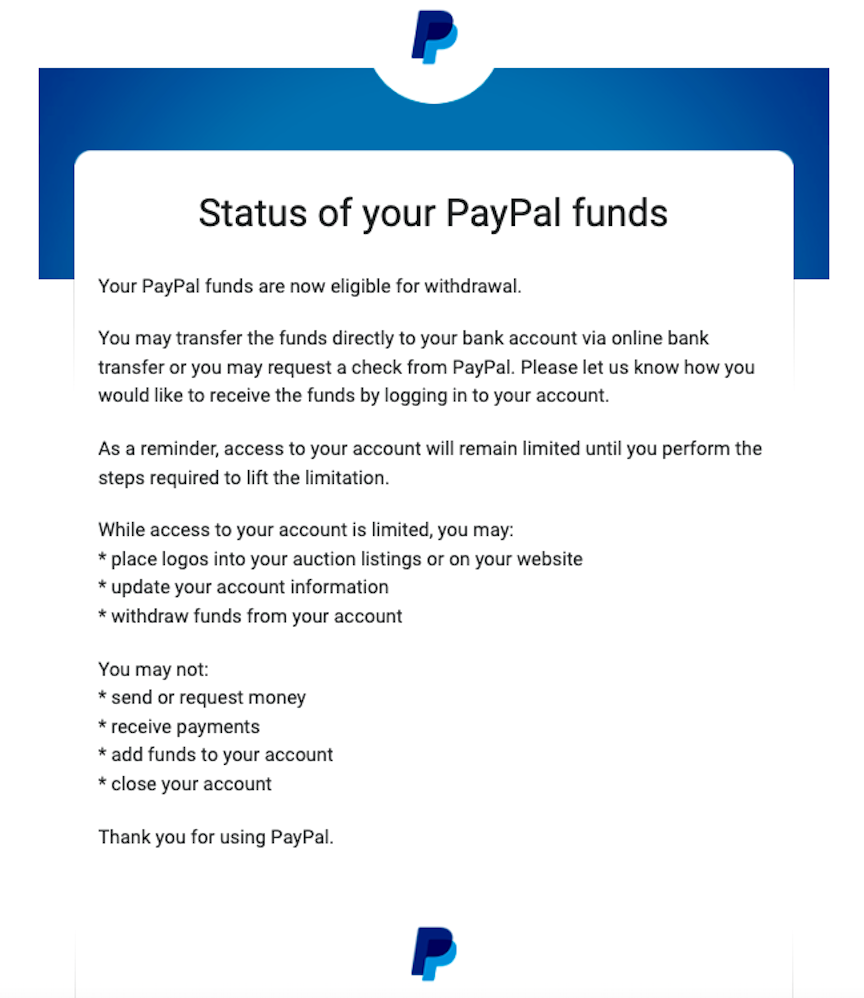 PayPal’s reversal comes after widespread support on social media for Consortium News and a flood of donations that sent a message to PayPal. CN received $25,354 in donations in the 48-hour period after it announced PayPal’s ban, with $15,632 coming on the first day. They are both record amounts, for which Consortium News is extremely grateful. (Please keep helping us reach our $60,000 Spring Fund Drive goal.)

Independent media reacted too, with an article by Matt Taibbi on Substack, one by Jacobin magazine and a report on DemocracyNow! The story also hit the mainstream in this segment on The Hills‘ show Rising, which also discuss MintPress News, which was also shut down, having its funding restored as well:

PayPal may well have reacted to the growing media coverage, as well as to the outrage generated on Twitter, with many people saying they were canceling their PayPal accounts.  Here were some of the reactions:

Not content just censoring independent media outlets, they're now being blocked on PayPal

Journalists who criticize US imperialism are in danger of having our livelihoods taken from ushttps://t.co/ibuFv8vJtf

PayPal Cancels Consortium News Account; May Seize Balance. The McCarthyites at PayPal are at it again. https://t.co/IXGwv69Via

Look at this bullshit. Consortium News is one of the most important outlets covering the Empire. Great covering of Ukraine, Assange and so much more. https://t.co/t0TTmdT5Sp

The US-UK national security state – and allied multinationals – see independent media as a strategic hindrance. They already own the mainstream media. Now they want all unofficial narratives erased.https://t.co/hAC1NllgB7

If you didn't know what Consortium News was before, now you do, and you should probably go check them out.
https://t.co/S0bIo94UD8

This is completely outrageous, and true political #censorship Consortium News @Consortiumnews founded by the late, great Robert Parry, has been and sill is one of the most honest, principled sources of information and analysis in the world. https://t.co/UetX2gAtie 1/4

You have got to be kidding me.

Hey @elonmusk, you want to talk about suppression of free speech?! Look at what your former company is doing to some of the best journalists in America!https://t.co/eneCUqxb0n

The #Ukraine war is being used as cover for a censorship operation.
“It is more than conceivable that PayPal is reacting to Consortium News’ coverage of the war in Ukraine, which is not in line with the dominant narrative.”#freepress #freespeech @unjoe https://t.co/GsjH1XrWGe

Here is another example of Paypal limiting freedom of speech, and this time actually withholding funds already in the account. Isn't this not just un American, but maybe not legal either? https://t.co/ew6QaOiJxl

← Chris Hedges: The Age of Self-Delusion
UKRAINE: Czech Progressives Oppose US Military Base →