The Consortium News editor-in-chief covered Madeleine Albright, who died on March 23, on a daily basis between 1993 and 1997 when she was the U.S. ambassador to the U.N. Here are some of his recollections. 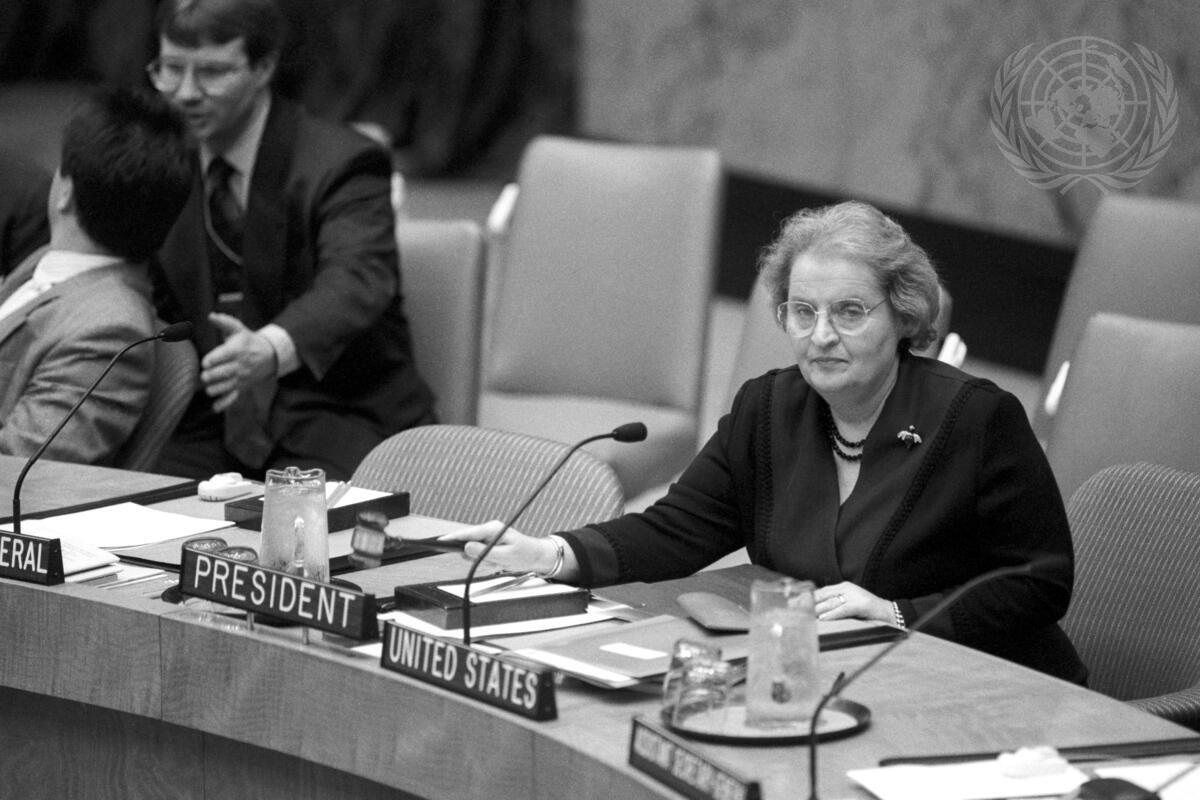 Every ambassador who represents the United States at the United Nations is arguably regarded by default as the most powerful person at the U.N. It has nothing to do with the individual qualities of the American diplomat, but of the pre-eminent position the U.S. plays in the world and at the U.N.

As a correspondent based at U.N. Headquarters in New York for a quarter century from 1990 to 2015, I covered every U.S. ambassador, from the career civil servant Thomas Pickering, to the right-wing ideologue John Bolton, to the liberal interventionist Samatha Power to Madeleine Albright, who died last month and was memorialized on Wednesday.

All of them to one degree or another used U.S. clout at the U.N. to push America’s aggressive foreign policy in the world. Albright was among the most aggressive. She was in the forefront of America’s push for war in the Balkans and continued aggression on Iraq. 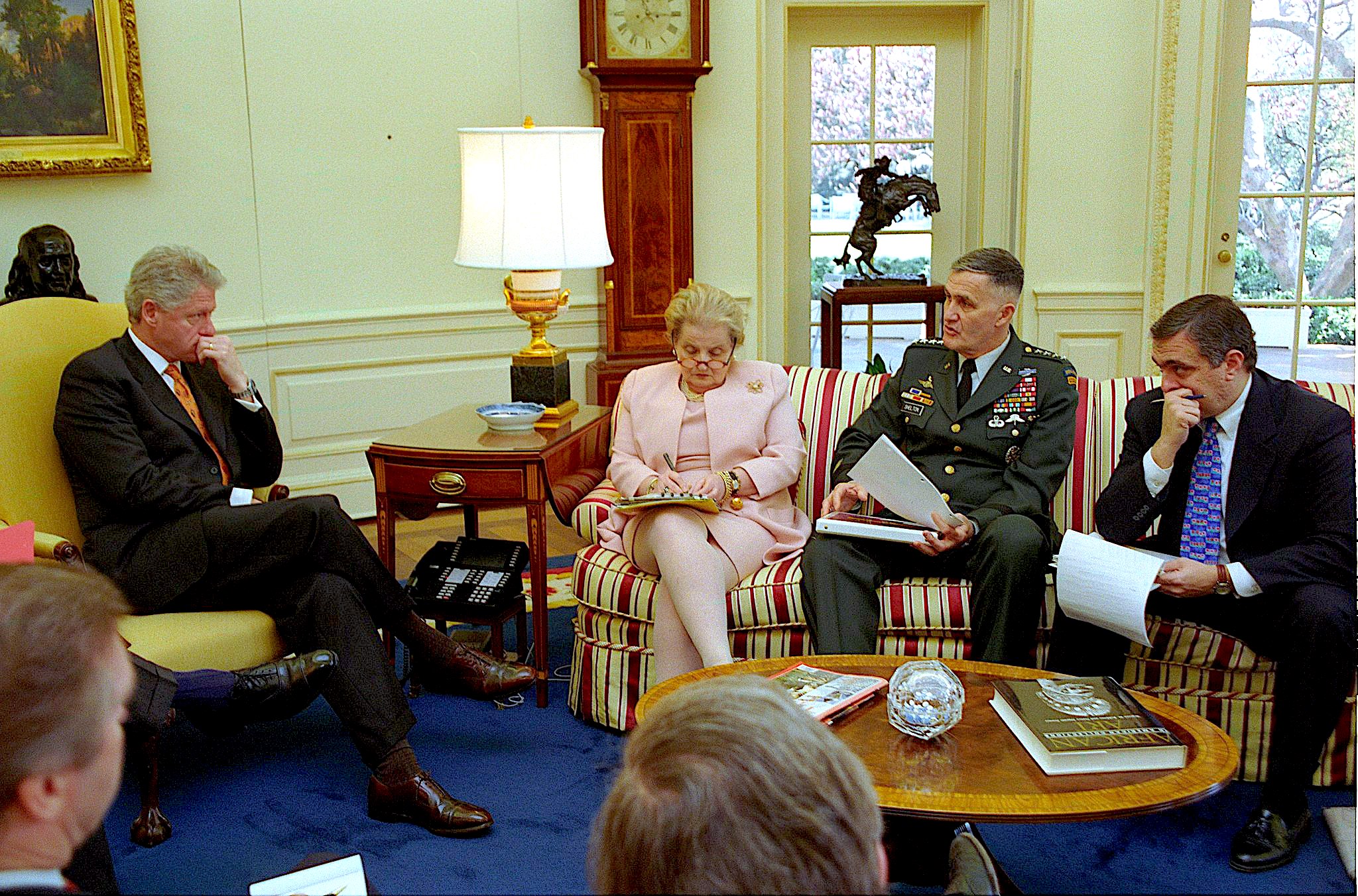 She did not have the best reputation, even among America’s U.N. allies. A European diplomat, at a background briefing with reporters that I attended, once called her an “intellectual lightweight.” That was supposed to stay in the room, but within hours I heard it circulating in the U.N. corridors. I would be surprised if it didn’t get back to Albright.  It had to bite because she tried to cultivate her image as a smart, tough woman, as smart and tough as any male diplomat.

She also tried to cultivate the press to project that image. She and her spokesman, Jamie Rubin, who later followed her to the State Department, would invite three or four reporters, including me, out for drinks at a Manhattan bar near the U.N.  We were invited to parties at Rubin’s apartment, where she would appear. She developed a superficial friendliness to keep the press on side. (Reporters who were not seen as friendly could be subjected to tongue lashings by Rubin in front of other reporters at the Security Council press stakeout.)

One day this friendliness seemed to go too far.  I was walking down the corridor of the Conference Building, which connects the Security Council chamber with the General Assembly Building, with its huge floor to ceiling windows yielding a spectacular view of the Manhattan skyline. I saw Albright approaching in the opposite direction with Rubin. As we drew closer she caught my eye.

And then she winked at me.

I had no idea how to respond or what that meant. If that were a male U.S. ambassador winking at a female reporter what would people make of it today?

Albright caused eyebrows to raise too. There was hardly anyone at the U.N. I knew — diplomats, journalists and U.N. officials — who were not appalled by the answer she gave to Leslie Stahl of CBS’ 60 Minutes program, saying it was “worth it” to kill half a million Iraqi children.

She was particularly despised by Serbian diplomats and journalists at the U.N. for her perceived role in allowing the ethnic cleansing of 200,000 Serbs from Croatia in 1995. At the time, The New York Times reported that “Madeleine K. Albright, the United States representative to the United Nations, [argued] that a Croatian attack probably could not be stopped, and might bring some benefits.”

In this video, Albright’s car is stoned by Serbs during a visit a year later to Eastern Slavonia in Croatia, where many Serbs had been expelled from. After the deed was done, Albright says the remaining Serbs should stay because the U.S. wanted it to be a “multi-ethnic” area.

Albright is credited with helping to persuade President Bill Clinton to bomb Serbia during the Kosovo crisis in 1999. At the Rambouillet conference in 1999 Albright threatened Serbia with war if it didn’t agree to let Kosovo go. For her support of the criminal Kosovo Liberation Army and its leader, Hashim Thaci, the Serbs spread ugly rumors at the U.N. that Albright was having an affair with him.

“She will be remembered in Serbia as a ruthless woman, one of the loudest advocates of the bombing of Yugoslavia and the independence of Kosovo,” the Serbian pro-government Vecernje Novosti newspaper said after her death. In Kosovo she was greeted in June 1999 with shouts of “Mother! Mother!”

Her hatred for the Serbs appears to have been mutual.  At this book signing she calls hecklers “disgusting Serbs.”

Probably her biggest enemy at the U.N. was the then secretary-general, the late Boutros Boutros-Ghali. They crossed swords on numerous occasions. American ambassadors are used to being listened to when they enter the SG’s office on the 38th floor. But the seasoned Egyptian diplomat had his own mind and he let her know it.  The two clashed over U.S. policy and the U.N. role in the vicious civil wars in Somalia, Rwanda and Bosnia.

In his memoir, Unvanquished: A US-UN Saga,” Boutros-Ghali calls Albright “an amateur,” and “unskilled” in diplomacy, with her “brutal” style falsely portrayed as candor.

In 1996, TIME magazine reported that “Washington never gave Boutros–Ghali much of a chance”:

In his memoir, Boutros-Ghali writes that Albright displayed the same false friendliness to him [as she did to the press.] Former State Department official and U.N. protocol chief Joseph Verner Reed told him he heard her say, “I will make Boutros think I am his friend; then I will break his legs.”

“She had carried out her campaign with determination, letting pass no opportunity to demolish my authority and tarnish my image, all the while showing a serene face, wearing a friendly smile, and repeating expressions of friendship and admiration.  I recalled what a Hindu scholar once said to me: there is no difference between diplomacy and deception.”

In the immediate aftermath of the fall of the Soviet Union, there was great promise for the U.N., which had finally escaped the Cold War deadlock between the West and the U.S.S.R. But Boutros-Ghali made clear that instead of seeking a new international cooperation, the U.S. in this period was exercising its unilateralist muscle as the “sole superpower,” and Albright bore this pointed message to the U.N.  He wrote:

“Coming from a developing country, I was trained extensively in international law and diplomacy and mistakenly assumed that the great powers, especially the United States, also trained their representatives in diplomacy and accepted the value of it. But the Roman Empire had no need for diplomacy. Nor does the United States. Diplomacy is perceived by an imperial power as a waste of time and prestige and a sign of weakness.”

The result in November 1995 was that while 14 members of the U.N. Security Council voted to give Boutros-Ghali a second term, one did not. The U.S. vetoed him.  Here Albright hides behind the excuse that Boutros-Ghali did not “reform” the U.N., that is, cut programs popular in developing countries, whose opposition to the U.S. veto is expressed by these African leaders:

I had two interactions with Albright after she left the Clinton administration, where she served as the first female secretary of state. I was working on a profile in 2013 for The Wall Street Journal about Susan Rice, the then U.S. ambassador to the U.N., and Albright agreed to a telephone interview that lasted about half an hour. I focused most of it on the U.S. failure to act on a U.N. request to send peacekeepers to Rwanda to prevent the 1994 genocide there.

Rice, at the time on Clinton’s National Security Council, reportedly said, “If we use the word ‘genocide‘ and are seen as doing nothing, what will be the effect on the November election?”  Albright defended Rice for whom she was a mentor but frankly admitted the guilt the U.S. felt for its inaction in Rwanda.

The last time I saw Albright was on a return visit she made to the U.N. around 2014.  She met with a few reporters in a small U.N. conference room. I sat across from her. She had a young female aide with her.

Albright repeatedly snapped at her. At one point when she wanted her water glass filled, the feminist champion who later said there was a place in hell for women who didn’t support Hillary Clinton for president, glared at the young woman. Without saying a word, she haughtily pointed at the glass.

It was “brutal,” as Boutros Boutros-Ghali would say.

← The Sword & the Cross at Albright’s Funeral
CAITLIN JOHNSTONE: Being Anti-War Isn’t Easy →

43 comments for “The Madeleine Albright I Knew”