Liberals once mocked the Bush–Cheney regime’s with-us-or-against-us routines. Now the trans–Atlantic foreign policy cliques have no capacity to see the world differently. 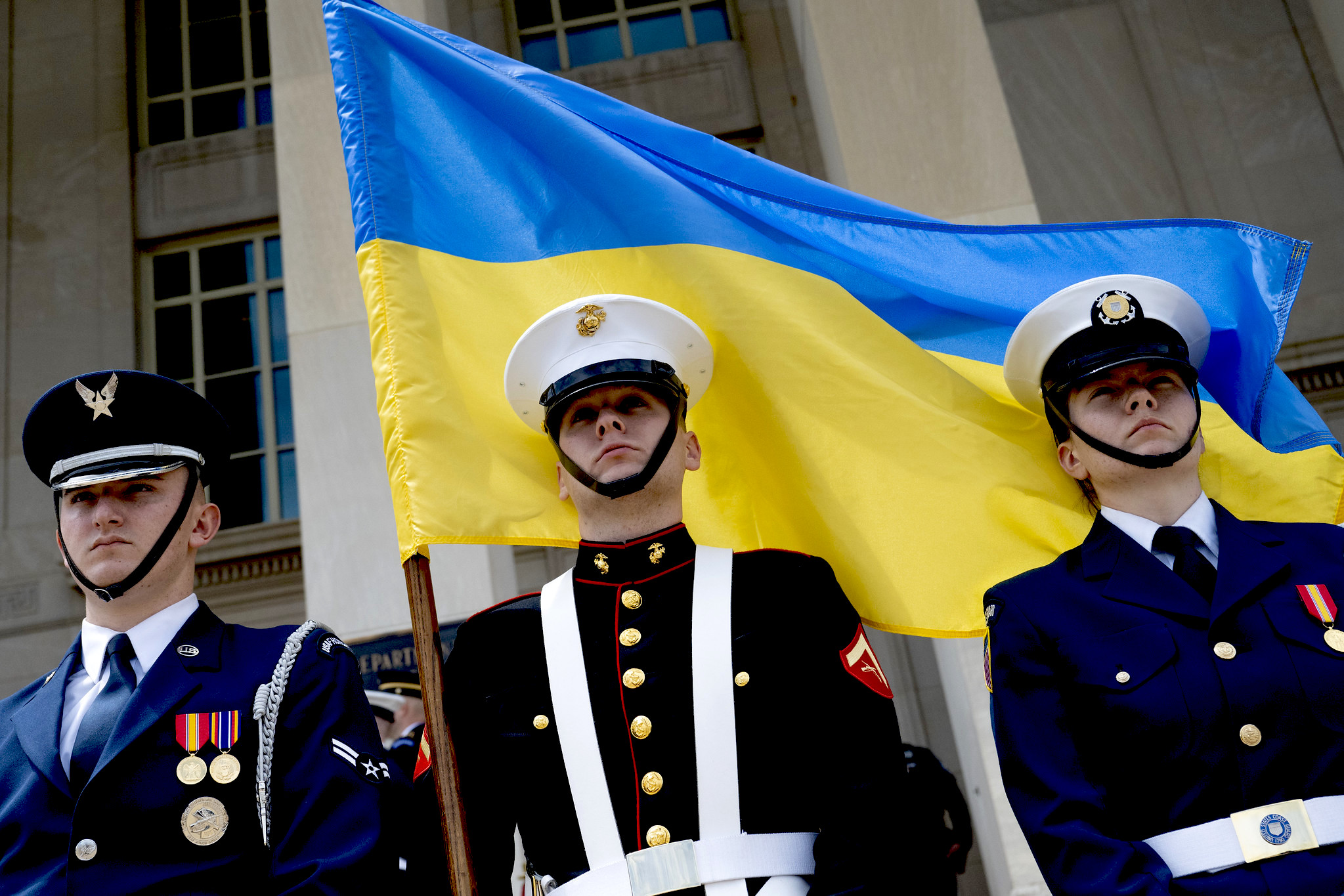 I was interested to read, last December, of the expansive agreements Vladimir Putin and Mahendra Modi signed at the conclusion of a summit the Russian and Indian leaders held in New Delhi. These came to 28 and covered all manner of things — defense cooperation, energy projects, production sharing, technology transfers, investments in a range of industrial sectors India is eager to develop.

The two leaders were very clear this was about more than rubles and rupees. Putin: “The ties are growing and I’m looking into the future.” Modi: “A lot of geopolitical equations have emerged, but India–Russia friendship has been a constant.”

Here’s the thing about those numerous rounds of cabinet-level talks and the summit that capped them: By Monday, Dec. 6, when the Russian president and the Indian prime minister smiled for the cameras, Washington and its NATO allies were busily provoking Russia’s intervention in Ukraine and insisting the world line up against the evildoing Russian Federation.

Nobody outdoes the Indians when it comes to nonalignment.

Also interesting reading was Lloyd Austin’s testimony to the U.S. House Armed Services Committee on April 6, wherein the defense secretary explained that those damnable Indians were going to have to ditch their defense ties to Russia. “We continue to work with them to ensure that they understand that it’s not in their — we believe that — it’s not in their best interest to continue to invest in Russian equipment,” he said.

The biggest pebble in the Pentagon’s shoe is India’s agreement to purchase the Russian-made S–400 missile-defense system, which must be some piece of gear considering that Washington is unfailingly inflamed whenever anybody buys it.

“And our requirement going forward,” Austin continued, “is that they downscale the types of equipment that they’re investing in and look to invest more in the types of things that will make us continue to be compatible.”

I just love that last bit: Our requirement. You have to sound tough up on Capitol Hill, I suppose.

Now I’m interested to read — so many interesting things in the papers these days, providing you read beyond the American dailies — that Ursula von der Leyen spent two days in New Delhi this week. The dull, ineffectual president of the European Commission was peddling two items: European weaponry — surprise, surprise — and Western sanctions against Russia. Apart from the material agreements New Delhi and Moscow signed in December, the Modi government has declined to condemn the Russian intervention in Ukraine and is not participating in the sanctions regime. 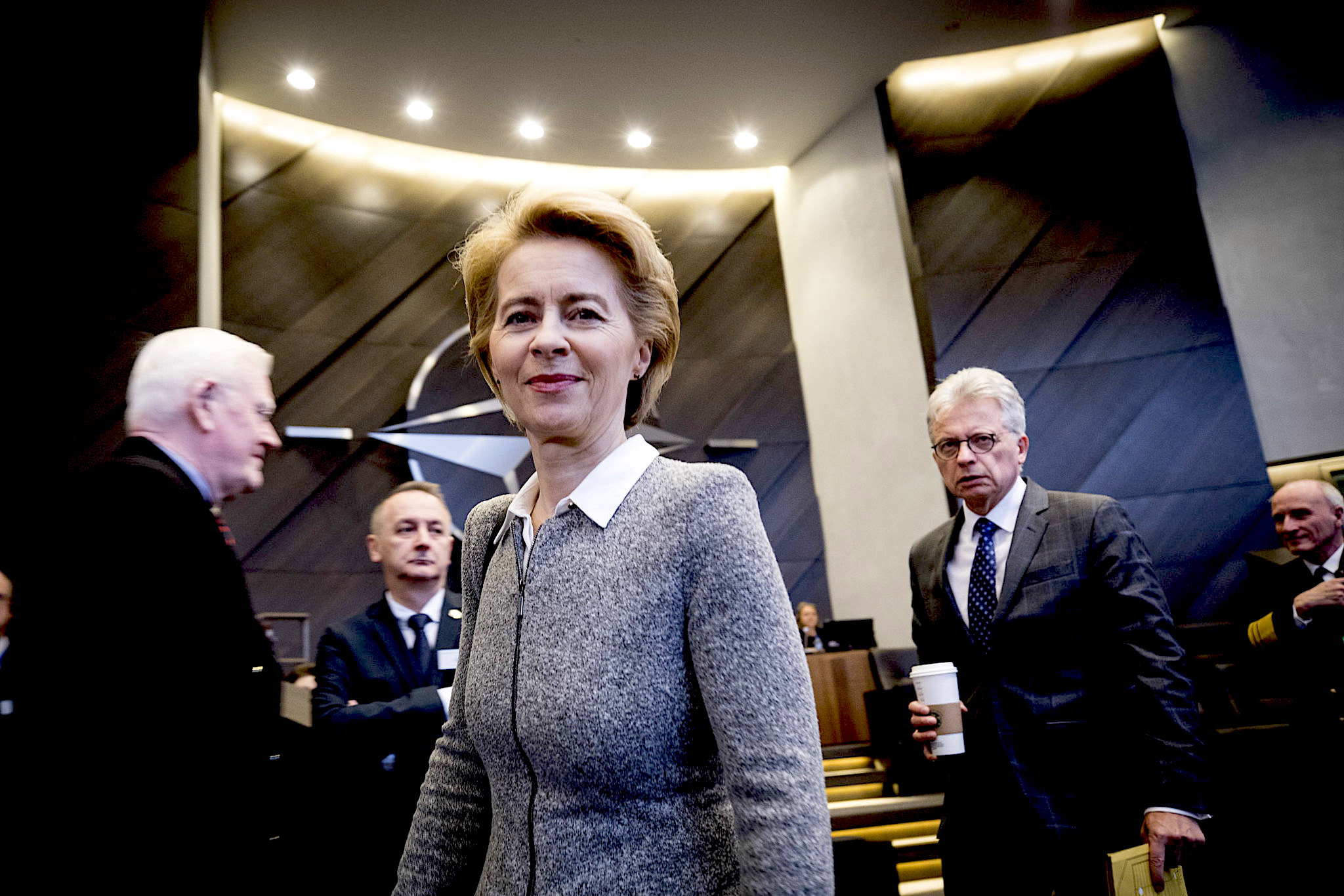 What are we looking at here? Two matters are worth noting.

One, the Biden administration can pound all it wishes with its rhetoric to the effect that the whole world is horrified by Russia’s “special operation” in Ukraine. We have all seen the maps: Most of the world isn’t. Subscribers to the sanctions and the shrieks of horror are by and large limited to the Western democracies.

The long-term effect of this bifurcation will be the West’s increasing alienation from the vast majority of humanity, otherwise known as the non–West. In time this will turn out to be big. Corollary: Those of us, myself included, who have longed over many years to see Europe act as an independent pole of power, in effect a mediator between West and non–West, can forget about it.

The current generation of European leaders including Emmanuel Macron, the poseur Gaullist just reelected to the French presidency, simply don’t have it in them to stand on their own two feet.

Two, the non–West’s impulse to return to the principles of nonalignment so brilliantly articulated by the charismatic leaders of the “independence era,” the 1950s and 1960s, has been evident for some time. But the Ukraine crisis appears to be infusing this welcome trend with a distinct electrical charge. Again, big stuff as we look out front just a little beyond our noses.

China and Russia appear to have understood from the first that the Ukraine crisis would affect the geopolitical maps in these two ways. Their joint statement on Feb. 4, the eve of the Beijing Olympics and slightly more than two weeks before Russia began its intervention, was a not-very-veiled rejection of the West’s claim to global hegemony and an invitation to begin constructing a new world order based on principles Western nations profess but pay no mind to.

If nonalignment is the emergent drift in global politics and policy, India is logically prominent among the battlegrounds where the fight is engaged. India is big and populous. It is influential among non–Western nations. And Washington has long entertained ridiculous fantasies to the effect that it can pull New Delhi decisively into the Western camp against Russia and China alike. 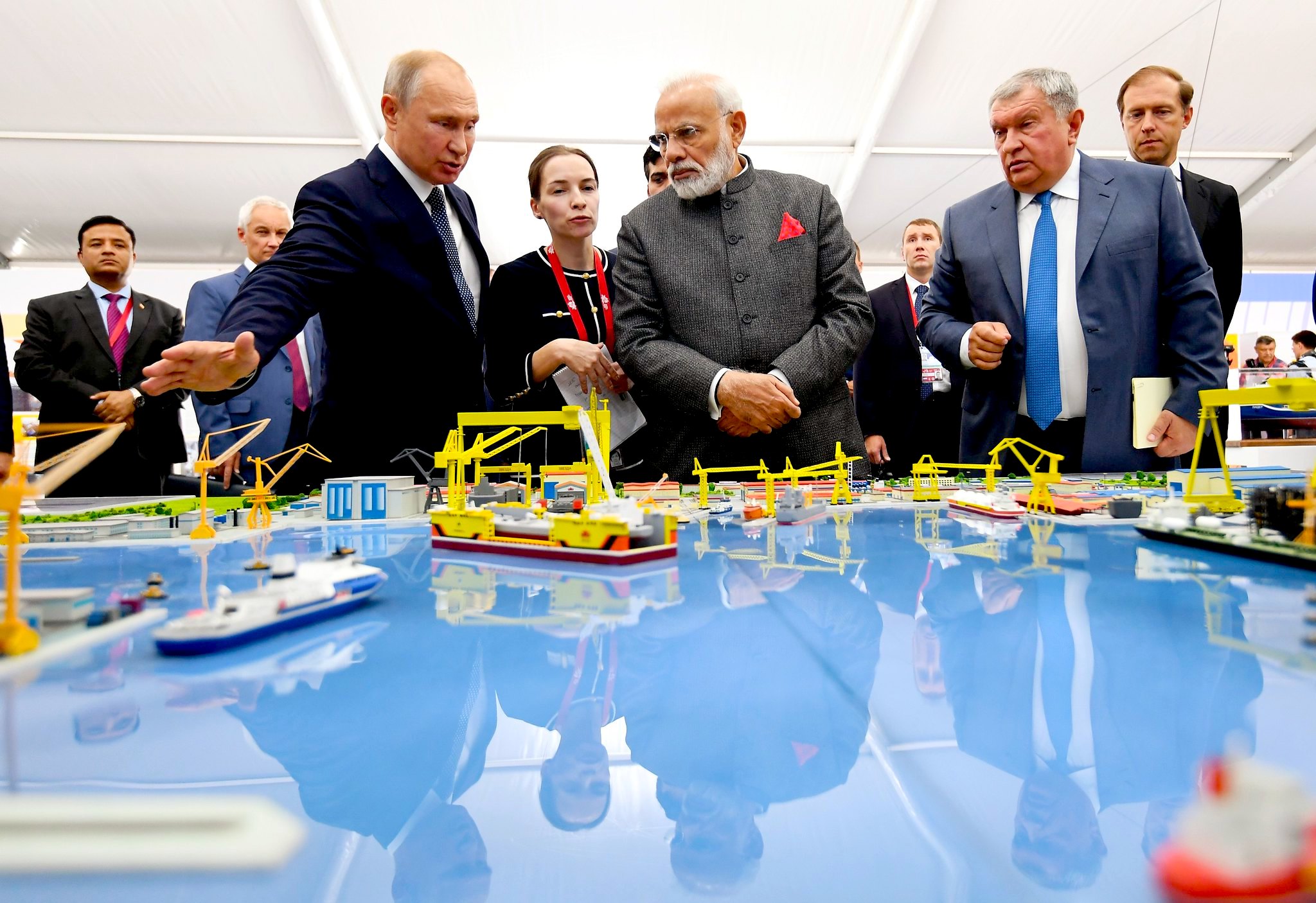 Where, at the Pentagon, the State Department, and the White House, do they get these unschooled notions? From Nehru’s day to ours, the principle of nonalignment has been a sanctified a pillar of Indian foreign policy, as “freedom” is to all right-thinking American ideologues.

There’s no touching it. This was part of Modi’s point when he spoke alongside Putin on Dec. 6.

Antony Blinken made his first state visit to New Delhi in July 2021, a few months after taking office. His themes were the usual — “our strategic partnership” and so on. “Our interests are shared, our concerns are similar, and our convergences are strong,” saith the American secretary of state. All that is fine: India has no desire to stand militantly against the U.S.

But the reality beneath the pronouncements of Blinken, Austin, von der Leyen, et al. is that the West simply cannot accept a world in which nonalignment, noninterference, territorial integrity, and associated precepts are held up as abiding principles. A lot of liberals mocked the Bush–Cheney regime and its with-us-or-against-us routines. Now we find that Western elites and the trans–Atlantic foreign policy cliques have no capacity to see the world differently. 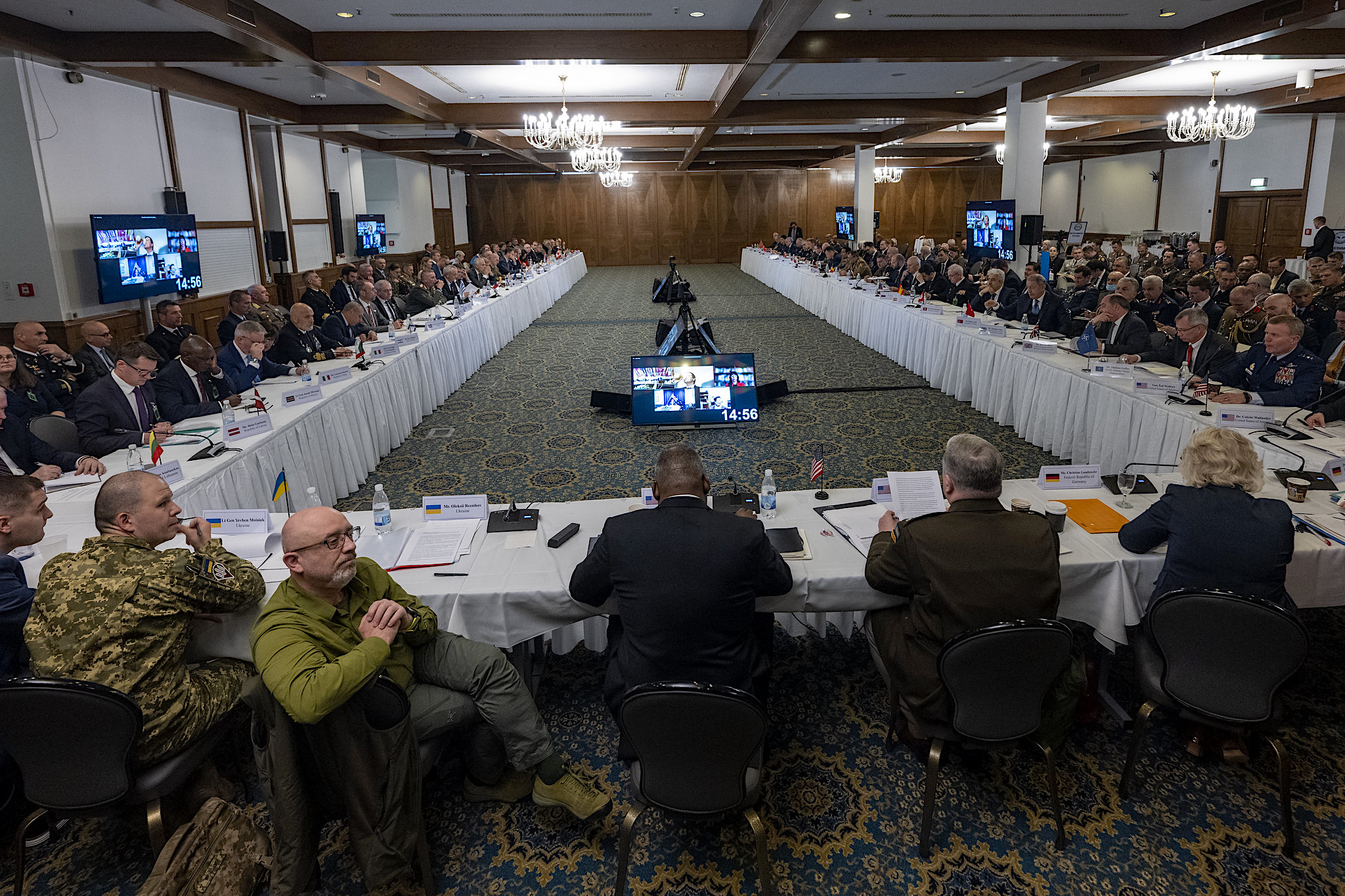 Hannah Beech, The New York Times Southeast Asia bureau chief, shared the byline Monday on a story headlined, “With Us or With Them? In a New Cold War, How About Neither.” This is the first — and so far only — clear-eyed report we have in corporate media on the nonaligned majority of nations that the Ukraine crisis has pushed to the fore. Beech and her colleagues write:

“The geopolitical landscape following the Ukraine invasion has often been likened to that of a new Cold War. While the main antagonists may be the same — the United States, Russia and, increasingly, China — the roles played by much of the rest of the world have changed, reshaping a global order that held for more than three-quarters of a century.”

More in the way of 500 years, Hannah, but who’s counting?

I have a certain amount of time for Beech. She has good bloodlines, as they say in the trade: Her father, Keyes Beech, was among the outstanding Asia correspondents of his generation. And she has a measured sympathy for non–Western perspectives that is unheard-of among the drips that generally populate the Times’s foreign bureaus.

Beech and her colleagues make the very astute point that non–Western nations paid a very high price for the deprivations and depredations the Cold War decades inflicted upon them — and do not intend to pay it again. “Governments representing more than half of humanity have refused to take a side,” they write, “avoiding the binary accounting of us-versus-them that characterized most of the post–World War II era.”

I do not see this sentiment ebbing once the Ukraine crisis is resolved one way or another. Washington’s overreaching adventure, with NATO allies following its lead, may well divide the world once again — not as the West intends, but between those nations who insist on a proper world order based on international law and those who insist they are above it.

For half a millennium — from Portugal’s 15th century intrusions in Asia and the Americas — there was no such thing as isolating the West: It was a logical impossibility, a convolution. This is no longer so, as the leading non–­Western nations now know. So long as Western democracies refuse to accept this, they will set themselves up to lose the 21st century.

Alistair Crooke, founder and director of the Conflicts Forum and a familiar commentator on global affairs, just published an interesting piece headlined, “The Dynamics of Escalation: ‘Standing with Ukraine.’” Crooke thinks the Biden administration has effectively trapped itself on a path to military involvement in Ukraine — direct involvement, this is to say.

The war-by-sanctions, for a variety of reasons, cannot succeed in bringing Russia down as intended. At the same time, Crooke reasons, Biden and the mainstream Democrats cannot possibly accept defeat or failure — not with midterm elections coming, not with all the mythologies they conjured as to Russia’s responsibility for their loss at the polls in 2016:

“The conviction that the European liberal vision faces humiliation and disdain, were Putin to ‘win,’ has taken hold. And in the Obama–Clinton–Deep State nexus, it is unimaginable that Putin and Russia, still regarded as the author of Russiagate for many Americans, might prevail.

The logic to this conundrum is inexorable — Escalation.”

How quickly Crooke’s logic manifests itself. During and since their weekend visit to Kiev to promise the regime more weaponry, Austin and Blinken have made it terrifyingly clear that the true objective of the U.S.–NATO campaign in Ukraine is just as the more honest among us have said from the start: This is about “weakening Russia,” as the two secretaries put it — subjugating Russia, in other words, crushing it.

Have two not-quite-competent American officials just declared the start of World War III? Let me know when it is all right to express concern about the danger of a nuclear exchange without being called a treasonous propagandist in Moscow’s behalf.

Let’s not miss in all this: The logic of escalation also leads to deepening isolation — America’s, the West’s — from the currents that already carry our century forward.

Washington and NATO may be intent on making a hot war out of Cold War II, but they’ve got a radically wrong read on our moment: The further they take this crazy adventure, the more thoroughly they will alienate the rest of the world.

← DIANA JOHNSTONE: France Stuck in the Extreme Center
Who Is the Hero? Albright vs. Assange →

29 comments for “PATRICK LAWRENCE: Ukraine & the Strength of Nonalignment”