After expressing relief and thanking his supporters, the human rights attorney emphasized that Chevron still intends to pursue a civil case against him. 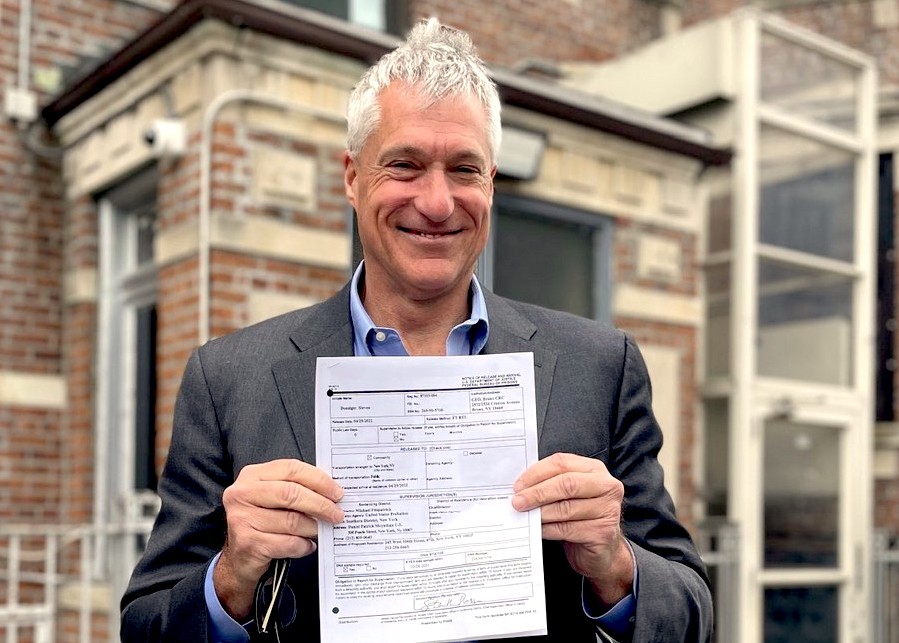 Human rights lawyer Steven Donziger walked free Monday after 993 days of detention stemming from his decades-long legal fight with Chevron, which deployed its vast resources in a campaign to destroy Donziger after he won a $9.5 billion settlement against the fossil fuel giant over its pollution of the Amazon rainforest.

“It’s over. Just left with release papers in hand,” Donziger wrote on Twitter. “Completely unjust that I spent even one day in this Kafkaesque situation. Not looking back. Onward.”

Donziger’s case has attracted global attention and outrage, with the United Nations high commissioner on human rights calling his prolonged detention a violation of international law. Lawmakers in the United States have also decried Donziger’s prosecution as an “unprecedented and unjust legal assault.”

“We are relieved that Steven Donziger will finally recover his freedom after almost 1,000 days of arbitrary detention, which included 45 days in prison and over 900 days under house arrest,” Daniel Joloy, senior policy advisor at Amnesty International, said in a statement Monday. “He should have never been detained for even one day, as it has been clear the whole process against him has been in retaliation for his human rights work that exposed corporate wrongdoings.”

“Corporations must not be allowed to continue abusing the U.S. justice system to silence and intimidate human rights defenders or anyone else exposing their wrongdoing,” Joloy added.

I didn't fully realize what freedom was until it was taken away. My thoughts in those first moments after release. pic.twitter.com/c663i8OQ4f

The legal battle began in 1993 when Donziger and other attorneys — on behalf of tens of thousands of farmers and Indigenous people who lived near the Ecuadorian Amazon — filed a class-action lawsuit against Texaco alleging that the company contaminated the rainforest with its oil drilling operations.

Chevron, which purchased Texaco in 2001, denied the allegations, but an Ecuadorian court in 2011 ordered the U.S. based oil and gas corporation to pay a $9.5 billion settlement — a ruling that Ecuador’s Supreme Court later upheld.

Claiming the settlement was fraudulently obtained, Chevron withdrew its assets from Ecuador, refused to pay the settlement, and launched a massive legal attack on Donziger, suing him in New York City.

In 2014, a federal judge with ties to Chevron ruled that Donziger was guilty of a “pattern of racketeering activity,” a charge he has denied. U.S. District Judge Lewis Kaplan’s decision was based on testimony from a witness who later admitted to lying.

When Donziger refused to comply with Kaplan’s order to hand his cell phone and computer over to Chevron, arguing that the devices contained sensitive client information, Kaplan charged Donziger in 2019 with six counts of criminal contempt and the attorney was placed under house arrest while awaiting trial.

After the Southern District of New York declined to take up the case against Donziger, Kaplan appointed a Chevron-connected private law firm to pursue the prosecution. Kaplan then chose U.S. District Judge Loretta Preska — previously a member of the Chevron-funded Federalist Society — to preside over the case.

Last July, Preska found Donziger guilty on all six counts of criminal contempt of court, a decision he slammed as an “obvious travesty of justice.” Donziger was sentenced in October to six months in federal prison, where he remained until December, when he was transferred back to house arrest under a coronavirus-related early release program.

Given that Donziger spent more than two years in detention before even receiving a trial, his sentence has been deemedthe longest “ever recorded for a misdemeanor charge.”

Human rights and environmental organizations have urged U.S. President Joe Biden to pardon Donziger, slamming his prosecution as “retaliation for his work in defense of the rights of Indigenous peoples in Ecuador who were victims of Chevron Corporation’s oil dumping.”

Donziger emphasized in a video posted to Twitter Sunday that Chevron is still pursuing a civil case against him:

After nearly 1,000 days locked up, please know I could not have made it without you and your letters, visits, and kindness. Thinking tonight of the Indigenous peoples still victimized by @Chevron in the Amazon.

Joloy of Amnesty International said Monday that while Donziger is finally free from detention, “the end of this sentence does not mean the end of the injustices Steven has faced.”

“The U.S. government,” said Joloy, “must fully implement the decision of the U.N. Working Group on Arbitrary Detention, including launching an impartial and independent investigation into the circumstances that led to Steven’s arbitrary detention, to prevent something like this from happening again.”

← Chris Hedges: Alice Walker & the Price of Conscience
41 Political Prisoners in Egypt Freed Ahead of Eid →