“The more we threaten the fossil fuel status quo, the less the media covers it,” says one U.S. climate scientist. 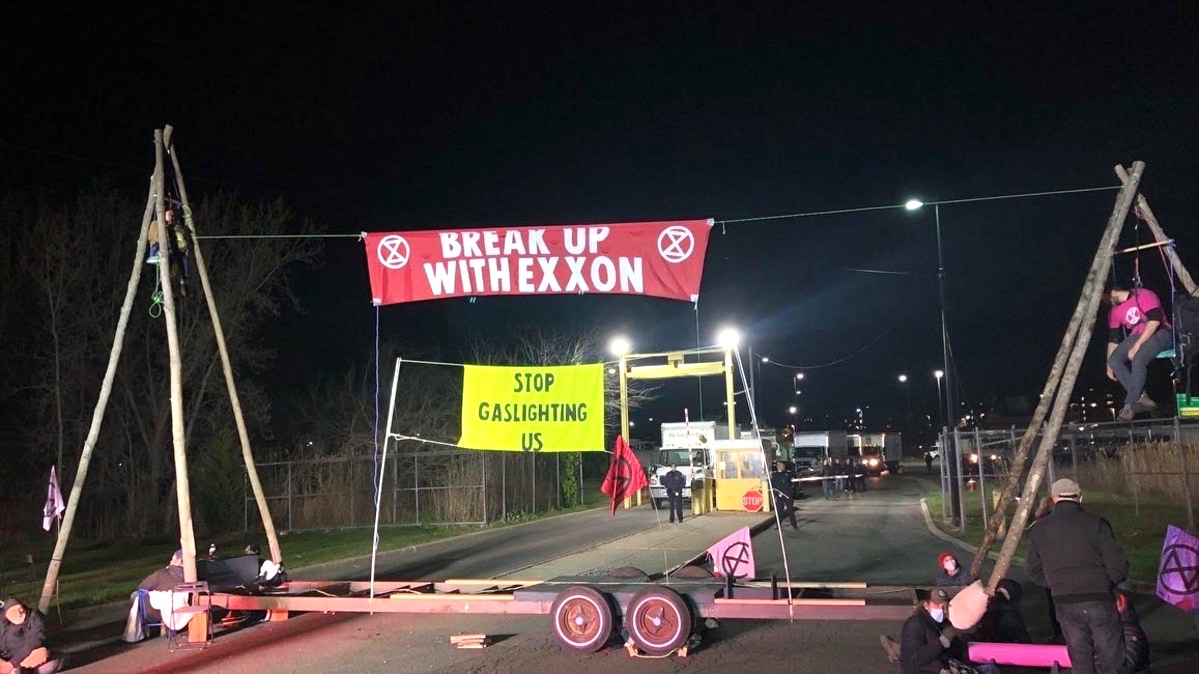 A group of climate campaigners on Friday blockaded the entrance of a printing plant in New York City in an effort to hamper the distribution of The New York Times, The Wall Street Journal, and other corporate-owned newspapers to protest their failure to cover the planetary emergency with “the frequency it deserves.”

The activists, operating under the banner of Extinction Rebellion, stressed in a statement that the blockade was targeted not at individual journalists, but “at the board of directors and senior management at these institutions that determine what to include and exclude in each publication.”

“Extinction Rebellion stands behind the right to free speech and a free press, and views the breaking of certain concrete mundane laws as a public plea for societal change,” the statement reads. “The climate and ecological crisis is already here — destroying people’s homes and livelihoods with extreme weather, droughts, and fire — yet governments and corporations, influenced by mass media corporations, are complacent by continuing to ignore the root causes of the crisis and the dire situation humanity is facing.”

The demonstration singled out News Corp, The New York Times Company, and Gannett — which respectively own the Journal, the Times and USA Today — for “enabling the government’s gaslighting of the public” by burying critical climate stories below the fold or in later pages. The outlets have also come under fire for plastering fossil fuel company ads alongside their coverage and actively perpetuating climate disinformation.

Such failures, the campaigners argued, make it “easy for government to act like the climate and ecological crisis is years away, ignore scientists’ urgent calls to action, and refuse to take the steps we need to start transforming our systems from finite and fragile to strong and resilient.”

“They must be clear about the extreme cascading risks humanity now faces, the injustice this represents, its historic roots, and the urgent need for rapid political, social, and economic change,” the activists continued. “This includes more front-page coverage of the climate emergency.”

#BREAKING – Extinction Rebellion blockade at @nytimes @WSJ printing plant now to call out major US newspapers for failing to cover the climate emergency with the frequency it deserves. pic.twitter.com/oZw7g1q9S4

The demonstration came as scientists and youth climate activists around the world, marking Earth Day, engaged in rallies and non-violent civil disobedience to condemn their governments’ continued support for fossil fuel production as accelerating warming wreaks havoc across the globe.

“This is not a ‘happy Earth Day,'” Swedish activist Greta Thunberg tweeted Friday. “It never has been. Earth Day has turned into an opportunity for people in power to post their ‘love’ for the planet, while at the same time destroying it at maximum speed.”

What do we want? CLIMATE JUSTICE, When do we want it? NOW #EarthDay #EarthDayRiseupMovement pic.twitter.com/kqbOjRIpi0

U.S. climate scientist Peter Kalmus, an expert who has taken direct action in recent days as part of a growing worldwide mobilization, wrote Thursday that “the more we threaten the fossil fuel status quo, the less the media covers it.”

“Our experience with the global Scientist Rebellion was almost no media coverage, and then only a little after it had already gone viral,” Kalmus added. “The revolution will not be televised.”

The more we threaten the fossil fuel status quo, the less the media covers it. 41 @XR_NYC climate activists were arrested this week in New York and only the Village Voice and Common Dreams covered.

We must boost and support climate disobedience on social media. @ScientistRebel1

An online database unveiled earlier this week shows that financial institutions in G20 countries — many of which have pledged meaningful action to combat runaway warming — provided 2.5 times more financing for oil, gas, and coal projects than clean energy between 2018 and 2020, yet another example of governments’ refusal to heed the increasingly dire warnings of climate scientists.

“The truth is, we have been poor custodians of our fragile home,” United Nations Secretary-General António Guterres said in a statement Friday. “Today, the Earth is facing a triple planetary crisis. Climate disruption. Nature and biodiversity loss. Pollution and waste.”

“This triple crisis is threatening the wellbeing and survival of millions of people around the world,” Guterres continued. “We need to do much more. And much faster. Especially to avert climate catastrophe.”

← WATCH: Europe and Press Freedom, with Roger Waters
US Imposes Flawed Food System on the World →