Twitter has been working in steadily increasing intimacy with the U.S. government since it began pressuring Silicon Valley platforms to regulate content in support of the establishment following the 2016 election. 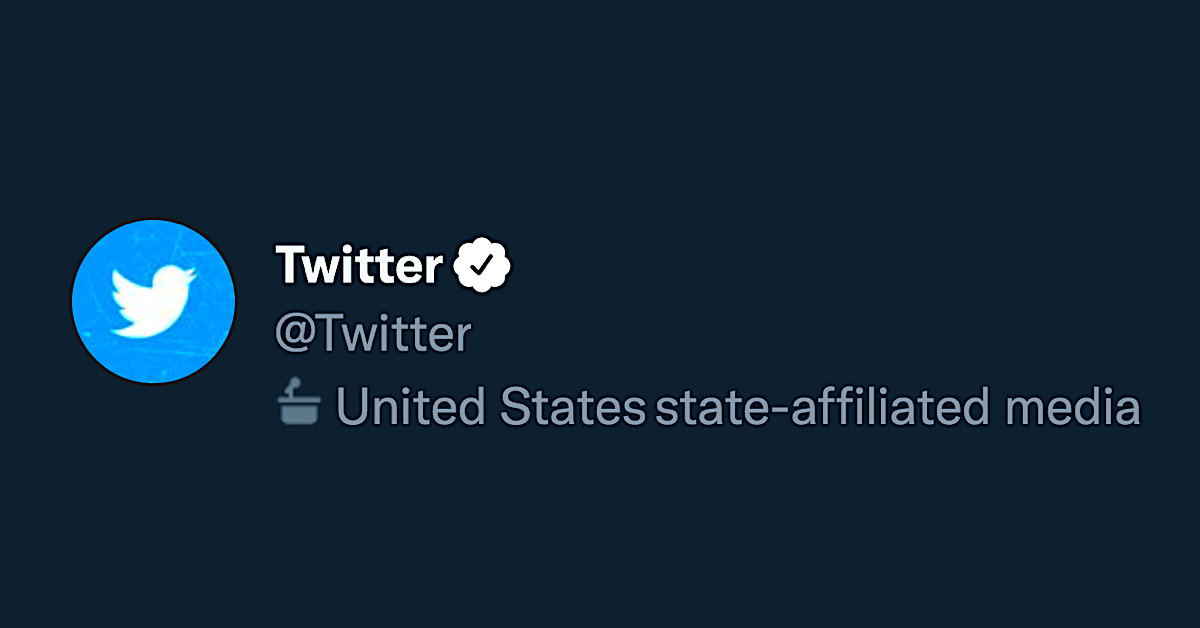 British politician and broadcaster George Galloway has made headlines in the U.K. with his threat to press legal action against Twitter for designating his account “Russia state-affiliated media,” a label which will now show up under his name every time he posts anything on the platform.

“Dear @TwitterSupport I am not ‘Russian State Affiliated media’,” reads a viral tweet by Galloway. “I work for NO Russian media. I have 400,000 followers. I’m the leader of a British political party and spent nearly 30 years in the British parliament. If you do not remove this designation I will take legal action.”

Galloway argues that while his broadcasts have previously been aired by Russian state media outlets RT and Sputnik, because those outlets have been shut down in the U.K. by Ofcom and by European Union sanctions he can no longer be platformed by them even if he wants to. If you accept this argument, then it looks like Twitter is essentially using the “state-affiliated media” designation as a marker of who Galloway is as a person, rather than as a marker of what he actually does.

Dear @TwitterSupport I am not “Russian State Affiliated media”. I work for NO #Russian media. I have 400,000 followers. I’m the leader of a British political party and spent nearly 30 years in the British parliament. If you do not remove this designation I will take legal action.

Regardless of whether you agree with Galloway’s argument or not, this all overlooks the innate absurdity of a government-tied social media corporation like Twitter labeling other people “state-affiliated media”. Twitter is state-affiliated media. It has been working in steadily increasing intimacy with the United States government since the U.S. empire began pressuring Silicon Valley platforms to regulate content in support of establishment power structures following the 2016 election.

In 2020 Twitter was one of the many Silicon Valley corporations who coordinated directly with U.S. government agencies to determine what content should be censored in order to “secure” the presidential election. In 2021 Twitter announced that it was orchestrating mass purges of foreign accounts on the advice of the Australian Strategic Policy Institute (ASPI), which receives funding from many government institutions including the U.S. State Department.

“ASPI is the propaganda arm of the C.I.A. and the U.S. government,” veteran Australian diplomat Bruce Haigh told Mintpress News earlier this year. “It is a mouthpiece for the Americans. It is funded by the American government and American arms manufacturers. Why it is allowed to sit at the center of the Australian government when it has so much foreign funding, I don’t know. If it were funded by anybody else, it would not be where it is at.”

Twitter has also coordinated its mass purges of accounts with a cybersecurity firm called FireEye, which this 2019 Sputnik article by journalist Morgan Artyukhina explains was “founded in 2004 with money from the C.I.A.’s venture capital arm, In-Q-Tel.”

This should be alarming to anyone who cares about truth, free speech or peace, as my new @MintPressNews investigation explains:https://t.co/8Wi11qfpf3

It has been an established pattern for years that whenever Twitter reports that it has purged thousands of accounts which it suspects of inauthentic behavior on behalf of foreign governments, you know it’s never going to be accounts from U.S.-aligned countries like the U.K., Israel or Australia, but consistently from U.S.-targeted nations like Russia, China, Venezuela or Iran. You can choose to believe that’s because the U.S. only aligns with saintly governments who would never dream of engaging in unethical online behavior, but that would be an infantile position which defies all known evidence.

Since the start of the war in Ukraine, Twitter has been aggressively boosting U.S. narratives about the war by frequently showing users a Twitter Topic without their having subscribed to it which is full of imperial spinmeisters, including The Kyiv Independent with all its shady C.I.A.–affiliated origins.

Twitter also promotes U.S. narratives about the war by keeping a “War in Ukraine” section perpetually on the right-hand side of the screen for desktop users, which runs stories that are wildly biased toward the U.S./NATO/Ukraine alliance. There was a full day last month where any time I checked Twitter on my laptop I was informed that “Russia continues to strike civilian targets in Kyiv and across Ukraine.” The claim that Russia had been “targeting” civilians during that time was dismissed as nonsense shortly thereafter by U.S. military experts speaking to Newsweek.

When the invasion began Twitter also started actively minimizing the number of people who see Russian media content, saying that it is “reducing the content’s visibility” and “taking steps to significantly reduce the circulation of this content on Twitter”. It also began placing warning labels on all Russia-backed media and delivering a pop-up message informing you that you are committing wrongthink if you try to share or even ‘like’ a post linking to such outlets on the platform.

Twitter also began placing the label “Russia state-affiliated media” on every tweet made by the personal accounts of employees of Russian media platforms, baselessly giving the impression that the dissident opinions tweeted by those accounts are paid Kremlin content and not simply their own legitimate perspectives. This labeling has led to complaints of online harassment as propaganda-addled dupes seek out targets to act out their media-instilled hatred of all things Russian.

As more and more people find themselves branded with the “Russia state-affiliated media” label, Twitter has concurrently announced that it will be hiding the visibility of any account that wears it, announcing on Tuesday that the platform “will not amplify or recommend government accounts belonging to states that limit access to free information and are engaged in armed interstate conflict.” Which is a bit rich, considering the fact that the U.S. does both of those things.

“This means these accounts won’t be amplified or recommended to people on Twitter, including across the Home Timeline, Explore, Search, and other places on the service. We will first apply this policy to government accounts belonging to Russia,” Twitter said.

This diminished visibility has been verified by people who’ve been slapped with the “Russia state-affiliated media” label. So you can understand why imperial narrative managers whose job is to quash dissent want that designation applied to as many critics of the U.S. empire as possible.

So grateful to live in the liberal, democratic west, where I’m free to oppose the actions of my government… from behind a secret shadow ban that prevents anyone new from finding or hearing me pic.twitter.com/4GsrMBzVxY

If you are curious why the “state-affiliated media” label has not been applied to Twitter accounts associated with government-funded outlets of the U.S. and its allies like NPR and the BBC, it’s because Twitter has explicitly created a loophole to exclude those outlets from such a designation.

“State-financed media organizations with editorial independence, like the BBC in the U.K. or NPR in the U.S. for example, are not defined as state-affiliated media for the purposes of this policy,” Twitter’s rules say.

Which is of course an absurd and arbitrary distinction. Whether you like George Galloway or not, I think anyone who’s familiar with his personality would agree that if anyone ever tried to take away his editorial independence and tell him what he is or isn’t permitted to say, it would take an entire team of surgeons to remove Galloway’s footwear from their personal anatomy. Many people who’ve worked with Russian media have said they’ve never been told what to say, and Galloway is surely one of them.

The audacity of a social media company which works hand-in-glove with the most powerful government on earth to go around branding people “state-affiliated media” is appalling. Twitter is state-affiliated media. It is an instrument of imperial narrative control, just like all the other billionaire Silicon Valley mega-corporations of immense influence. Putin could only dream of having state media that effective.