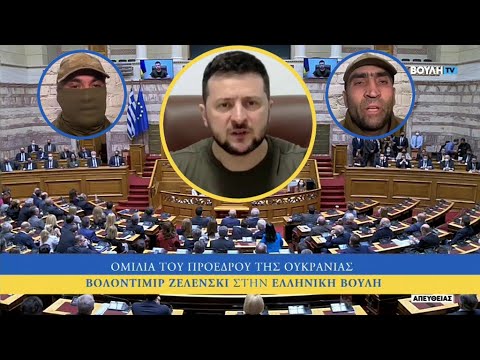 Ukrainian President Volodymyr Zelensky brought along an Azov Nazi of Greek heritage to his speech to the Greek Parliament on Thursday and all hell broke loose, reports Joe Lauria.

Ukrainian President Volodymyr Zelensky has been making a virtual world tour with video hookups to parliaments around the globe, as well as to the Grammy Awards and the U.N. Security Council, sometimes with troublesome results.

On Thursday a major row erupted when Zelensky brought along a Ukrainian soldier of Greek heritage from the city of Mariupol, who just happened to be a member of the ne0-Nazi Azov Regiment. Greece was under Nazi occupation during World War II and fought a bitter partisan war against Nazism (later to be betrayed by Britain and the United States.)

With Zelensky in the screen, the man, who gave only his first name, told Parliament: “I speak to you as a man of Greek descent. My name is Michail. My grandfather fought against the Nazis in the Second World War. I am born in Mariupol and I am now also fighting to defend my city from the Russian nazis.”

Alexis Tsipras, leader of the main opposition party, SYRIZA-Progressive Alliance, blasted the appearance of the Azov fighter before parliament.

“Solidarity with the Ukrainian people is a given. But nazis cannot be allowed to speak in parliament,” Tsipras said on social media. “The speech was a provocation.”  He said Greek Prime Minister Kyriakos Mitsotakis “bears full responsibility. … He talked about a historic day but it is a historical shame.”

Former Foreign Affairs Minister Nikos Kotzias said: “The Greek government irresponsibly undermined the struggle of the Ukrainian people, by giving the floor to a Nazi. The responsibilities are heavy. The government should publish a detailed report of preparation and contacts for the event.”

The Greek Reporter said a government spokesman admitted the mistake but then used it to smear SYRIZA as Russian apologists:

“The socialist KINAL party issued a statement asking why Greek lawmakers had not been informed about the video intervention of an Azov Battalion member and called on the president of the Greek Parliament to bear responsibility.

Government spokesperson Giannis Oikonomou said the inclusion of the Azov Battalion message was ‘incorrect and inappropriate.’ However, he did not say who should be held responsible for this.

Oikonomou, nevertheless, slammed SYRIZA for allegedly ‘using that mistake… to justify the Russian invasion. … It is time for a clear answer: are they on the side of the Ukrainians, who are fighting for their freedom, or [on the side of] Putin’s invaders?’ he said.”

In his speech, Zelensky said:

“I have been waking up every day for more than a month thinking about Mariupol, which is being destroyed by Russian troops. There are still 100,000 people on the border with Mariupol. There is no building left. Mariupol has been destroyed …

Ukraine is one of the Orthodox countries that was Christianised by the Greeks. In Ukrainian culture and history it will be seen that we will lose a big part of history if we lose the culture brought by Greek culture.

Freedom or Death was what your revolutionaries were saying. We are shouting the same today.” [a reference to a slogan of the Greek Revolution of 1821.]

Ignoring Greece’s suffering under German Nazism was a slight made worse by bringing a Nazi along to address Greek lawmakers.

Zelensky has gotten into trouble before by referring to a nation’s history in his addresses to parliaments. He caused outrage in Israel for comparing what Ukraine is going through today to the Holocaust while completely ignoring the role Ukrainian fascists played in that Holocaust.

In his address to the U.N. Security Council on Tuesday Zelensky said Russia had committed the worst war crimes since World War II, ignoring the much bigger crime of aggression by the United States against Iraq built totally on lies.

Just as Western governments and corporate media are doing, the Ukrainian embassy in Athens denied Azov is a Neo-Nazi regiment, despite sporting the Waffen-SS Wolfsangel on their uniforms and their open political alignment with Nazism. The embassy instead tried to turn the tables.

“For many years Russia tried to ‘plant’ into Greek minds the myth that ‘Azov’ Regiment is a paramilitary independent unit operating in Mariupol,” the embassy said in a statement. “The video … has nothing to do to those Nazi deeds, Russians commit on our land and against our people.”

Indeed, Western media have largely ignored the story. Neither The New York Times nor The Washington Post wrote anything about what happened at the Greek parliament and The Wall Street Journal only ran a photo story that didn’t mention the controversy.

Here is the full video of Zelensky’s performance (in Greek):