Australia’s hypersonic missile development, rather than promoting peace in the region, is helping ignite an arms race and increasing the chance of conflict, writes Peter Cronau of Declassified AU.

Australia is already a long way down the track in developing nuclear-capable hypersonic weapons with the U.S. and U.K., despite a new announcement this week by the Australia-U.K.-USA ‘AUKUS’ defence pact.

AUKUS member nations this week, in an update to their much-reported pact of 2021, announced $1-billion for guided missile development in Australia, and stated: “We…committed today to commence new trilateral cooperation on hypersonics and counter-hypersonics.”

Last November Declassified Australia first reported on the work being done with the U.S. and U.K. on the development of hypersonic missiles in Australia for the Australian Defence Force, in a story on the expanding military and intelligence links between the AUKUS trio of nations.

Some of the largest arms manufacturers in the world have been working in Australia in developing hypersonic missile prototypes under the Southern Cross Integrated Flight Research Experiment, or SCIFiRE. 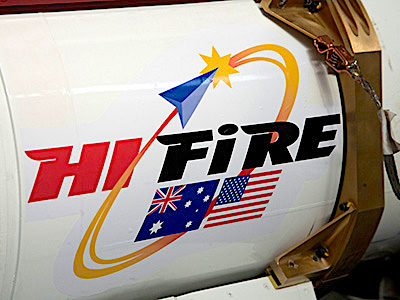 The SCIFiRE hypersonic missile is a high-speed highly-maneuverable plane-launched precision cruise missile that gives a fighter or bomber aircraft a virtually unstoppable anti-shipping capability from over 400 km distance – and much further when used from planes launched off carriers or airbases. They could be nuclear-capable, but at present will be conventionally armed.

The hypersonic missile is light and fast, and will seriously outperform the Tomahawk cruise missiles already on order for the RAAF. The SCIFiRE doesn’t need a bomber to launch and will be carried by RAAF fighter aircraft such as the F/A-18F Super Hornet jetfighter, the new F-35A Lightning II air-combat stealth fighter, as well as the P-8A Poseidon maritime surveillance aircraft. They will be perfect for supporting a U.S. war in the South China Sea.

The U.S. has been testing its domestically-produced HARC hypersonic ramjet weapons and, though troubled by a string of failures, has reportedly tested the Lockheed Martin prototype last month. The new Australian SCIFiRE hypersonic missiles offers better prospects for delivery and are expected to enter service in 5-8 years, ready to join in the plunge over the precipice of a predicted 2030 U.S. war with China

Not to be outdone, Britain’s BAE Systems since 2021 has been developing in Australia a hypersonic weapons system titled Project Javelin. The project involves a hypersonic long-range attack missile named ‘Javelin Strike’, and also, sensibly, defensive counter-measures to protect against high speed weapons named ‘Javelin Shield’. The project is running in parallel with the SCIFiRE missile, in developing a so-called ‘sovereign capability’ for the construction of the weapons in Australia.

Of even greater concern internationally is the potential development of nuclear-armed drone satellites, able to fire multitudes of hypersonic nuclear missiles upon any part of the globe. The U.S. has for a decade been working on a highly secret X-37B Boeing space drone project capable of carrying satellites, as well as nuclear payloads. Now Boeing is presently building the Phantom Express, a hypersonic Experimental Spaceplane XS-1, able to carry payloads with ‘military and commercial applications’.

Such madness may not be too remote from Australia. A Brisbane-based aerospace engineering start-up company Hypersonix Launch Systems, working with the public-funded University of Southern Queensland, has last month received federal government funds for development of its DART CMP Airframe, the world’s first ‘reusable’ hypersonic drone.

Hypersonix is building the airframe of the hypersonic drone, capable of speeds up to 15,000 km/hr, supported by U.S. companies Boeing, and Kratos Defence Security Solutions, which are both separately developing hypersonic drones with military applications.

‘New age’ hypersonic missiles and drones are not the only airborne weapons cooperation occurring between nations of the AUKUS pact. RAAF’s Woomera Test Range in South Australia has been the site of BAE Systems long-delayed development work on its Taranis supersonic stealth bomber drone.

The Defence Department is very serious about arming Australia with hypersonic missiles. In 2020 Defence allocated $9.3-billion for high-speed long-range strike and missile defence including for hypersonic development, test and evaluation. This is part of the eye-watering $270-billion spend on defence capability over the decade under the Force Structure Plan 2020, a part of Australia’s legitimate defence needs, as well as support to military actions of the U.S. empire.

The use of two hypersonic missiles by Russia against Ukraine military targets in March seemed to take the U.S. by surprise. U.S. Defence Secretary Lloyd Austin, publicly downplayed the development, saying he did “not see it as a gamechanger.”

But have no doubt, the sphincters of the U.S. Joint Chiefs of Staff and European military leaders tightened several notches as they realised the Russians had just used in battle a missile for which they have no present defence. Instantly, U.S. military bases, like those in Germany or the NSA satellite surveillance post at Menwith Hill in the U.K., were undefendable.

The Russian Kinzal ‘Dagger’ hypersonic air-to-surface missile reportedly has a range of 2,000 kms and can reach speeds of 12,000 km/hr. The missiles were fired from Mig-31 fighters outside of Ukraine airspace hitting one target in the far west of Ukraine near the border with Poland, a NATO member. As well as destroying the Ukraine military arms depot and fuel storage, the ‘Dagger’ missiles also destroyed the West’s sense of invulnerability.

Russian President Vladimir Putin said development of the hypersonic missiles was permitted following the U.S. decision in 2002 to abandon the 1972 Anti-Ballistic Missile Treaty, a bilateral agreement between the Soviet Union and U.S. China also has developed hypersonic weapons after first testing its Wu-14 missile in 2014.

The need for international controls and a return to adherence to the abandoned mutual containment system by all countries has suddenly become very apparent.

Despite Australia’s headlong rush to splash cash on new advanced military weapons, there is some confusion apparent within the highest levels of the Defence Department as to the real strategic effect of the development and use of hypersonic missiles.

A statement by the Australian defence minister at the time, Linda Reynolds, when speaking about hypersonic weapons for Australia illustrates the confusion: “Investing in capabilities that deter actions against Australia also benefits our region, our allies and our security partners.”

The utilisation of hypersonic missile technology has been described as ‘disruptive capability’ – and disruptive it surely is. Far short of ‘deterring’ other nations, as the minister suggests, hypersonic weapons may increase uncertainty and hence the likelihood of conflict. They are already contributing to a regional arms race with Japan, South Korea, North Korea, Taiwan, USA and China all presently expanding missile development.

The use of hypersonic missiles trashes conventional reluctance to be the first to start a war as it removes the perceived threat of retaliation. Hypersonic missiles which can travel as fast as eight-times the speed of sound, greatly reduce the chance of the targeted nation retaliating, as the warning time reduces dramatically. The first warning now might be the sounds of missile explosions.

At present an uneasy peace between nuclear nations exists, with the belief an enemy would not start a war due to the likely retaliation that would follow any first attack launch. The hypersonic capability allows nations to launch with a much reduced fear of interception or retaliation.

Hypersonic missiles will allow for a pre-emptive war if the nation possessing them thinks an enemy state is moving towards conflict. The Mutually Assured Destruction, or MAD, window for avoiding war is slamming shut.

“We remain committed to peace and stability in the region,” said the defence minister. These words indicate a view far from a reality of the increased risk of hypersonic-propelled destructive conflict and a newly-energised regional arms race.

This article appeared on Declassified Australia and is republished with permission.

Peter Cronau is co-founder of DECLASSIFIED AUSTRALIA, and is a multi-award winning investigative journalist, writer, and film-maker. He is co-editor of the recent book A Secret Australia – Revealed by the WikiLeaks Exposés.

3 comments for “Fast Track to Armageddon”