An analysis by BailoutWatch, Friends of the Earth and Public Citizen describes the two main tactics that fossil fuel giants use to benefit investors. 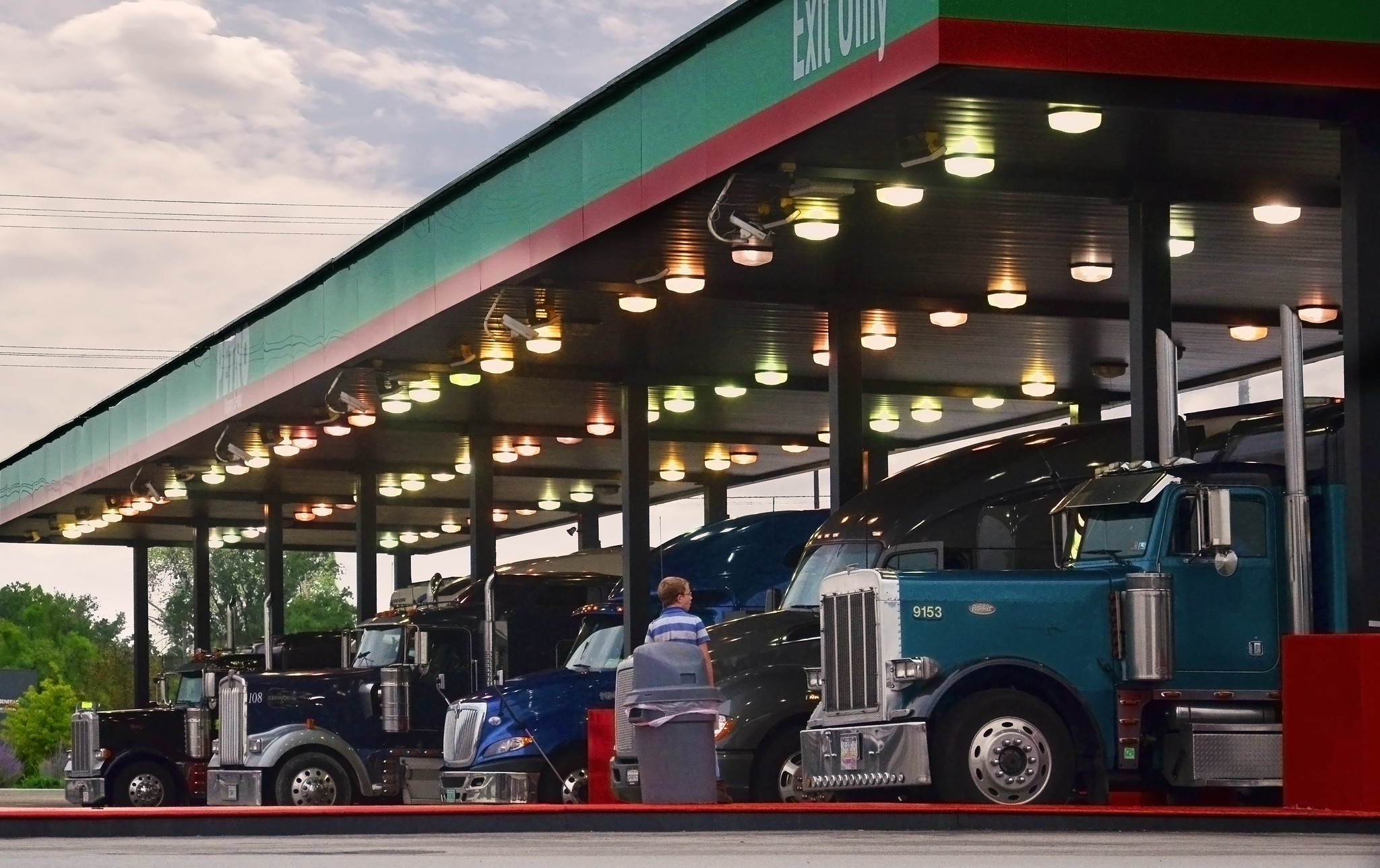 An analysis released Tuesday by a trio of groups highlights how Big Oil has cashed in on various crises over the past year — including the Covid-19 pandemic, Russia’s war on Ukraine, and the global climate emergency —while enriching wealthy shareholders.

The new report from BailoutWatch, Friends of the Earth, and Public Citizen explains that there are two main tactics that fossil fuel giants use to benefit investors: “First, they repurchase shares of their own stock and retire them, reducing the number of shares outstanding and driving up the value of each share remaining in investors’ hands.”

“Second, they increase dividends, the quarterly payments investors receive for owning shares,” the report continues. “Oil and gas dividends, historically bigger than other sectors’, have spiked in recent months, outstripping every other industry group.”

“Amid high gas prices and war in recent months, oil and gas companies have kicked both tactics into overdrive,” the groups found, based on reviewing public statements and securities filings from the 20 largest U.S.-headquartered fossil fuel corporations.

During the first two months of 2022, “seven companies’ boards authorized their corporate treasuries to buy back and retire $24.35 billion in stock — a 15 percent increase over all of the buybacks authorized in 2021,” the report states.

Six of those decisions came in February 2022, after Russia’s invasion of Ukraine lifted stock prices. The total since the start of 2021 is $45.6 billion. 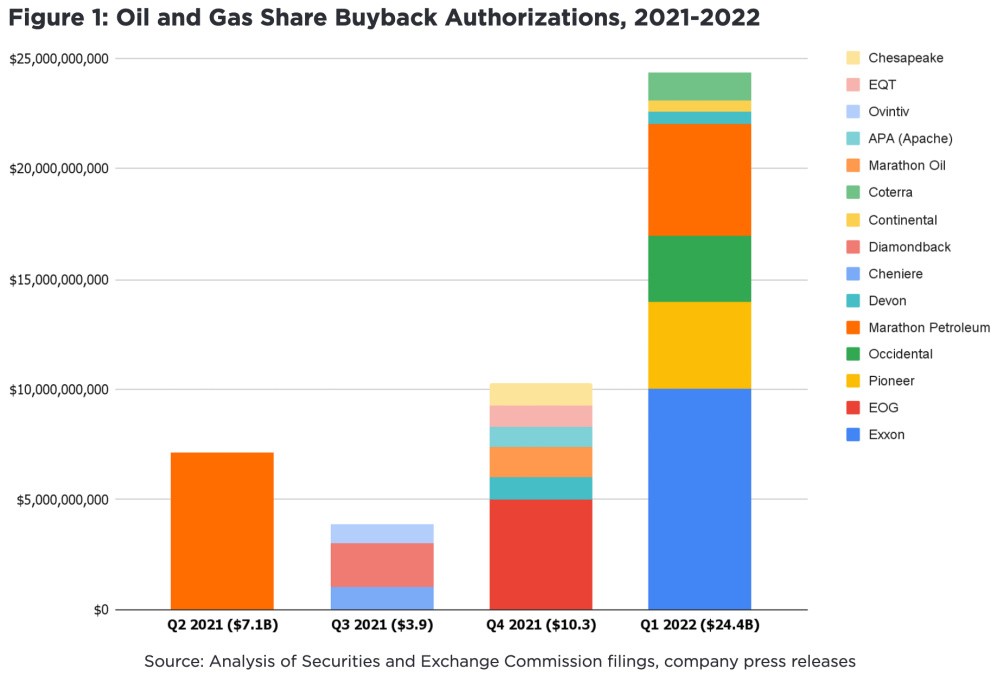 “Six companies have begun paying additional dividends on top of their routine quarterly payments, including by implementing new variable dividends based on company earnings — a way of directing windfall profits immediately into private hands without any possibility of investment, employee benefits, or other uses,” the document points out.

“So far in 2022, these companies have started paying out an initial $3 billion in special windfall dividends,” the report adds. “Four of these companies — Pioneer, Chesapeake, Conoco, and Coterra — announced variable dividends beginning August 2021, as prices began to rise.”

Chris Kuveke of BailoutWatch said in a statement that “Big Oil is living the second half of their unspoken mantra ‘socialize losses, privatize gains.'”

“Two years after winning multi-billion dollar bailouts from the Trump administration, these newly flush companies are pocketing billions from an international crisis, and they don’t care how it affects regular Americans,” Kuveke added.

NEW TODAY: Big Oil is cashing in on a wartime bonus. They’re exploiting surging crude oil prices, a humanitarian disaster in Europe, and consumer pain at the pump. It needs to stop.

As Public Citizen researcher Alan Zibel put it: “Big Oil executives are reaping windfall profits while accelerating the climate crisis and sticking consumers with the bill.”

“The oil industry and their allies on Capitol Hill falsely claim that the Biden administration’s acceptance of mainstream climate science is stifling investment in the domestic oil industry,” he said. “But the industry’s actions show that they are intently focused on funneling cash to their shareholders rather than lowering prices for consumers.”

According to Lukas Ross, climate and energy program manager at Friends of the Earth: “This is a master class in war profiteering. Oil and gas companies are feeding off humanitarian disaster and consumer suffering in order to reward Wall Street.”

“Oil companies drove us into a climate crisis and are now price gouging us to extinction,” he warned. “Congress and President Biden must take action by passing a windfall profits tax to rein in Big Oil’s cash grab.”

The new analysis follows the introduction of multiple bills targeting Big Oil’s windfall profits, including a proposal spearheaded by Senate Budget Committee Chair Bernie Sanders (I-Vt.) designed to crack down on such behavior in all sectors, not just the fossil fuel industry.

Sanders on Tuesday morning held a hearing to call out how corporate greed and profiteering are fueling inflation. During his opening remarks, the chair took aim at Big Oil specifically while listing some examples.

“Yesterday, at a time when gasoline in America is now at a near-record high at $4.17 a gallon, guess what?” Sanders said. “ExxonMobil reported that its profit from pumping oil and gas alone in the first quarter will likely hit a record high of $9.3 billion.”

“Meanwhile,” he added, “Big Oil CEOs are on track to spend $88 billion this year not to decrease supply constraints, not to address the climate crisis, but to buy back their own stock and hand out dividends to enrich their wealthy shareholders.”

The House Energy and Commerce Committee’s Subcommittee on Oversight and Investigations plans to hold a hearing Wednesday titled “Gouged at the Gas Station: Big Oil and America’s Pain at the Pump.” Top executives from BP America, Chevron, Devon Energy, ExxonMobil, Pioneer Natural Resources, and Shell USA are set to appear before the panel.

Jessica Corbett is a reporter for Common Dreams.

4 comments for “Report: Ukraine Crisis Profiteering by US Oil Giants”