Israel has tried to toe a neutral line on Ukraine, but comments from the Israeli foreign minister and a blistering response from the Russian foreign ministry has imperiled the two states’ relations, reports Joe Lauria. 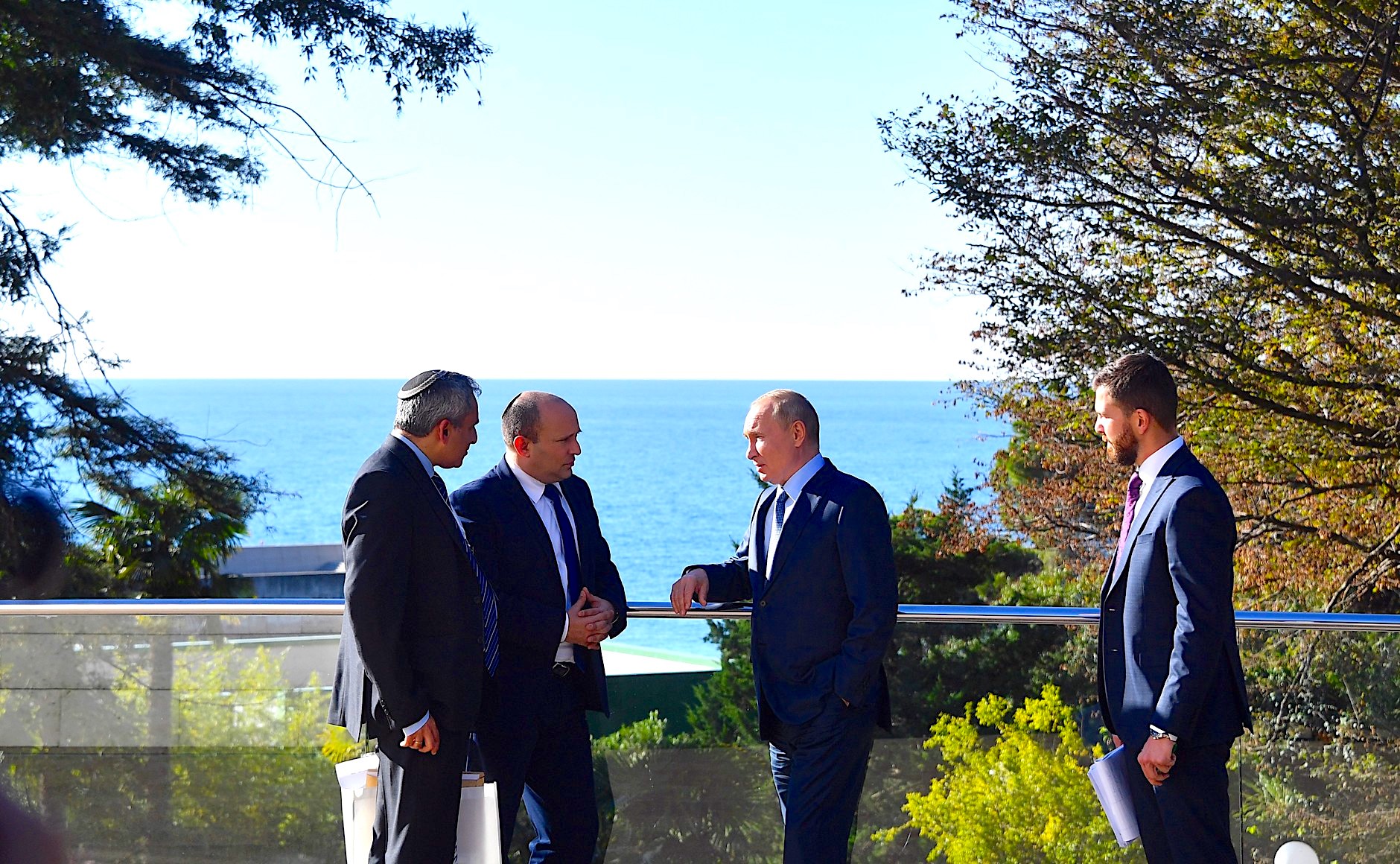 From the start of Russia’s invasion of Ukraine Israel has refused to join the West’s economic war against Moscow, maintaining a neutral stance that as positioned it as a possible broker to end the conflict.

But all that appears to have changed with remarks by Israel’s foreign minister in a Twitter post on Sunday, the day the massacre at Bucha was revealed and before any investigation could be conducted.

Foreign Minister Yair Lapid wrote: “It is impossible to remain indifferent in the face of the horrific images from the city of Bucha near Kyiv, from after the Russian army left. Intentionally harming a civilian population is a war crime and I strongly condemn it.”

Israel’s ambassador to Ukraine also implied that Russia had committed a war crime. “Deeply shocked by the photos from #Bucha. Killing of civilians is a war crime and cannot be justified,” Ambassador Michael Brodsky tweeted on Sunday.

Earlier, on March 13, during a visit to Romania, Lapid had tweeted: “… like Romania, Israel condemns the Russian invasion of Ukraine. It’s without justification, and we call on Russia to stop its firing and attacks, and to resolve this conflict around the negotiating table.”

The Israeli foreign ministry tried to distance itself from the ambassador’s remarks.  Haaretz reported: “Asked if the Foreign Ministry’s official position was that Russia had committed war crimes in Ukraine, a spokesman replied: ‘No. It’s a tweet by the ambassador regarding the photos. He didn’t blame Russia.'”

Prime Minister Naftali Bennett, who flew to Moscow on March 5 to meet with President Vladimir Putin (and was condemned for it), has made no comment about the Bucha incident. Israel is trying to maintain a balancing act between Moscow and Washington, which cannot be pleased with Israel not joining the economic war. Russia and Israel have long maintained good relations, with Moscow even allowing Israel to conduct bombing raids on Syria.

But years of goodwill have now been put on the line with Foreign Minister Lapid’s remarks. And now Russia has struck back. Sergey Ivanov, head of the department of diplomacy and consular service at the Foreign Ministry’s Diplomatic Academy, wrote a scathing critique of Israel on Wednesday, posted on the ministry’s Telegram page.  It holds nothing back, openly condemning Israel for a variety of sins, including its treatment of the Palestinians.

Ivanov wrote that many Western journalists and political analysts have opportunistically become overnight “Ukraine experts” just as Western politicians, such as Lapid, are making rash statements to boost their popularity.

“Serious politicians, especially at such a high level as Minister Lapid, have no right to talk idly,” Ivanov warned. “They should be aware of the possible consequences of what they say, including with regard to relations with Russia.”  He wrote:

“It is especially regrettable that these ill-considered statements have not been made by a Western official (Russians have long become immune to what they say) but by the Foreign Minister of Israel, a major regional partner with which Russia has a decades-long history of multifaceted relations. Moreover, these statements could undermine trust in Israel as a country that wanted to mediate the settlement of the crisis around Ukraine, which is evident from Prime Minister Naftali Bennett’s actions, such as calls to President Vladimir Putin, a visit to Moscow and contacts on this issue with the main players.”

Ivanov then unloaded on Israel’s unjustified behavior towards the Palestinians, signaling that Israel has forfeited any right to criticize Russia. With its “settlements” and continued occupation, Israel has continually undermined any peace settlement leading to a “two state solution,” Ivanov wrote.  “It is all the more strange to hear anti-Russia statements from the Foreign Minister of Israel – the country that has been largely responsible, over many decades, for the failure to achieve a peaceful solution to the Palestinian-Israeli conflict. It is one of the lingering regional problems that continues to affect the lives of millions of people and their futures, as well as international security,” he said.

“Neither does Israel have peace with Lebanon. With that country, it has failed to settle matters such as their land and maritime border, division of water resources, and the repatriation of several hundred thousand Palestinian refugees, who have found refuge in Lebanon. Following Israel’s large-scale blood-letting offensive war against Lebanon in 2006, Israeli aircraft continue their regular incursions into that Arab country’s airspace, incursions that flagrantly violate its sovereignty and UN Security Council Resolution 1701.”

The Russian attack on Israel’s Gaza policy is fiercer still:

“Even according to Western human rights groups, which take an overtly biased stance on most problems, promoting the Anglo-Saxon agenda, Israel’s actions are reminiscent of the apartheid regime, which ruled South Africa until 1994. Over 2.5 million Palestinians living in the West Bank are crammed into scattered areas and are effectively isolated from each other by a system of motorways. The Israeli authorities are pursuing a deliberate policy of confiscating Palestinian lands, as well as demolishing Palestinian buildings on a regular basis.

The situation regarding the Gaza Strip deserves special attention. It is a rather unique example from the historical, political, and demographic perspectives. In fact, 80 percent of the people living in one of the world’s most densely populated areas, where some 2 million people share an area of 362 square kilometres, found themselves there against their will. They are refugees chased from their ancestral lands. In fact, most of the people living there were forced into a reservation. They are like prisoners in a huge prison under an open sky, fenced off for many years by Israel’s impenetrable sea, air and almost complete overland blockade.”

Most directly challenging Israel-Russia relations, the piece goes on to unmask what appears to be Moscow’s true feelings about allowing Israel to bomb Syria:

“Under the pretext of ensuring its national security, Israel has for several years delivered air strikes at targets in the SAR, this on top of the existing differences with Damascus.  These actions grossly violate international law, trample upon Syria’s sovereignty, and run the risk of further escalating confrontation in the region. They have repeatedly led to Syrian civilian casualties, including among children, not to mention the damage done to the combat potential of the Syrian armed forces and accordingly to the efficacy of their efforts to eliminate the terrorist presence on Syrian soil.

Attacks by the Israeli Air Force are directly threatening the Russian military personnel who are providing assistance to the legitimate Syrian authorities in their fight against terrorism. Fifteen Russian officers were killed in an air strike on a Syrian facility in Latakia on September 17, 2018. Israel wrongfully believes that the incident has been forgotten. However, even after that tragedy, on multiple occasions, Israeli pilots on combat missions in Syrian and Lebanese airspace used civilian aircraft as shields, thus putting them in great danger. And once again, we are hearing the same claims that the air raids are to eliminate threats to Israel’s national security.”

The piece calls for Israel to consider its own conduct before it blames others.

“Back to Yair Lapid’s statement in the context of the recent events around Ukraine, specifically that “war is not the way to resolve conflicts.” Perhaps, in this case, the Israeli leadership will consider immediately starting talks with Palestine, in order to implement the UN’s two-state solution? Or maybe the foreign minister of Israel, who said that “the Russian attack on Ukraine is a grave violation of the international order,” could review the foundations of this order, for educational purposes?

He may remember that this order stands on the UN Charter and the decisions of the UN and primarily its Security Council. Perhaps it would be helpful for Israel to take a look at its own conduct with a bit of healthy self-criticism before it allows itself to comment on how Russia defends its legitimate security interests.”

Ukrainian President Volodymyr Zelensky, used to adoring crowds in the West, was met with harsh criticism when he addressed the Knesset on March 20. He dared to compare Russia’s invasion to the Holocaust, whitewashing Ukrainian fascists’ role in the real Holocaust. Zelensky was accused by a Knesset member of trying “to rewrite history and erase the involvement of the Ukrainian people in the extermination of Jews.” Ivanov wrote:

“In our opinion, it is blasphemous for Israel to voice support for the Kiev regime, which has openly started Nazifying all aspects of state and public life, and it is impossible to interpret Mr Lapid’s words in any other way. This betrays the memory of numerous Jews who were tortured to death by Bandera’s henchmen in Babiy Yar and in other locations in Ukraine, Poland and Belarus. We hope that Tel Aviv will modify its rhetoric in this connection, and that it will objectively assess the Kiev regime’s persistent neo-Nazi practices.”

The gloves have clearly come off in Moscow — against the U.S. and its European junior partners, and now against Israel. It’s not clear what will happen to Israel-Russia relations and how it might impact the war. But it seems clear the Russian Foreign Ministry is speaking its mind and doesn’t care anymore.

41 comments for “Russia Hits Back at Israel Over Ukraine”