Rather than neutrally trying to get the facts, White House reporters have become unabashed activists for going to war with Russia. 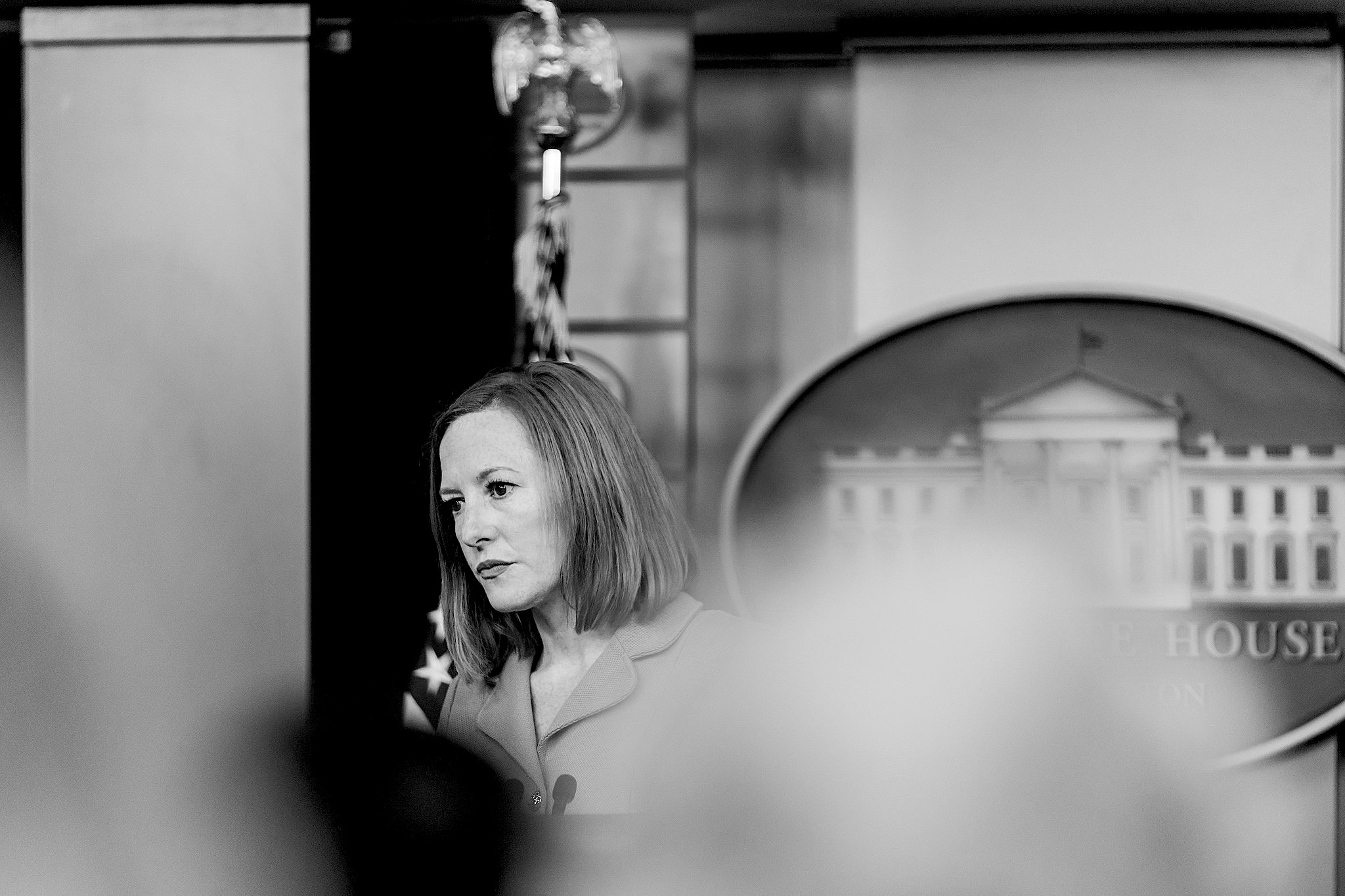 In the run-up to and during the Bush administration’s catastrophic invasion of Iraq, corporate media outlets were accused of acting as stenographers for the White House, amplifying official justifications for the attack—which were lies—while stifling dissenting voices.

Today, having apparently learned no lessons—or the wrong ones—from Iraq, reporters for corporate newspapers and cable TV programs are yet again facing criticism for their coverage of a war, this time one in which the White House has vowed not to involve U.S. troops.

“Much of cable news has become nonstop cheerleading for the U.S. to declare war on Russia.”

During briefings held at the White House over the past week as Russia ramped up its assault on Ukraine, correspondents have incessantly pushed Press Secretary Jen Psaki on President Joe Biden’s refusal to escalate U.S. involvement in the war even further, questioning the administration’s refusal to impose a no-fly zone and send MiG-29 fighter jets to Ukraine.

By contrast, very few questions have centered on the diplomatic talks between Russia and Ukraine and what the U.S. is doing to facilitate the ongoing negotiations.

“Even with this additional aid that you’re providing today, it seems there are still other options on the table,” ABC News correspondent Mary Bruce said during a press briefing Wednesday after President Joe Biden authorized another $800 million worth of weaponry for Ukraine, including drones and anti-aircraft systems.

“So why hold back?” Bruce asked. “Why not use every tool at your disposal now to spare additional lives?”

When Psaki outlined the slew of measures the U.S. has taken in concert with Western allies to cripple Russia’s economy and bolster Ukraine’s defenses—and noted there are additional steps the administration could take in the future—Bruce was not assuaged.

“But what are you waiting for?” she asked.

ABC's @MaryKBruce to Psaki: "You have noted…Putin has shown no signs of changing course. You've also noted that there are significance consequences that Putin could still face…So why hold back? Why not use every tool at your disposal now to spare additional lives?" pic.twitter.com/rynnmAnjXw

That line of questioning—highlighted by The Intercept in one of two video compilations of recent press briefings—encapsulated the approach much of the White House press corps has taken during the first three weeks of Russia’s deadly assault on Ukraine.

In one exchange on Monday, a reporter suggested to Psaki that by refusing to send American troops into Ukraine and impose a no-fly zone—which experts agree would likely spark a full-blown war between the U.S. and Russia—the Biden administration is effectively “pushing these guys [Ukrainian soldiers] to commit suicide.”

“Can you imagine if the press covered climate change like this?” The Intercept‘s Ryan Grim asked during a HillTV segment on Thursday. “Or the expiration of the child tax credit? Or the Saudi and UAE war on Yemen that has led to hundreds of thousands of deaths? Or the seizure of Afghanistan’s central bank reserves?”

Next day was even wilder pic.twitter.com/T0TrF0l8JI

In his HillTV segment, Grim pointed to a striking back-and-forth in which Gray Television‘s White House correspondent Jon Decker pressed Psaki on why the Biden administration is not providing “more offensive weapons” to the Ukrainian military.

The White House press corps is hardly alone in its hawkish coverage of Russia’s assault, which has killed at least 816 civilians and sparked a massive humanitarian crisis.

As Gideon Taaffe and Chloe Simon of Media Matters noted last week, “Both right-wing and mainstream cable news have featured commentary from hosts and guests pushing the idea of a NATO-imposed ‘no-fly zone’ over Ukraine, sometimes without providing important context about the possibility of escalation into a hot war with Russia.”

“On March 4, Fox News contributor and retired Gen. Keith Kellogg pushed for a no-fly zone during an appearance on Fox News‘ America Reports, claiming that ‘no plans are perfect, but there is a way to do and we should at least explore it,'” Taaffe and Simon observed. “On the March 6 edition of Meet the Press, NBC anchor Chuck Todd pressed Secretary of State Anthony Blinken on his hesitancy to execute a no-fly zone, saying, ‘Why rule out the no-fly zone? Why not make Putin think it’s possible?'”

“This eagerness to get into a war with Russia,” the pair wrote, “seems to ignore the potentially devastating consequences of the U.S. initiating that escalation, which could include nuclear fallout.”

“Hopefully this will remain a matter of academic and media studies interest only,” he wrote. “But it is worth considering why much of cable news has become nonstop cheerleading for the U.S. to declare war on Russia, often via a ‘no-fly zone.'”

In a symposium ahead of the 19th anniversary of the Bush administration’s initial bombing of Baghdad, progressive foreign policy analyst Kate Kizer warned that in its coverage of Russia’s war in Ukraine, “the mainstream media is repeating the same mistakes it made 20 years ago in the lead-up to the U.S. invasion of Iraq.”

“When ‘serious’ policy publications invite the likes of uber war hawks like John Bolton into their pages and tankie conspiracy theorists and those complicit in selling the invasion of Iraq onto our screens as legitimate, unbiased commentators, they actively warp the information that gets through to the average viewer,” Kizer wrote. “As usual when there’s the opportunity to inflate ratings, the media jumps on, quickly creating a narrative that war is inevitable, diplomacy is exhausted (before it even gets started), and being against militaristic U.S. or NATO solutions to the crisis is unpatriotic at best.”

“The lesson that national American media outlets have failed to learn is that their critical role in our democracy is more than just questioning ‘official’ narratives,” she added. “It is also remaining critical, or even just acknowledging the confirmation bias produced by the corporate war racketeering in Washington that drives policymakers and the American public to think that our only choices in the face of insecurity and conflict are more war or doing nothing.”

← US Recklessly Eyes China as Target in Economic War
Caitlin Johnstone: The Jaw-Dropping Power of US Propaganda →

26 comments for “US Media Pushing for World War III”