The Dr. Strangeloves, like zombies rising from the mass graves they created around the globe, are once again stoking new campaigns of industrial mass slaughter. 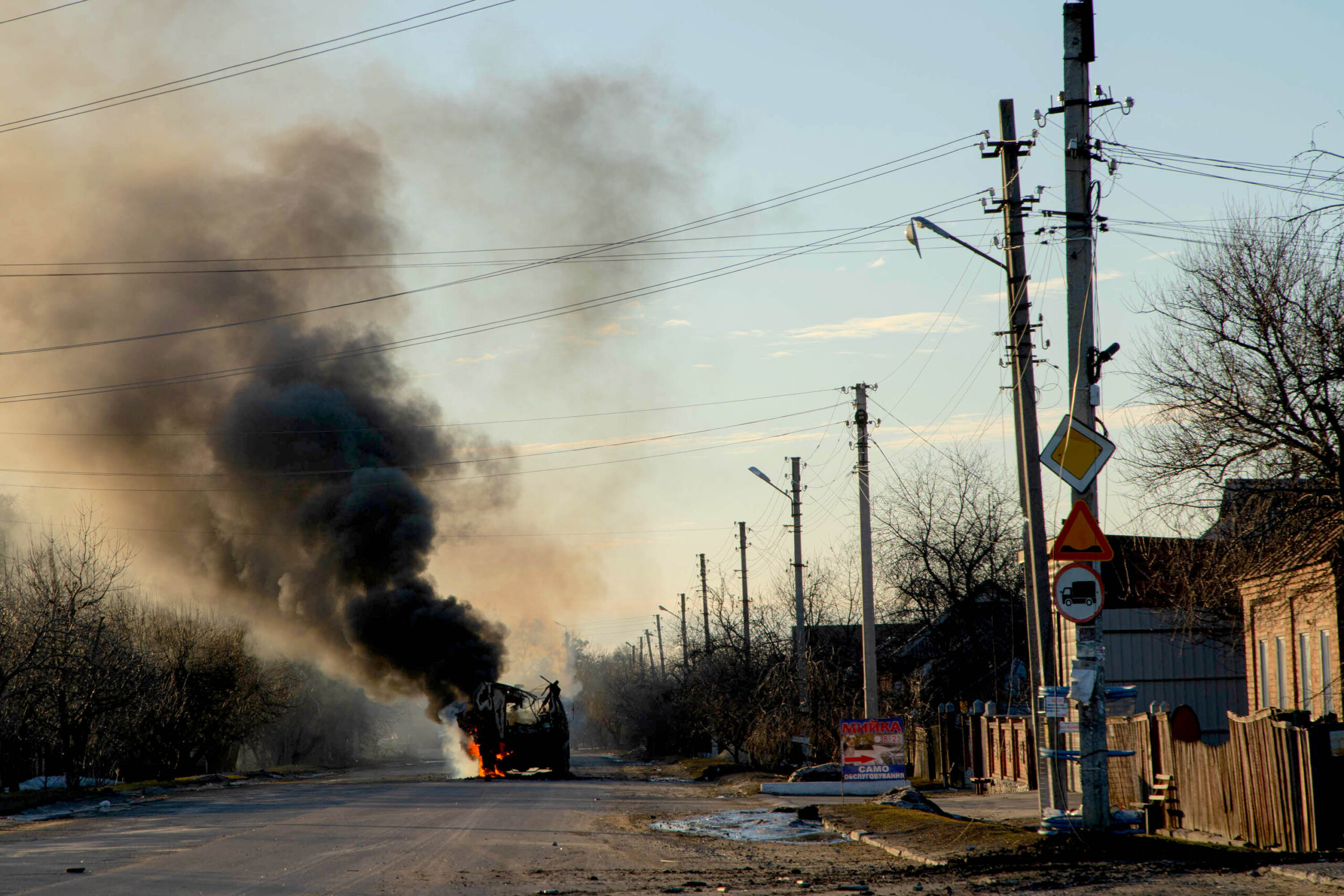 Bus burning on a road from Kharkiv to Kiev as Russia invades Ukraine on Feb. 24. (Yan Boechat/VOA)

The Cold War, from 1945 to 1989, was a wild Bacchanalia for arms manufacturers, the Pentagon, the C.I.A., the diplomats who played one country off another on the world’s chess board, and the global corporations able to loot and pillage by equating predatory capitalism with freedom. In the name of national security, the Cold Warriors, many of them self-identified liberals, demonized labor, independent media, human rights organizations, and those who opposed the permanent war economy and the militarization of American society as soft on communism.

That is why they have resurrected it.

The decision to spurn the possibility of peaceful coexistence with Russia at the end of the Cold War is one of the most egregious crimes of the late 20th century. The danger of provoking Russia was universally understood with the collapse of the Soviet Union, including by political elites as diverse as Henry Kissinger and George F. Kennan, who called the expansion of NATO into Central Europe “the most fateful error of American policy in the entire post-Cold War era.”

This provocation, a violation of a promise not to expand NATO beyond the borders of a unified Germany, has seen Poland, Hungary, the Czech Republic, Bulgaria, Estonia, Latvia, Lithuania, Romania, Slovakia, Slovenia, Albania, Croatia, Montenegro and North Macedonia inducted into the Western military alliance.

This betrayal was compounded by a decision to station NATO troops, including thousands of U.S. troops, in Eastern Europe, another violation of an agreement made by Washington with Moscow. The Russian invasion of Ukraine, perhaps a cynical goal of the Western alliance, has now solidified an expanding and resurgent NATO and a rampant, uncontrollable militarism. The masters of war may be ecstatic, but the potential consequences, including a global conflagration, are terrifying.

Peace has been sacrificed for U.S. global hegemony. It has been sacrificed for the billions in profits made by the arms industry. Peace could have seen state resources invested in people rather than systems of control. It could have allowed us to address the climate emergency. But we cry peace, peace, and there is no peace. Nations frantically rearm, threatening nuclear war. They prepare for the worst, ensuring that the worst will happen. 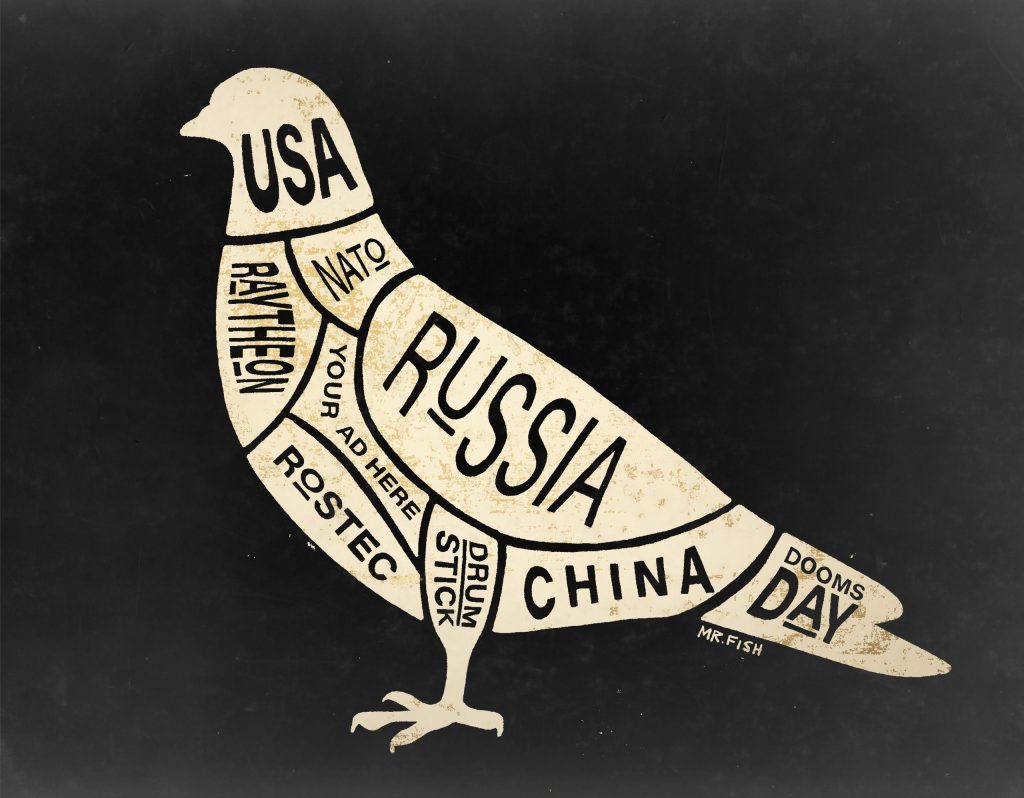 So, what if the Amazon is reaching its final tipping point where trees will soon begin to die off en masse? So what if land ice and ice shelves are melting from below at a much faster rate than predicted? So what if temperatures soar, monster hurricanes, floods, droughts, and wildfires devastate the earth? In the face of the gravest existential crisis to beset the human species, and most other species, the ruling elites stoke a conflict that is driving up the price of oil and turbocharging the fossil fuel extraction industry. It is collective madness.

The march towards protracted conflict with Russia and China will backfire. The desperate effort to counter the steady loss of economic dominance by the U.S. will not be offset by military dominance. If Russia and China can create an alternative global financial system, one that does not use the U.S. dollar as the world’s reserve currency, it will signal the collapse of the American empire. The dollar will plummet in value. Treasury bonds, used to fund America’s massive debt, will become largely worthless. The financial sanctions used to cripple Russia will be, I expect, the mechanism that slays Americans, if not immolation in thermonuclear war.

The decision to destroy the Russian economy, to turn the Ukrainian war into a quagmire for Russia and topple the regime of Vladimir Putin will open a Pandora’s box of evils. Massive social engineering — look at Afghanistan, Iraq, Syria, Libya or Vietnam — has its own centrifugal force. It destroys those who play God.

The Ukrainian war has silenced the last vestiges of the Left. Nearly everyone has giddily signed on for the great crusade against the latest embodiment of evil, Vladimir Putin, who, like all our enemies, has become the new Hitler.

The United States will give $13.6 billion in military and humanitarian assistance to Ukraine, with the Biden administration authorizing an additional $200 million in military assistance. The 5,000-strong EU rapid deployment force, the recruitment of all Eastern Europe, including Ukraine, into NATO, the reconfiguration of former Soviet bloc militaries to NATO weapons and technology have all been fast tracked.

Germany, for the first time since World War II, is massively rearming. It has lifted its ban on exporting weapons. Its new military budget is twice the amount of the old budget, with promises to raise the budget to more than 2 percent of GDP, which would move its military from the seventh largest in the world to the third, behind China and the United States. 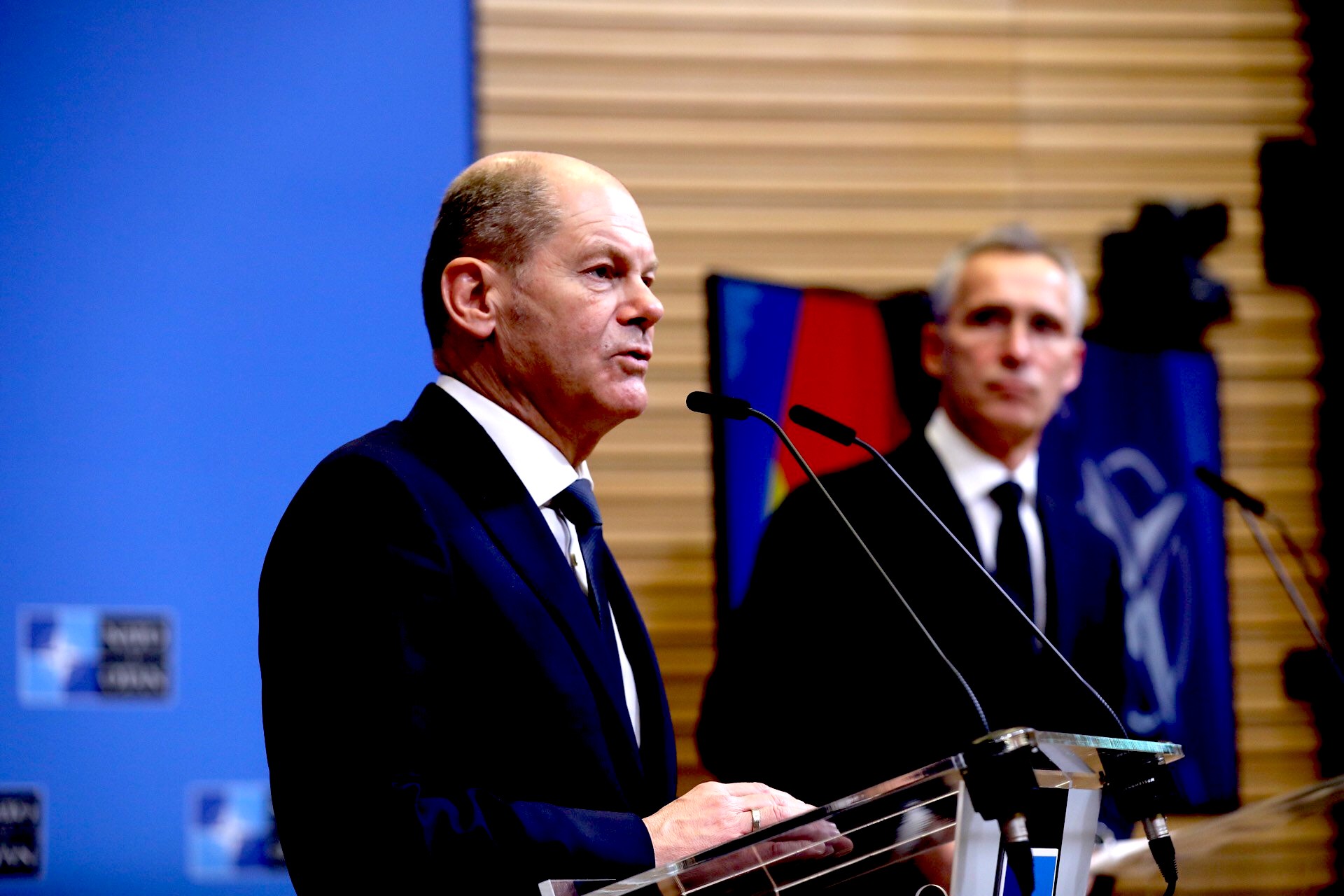 NATO battlegroups are being doubled in size in the Baltic states to more than 6,000 troops. Battlegroups will be sent to Romania and Slovakia. Washington will double the number of U.S. troops stationed in Poland to 9,000. Sweden and Finland are considering dropping their neutral status to integrate with NATO.

This is a recipe for global war. History, as well as all the conflicts I covered as a war correspondent, have demonstrated that when military posturing begins, it often takes little to set the funeral pyre alight. One mistake. One overreach. One military gamble too many. One too many provocations. One act of desperation.

Russia’s threat to attack weapons convoys to Ukraine from the West; its air strike on a military base in western Ukraine, 12 miles from the Polish border, which is a staging area for foreign mercenaries; the statement by Polish President Andrzej Duda that the use of weapons of mass destruction, such as chemical weapons, by Russia against Ukraine, would be a “game-changer” that could force NATO to rethink its decision to refrain from direct military intervention — all are ominous developments pushing the alliance closer to open warfare with Russia. 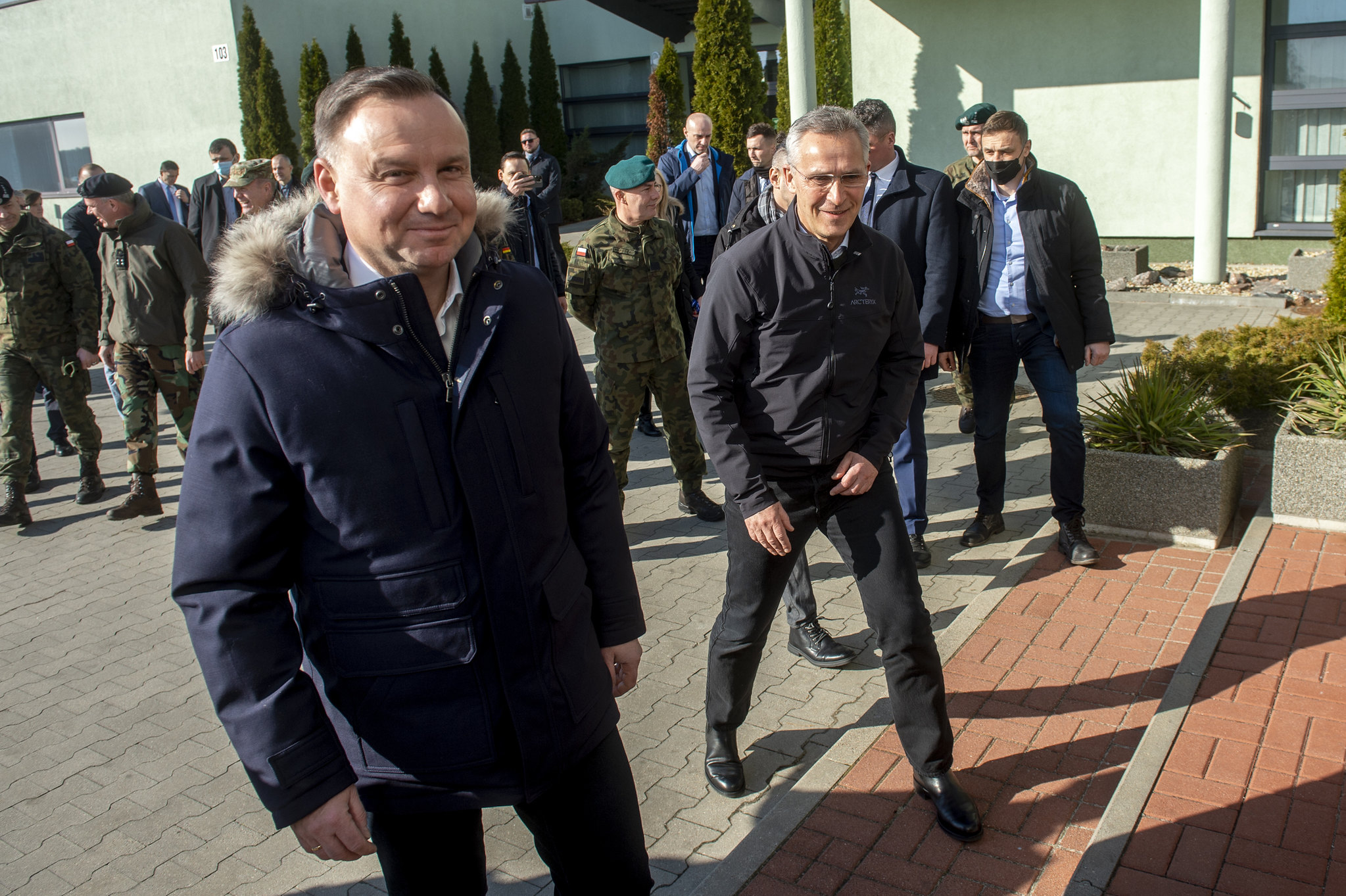 Once military forces are deployed, even if they are supposedly in a defensive posture, the bear trap is set. It takes very little to trigger the spring. The vast military bureaucracy, bound to alliances and international commitments, along with detailed plans and timetables, when it starts to roll forward, becomes unstoppable. It is propelled not by logic but by action and reaction, as Europe learned in two world wars.

The moral hypocrisy of the United States is staggering. The crimes Russia is carrying out in Ukraine are more than matched by the crimes committed by Washington in the Middle East over the last two decades, including the act of preemptive war, which under post-Nuremberg laws is a criminal act of aggression. Only rarely is this hypocrisy exposed as when U.S. Ambassador to the United Nations Linda Thomas-Greenfield told the body:

“We’ve seen videos of Russian forces moving exceptionally lethal weaponry into Ukraine, which has no place on the battlefield. That includes cluster munitions and vacuum bombs which are banned under the Geneva Convention.”

Hours later, the official transcript of her remark was amended to tack on the words “if they are directed against civilians.” This is because the U.S., which like Russia never ratified the Convention on Cluster Munitions treaty, regularly uses cluster munitions. It used them in Vietnam, Laos, Cambodia, and Iraq. It has provided them to Saudi Arabia for use in Yemen. Russia has yet to come close to the tally of civilian deaths from cluster munitions delivered by the U.S. military.

The Dr. Strangeloves, like zombies rising from the mass graves they created around the globe, are once again stoking new campaigns of industrial mass slaughter. No diplomacy. No attempt to address the legitimate grievances of our adversaries. No check on rampant militarism. No capacity to see the world from another perspective. No ability to comprehend reality outside the confines of the binary rubric of good and evil. No understanding of the debacles they orchestrated for decades. No capacity for pity or remorse. 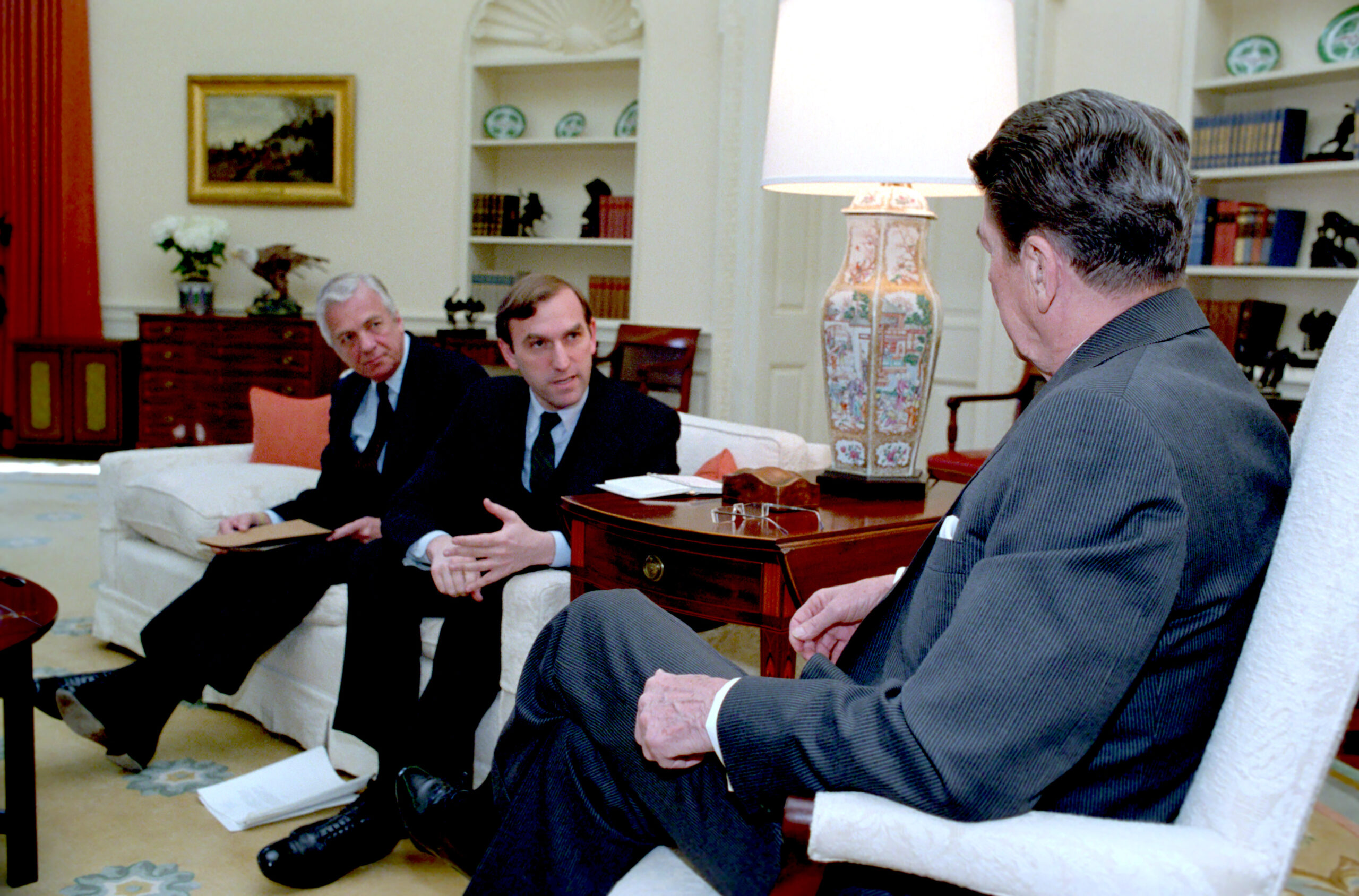 Elliott Abrams worked in the Reagan administration when I was reporting from Central America. He covered up atrocities and massacres committed by the military regimes in El Salvador, Guatemala, Honduras and by the U.S.-backed Contra forces fighting the Sandinistas in Nicaragua. He viciously attacked reporters and human rights groups as communists or fifth columnists, calling us “un-American” and “unpatriotic.” He was convicted for lying to Congress about his role in the Iran-Contra affair. During the administration of George W. Bush, he lobbied for the invasion of Iraq and tried to orchestrate a U.S. coup in Venezuela to overthrow Hugo Chávez. 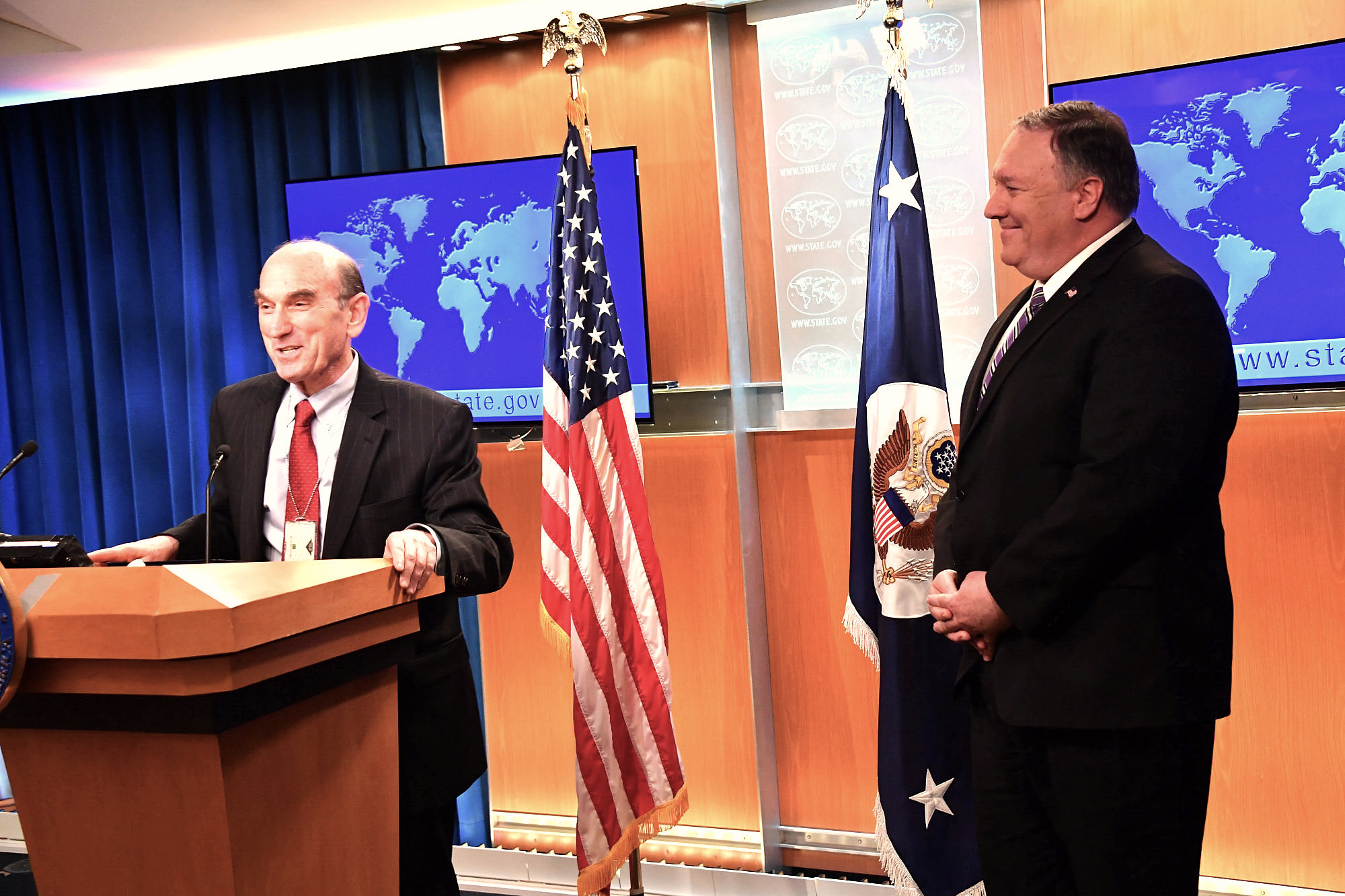 “There will be no substitute for military strength, and we do not have enough,” writes Abrams for the Council on Foreign Relations, where he is a senior fellow:

“It should be crystal clear now that a larger percentage of GDP will need to be spent on defense. We will need more conventional strength in ships and planes. We will need to match the Chinese in advanced military technology, but at the other end of the spectrum, we may need many more tanks if we have to station thousands in Europe, as we did during the Cold War. (The total number of American tanks permanently stationed in Europe today is zero.) Persistent efforts to diminish even further the size of our nuclear arsenal or prevent its modernization were always bad ideas, but now, as China and Russia are modernizing their nuclear weaponry and appear to have no interest in negotiating new limits, such restraints should be completely abandoned. Our nuclear arsenal will need to be modernized and expanded so that we will never face the kinds of threats Putin is now making from a position of real nuclear inferiority.”

Putin played into the hands of the war industry. He gave the warmongers what they wanted. He fulfilled their wildest fantasies. There will be no impediments now on the march to Armageddon. Military budgets will soar. The oil will gush from the ground. The climate crisis will accelerate.

China and Russia will form the new axis of evil. The poor will be abandoned. The roads across the earth will be clogged with desperate refugees. All dissent will be treason. The young will be sacrificed for the tired tropes of glory, honor and country. The vulnerable will suffer and die.

The only true patriots will be generals, war profiteers, opportunists, courtiers in the media and demagogues braying for more and more blood. The merchants of death rule like Olympian gods.  And we, cowed by fear, intoxicated by war, swept up in the collective hysteria, clamor for our own annihilation.