The settlement of the Ukraine war or its escalation to a NATO-Russia conflict with all that entails comes down to how far Ukraine will go to get the Western alliance involved in its war, writes Joe Lauria.

The choice is stark for Ukrainian President Volodymyr Zelensky:  accept that his defeat is inevitable and accept Russian terms for surrender or continue to seek a way for NATO to become perilously involved in his fight against Moscow.

Russia is making three demands of Kiev to end the war on its terms: recognize Crimea as part of Russia; grant independence to Lugansk and Donetsk in the Donbass and enshrine Ukraine as a neutral state in its constitution, meaning it will never join NATO. A 90-minute meeting in Turkey on Thursday between the Russian and Ukrainian foreign ministers resulted in no progress at all towards a solution, as this phase of the war enters its third week.

Zelensky veers from one position to another from day to day and sometimes within the same media interview. In his appearance on ABC News in the U.S. last Sunday he showed both defiance and potential conciliation.

Zelensky has lambasted NATO as “weak” because it has not yet intervened on his behalf. He is still asking for Polish Mig jets to be sent to Ukraine to fight Russia. He is still calling for a NATO-enforced no-fly zone over Ukraine. In this he has powerful allies at the U.S. State Department in Secretary of State Antony Blinken and Assistant Secretary of State Victoria Nuland, and in Congress, led by House Speaker Nancy Pelosi. 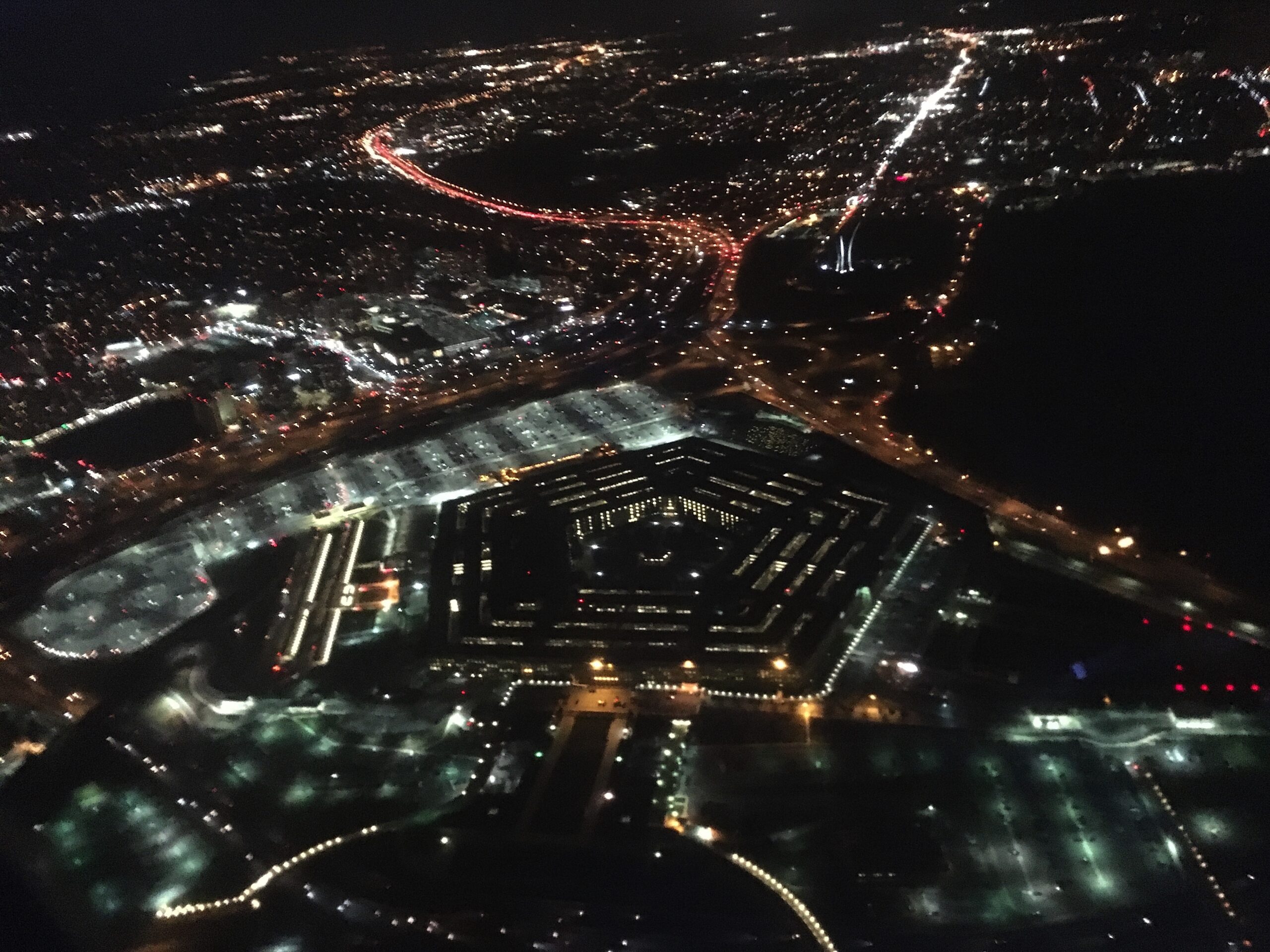 The Pentagon, however, has demonstrably put its foot down against both the Polish jets scheme and a NATO-led no-fly zone. The steely realists at the Defense Department understand the grave implications of NATO being perceived as part of the war if its planes enter the fight, especially if sorties against Russia leave from the territory of a NATO country.  The U.S. brass understands with crystal clarity, even if some members of Congress do not, that a NATO no-fly zone would mean war between the alliance and Russia with all the terrifying possibilities that could follow.

Biden is in the middle of this struggle between the Pentagon and the State Department.  “President [Joe] Biden’s been clear that U.S. troops won’t fight Russia in Ukraine, and if you establish a no-fly zone, certainly in order to enforce that no-fly zone, you’ll have to engage Russian aircraft. And again, that would put us at war with Russia,” said U.S. Defense Secretary Lloyd Austin.

The U.S. strategy in luring Russia into Ukraine was to make possible an economic war of unprecedented proportions as well as a planned U.S.-backed Ukrainian insurgency to bog down and further bleed Russia. The aim is eventually toppling Vladimir Putin from power.  The United States and NATO going to war directly with Russia is definitely not part of the plan. But Nuland and Blinken seem to have missed that memo.

Zelensky and his Washington backers are persisting in building Western public support for NATO intervention until it wears down the realists. Western media accept without question the Ukrainian version of events while Western governments and corporations shut down access to the Russian side of the story.

Thus the public everyday sees and reads reports of what appear to be totally unprovoked, gratuitous Russian attacks on Ukrainian civilians.  The latest atrocity being attributed to Moscow is the bombing of a maternity hospital in Mariupol.  Russia’s U.N. Ambassador Vassily Nebenzia told the U.N. Security Council on Monday that Ukraine had cleared out a maternity hospital in Mariupol and set up gun emplacements there. That was four days before the hospital was hit, with 17 injuries and no deaths.

They totally did it. They told the world it was a military target days before they did it.
"The locals said that they forced out the staff of a maternity clinic and they put a firing site at that clinic."
This is UNSC March 7th meeting:https://t.co/mE8dIUKDTl

It is impossible to know exactly what is happening on the ground. Russia says relatively little. But its version is that it only returns fire to Ukrainian units shooting out of populated areas, who are in effect using civilians as “human shields.” Russia says its ceasefires and humanitarian corridors in cities it encircles are being interrupted by nazi militias, especially in Mariupol, home of the Azov Battalion, who are preventing civilians from leaving. Ukraine and the West report Russia is luring the civilians out so they can kill them more easily.

Russia has absolutely nothing to gain from unprovoked killings of civilians, and everything to lose. Ukraine has NATO involvement to gain with the appearance of such killings.  So far the U.N. High Commissioner of Human Rights reported on Friday 549 civilian deaths and 957 injured in the first 15 days of the Russian operation, numbers that pale in comparison to the first days of the 2003 U.S. campaign in Iraq, for instance, when 15,000 people were believed killed, 4,300 of them civilian. In the 15 days of war, 1,756 peopled died from Covid-19 in Ukraine, according to World-O-Meter.

Nuland’s answer under oath to Sen. Marco Rubio on Tuesday appeared to confirm the U.S. has biological weapons in Ukrainian labs. Rubio asked her point blank whether Ukraine had biological or chemical weapons. A very uncomfortable Nuland answered that Ukraine was conducting “biological research” and the U.S. was worried “materials” would fall into Russian hands.

Ukraine has "biological research facilities," says Undersecretary of State Victoria Nuland, when asked by Sen Rubio if Ukraine has biological or chemical weapons, and says she's worried Russia may get them. But she says she's 100% sure if there's a biological attack, it's Russia. pic.twitter.com/uo3dHDMfAS

It is hard to imagine she was worried about Russia seizing experimental vaccines or blood samples. She may be referring to gain-of-function research on pathogens that National Institutes of Health Director Anthony Fauci testified could have a “dual use” purpose — both civilian and military. Here was Nuland apparently twice spilling the beans: the first time speaking on an unsecured telephone about U.S. plans for the 2014 coup in Kiev. And now about U.S.-funded bio research in Ukraine.

Damage control was clearly in order. First the White House scrambled to say Russian charges that the U.S. was running bioweapons research near the Russian border was “absurd” and “preposterous.”  Then the Pentagon explained that these may be leftover pathogens from Soviet days and were part of a U.S. program begun 30 years ago to destroy WMD in former Soviet republics.   That was the explanation of Robert Pope, the director of the Cooperative Threat Reduction Program, in the Bulletin of the Atomic Scientists. He said: “Scientists being scientists, it wouldn’t surprise me if some of these strain collections in some of these laboratories still have pathogen strains that go all the way back to the origins of that program.”

But documents on the website of the U.S. embassy in Kiev show the U.S. paid for and opened new labs in Ukraine as late as 2019.

Now the U.S. reaction to Nuland’s revelations has turned more sinister. Keep in mind the U.S. hadn’t uttered a word about Russia using bio or chemical weapons in Ukraine until Nuland opened her mouth. Now the U.S. is putting out the word that these Soviet-era pathogens may be used by Russia in the current conflict. Rubio set that ball rolling when he asked Nuland that if these weapons would be used, was there any doubt Russia would be the side using them. (It was a backhanded admission the U.S. and Ukraine have them too).  She said: “There’s no doubt in my mind” it would be Russia.

One can just as easily say that what Ukraine and the U.S. does is what they accuse others of. The United States is the undisputed champion of projection. Russia would have everything to lose with such an attack, while Ukraine and the State Department would have the strongest argument yet for NATO intervention.

Western military analysts themselves concur that Russia will eventually win the war on the ground. That could end with Ukraine accepting the terms dictated by Russia and minimizing the bloodshed, or it could face the wrath of a worryingly much stronger military attack from Russia.  If Ukraine finds a way to draw NATO in, the consequences could be unimaginable.

74 comments for “On a Knife’s Edge in Ukraine”