The U.S. has declared that Donbass is different. How it is different, nobody will say, because you are not supposed to ask, writes Vladimir Golstein. 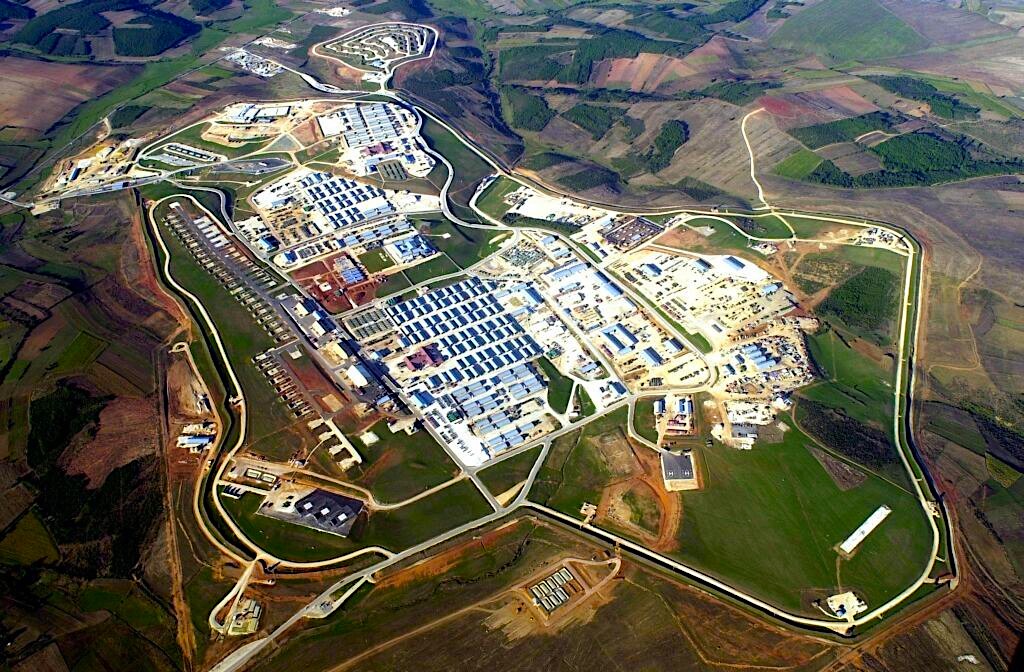 There once was a country called Yugoslavia. It was a multi-ethnic, multi-religious federalist country, rather prosperous by Socialist standards, and consisting of proud people who stood up to Adolph Hitler and even Joseph Stalin.

There were intermarriages, great food, and great films too. And then the West — once the Soviet Union began to collapse — decided that it was Yugoslavia’s time to collapse too. It would no longer be a country but the land of ancient Balkan hatreds. And they began to foment them and foment them, blaming one republic in particular: Serbia.

Serbian villains were blamed for slowing the rapid European integration of all the other republics, which began to declare their independence. This independence — Slovenia, Croatia and so on — was quickly embraced by the West. Germans were there first, trying out their new role as the masters of Europe, so all these republics were eventually recognized and then — since the population was mixed — civil strive began within each newly, independent republic.

Serbian minorities from every republic began to be harassed and kicked out. All this was condoned and supported by the West, which started a new narrative: great separatists, bad Serbians. [The Clinton administration, including then U.N. ambassador Madeleine Albright, gave a green light to Croatia to ethnically cleanse a quarter of a million Serbs from the Krajina region. Years later, angry Czechs in solidarity with Serbs, confronted Albright at a book signing in Prague. She called them “disgusting Serbs.”]

Those who remember, can recall wars, and bombing and propaganda campaigns. In 1999, NATO intervened militarily to help the largely ethnic Albanian Kosovo gain its independence from Serbia. The autonomous province of Kosovo had voted 99 percent in favor of independence in a 1991 referendum. Eight years later NATO was bombing Belgrade on its behalf.

The U.S. charged the Serbs with ethnic cleansing, but one study suggests the Kosovars fled Serbia en masse only after NATO started bombing. Today neither the Council of Europe, nor the United Nations recognizes Kosovo’s independence, though the United States does. The U.S. then built its largest and most expensive European military base in Kosovo.

I was invited during the NATO campaign to participate at a panel named “Kosovo and Moral Responsibility” organized by Yale Hillel with two other participants. One was the most respected Yale professor who demanded more bombs be directed at Serbia. She constantly made references to Munich and the appeasement of Hitler in regard to the Serbs.

When I muttered something about Serbian children found dead next to their teddy bears in a train falling from a bridge bombed on the order of Bill Clinton, I was accused of demagoguery by that famous professor, who began to rhapsodize about the beauties of Dubrovnik in Croatia, threatened by the evil Serbs. 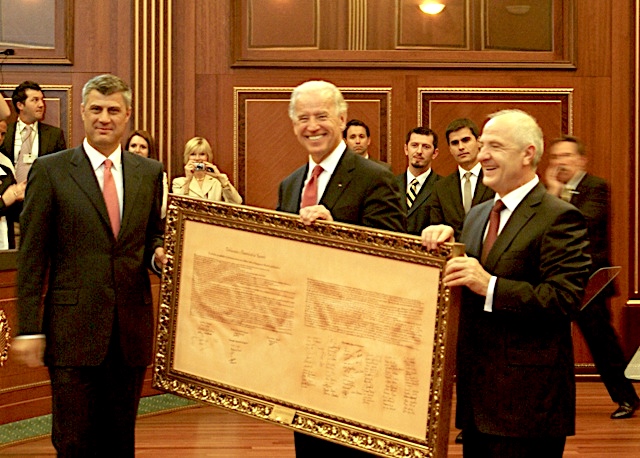 Hashim Thaci, then U.S. Vice President Joe Biden and Fatmir Sejdiu with the Declaration of Independence of Kosovo, May 21, 2009. (Office of Prime Minister of Kosovo)

Somehow, it became a moral responsibility of the West to wrest the ancient Serbian lands with its thirteen century Orthodox monasteries to give to Albanian gangsters from the Kosovo Liberation Army (KLA), who the U.S. once branded as terrorists and who became infamous for selling Serbian body parts to western buyers.  Their leader was Hashim Thaci, pictured above with Joe Biden, who later became president of Kosovo.

In 2014, after the U.S.-backed violent coup that overthrew Ukraine’s democratically-elected president, the coup regime outlawed the Russian language and neo-Nazi gangs began attacking Russian speakers, including burning dozens of people alive in a building in Odessa. Twelve days after that incident, the largely ethnic-Russian oblasts of Lugansk and Donetsk declared independence from Ukraine.

Like in Kosovo, both provinces held referendums that returned overwhelming majorities for independence. Kiev responded by launching a war against these Russian speakers who the regime called “terrorists.”

Well. Where was the United States, Germany and other progressive European countries, when Donbass declared their independence? Nowhere, of course, as these republics were immediately dismissed as separatists and Russia-backed guerrillas, in addition to terrorists. Where were the Yale professors wringing their wrists about moral responsibility toward the Donbass people? Where are the endless articles about Ukrainian atrocities, bombing of schools and hospitals, displacing millions of people? That’s right! Nowhere! Why?

Because Uncle Sam said so. He declared that this is different. How it is different, nobody will say, because you are not supposed to ask. It is different, end of story, and if you ask questions, you are a Russian stooge.

We can recognize Slovenia and Macedonia, but not Novorossia or Donetsk. It is different. One is supported by NATO, another by Russians. Don’t you see the difference? I don’t. Nor do the millions of others who remember what Germans, Americans, Brits or the French once did to their countries.

So yes, New York Times and The Guardian, Joe Biden and Boris Johnson. Start your campaign again. Declare the illegality of recognizing breakaway republics, denounce evil Russians hell bent on invasion and do your usual stuff by parading fake authorities who’ll pontificate on the Moral Responsibility of denying Donbass its safety and freedom. You ain’t fooling anyone who is not willing to be fooled. 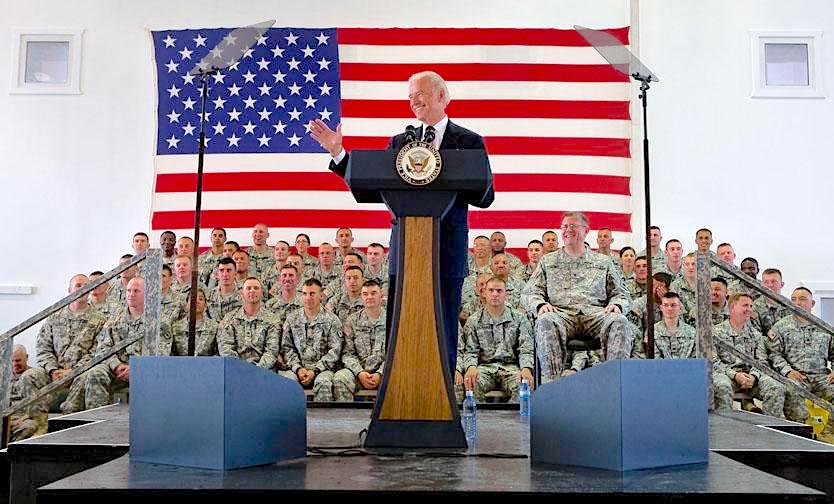 Vladimir Golstein, a former associate professor at Yale University, is chair of the Department of Slavic Studies at Brown University and is a commentator on Russian affairs.

54 comments for “What Is the Difference Between Kosovo & Donbass?”