Russia was condemned at the U.N. Security Council Monday for recognizing the independence of Lugansk and Donetsk and sending in troops for what it called a peacekeeping role. Germany put a stop to the Nord Stream 2 pipeline. 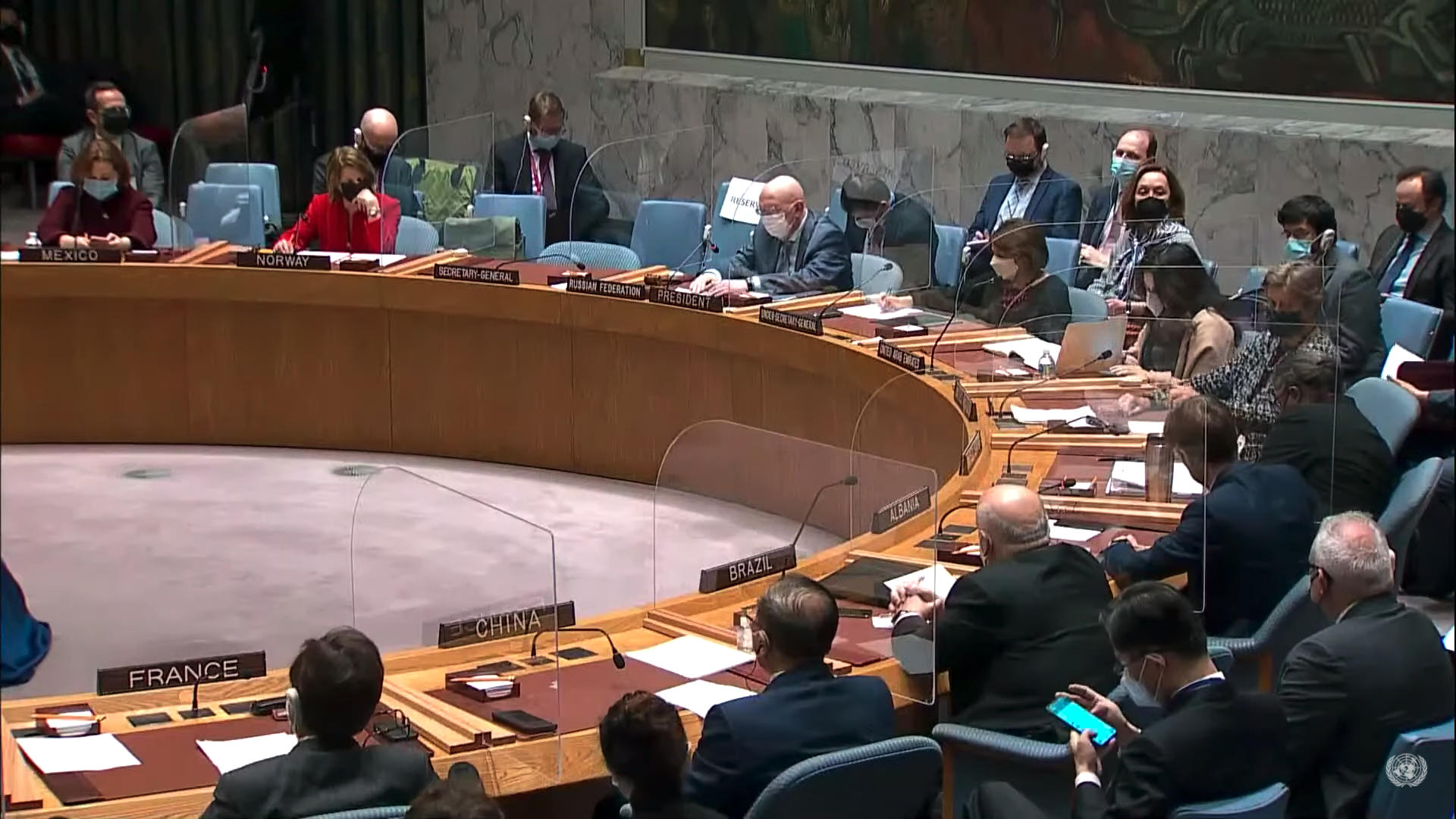 Members of the U.N. Security Council, the European Union and the U.N. secretary-general on Monday condemned Russia’s decision to recognize the Donbass areas of Lugansk and Donetsk as republics independent of Ukraine and to send Russian troops into the enclave in what Moscow said was a peacekeeping role.

Russia responded to a surge in violence in the Donbass over the past few days in what Moscow said was a Ukrainian government offensive. At the U.N., Secretary-General Antonio Guterres said that he considered “the decision of the Russian Federation to be a violation of the territorial integrity and sovereignty of Ukraine and inconsistent with the principles of the Charter of the United Nations.”

At an emergency Security Council meeting called by Ukraine Monday night, U.S. Ambassador Linda Thomas-Greenfield called Russia’s moves an “attack” on Ukraine that is “clearly the basis for Russia’s attempt to create a pretext for a further invasion of Ukraine.”

She said the sanctions against Donbass enclaves had begun:

“President Biden issued an Executive Order today that will prohibit new investment, trade, and financing in the so-called DPR and LPR regions. Tomorrow [Tuesday], the United States will take further measures to hold Russia accountable for this clear violation of international law and Ukraine’s sovereignty and territorial integrity. But we and our partners have been clear that there will be a swift and severe response were Russia to further invade Ukraine.”

Politico reported that the “White House avoids the ‘I’ word.”  It quoted a White House official who “wouldn’t call the move an invasion, however, saying ‘Russian troops moving into Donbas would not itself be a new step. Russia has had forces in the Donbas for the past eight years’” — which is itself a questionable assertion.

The White House reaction brought howls of protest from Republican members of Congress who see the Russian move as an invasion and want the full complement of sanctions to be imposed, Politico reported.

British ambassador Barbara Woodward did utter the I word at the Security Council:

“The actions Russia has chosen today will have severe and far-reaching consequences. First, to human life: an invasion of Ukraine unleashes the forces of war, death and destruction on the people of Ukraine. The humanitarian impact will be terrible on civilians fleeing the fighting.”

It is too early to tell what impact the introduction of Russian troops into Donbass will have on the upswing of violence there. Will Ukrainian government forces shell Russian units and risk a severe retaliation? Or will the Russian presence bring calm?

Russian President Vladimir Putin’s moves on Donbass have alienated France and Germany, European powers that had at least understood Russia’s security concerns in relation to NATO’s eastward expansion.  Perhaps Putin had concluded that Paris and Berlin were hopelessly in the American camp and certainly that the Minsk process was already dead after Kiev’s failure to implement it.

On Tuesday, German Chancellor Olaf Scholz put a stop to certification of the new Nord Stream 2 gas pipeline with Russia, “The situation today is fundamentally different,” Scholz said in Berlin. “We must re-evaluate this situation, in view of the latest developments. By the way, that includes Nord Stream 2.”

Macron had brokered a summit between Putin and U.S. President Joe Biden, a summit that will unlikely go ahead. “By recognizing the separatist regions of eastern Ukraine, Russia is violating its commitments and undermining Ukraine’s sovereignty. I condemn this decision,” Macron said on Twitter.

By recognizing the separatist regions of eastern Ukraine, Russia is violating its commitments and undermining Ukraine's sovereignty. I condemn this decision. I called for an emergency meeting of the UN Security Council and European sanctions. https://t.co/byPBhpZGCV

Russia was effectively isolated on the Security Council. For instance, Kenya’s representative drew on colonial history, including the drawing of African borders by European colonial powers, to condemn Russia’s actions.

Even China did not endorse Moscow’s move. In a 134-word statement, its ambassador only called for restraint of all the parties.

Russian Ambassador Vassily Nebenzia offered an explanation to the Security Council about Moscow’s decisions.  He said Minsk could be revived if the U.S. got Kiev to implement it.  “We remain open for a diplomatic solution, but we will not allow for another bloodbath in Donbas,” he said.

“While propagating this baseless panic in the recent weeks around Russia’s alleged plans for an imminent invasion of Ukraine, our Western colleagues shamelessly pumped Ukraine with arms and instructors. In fact, they have been encouraging Ukraine that pulled 120,000 troops to the contact line, to embark on armed provocations against Donbas.

This past weekend, Ukraine drastically intensified fire against residential areas of the LPR and DPR. Reportedly, up to 1,600 projectiles were launched, killing civilians. Several sabotage groups set foot in the republics and blew up or attempted to blow up critical infrastructure facilities.So it became obvious that Donbas was about to face another Ukraine’s military venture, as was the case in 2014 and 2015. We cannot let this happen.”

Russian President Vladimir Putin had resisted for eight years recognizing the independence of the self-declared republics of Lugansk and Donetsk in the Donbass, insisting instead that Kiev implement the 2014-15 Minsk agreements that would have given autonomy to the provinces, while they remained within Ukrainian territory.

The decision by Putin effectively declares that the Minsk process is over.

It does not mean at this point, however, that the people of Lugansk and Donetsk are ready to hold a referendum to join Russia or that Moscow is interested in making them part of Russia, as happened in Crimea in 2014.

The two provinces declared independence after the 2014 U.S.-backed coup in Kiev that overthrew democratically-elected President Viktor Yanukovych, who fled the violent capital to the Donbass, his base of support, exactly eight years ago Monday, on Feb. 21, 2014. On the next day Parliament, with only opposition leaders present, impeached him.

After anti-Russian language laws were passed by the coup government, hand-picked before the coup by the United States, and after neo-Nazis burned dozens of people alive in a building in Odessa on May 3, 2014, both Lugansk and Donetsk declared independence nine days later on May 12.

The coup government launched a civil war against the separatists, whom they called “terrorists.” In essence the Donbass was defending their democratic rights to vote, as a majority of the region voted for Yanukovych, in an election certified by the Organization for Security and Cooperation in Europe (OSCE). In the eight years since, as many as 14,000 people have been killed in the fighting.

With increased shell fire from the government side, according to the OSCE, into the enclaves in recent days, Putin was faced with the decision of whether to abandon the people or risk world condemnation and U.S. and European sanctions and send in Russian forces to protect them.